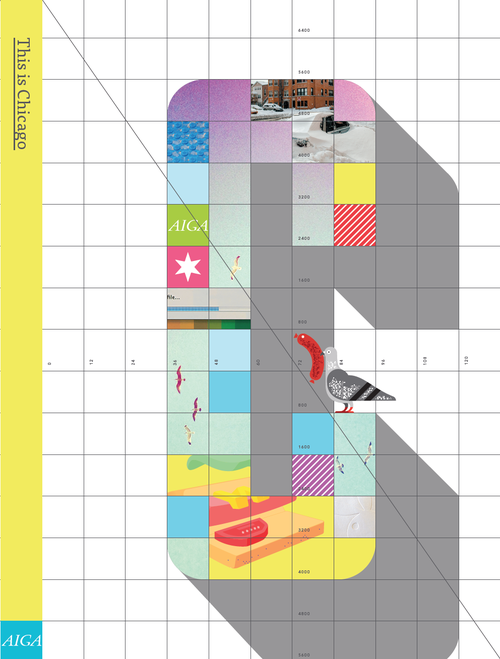 New York is bound to advertising and finance. Los Angeles to entertainment. San Francisco to tech. Chicago doesn’t settle on a single industry, but it is, and always has been, industrious.

Design in Chicago follows this credo. Designers here go beyond graphics. They move fluidly between disciplines, fostering camaraderie and rivalry, collaboration and discussion. They roll up their sleeves and get things done, and they want the rest of the world to know it.

“One of the things I realized early on is that Chicago is a quintessentially American city. It doesn’t pretend to be anything other than what it is,” writes Zoë Ryan, chair and curator of Architecture and Design at The Art Institute of Chicago, in “This Is Chicago,” a new book published by the city’s AIGA chapter on the occasion of the professional association’s centennial year. (The organization was founded in 1914 as The American Institute of Graphic Arts.)

“This Is Chicago” doesn’t aim to be an all-inclusive, authoritative collection of the city’s design elite, but a snapshot of an eclectic community at a specific point in time. The mix of interviewees includes legendary Playboy art director Art Paul, Struggle Inc. founder Cody Hudson, Studio Blue partner Cheryl Towler Weese, Bart Crosby of Crosby Associates, Max Temkin and Emily Haasch of Cards Against Humanity, Richard Wright of Wright Auction House, Nick Butcher and Nadine Nakanishi of Sonnenzimmer, John Massey of Container Corporation of America and the Center for Advanced Research in Design, among numerous others.

While the book is big on talent, it’s far from a starstruck round-up heralding creative genius: it’s about real people doing real work, where they find inspiration, why they chose Chicago and how they want it to change.

AIGA’s Chicago chapter has been active since 1986, but they’ve been celebrating the national organization’s one-hundredth anniversary since last summer with a year full of events, lectures, panels and shows all focused on the “This Is Chicago” theme. The book contains selections from last summer’s “This Is Chicago” poster show of one-hundred designs from one-hundred local designers, a nod to this publication serving as the capstone to a year of centennial-themed happenings.

The launch party for the book, at Redmoon Theater on June 18, was the finale, packed with immersive vignettes of all of its profiles: a Playboy bunny actress posing in a “stag room” papered with vintage pin-ups in homage to Art Paul, a giant paper sculpture by INDO, and a life-size geometric model of John Massey’s iconic 1965 “Chicago Has A Great Lake” poster, to name but a few.

“We had been toying with the idea of a big annual event for the community as a whole, one that would encourage everyone who loves design to come,” says Valerie Craig, AIGA Chicago’s programming co-chair who led the event planning.

The night, in addition to serving as the book’s public reveal and AIGA Chicago’s annual meeting, also marked leadership transitions for the chapter: Sara Frisk finished her tenure as co-president, as Mig Reyes joined Alisa Wolfson in the role.

“The Chicago design community is so big and so small at the same time,” says designer and printmaker Alex Gilbert, who attended the launch. “For a city of three million, it’s the most supportive I’ve ever been a part of.”

It’s a sentiment that is echoed everywhere within the book. With pages of graphics of hot dogs and sailboats mixed in with headshots and portfolio greatest hits, the title showcases the possibilities for designers working in the city, but leaves it to the reader to make the connections and find the answers. Much like Chicago, it’s humble but full of passion.

“This is Chicago” is available for purchase via thisischicagobook.com.