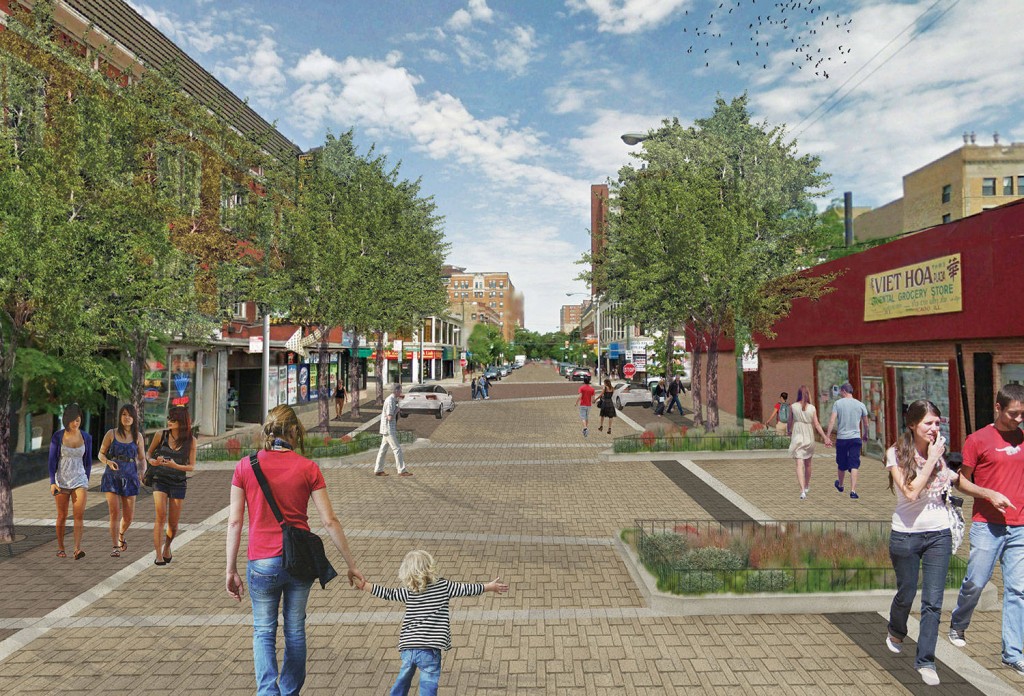 A rendering of Argyle as a shared street/Courtesy site design group, ltd..

Chicago is about to get its first—official—shared street. By this time next year, Argyle Street, in the 48th Ward on the city’s North Side, will be a streetscape that relies on human interaction to negotiate the flow of pedestrians, bikes and vehicles, rather than relying on standard traffic signs and signals.

In this experiment, Chicago joins cities around the world—in the Netherlands, Australia, New Zealand, Britain, Germany, as well as other American cities—in enhancing a thoroughfare that draws foot traffic, like Kensington High Street in London, Bell Street in Seattle and Pittsburgh’s Market Square, into a pedestrian- and bike-friendly destination. Construction on the project, five years in the planning, began in early July.

The shared street concept, or “woonerf” in the Netherlands where the current incarnation was introduced and advocated by Dutch traffic manager Hans Monderman, is achieved by eliminating most markers typically associated with traffic control. Shared streets use a more open or flexible design plan than conventional traffic-management techniques such as traffic signals and signs, curbs, designated traffic lanes and walkways. The shared street requires individuals to pay attention to their surroundings—not just to the mechanical or inanimate arbiters of traffic control such as traffic lights and stop signs—but to one another.

Video of the center of Leeuwarden, the Netherlands

The dynamic of shared streets enhances one’s awareness of space, requires eye contact and elicits interactive gestures. Rather than passively and impatiently waiting at a traffic light, on foot or in a vehicle, or zooming ahead heedless of everything but the next light at the next intersection, shared streets require users to make conscious decisions engaged with others on the street. Studies, such as those conducted by Danish architect Jan Gehl, indicate that shared streets are less congested, have fewer accidents, are more profitable for area merchants, and are more peaceful, pleasant places.

In Chicago, Argyle Street will follow the model used for Bell Street in Seattle. Street-level pavement will be raised six to eight inches. A bicolor mix of unit and permeable pavers—including tactile paving to aid people who are visually impaired—will replace the pavement and sidewalk. With no curbs and no separation between sidewalk and street, Argyle will take on the character of a plaza.

Delivery vehicles, shoppers and diners are central to business activity on Argyle Street, and the decision was made to maintain limited parallel parking spots. Nearby parking lots will also accommodate people traveling by car. To make it difficult for drivers to exceed the fifteen- to twenty-mile-per-hour speed limit, the street will be chicaned—which is to say there will be a zig and a zag to the travel lanes, bordered by parking and plantings, that will remove the straight-shot conducive to acceleration.

Sounds great in theory, but how well does this actually work, especially in urban centers like Chicago, where “driving” and “sharing” can barely occupy the same sentence? In fact, shared space does present risks and has its opponents. In Britain, for example, advocates for people with visual and hearing disabilities, as well as organizations representing cyclists, often oppose shared space, which eliminates the signage, barriers and directives that designate areas and routes free of and safe from vehicular traffic. In actuality, opponents say, pedestrians, cyclists and cars don’t share space: cyclists and pedestrians, especially older people who feel vulnerable, routinely yield.

Less than ideal: shared space in Assen, the Netherlands

Despite the risks and learning curve, the time to introduce a new way of wayfaring to Chicago has come. At a public meeting on June 30, 48th Ward Alderman Harry Osterman and Hannah Higgins, of site design group and project manager for Chicago Department of Transportation, discussed the new shared street. Alderman Osterman noted three components essential to the success of a community project: simplicity, community support and programming.

Adding the alderman’s visionary leadership to the project’s practical simplicity, the area’s engaged community, and programming like Argyle’s Thursday Night Market, this shared street seems likely to be a winner.

Working well: shared space in the German town of Bohmte