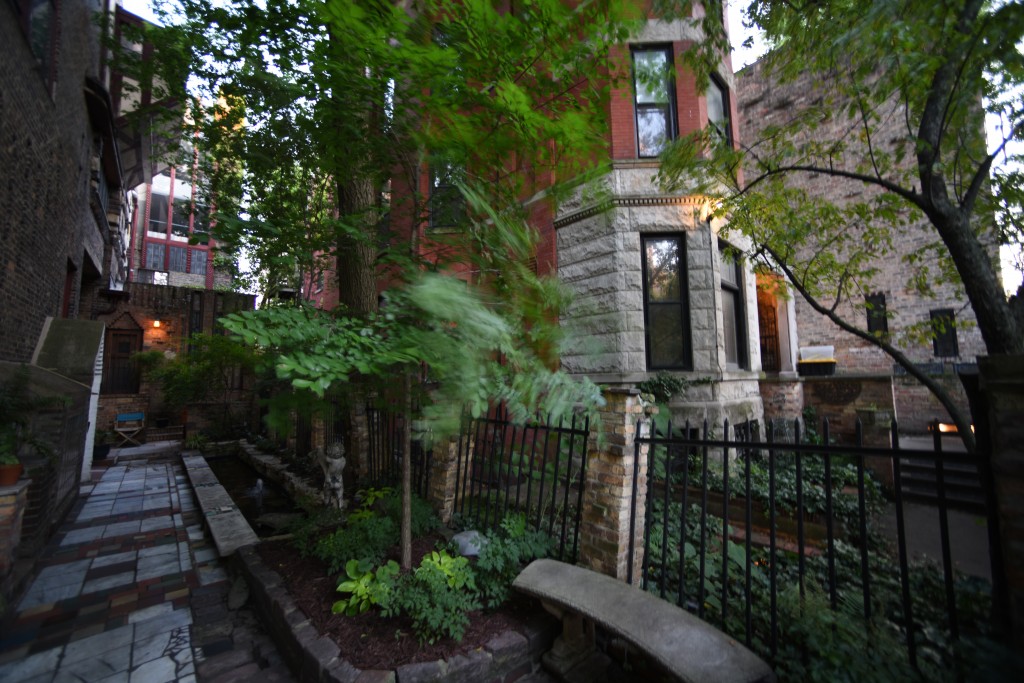 The building in question is a late-nineteenth-century Victorian home at 159 West Burton Place, nestled between LaSalle and Wells Streets. What this building is not is a contemporary multi-unit condominium building. Unfortunately, in the bustling housing market of the Gold Coast, that is a problem. But the plot thickens. Not only is this home historic in its own right, it sits on one of the most unique blocks in the city, and its demolition is now threatening this block in more than one way.

Historically a cultural factory for the city, Burton Place is home to a handful of bespoke Modernist residences including the Carl Street Studios and Andrew Rebori’s 161 West Burton Place. Most noticeably defined by the fantastical brick and tile work, and intricate stained glass of the enigmatic Edgar Miller, the Carl Street Studios were built, expanded and ornamented for more than a half century by its residents.

Spreading out from this single block, the neighborhood was once a bohemian enclave of hundreds of artists, architects, actors and writers. The area was a little Left Bank on the Near North Side, the traces of which are still apparent in the one-off designs and details throughout the neighborhood’s dense housing stock. 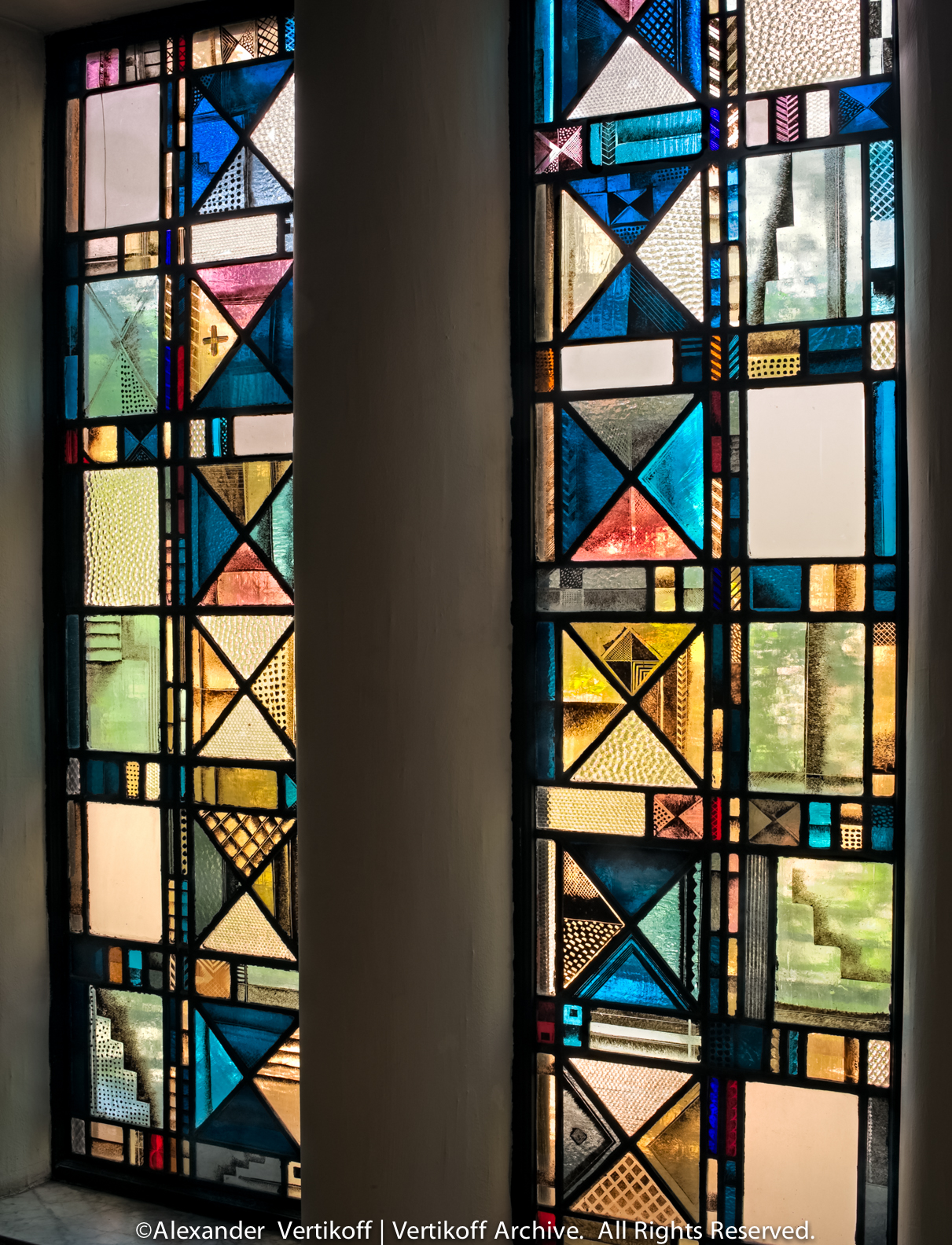 Today, this unique bit of Chicago’s cultural fabric is in danger due to the impending demolition of its neighbor, 159 West Burton Place, by a housing developer. The danger is not from something new or different being built at 159—the whole street, the whole neighborhood was founded on new and different. The danger is from the very act of removing the interwoven building from its site. There is an unsettling likelihood that the removal of 159 will cause a shift in the very foundations of neighboring structures. Even the slightest shift could spell disaster for the hand-leaded stained glass and ornately laid brick and tile of 155 and 161 West Burton. All of which is irreplaceable.

So why do we care? From a legal standpoint this situation is one of property rights. The developer owns the land, has applied and was granted a permit to demo, and is fully within his/her rights to do so. From any other point of view, this is a dilemma of civic consciousness. It is about being aware of the impact one has on their neighbor, and understanding that any action taken in a city has an effect on someone else.

This is part of the social contract of living and working in a city. It is this same social contract that compels us to do such simple acts as giving up a seat to the elderly, or cleaning up after one’s dog, as well as louder actions such as speaking up for social equality, voting in local elections, and not indiscriminately destroying our neighbor’s homes. In this case, the offense is against our built environment, the history it embodies, and those who call a very unique neighborhood home. Yet it is on all of us to confront those that are not actively working to make our city a better place, whether the context is the whole city or a single block.

The outcome of the Burton Place saga has not yet been decided. While the demolition permit has been granted,  the Commission on Chicago Landmarks met on Thursday, August 6 and voted unanimously to move forward The West Burton Place District for landmarking review. Although a landmarking of the district would not necessarily prevent the demolition, any building and demolition permits would have to go through the commission for review. Essentially, a codifying of the landmark district could negatively affect the developer’s plans, drawing much increased scrutiny from the landmarks commission. As this article went to press, 159 West Burton Place is still intact. 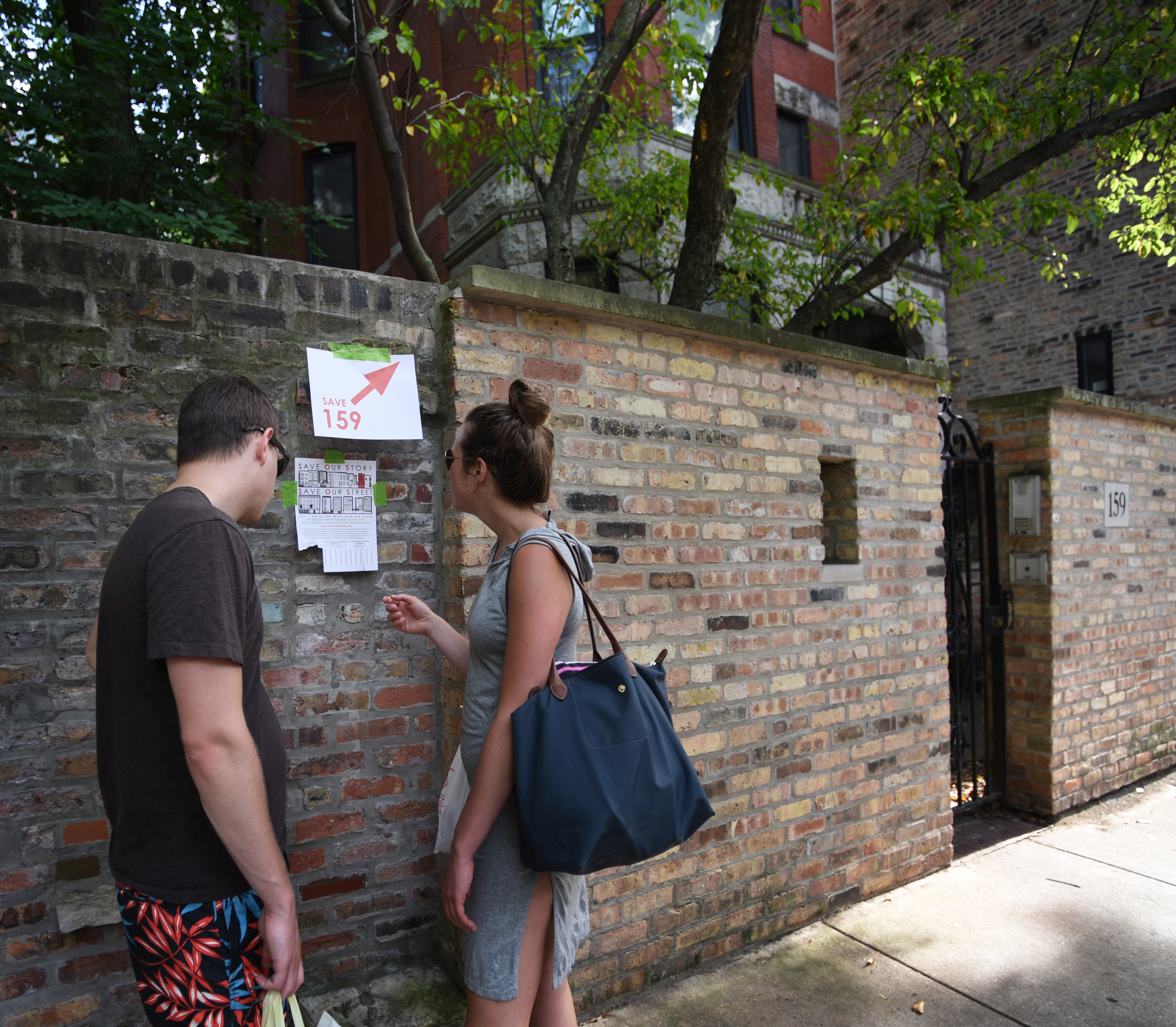 Save Our Street signs adorn wall between 155 and 159 Burton Place. Photo/Lauren Whitney

A petition has been set up as well as a general call from the creative community to draw attention to this issue in the press and on social media. Take a moment to learn about the history and legacy of Burton Place, and voice your concern at www.sos-saveourstory.org.