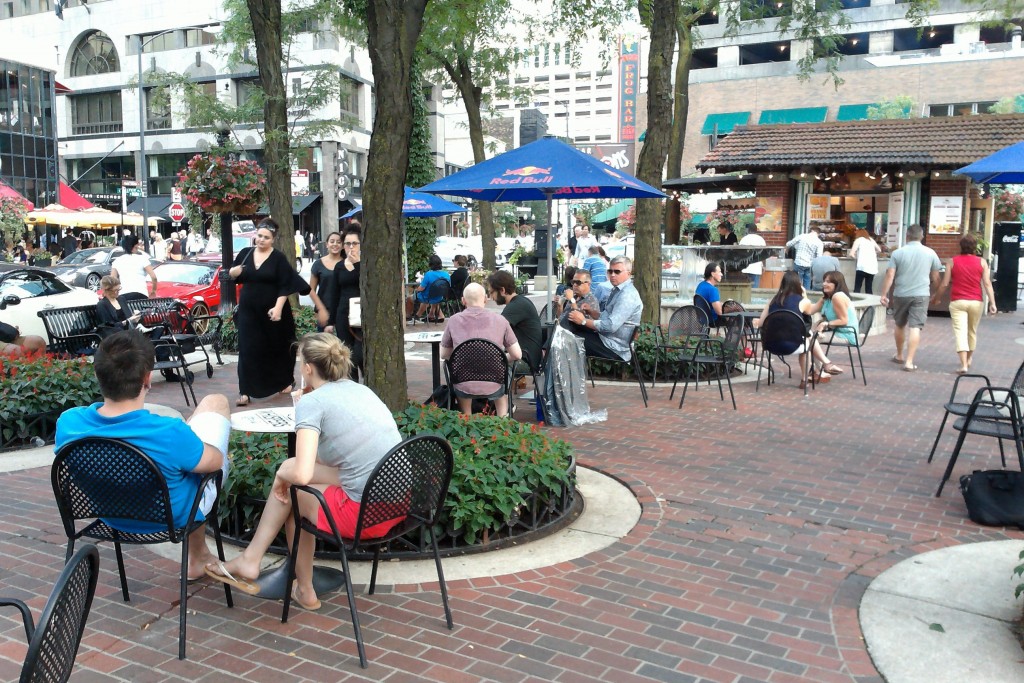 It is 8:40am on a warm summer Wednesday at Mariano Park on the Near North Side.  Tables and chairs are being set up and it looks like the hardscape (most of the park is paved, with small areas around the trees planted with flowers) has just been washed.  There are about two dozen people in the park.  The fountain is on and Whispers Café, housed in a small Prairie School-style kiosk, is open. Five or so patrons are waiting at the window. At the tables and benches, there are parties of one, two and three people, ages ranging from the twenties into the seventies. People are reading, talking on the phone or speaking with each other.

I understand that the Chicago Park District may be negotiating a new lease for a concession at Mariano Park.  I understand, from the Whispers Café’s Facebook page, that the new lease calls for a much larger commercial presence than today.  Mariano Park works well, and the factors for its success should be maintained.

When I was a kid and my family had just moved to Streeterville in 1977, Mariano Park was not very lively, its kiosk unused. It was, effectively, what it is:  a leftover space formed by the intersection of Rush and State streets. Despite the underused park, the area was, as it is today, still very active, with restaurants and drinking establishments.  What was then called the “Herpes Triangle” has more recently been called the “Viagra Triangle,” in reference to the aging but still ever-so-social population.

Some years ago, a succession of seasonal cafes was operated out of the small kiosk. In the years during which these businesses have been in operation, and because of them, Mariano Park has become one of the best small public spaces in the country of which I am aware.

Mariano Park’s success is, like many things, fortuitous: it is located in a densely populated neighborhood that sees a high number of visitors and is home to successful bars and restaurants. When it is nice outside, day or night, Mariano Park is busy with a wide range of people. Some of them are customers of the café. Many are not.

A few blocks to the south, on a similarly sized plot of land also formed by the intersection of Rush and another street—Wabash—is Connors Park.  This park is not as successful. A number of years ago, the only users I would notice would be an occasional homeless person. I assume that in an attempt to improve the overall use of the park and to generate some income for the Chicago Park District, a structure was built in the park, which currently houses an Argo Tea. 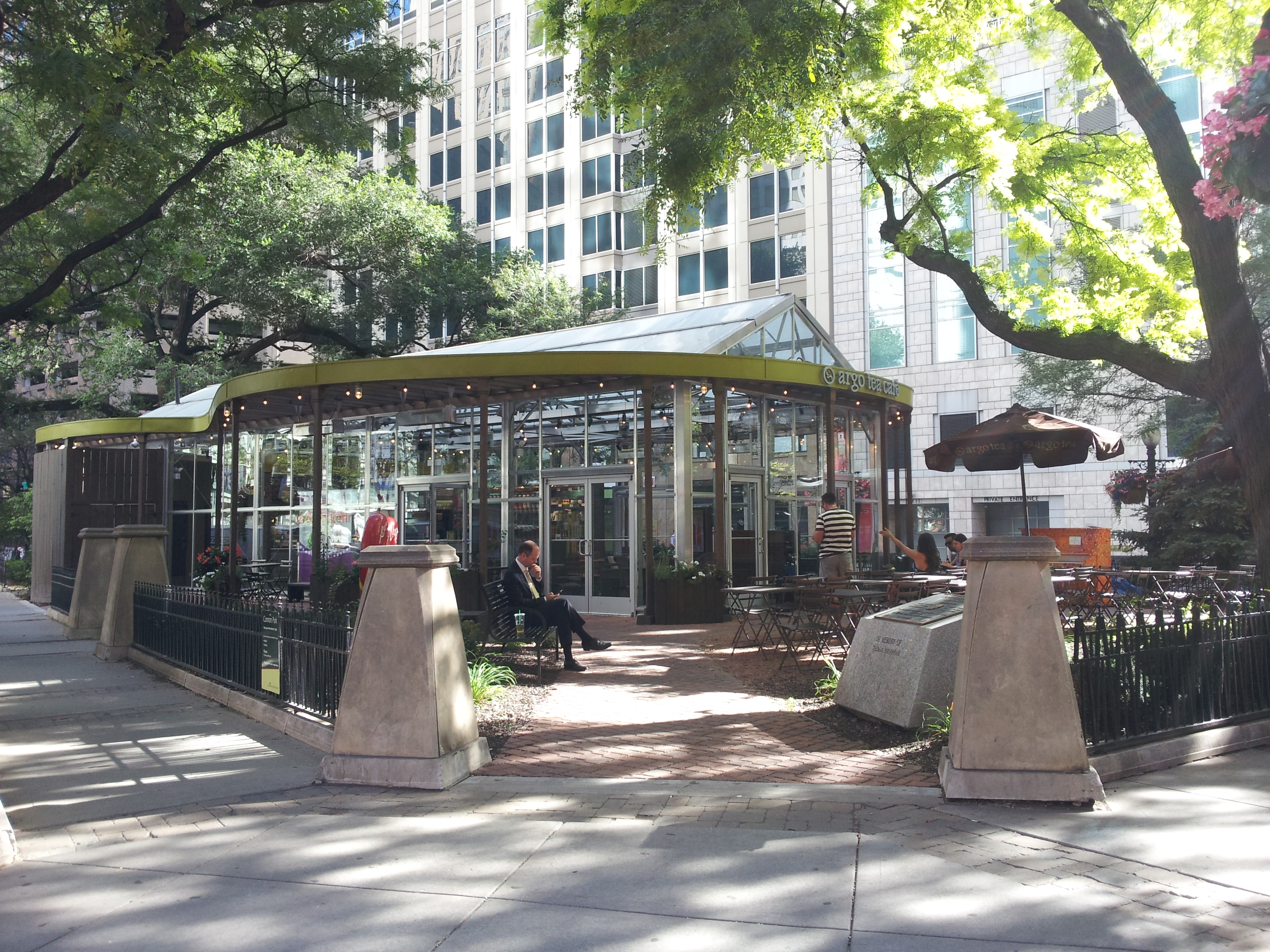 It is 6:20pm, on a high overcast warm Wednesday evening. I just passed Connors Park. There were approximately twenty people in front and on the sides of Argo Tea. There was one person on the “back side.”

At Mariano Park, within my view, there are fifty people seated or standing.  Another seven or so are walking through. I cannot see how many people are seated on the other side of the kiosk. There are larger groups of people than this morning: more groups of two or three and larger. There is a seemingly homeless man walking about. A policeman is standing on the corner, drinking.  There is a couple with a baby.  The population is younger than this morning, but not by much. There is at least one dog in the park.

At Mariano Park, there is a lot to see: the passing traffic, people coming and going to restaurants and bars (even people waiting for tables or for the valet to return with their cars can be interesting), and the people in the park itself. A joy of urban living is of seeing strangers outside one’s narrow social circle, be they police, gangsters, professional athletes, or sugar daddies and mommies.

Comparing Mariano and Connors parks helps to clarify why the former is more successful as a public space. The proportion of commercial to public space is such that anyone can feel welcome to use it, without obligation to make a purchase. The kiosk is small enough that it is clear that the public space is, indeed, public. Its small size means that the commercial transaction, in itself a kind of entertaining activity, takes place at the window, within the public sphere. There is also no dead “back of house,” as with the larger Connors Park structure.

The quality of the experience in Mariano Park is directly related to the scale and style of its commercial presence and management. The much larger structure at Connors Park has become an obstacle to turning it into a successful public space. I hope that the current approach at Mariano Park will continue, so that it may remain a model of how a small, understated, “leftover” space can be a lively, community living room.