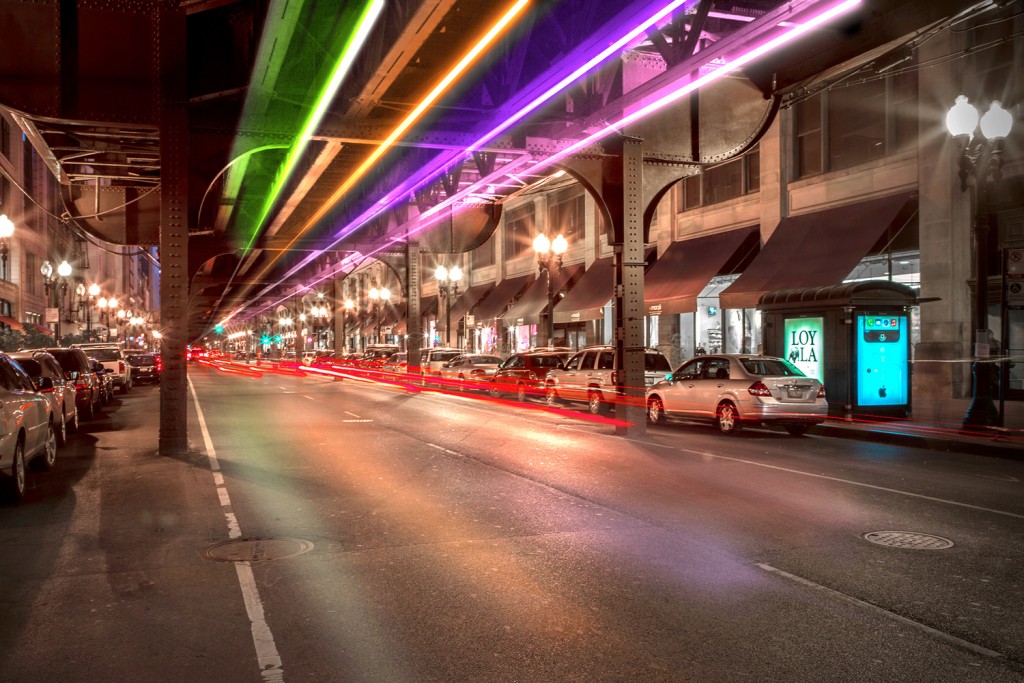 Jack C. Newell and Seth Unger are the first to admit they aren’t fine artists; they’re not even, in the strictest sense, “designers.”  Yet they are behind one of the most promising public art/design projects in recent memory. “The Wabash Lights,” their ambitious proposal for a site-specific lighting installation affixed to the underside of the Wabash Avenue El tracks between Madison and Adams Streets, calls into question our very definitions of art and design while adding new dimensions to the idea of crowdsourcing.

The Wabash Lights will consist of four strings of  continuous LED tubes in four-foot sections comprised of Philips brand I-color Accent MX Powercore lights, which can be customized and programmed in 1.2 inch segments to display an infinite variety of colors and kinetics. The still photographs accompanying the project’s Kickstarter proposal illustrate its obvious appeal: imparting a dramatic, even magical glow to the gloomy Wabash streetscape both by day and at night. But beyond its simple visual impact are its admirable conceptual underpinnings: the organizers say it’s all about maximizing the inclusive aspects of creation.

The installation aspires to be the consummate crowdsourced event: each of its sequences or “snapshots” will be devised by a member of the public who creates a design from anywhere in the world through the project’s website.

The project is reminiscent of the Bay Lights installation that graces the San Francisco-Oakland Bay Bridge. Like most art installations, that one is associated with its creator, Leo Villareal, and Unger and Newell are great admirers of his. But as Unger points out, “he’s just one guy, and that’s what most public art is: paid for by a handful of  people and made by one person.” The intent of the Wabash Lights is that it’s for—and by—the public. “The ‘art’ here,” says Newell, “is the interactivity. It gives everyone the chance to be a creator.”

Unger and Newell, both thirty-three, met ten years ago in a Second City improv class. While neither has pursued a career in performance, they both feel their affinity for storytelling has informed their motivation here—plus the desire to affect change. Unger hopes the enhancement to Wabash will help remove the kind of interstitial stigma the street has endured—a negative rap as roughly the local micro-equivalent of “flyover” territory, sandwiched between the grand, monumental presence of Michigan Avenue to the east and the bustling retail energy of State Street to the west.

“We are not lighting designers” is the organizers’ recurring disclaimer. Newell in fact is a filmmaker and Unger works in marketing at the Herman Miller company, but the Wabash Lights is really about a lot more than “lighting design.” (For the actual technical “design” elements, the project has assembled a team of technicians including Intelligent Lighting Creations and Justin Wardell, their chief technical advisor, who has a degree in Theatrical Lighting.)

Earlier this summer, their Kickstarter campaign brought them to their goal of raising fifty-five-thousand dollars to fund a beta version of the project, which will help them mount an actual twelve-to-twenty-foot segment of the intervention, to assess how it will work: how the vibrations of the El and the Chicago weather will affect it, and its impact on street traffic below. They’re shooting for an October installation.

A lot of the details remain to be determined: the design interface has yet to be invented, so it’s unclear how participants will create their sequences, and no decisions have been made about the duration of each sequence or how they would be scheduled.

Depending on a variety of factors, the organizers estimate the cost for the eventual block-long installation at about $5 million. For that, they’ll pursue more conventional funding sources: foundation support, grants and private arts donors.

Chicago, of course, already has an impressive legacy of public art installations, beginning with its spectacular holdings in traditional statues and monuments, from the “Seated Lincoln” through the Chicago Picasso up to the more recent beloved Cloud Gate (aka “The Bean”) and Crown Fountain. Newell suggests that, just as the Crown Fountain represented the cutting-edge intersection of visual technology and public inclusivity in 2004, the Wabash Lights could do the same in 2016. The duo cannot be faulted for lacking enthusiasm. Unger un-ironically offers a vision of the installation as a “Chicago halo shining a light on what’s authentic.”