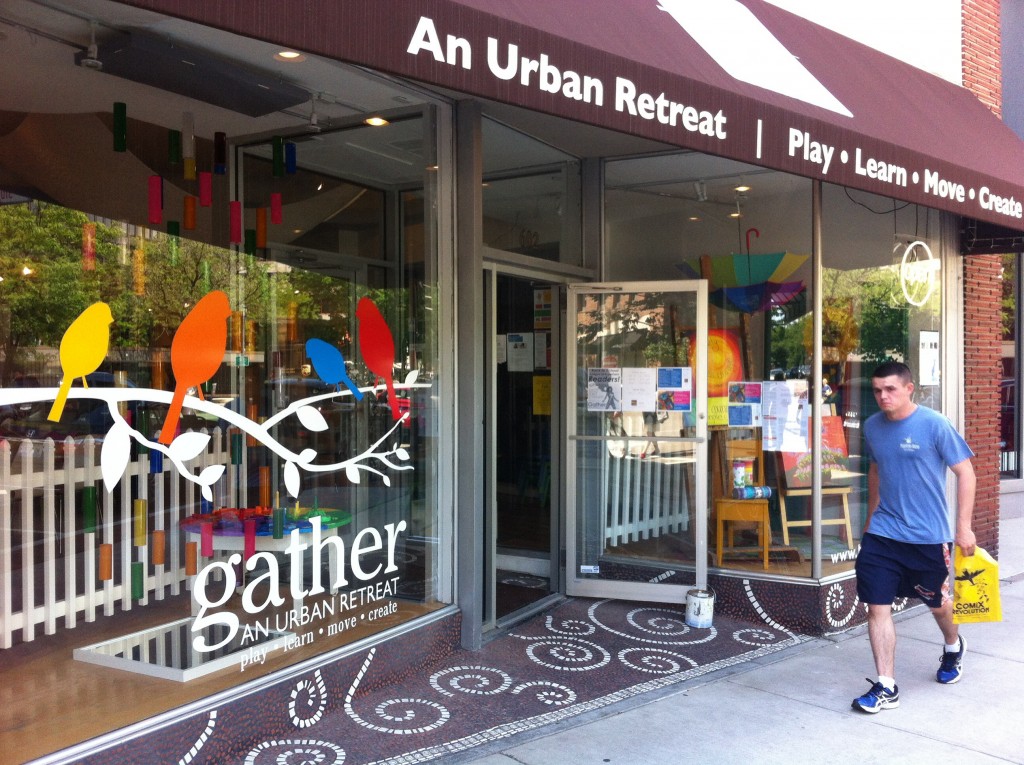 In recent years, numerous spaces have been popping up across the city offering specialized childcare on the maker space model. These outfits encourage learning and creativity, concentrating in neighborhoods with a pronounced density of young parents; the city’s near-northerly neighbor, Evanston, is no exception.

Gather: An Urban Retreat is a bright, airy space filled with bright colors and an Etsy-esque decor. Situated in the bustling student center on Davis Street and Chicago Avenue, the store makes art-making and awareness education its focus. Its mission is that by “providing the time, space, materials and know-how, we remove the barriers and create a pathway to positive creative experiences.” Divided into three different spaces, the separate areas focus are divided by activities and age groups, including a play space with a train table for infants (and on up to eight years old), an arts and crafts studio with a wide range of supplies for helping to spark kids’ imaginations, and a specially sectioned-off area that serves as a quiet room known as “the Nest.” Temper-tantrum time-outs never had it so good.

They offer a range of one-off courses including Spanish-language sessions led by Language Stars (languagestars.com) and puppetry shows from local puppeteer Emily Tucker (emtucker.com). Cannily serving their parent clientele’s informational needs, they also often offer events such as discussion visits from cognitive psychologist Dr. Sue Hespos from Northwestern’s Infant Cognition Lab, and other motherhood-related theme gatherings, including the occasional social to meet, greet and discuss the travails of new parenthood. Gather also feathers its space with the work of grown-up local makers, including a showcase of Molly Cranch’s engaging bird-watching paintings in the Nest room, well worth a visit on their own merit.

So, how much is it all going to cost you? Their program rates range pretty extensively, so whether you’re only able to swing a $12 daily drop-in rate (for up to two caregivers and one child, and then $7 per additional sibling), can afford to invest in a ten-visit pass (also for up to two caregivers and one child, and then $35 for each additional sibling over nine months old) for $100, or expect to make a routine of it with the $80 per month for unlimited visits ($20 per additional sibling), Gather’s rates are sufficiently sliding-scale to work for just about everybody. And it all comes with complimentary coffee, tea and wifi if you need to hunker down and get some work done while the kids are occupied. They also host birthday parties giving groups use of the entire facility, with prices ranging (up to fifteen kids) for $300, and offering a range of customizable options for giveaways, art projects and entertainment, landing in the nearly a thousand bucks spectrum on the upper end.

As previously reported in this space, the inaugural September art-for-healthcare O+ Festival is now gearing up for launch. The National Museum of Mexican Art will serve as the festival’s central destination for those with health-care needs, and will be open on Saturday, September 5 from 10am-6pm and on Sunday the 6th from 10am-5pm. Numerous additional organizational hosts are signed up throughout the two-day event, including Erie Family Health Center, Pilsen Pharmacy and the Midwest Workers Association, which aids “patients in tackling bureaucratic hurdles encountered with implementation of the federal Affordable Care Act.”

With more than thirty bands listed to perform at venues throughout the Pilsen neighborhood, there’s quite a lot to choose from. The group has posted a preview of the acts on their Soundcloud page at http://opositivefestival.org/chicago/news/chicago-line-up-now-on-soundcloud.

More information on festival schedule updates are available at opositivefestival.org/chicago.