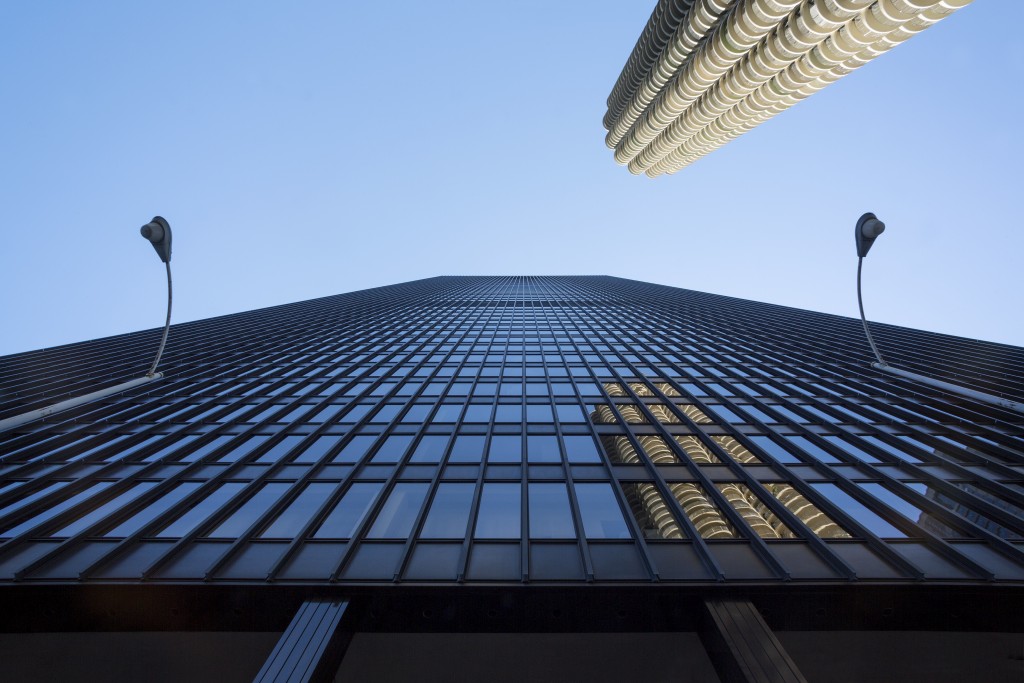 It is not the first time the iconic Bertrand Goldberg-designed buildings have been nominated. A 2008 attempt didn’t progress, but it looks hopeful now that the Commission on Chicago Landmarks voted for a preliminary recommendation.

A successful designation would prevent the towers from being turned to rubble, as was the fate of Goldberg’s Prentice Women’s Hospital earlier this year. Landmark status means owners need permits for significant alterations and have building work approved by the Commission in order to preserve the architecture’s historical significance.

Affectionately known as the “Corn Cobs,” Marina City is acknowledged as a great example of expressionist style. Goldberg studied with modernist Mies van der Rohe at the Berlin Bauhaus in the early 1930s, but developed a more exuberant style. Along with Le Corbusier, Felix Candela, Frank Lloyd Wright and Eero Saarinen, Goldberg veered away from the rectangular monoliths favored by Mies, in favor of curvaceous, more playful structures. The contrast is seen in William Zbaren’s recent photograph of one undulating white tower reflected in the stark black tower across the street, Mies’ austere IBM Building from 1972. (The IBM Building secured landmark status by a unanimous vote in 2008.)

Goldberg’s mother-in-law, Lillian Florsheim, summed it up by saying “Oh, that’s what we used to call living above the store!”

Michael says the design was an “absolute departure from the glass and steel boxes of the day, floriform concrete that took advantage of river views and created a unique profile. The revolutionary construction technique included a scheme of replicable forms that traveled up the spine of each tower.”

The towers included some of the only housing built in the central area in the 1960s, conceived by Building Service Employees’ International Union president William L. McFetridge and developer Charles Swibel to provide affordable housing to union workers. Mayor Richard J. Daley supported the project, hoping to revitalize downtown Chicago and counter the era’s suburban sprawl.

Michael says Prentice’s demolition has increased the relative value of Marina City since there are fewer of Goldberg’s buildings now. “Hilliard Homes were magnificently restored and River City is still there, although Marina Towers represents the 1960s work of this distinctive Chicago architect in a way no other building does. It evokes its era: the swinging sixties replete with automobiles and powerboats and bowling alleys.”

He hopes it will secure landmark status. “It has become a familiar feature of Chicago that would be gravely missed should it be lost. The fact that it is a multi-use complex actually makes it somewhat easier to preserve than a single-use building like Prentice.”

Owner consent is sought as part of the landmark process, although the Marina Towers Condominium Association made a deal in its contract with the commercial owners not to initiate, seek or support landmark status. Michael says the owners have an interest in keeping them maintained to guard value.  “Landmark status generally protects value and investments,” he says.

In other news at Marina City, long-term tenant and news website editor Steven Dahlman says his lease is not being renewed as it has every year for the past five years. He believes it results from an attempt to muzzle his reportage.

Dahlman, the editor and publisher of news websites Marina City Online and Loop North, has written extensively about management and condominium association issues. His stories include details of longstanding federal lawsuits against Restaurant.com, whose former co-owner was Ellen Chessick, the president of the Marina Towers Condominium Association. The lawsuits, dating back to 2010, include class action suits relating to unredeemable gift certificates from restaurants around the United States.

Dahlman and his wife Carol Pandak have lived at Marina Towers for ten years, and in the current apartment for the past five years.

The termination followed a grievance filed by Dahlman against a MTCA lawyer and a subsequent closed-door meeting between the MTCA president and Dahlman’s landlord.

Dahlman’s original grievance with the Attorney Registration & Disciplinary Commission cites an attempt to “intimidate and discourage the publication of news stories,” in a violation of his First Amendment rights. He wrote that a threat of penalty was intended to “intimidate a bona fide news outlet from covering stories” that the MTCA lawyer and her client do not wish to be made available to the client’s owners, residents and the general public.

Dahlman’s landlord Michael Michalak, has several real estate listing websites hosted on Dahlman’s sites. He declined to make comment. Ms. Chessick says it is a matter between owner and tenant.