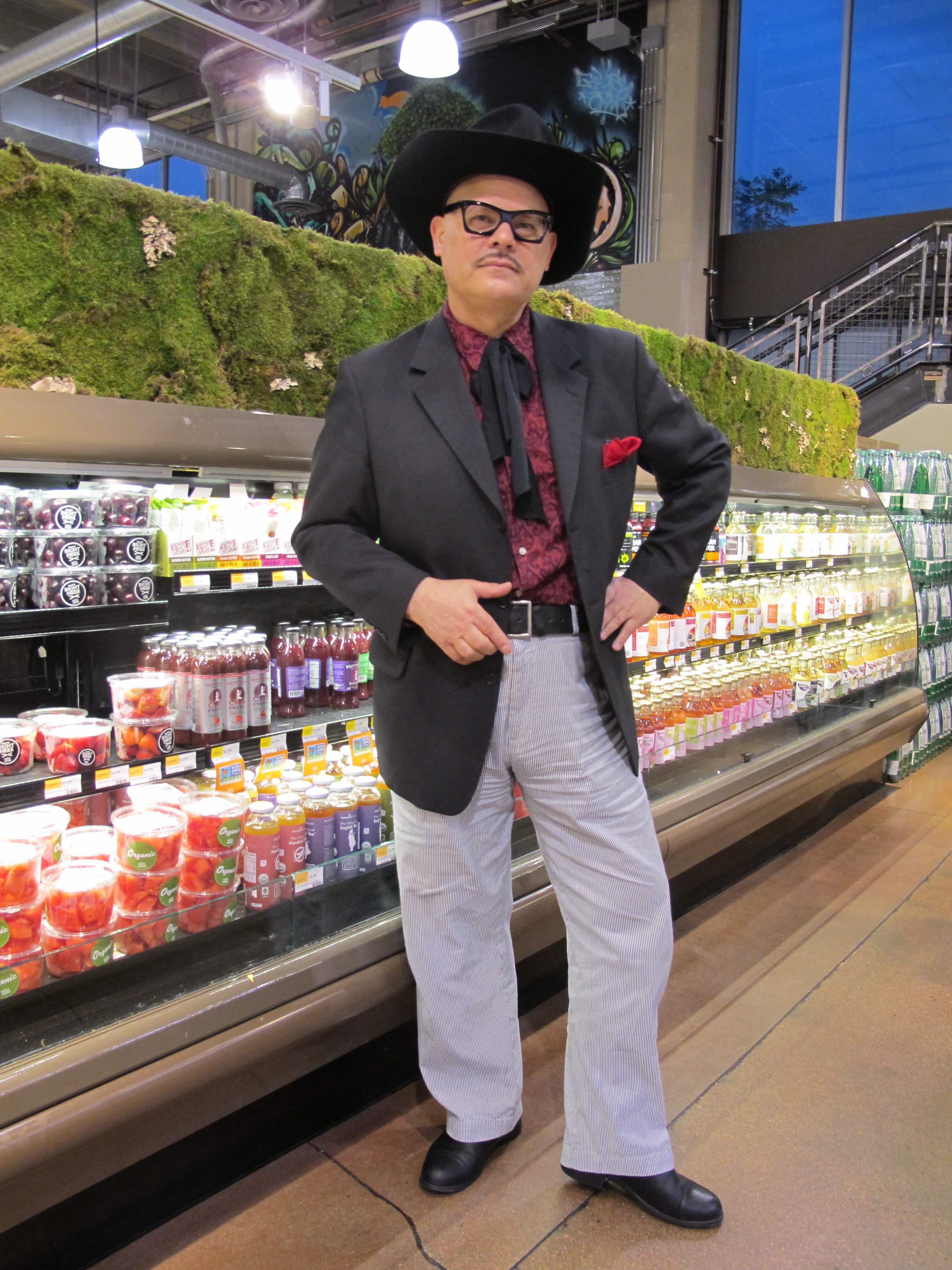 Should I use “singing cab driver” as your occupation?
One of my handouts says “Entertainer, Street Philosopher, Raconteur,” but I often say I’m a performance artist or guerrilla street-theater performer. Also, I prefer not to be referred to as “a singing cab driver.” I am The Singing Cab Driver. It’s a formal title. Like The Lone Ranger.

Do you dress this sharp every day?
I dress sharp every day because A, it pleases me, and B, I can. All part of my effort to make the world a more interesting and beautiful place, starting with my image in the mirror.

Could you tell me a bit about your wardrobe? Where do you buy your clothes?
I like high-waisted pants, big-collared shirts, wide lapels and big-ass hats. My wardrobe is ridiculously huge, collected over the last twenty-plus years from thrift stores like The Village and Salvation Army. A few things I’ve bought online, like eBay. Forty hats. Maybe 800 neckties and scarves. Hundreds of shirts, pants and sport coats. Overcoats and raincoats. And off-the-wall costume stuff for… I don’t know. Never know when you need a space helmet, nineteenth-century British pith helmet or stovepipe hat. Not everyone has the time to hunt for all this stuff. Much of it would be hard to find retail or even online. It’s nice to have a choice but it’s not easy being me. Sometimes it takes a half hour to choose the right tie.

How would you define your style?
Personal. Leaning toward costume. Anachronistic. Not of this time. Pulp romantic, I guess. I like to dress like I walked out of an old movie. Film noir, jungle or sea adventure, Victorian science fiction or Western dime novel. I have not been a fan of men’s fashion of the last thirty years or so. That’s why I started buying out-of-fashion things at thrift stores. My buying has slowed down considerably because now the stores are full of things people bought ten or twenty years ago. Many of my purchases were probably donated by next of kin, so I call my style “oburoni whew.” That’s a Ghanese phrase that describes the popular fashion of wearing American clothes from the missions. Translated, it means something like “a white man has died.”

What do you think of the way people dress nowadays?
I drive at night, so I mostly see people when they go out for the evening. Over twenty-four years I’ve watched trends on the street come and go and even generational demographic changes. I’m happy to see so many young women wearing dresses, really nice ones. That wasn’t so common twenty years ago. Unfortunately they are often accompanied by men dressed as little boys, wearing baseball hats, often backwards. Modern men seem to dress in a fashion I would describe as “intentionally or unfortunately unintentionally immature.” More young guys seem to be wearing sport coats nowadays, but a dress shirt not tucked into the waist just looks sloppy. Modern pants have a low rise that tends to make the torso look long and the legs short. Not at all flattering to the male figure. Perhaps that’s why the shirts are hanging out. I abhorred the grunge look, faded flannel and torn jeans. The homie, jailhouse bitch look of pants hanging off the ass. The douchebag backward adjustable baseball hat. In my opinion, no male over the age of fourteen should wear a baseball hat unless they’re in the act of playing baseball.

In an ideal world, what would everyone look like?
Rich Brazilians? Do you mean how would they dress? I’d feel right at home in a world where people took pride in their appearance. Like they really cared to express their individuality. Of course, one has to feel pretty good about themselves to stick out in a crowd. If you only feel comfortable dressed like everyone around you, isn’t that wearing a uniform? Many today, especially men, have the look of CGI background crowd scene extras. It’d be awesome if more people dressed like they were the star of their life story in a production that had an awesome costume designer.