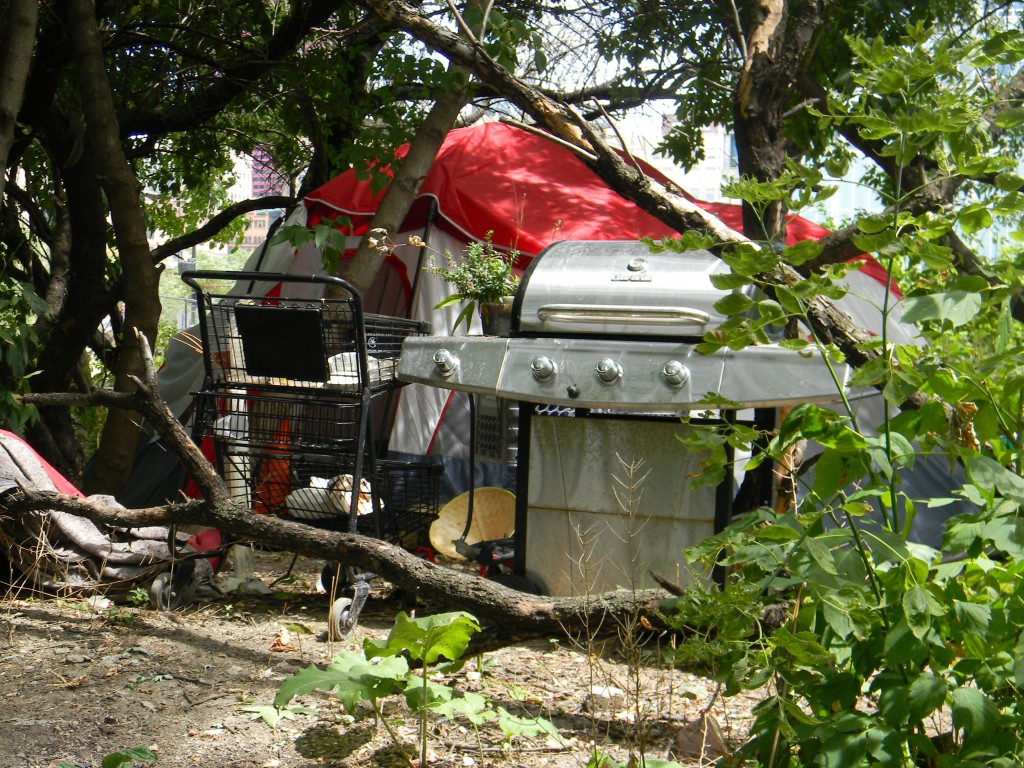 A modern-day hobo camp in the South Loop

Du Sable established a farm on the Chicago River in the 1780s. By the 1820s, trappers, traders and “squatters” began a larger settlement at the convergence of the three branches of the river, then an empty prairie named after the local wildlife, Wolf Point.

Almost two-hundred years later, a new encampment has sprung up on the South Branch of the Chicago River, stretching from Harrison Street to Bertrand Goldberg’s River City development, a swath of 6.6 acres of open land known as Franklin Point. Instead of cabins, residents live in brightly colored nylon tents. Food is “gathered” via donations and trips to fast food restaurants. While the wolves have long vanished, the tent residents are wary of thieves and an occasional visit by the police.

Yet these people still live their lives largely outdoors, enduring the wind, rain and Chicago winters in the same way riverfront settlers, squatters and hobos have throughout the city’s history, from Wolf Point to infamous encampments on Goose Island and now, the South Loop. 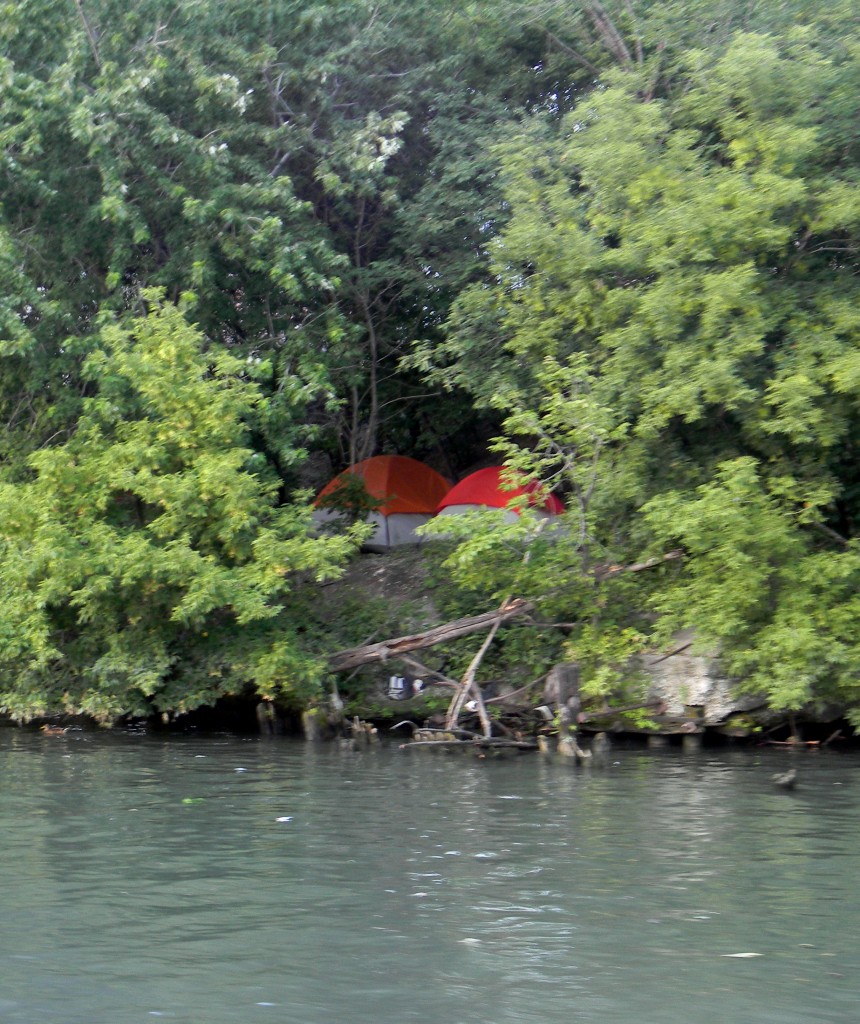 “My wife and I have been here for three, well, more like five years,” says a man called Joe as he emerges from the riverbank. “We make friends with the dog walkers who help us out and one guy comes with a truck and brings us cases of water and peanut butter. Otherwise, we panhandle or get food from the dollar menu.”

Joe is agreeable with telling his story and is glad that somebody will talk to him, but he doesn’t necessarily want to be identified. Tall, thin, with a wispy beard and rope belt, he and his wife arrived in Chicago from Jamestown, New York, a small town close to Buffalo. They didn’t plan on ending up in Chicago but while panhandling downtown, they saw open space and temporary shelters along the riverbank and decided to stay.

In this way they are carrying on a tradition that is literally as old as the city itself. It is more than probable that the first residents of Wolf Point did not obtain their land through licensed realtors. The Illinois Canal Report, commissioned by Governor John L. Tanner in 1900, documented:

“Trespassers, timber thieves, squatters and speculators living along the Chicago River and the line of the proposed canal had undisputed sway in the immediate vicinity of the original subdivisions of Chicago and appear to have taken prompt measures to secure the full benefit of the opportunity. Many pieces of state property were appropriated for private use upon which were erected stores, dwellings, and other private improvements.”

As with other “squatters,” a lack of litter, crime and complaints plays a major role in whether or not the authorities interfere with the tent city in the South Loop.

“The police know us, and as long as we clean up and are good campers they don’t bother us,” Joe says. “Sometimes we leave a mess and we try to clean it up, and that’s the only time they bother us, especially in the fall when the leaves come off the trees. Some people grill but we really can’t have fires. That’s another thing that makes the police mad.”

As he talks, dog walkers let large retrievers and shepherds run. There are few or no reported problems with the high-rise dwellers. On the river side, tour boats pass by the area every hour.

“I am up and down this stretch between Madison and Chinatown all day,” Charlie Mesimore, a deck hand on the Chicago Water Taxi says. “We usually see people just hanging out, sometimes putting up clothing. One time I saw a naked lady. I think she was changing and didn’t see the boat coming and was kind of embarrassed. Sometimes they have little parties and on the Fourth of July they had fireworks. Otherwise, it seems very quiet.”

As for the future of the area, the site is up for sale. On their website, the real estate auctioneer, Rick Levin and Associates, lists the price for the plot at forty-one million dollars. Curbed Chicago reported in June that a 2,700 unit development was being planned for the area, but at a recent meeting by residents at 701 South Wells, the general consensus was a wait-and-see approach toward developing the long vacant land. 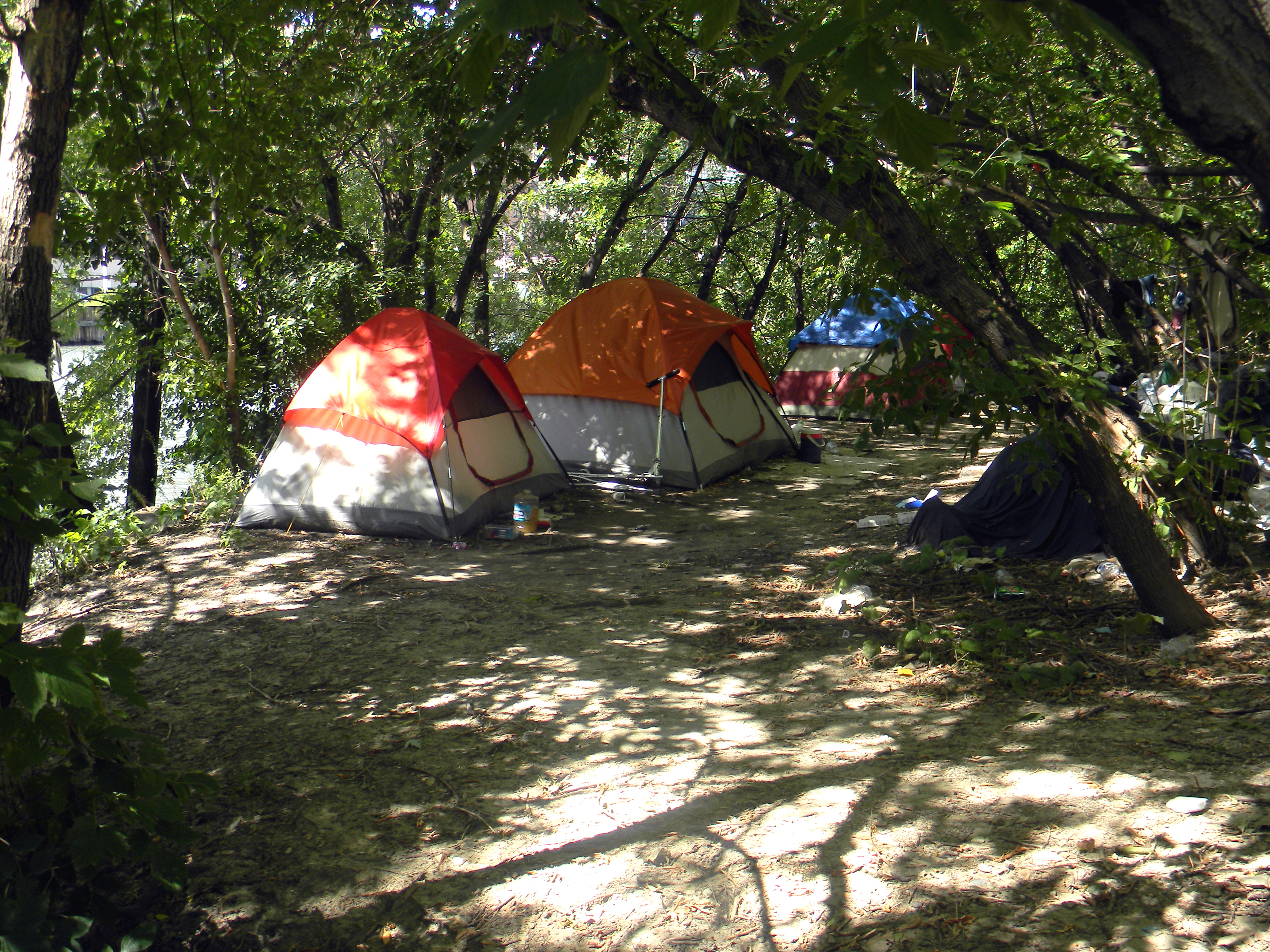 The original settlers of Wolf Point did not have to concern themselves with high-rise development, but one thing the squatters of past and present have shared is concern about making it through Chicago’s harsh weather.

“We have been here for five winters. We keep warm from body heat but sometimes the snow is up to here,” Joe says pointing to his waist. “Last winter was pretty rough, and I don’t know if we can make it through another one.”

Hopefully, they can. In a city that once spawned Maxwell Street, but is increasingly becoming licensed, franchised and privatized, the tent city represents a link to Chicago’s more organic past.

“Nobody that I talk to along the river has any problems with them,” Mesimore says as he stares at the churning wake of the water taxi. “Personally, I think it is very cool that these people can make a home for themselves in this little odd patch of nature.”