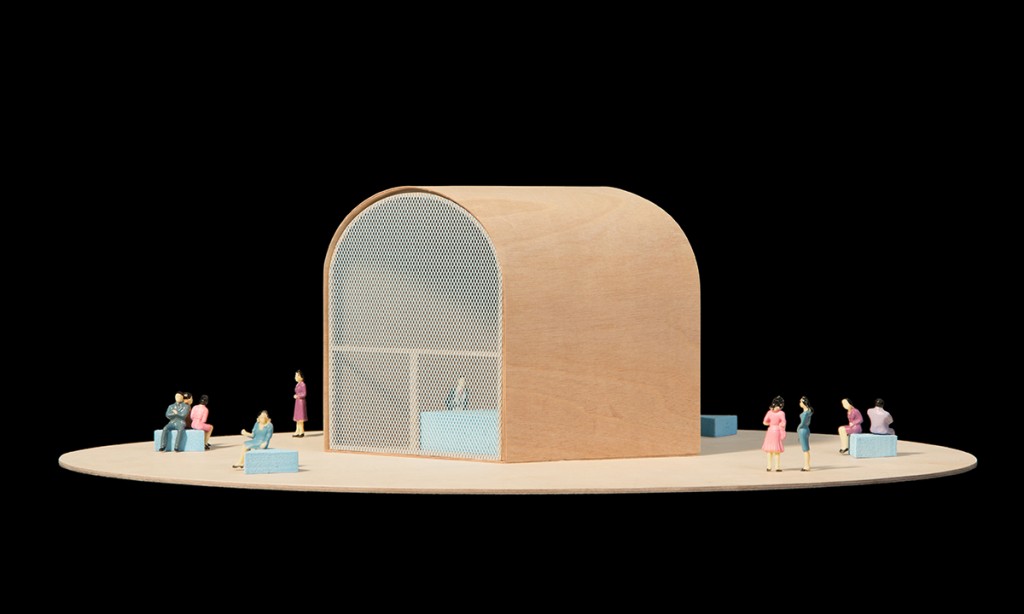 A legacy project of the Chicago Architecture Biennial is the unveiling of four new designs for lakefront kiosks. The kiosk designs were selected through a manifold process: a “winning project” sourced through an international competition, and three others designed through collaborations between local architecture programs and internationally renowned architects. All four entries will be displayed in Millennium Park during the biennial and be installed on the lakefront in the spring of 2016.

It is good to know that some hometown talent will be on display as part of this program. Architect Paul Preissner, in collaboration with Denver-based Paul Andersen of Independent Architecture, submitted one of the final kiosk designs. The duo previously collaborated on an award-winning project for the Biennial of the Americas in Denver.

Their kiosk, “Summer Vault,” is in Preissner’s words, “a retail dot on the lake landscape.” Rather than focus exclusively on commerce, the “Pauls” wanted to create a great public park project—something participatory and egalitarian, more like a pagoda or pavilion than just a store. Inside, the space is bisected on a diagonal, creating two triangular spaces of ninety-square-feet each, so equal space is allotted to the retail function and the public space.

Fabricated out of a half-inch sheet of steel, the large vault is painted blue and set askew on an egg-shaped public plaza to create a wonky perspective. The form is legible but the proportions unfamiliar.  Depending on the angle, it is either invisible or a focal point. The materials are not “fussy” but create something that Preissner describes as “humble and strange, loose and irreverent.” Welded by local company K+K Iron Works and formed by family-owned Chicago Metal Rolled Products, the kiosk is incredibly heavy, but looks light and paper-thin.

Throughout Preissner’s work, he plays with foreshortened views, strange lighting and colors. Less interested in monolithic forms, he often breaks up the program into smaller buildings for a campus-like effect. The smaller massing, he says, “introduce a more personal relationship with the architecture.” Some of his projects look like blocks that a kid pushed around. The apparently scattershot arrangements create exterior “rooms” that appear unintentional.

Before striking out on his own in 2006, Preissner worked with many of the most interesting practitioners in late-twentieth- and early twenty-first-century design including Philip Johnson, Peter Eisenman, and Wood and Zapata. His work has evolved from the computer-generated shapes that demonstrate “gymnastic ability” to more basic geometric forms that emphasize scale and composition. “I started to get aesthetically bored with computational complication,” he says. “It already won. Lots of people do it. The look is too easily commodified. The ideological looseness of the work started to creep me out.”

His current work reflects more of an alignment between his interests in architecture and how he lives as “a human being in the world.” As a discipline, Paul says, architecture is “always trying to be superlative—at the edge of complication to produce a notion of value.” He wants to create an architecture that is intentionally “dumber,” while communicating the same ambition regardless of budget, scale or material.

Architecture is very serious business. A literal expression of wealth. Paul Preissner wants it to be something else. Accessible, sloppy, loose and perplexing.  He thinks architecture should challenge our expectations, disrupt our view and make us slightly uncomfortable. It should make us ask “Why?” and maybe, even make us laugh.