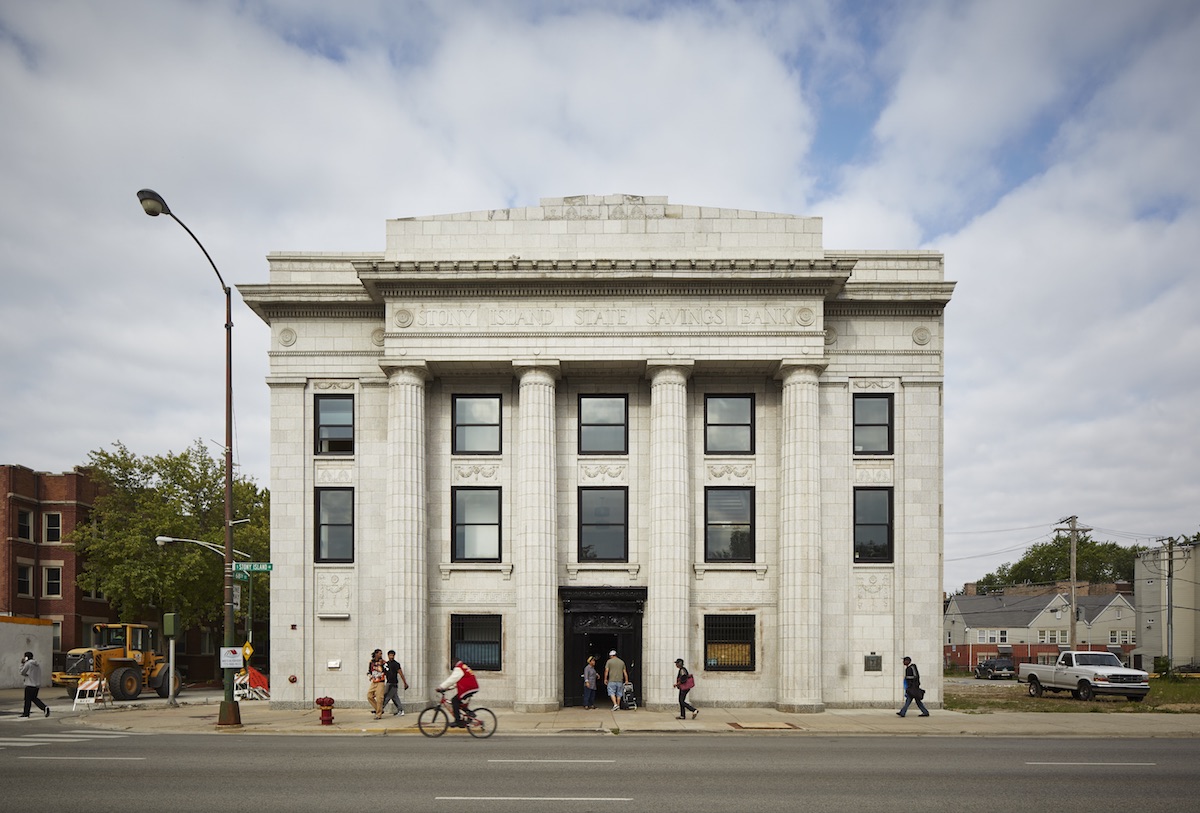 The work of Theaster Gates in the Greater Grand Crossing neighborhood stands as a series of bold community-based experiments that weave together art, architecture and urban development, illustrating how the three co-mingle to effect change. His meticulously conceived and crafted projects, including the Dorchester Art + Housing Collaborative, Black Cinema House and Dorchester Projects—created with sweat equity and repurposed raw materials—have reclaimed property and cultural value from decades of disinvestment and abandonment.

The Stony Island Arts Bank building, at 68th Street and Stony Island Avenue, while in this tradition, represents a huge leap forward in scale and ambition for the South Side artist and urban planner, and for his Rebuild Foundation, the non-profit organization Gates established in 2010 to staff and support his work. Designed by William Gibbons Uffendell and constructed in 1923, the former Stony Island Trust & Savings Bank had been vacant and languishing in disrepair since the 1980s. Gates purchased the building for $1 from the City of Chicago in 2012 to save it from demolition. As reported by Melissa Harris in a recent Chicago Tribune story, all of the people who understand his aspirations cautioned Gates to walk away from the building.

The advice is understandable. At 17,000 square feet, it’s a big building. Located a few blocks from Rebuild’s other sites, the neo-classical three-story structure, as shown in historic photographs on the Rebuild website, once capped a row of two and three-story commercial buildings that were a vibrant community nexus. Today, the building stands alone, at first sight a disconnected relic on a barren stretch of the boulevard, with strip malls ranging to the north and south.

While practical considerations seem to make the project a less-than-feasible proposition, contained within the apparent improbability of its success is a seed of cultural urgency being activated by Gates’ leap of imagination and faith.

Start with the cultural legacies that have been bequeathed to Gates and that will be housed in the Arts Bank. 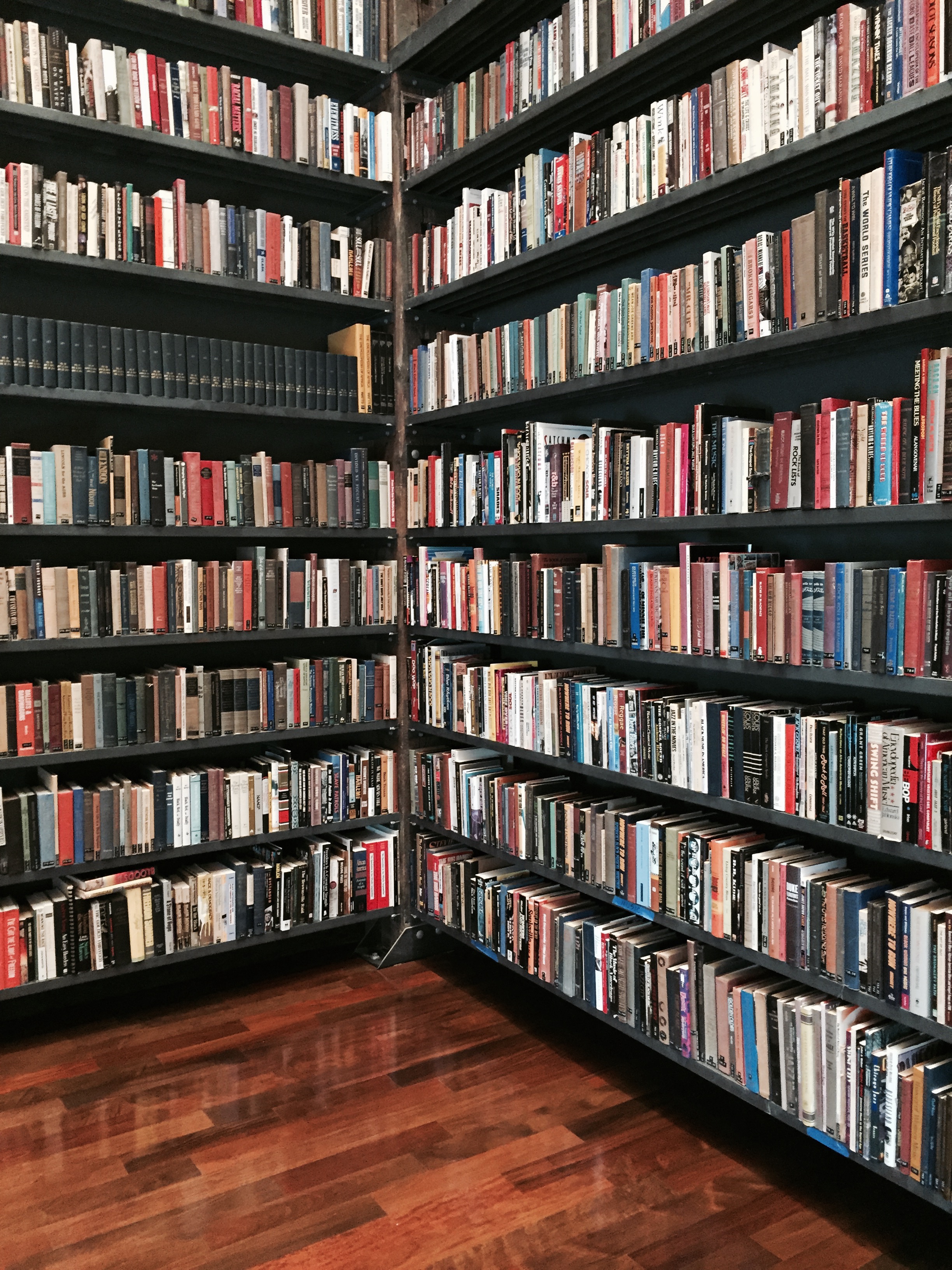 In 2012, Linda Johnson Rice, chairman of Johnson Publishing and daughter of founder John Johnson, gave most of the Johnson Publishing Archives, the company’s research library and publications, to Gates. The collection has been installed at the Arts Bank in a three-sided enclosure on the second floor, with publications such as “Jet,” “Ebony” and “Negro Digest,” as well as thousands of fiction and non-fiction books and other texts that chronicle African-American history and culture since the 1940s.

Also entrusted to Gates was the collection acquired by Edward J. Williams of “negrobilia”: stereotypical, racist objects and depictions of black Americans and other Africans in the black diaspora, from the Civil War era to the present, which Williams and his family purchased to remove from circulation.

More than 60,000 glass lantern slides of images from Primitivist art to the Modernist period from The University of Chicago and the School of the Art Institute of Chicago, no longer used in the age of digitization, were also donated to Gates.

The Arts Bank also houses the vinyl collection of Frankie Knuckles, the “Godfather of House Music,” which Gates acquired after the Bronx-born producer, remixer and DJ, who moved to Chicago in the 1980s, died in 2014. The collection is ensconced in another alcove-like space on the third floor, conveniently appointed with an original library ladder and hardwood file cabinets.

During a press tour of the site on September 18, in advance of the public opening on October 3, Gates gave a compelling introduction to the Arts Bank.

“Who has the right,” Gates asks, “to amazing culture?” The highest imaginable culture, he noted, usually becomes the domain of the elite, the wealthy, whoever and wherever they may be. It is rare that the makers of culture, black Americans, for example, who made jazz and who invented the blues in their everyday lives on the streets and in churches, have ownership of the fruits of their talent and creative enterprise.

With this as his premise, Gates looks to the example of rapper Jay-Z: “Build the space you want to rock in.” 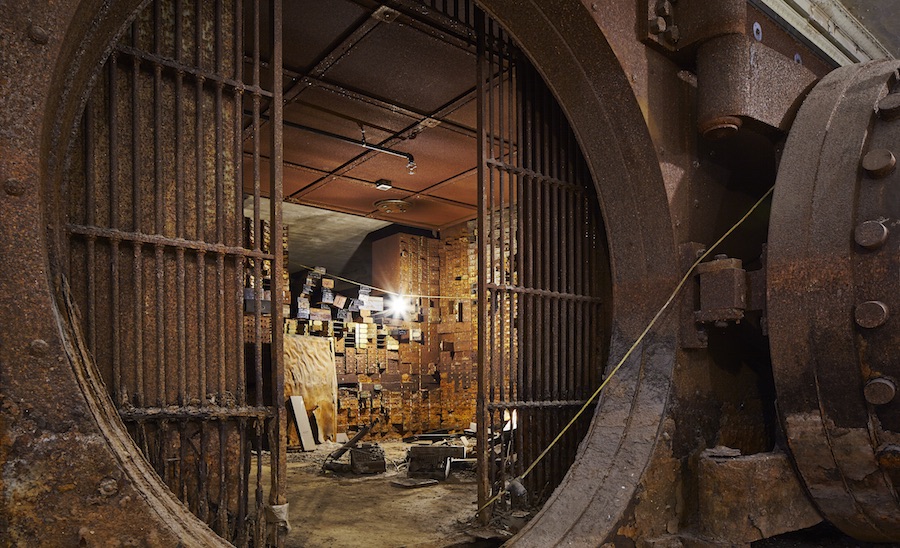 The Arts Bank is a new invitation to the neighborhood, the city and the world, Gates explains, demonstrating another archetype of what an artist-owned-and-operated space looks like. “It’s not just about how paint is used or sculpture is carved. The systems and policies that shape our lives—city and state politics, philanthropy, housing and cultural policies—are reasonable, malleable forms that can be molded and shifted like paint and other artistic media.

“The Arts Bank is mostly about having black things in black space, but we are also interested in what happens when artists take forms, like clay, and work with them. We can use clay to imagine, and to shift other forms, old political, social and architectural forms.”

The Arts Bank project is also exciting for the ways it transcends distinctions between architecture and art. Gates is an artist—he is not an architect. And yet, he has designed and directed the interior renovation of the Arts Bank—an elegant blend of pristine, refinished walls and painted surfaces preserved in a luminous patina, like glazed pottery. In a broader sense, he is the architect of the concept for this repurposed building, which has already been approved for National Landmark status. 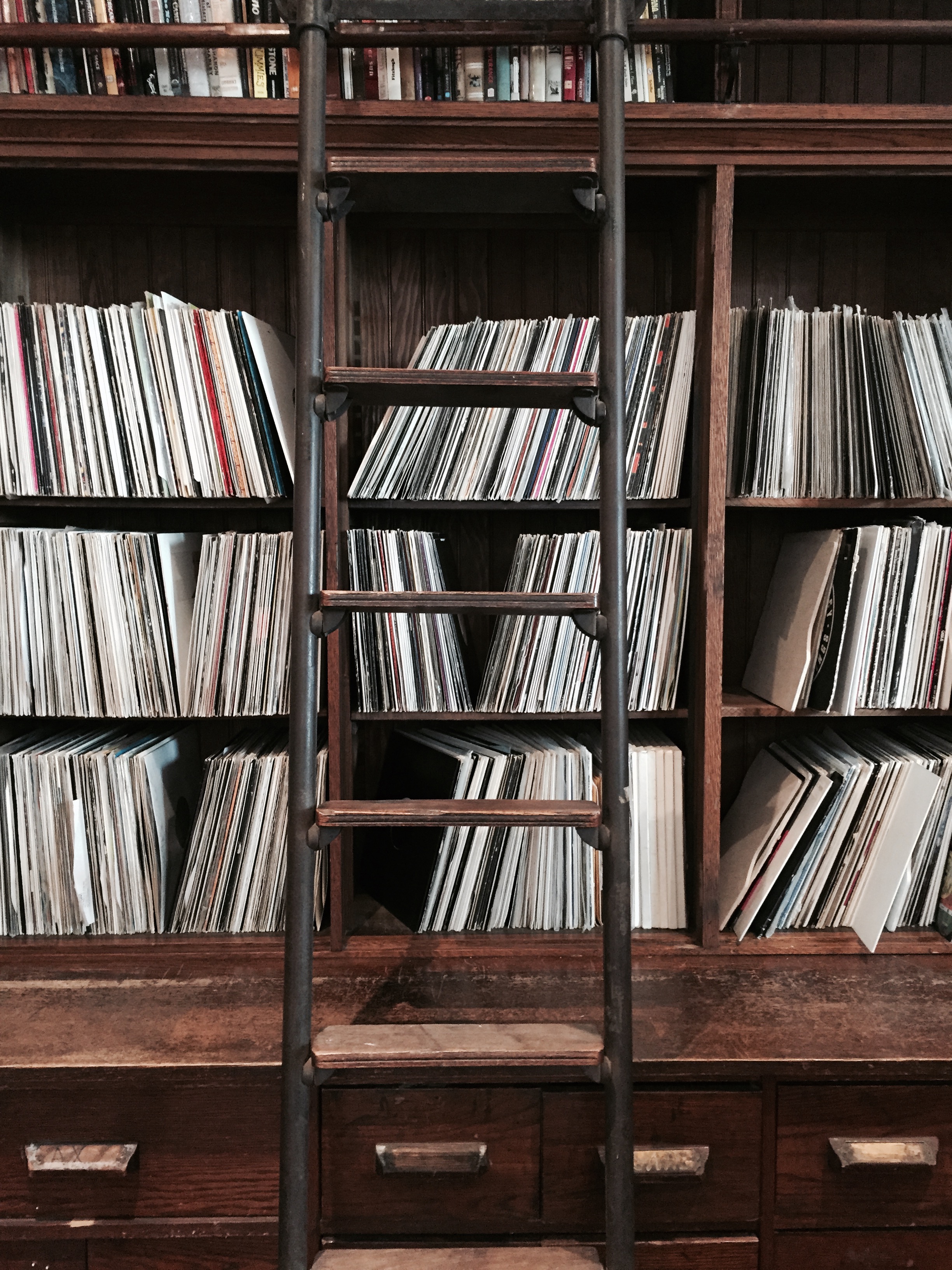 The bank will serve as a primary site for the Chicago Architecture Biennial, whose theme is “The State of the Art of Architecture.” It is one of seven primary sites, and one of only two venues not located in or near the Loop (the other is the Illinois Institute of Technology). The questions Gates is raising and risks he is taking with the Stony Island Arts Bank anticipate the Biennial challenge to “explore how creativity and imagination can radically transform lived experience.”

An installation by Portugal-born artist Carlos Bunga will be on display during the biennial. Bunga, who lives and works in Barcelona, creates process-oriented installations, performances, video, drawings and sculpture that explore the relationship between doing and undoing, making and unmaking. His use of everyday materials such as cardboard and adhesive tape, to fashion work of great precision, subtlety and delicacy, reflects Gates’ own use of ordinary materials in his art making. The lines of the work—clean and precise, while allowing for natural variations in texture and color, complement the interior of the Arts Bank, where well-aged, polished wood and mottled, rusted metal, throughout the basement vault, has been preserved.

Mexican architect Frida Escobedo is designing a pavilion to be installed on land adjacent to and owned by the Arts Bank, using bricks salvaged from nearby St. Laurence Catholic Church, which was demolished last year. Escobedo’s studio, based in Mexico City, designed the striking Cuernavaca Cultural Center in 2013, as well as an Aztec-inspired pavilion for the London Design Festival at the Victoria and Albert Museum this summer. According to Rebuild CEO Ken Stewart, the Arts Bank pavilion will be installed over the course of the biennial—a process worth watching as long as Chicago’s winter does not intervene.

Because of zoning restrictions, the Stony Island Arts Bank is the first Rebuild site that will have regular hours—11am to 6pm Tuesday through Saturday. Program plans include artist and scholar residencies, salons and youth workshops, such as DJ workshops using the Knuckles collection. Gates is committed to allowing Arts Bank programming to unfold in ways that encourage experimentation and collaboration, and focus on engaging the surrounding community.

There is powerful symbolic value in reclaiming the Stony Island Trust & Savings Bank as the Stony Island Arts Bank. We live in a society that measures its assets by monetizing them. The Arts Bank was once a building whose holdings were counted in cash and, to boot, belonged to the Mortgage Bankers Association of America, among a network of financial institutions that upheld Federal Housing Authority redlining in the mid-twentieth century that enabled ruthless Jim Crow economic exploitation that impoverished generations of African Americans. Now it is evolving on an entirely different plane, into a focal point of cultural assets, a place still of cultivation, management and investment but of an entirely different light. I’m willing to tender my own eager curiosity for confidence that the Arts Bank will serve as a repository of cultural heritage, and as an investor in community resources, artistic talent and creative potential. The yield will be nothing less than a new generation of wealth in knowledge and experience shaped in thoughtfully, respectfully curated, inclusive space.