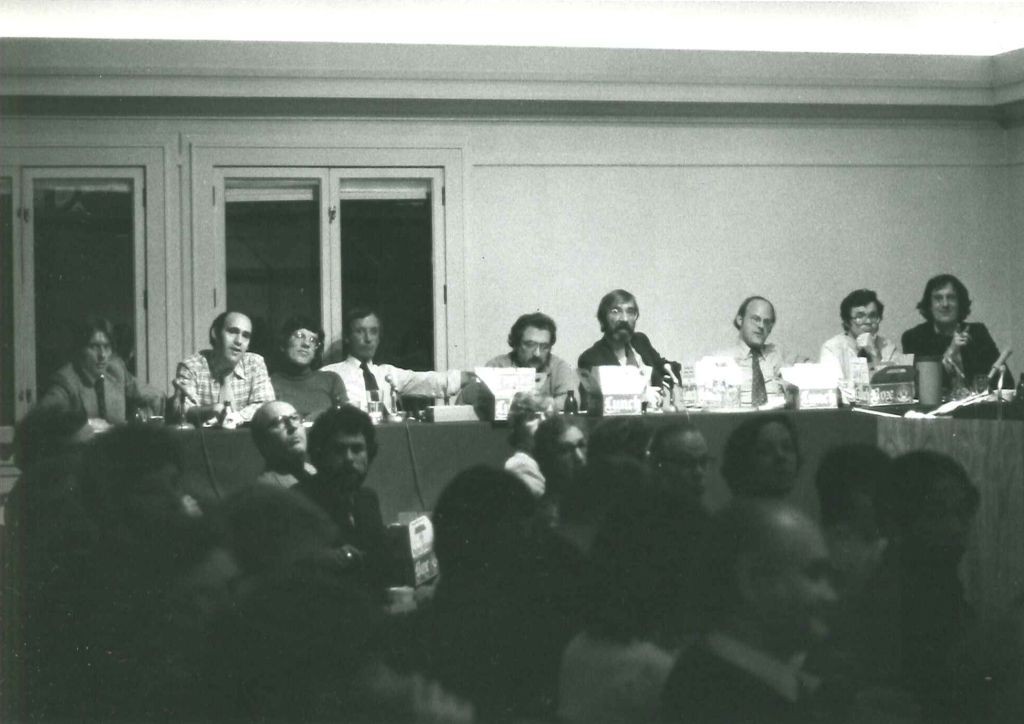 Thirty-eight years may be a bit less than a generation and a half, but in architecture and the revolutionary changes that have occurred in the space between 1977 and 2015, it seems like several lifetimes.  Computer technology generally, 3-D printing specifically, super-tall towers, super-teeny apartments, gigantic carbon footprints and last but not least, dumbed-down professional diminishment via marketing, branding and value-engineering represent massive change to an art form that was once aesthetically, even ethically, driven.

At the 1977 “State of the Art of Architecture” Graham Foundation “mosh pit,” the all-white male panelists were from the United States (the “whites,” “the grays,” “the silvers” and the Chicago Seven); with kibitzers from abroad (Jencks & Stirling).  The average age was mid-forties and most had already built—modestly to be sure—and whatever ideas that were expressed were grounded in form, structure and/or construction, i.e., intrinsically architectural issues.  The excitement generated from the proceedings came about through the built work itself and the enthusiastic ideas underpinning them which were then presented to one’s colleagues.

The 2015 Chicago Biennial is nothing if not global: five continents are represented with less than one-third from the United States. The average age is mid-thirties to mid-forties and one-third of the invitees are women. The overarching point of commonality is grounded in “idea content” with the concerns of the day front and center: global warming, robotics, process-as-distinct-from product, and (amazingly) drawing-qua-drawing. A greater percentage of the 2015 class teach full time a bit more than the 1977 crowd and more than a few challenge architectural conventions (registration, professional society membership), which is to say that new ways of bringing ideas to fruition in the form of inhabitation abound. Time will tell if pure architectural ideation will find its way into built form without losing its zest.

In the spirit of “passing the baton,” I remain optimistic about this newest generation of architects. There seems to be less cynicism among them than the earlier gathering. Of course, there are Salon des Refusés-like uninvited self-promotional proposals authored by academic “wannabes,” retrograde Driehaus-funded symposia and out-of-the-tent former star-chitect gatherings, all of which inadvertently enhance Chicago’s official celebration.

Predictably, those who are omitted are miffed, forgetting that “State-of-the-Art” signifies new “ideas”  not about building, per se. It is also about finding “fresh meat” rather than warmed-over leftovers, and in that search Sarah Herda and Joseph Grima have been appropriately engaged.

Originally modeled after the Venice Architecture Biennale, this is the first one to be grounded on United States soil—Chicago’s Modernist primacy making it a fitting choice as host city. Formerly forward-looking, in recent decades the city’s architects seem to have lost their way.  However, with this first-ever American biennial, new blood at Chicago’s architecture institutions, a Graham Foundation Press launch with fourteen books published at once, two new architectural journals with the promise of two new “watering holes,” (one engaged in materials research, the other a gallery/lecture center) all seem to suggest an architectural renaissance emanating from the heartland. Stay tuned.