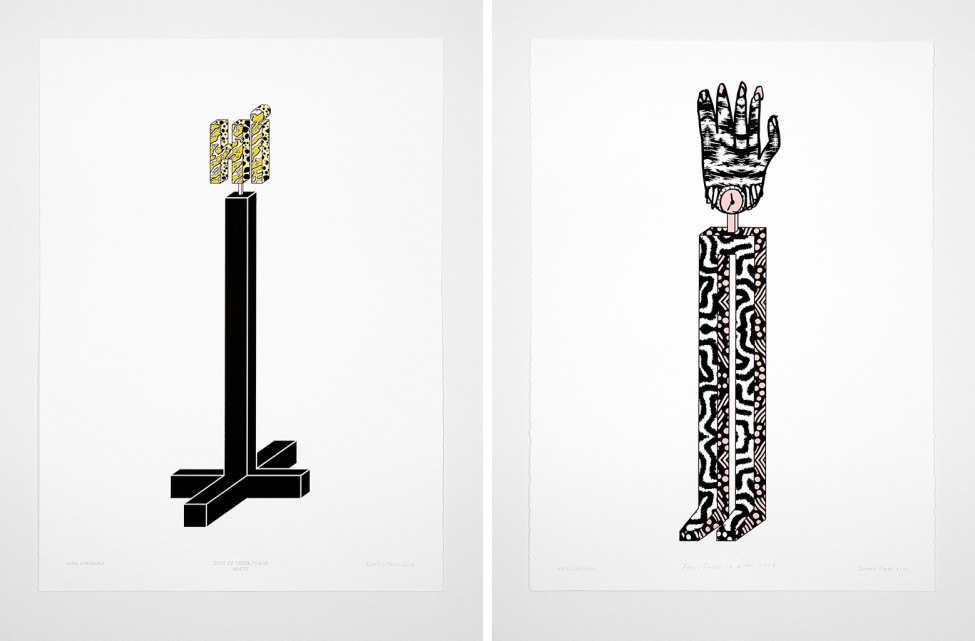 Ania Jaworska explores architecture through the conversations that surround it. For example, take those scribblings tacked to the wall of the architect’s studio, and Jaworska conceptualizes these elements in prints, designs, sculptures and models to show that the art of architecture is an important—and humorous—tool to study human and community interaction.

Jaworska grew up in the stable, historic community of Stary Sacz in Poland. The town never grew beyond its natural boundaries of two rivers and a mountain. Jaworska describes it as a place where “nothing major will happen.” The town revolves around its history, and so began her fascination with architecture and community. When Jaworska later moved to Krakow to study architecture at the Cracow University of Technology, she also felt a sense of the present looking backwards. Architecture was taught and practiced under a profusion of rules, guidelines grown from a need to protect the historic identity of the city. It was, she explains, “somewhat limiting.”

Perhaps then, her move to Detroit, and later to Chicago, explains her fascination with how humans interact with and continue to transform the built environment in the present. While in Detroit, Jaworska studied architecture at the Cranbrook Academy of Art and worked at a local architecture office. Detroit’s compacted history—a meteoric rise and fall in the past century—formed a kind of antithesis to Jaworska’s hometown. Seeing Detroit as an empty studio, she watched individuals take things into their own hands, transforming anew the built environment from its late decline.

Jaworska’s own work turns the most fundamental forms of architecture into icons; each one a study awaiting the individual’s response. A lone column, an entryway, a barrier, or a welcoming sign, each architectural feature is universalized to its iconic meaning. “Hello!”, enter, exit, “Stop!” We interpret, either consciously or subconsciously, these signposts of the everyday.

This work is on display as part of her current exhibition at the MCA running concurrently with the Chicago Architecture Biennial, “Chicago Works: Ania Jaworska.” The exhibit aims to start a conversation and add commentary to the biennial programming. In a myriad of columnar references, Jaworska’s screenprint series, “A Subjective Catalog of Columns,” explores personal taste and power in relating the history and use of columns… with “a cheesy feel.”

She created each piece in a process of “flattening the reference.” By pulling away the decoration, Jaworska ended up with thickly outlined shapes on the neutral ground of folio paper. Take “The Future,” a single black line stating a perhaps absolutely unimaginative design of the future. It is a move toward specificity as the easiest means to communicate. The art itself has humor (see “Whoops!”) but her direct interaction with the audience through captions challenges their perception and makes them laugh. It is a recognition of the playfulness of the “post”-era, screaming, “This is art, wow!”

Jaworska’s work further comes to life through the viewer’s physical engagement with it. The exhibition features an exploration of social cues via architecture, through her set of sculptures “Cynic Monuments.” In a low-lit, black gallery, the spotlight is on the viewer interacting with the sculptures within. Curvilinear black forms and soldered bars form spare structures, signs and monuments. Here, it feels wrong to step over the barriers of “Gated Area” and not enter through the marked entryway. The audience takes the forefront: despite all barriers, whether a velvet rope at a theater or warning signs along a monument, humans will go out of their way to subvert the rules. It is their curiosity, their desire to photograph old masters or lean as close to the surface of paint as possible—perhaps setting off an alarm!—or to laugh loudly in the quiet of a church, that these sculptures reveal.

Ania speaks a great deal about the built environment as “community space,” a topic currently influencing her work as it relates directly to the Chicago Architecture Biennial. She is still searching for the dream of urban planning—a place in Chicago that brings various people together, a space that evolves with its community and truly reflects the identity of the people who use, and thus, define it.