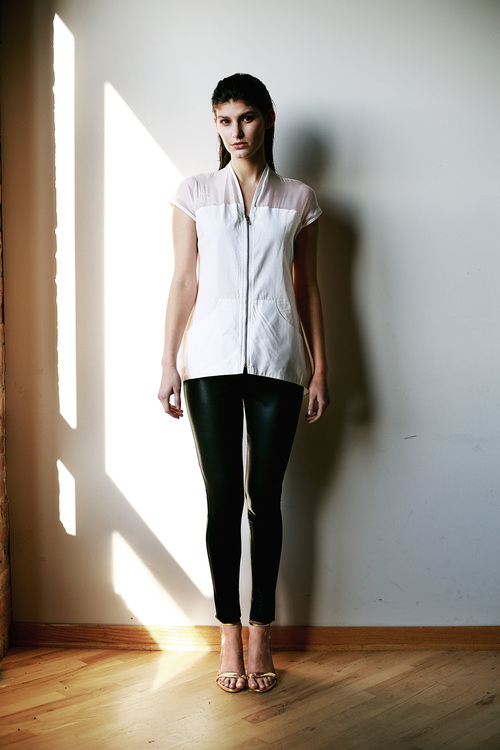 Anna Fong’s timeless and sophisticated, yet hip, clothing has earned her a reputation as a world-class designer. But Chicago is her city.

The homegrown Columbia College alumna got into fashion as a kid, playing with dolls and making their clothes out of socks. In high school, her creative ambition was fueled by the extracurricular art programs provided by Gallery 37, one of Maggie Daley’s legacies. Based in the Loop, it still offers all sorts of free arts programs for city kids.

Over the twentyish years since then, she’s fully honed her taste and craft into ensembles resembling what Jessica Rabbit might wear if she had become the First Lady. Fong draws her inspiration from the 1940s and 1980s, respectively, as well as frequent travel (she has plans to travel to Cuba, Thailand and Guatemala this year) and music. She gets pumped for the day by driving down Lake Shore Drive as the sun rises, listening to Florence & the Machine with the wind in her hair. Also, as so many artists before, she draws inspiration from nature. Particularly flowers.

“But I can’t get myself to use a floral print…right now,” she says. “So, for example, the curved slit [I use] came from the calla lily. I love the subtle curve that the hemline gives. Your eye can follow that curve effortlessly.”

Perhaps her biggest inspiration, though, is herself. When it comes down to it, she makes clothes that she would like to wear. It’s as simple as that. And, as a self-proclaimed “curvy” woman, she obviously understands that a curvy woman’s best friend is a pencil skirt.

“It took me a while to realize that I don’t have to look far for a muse,” she explains. “I am the woman that I’m designing for. I’m a woman who appreciates the workmanship behind a well-constructed, timeless, effortless piece. I’m a career woman, a traveler, confident, ambitious and yes, curvy woman.” 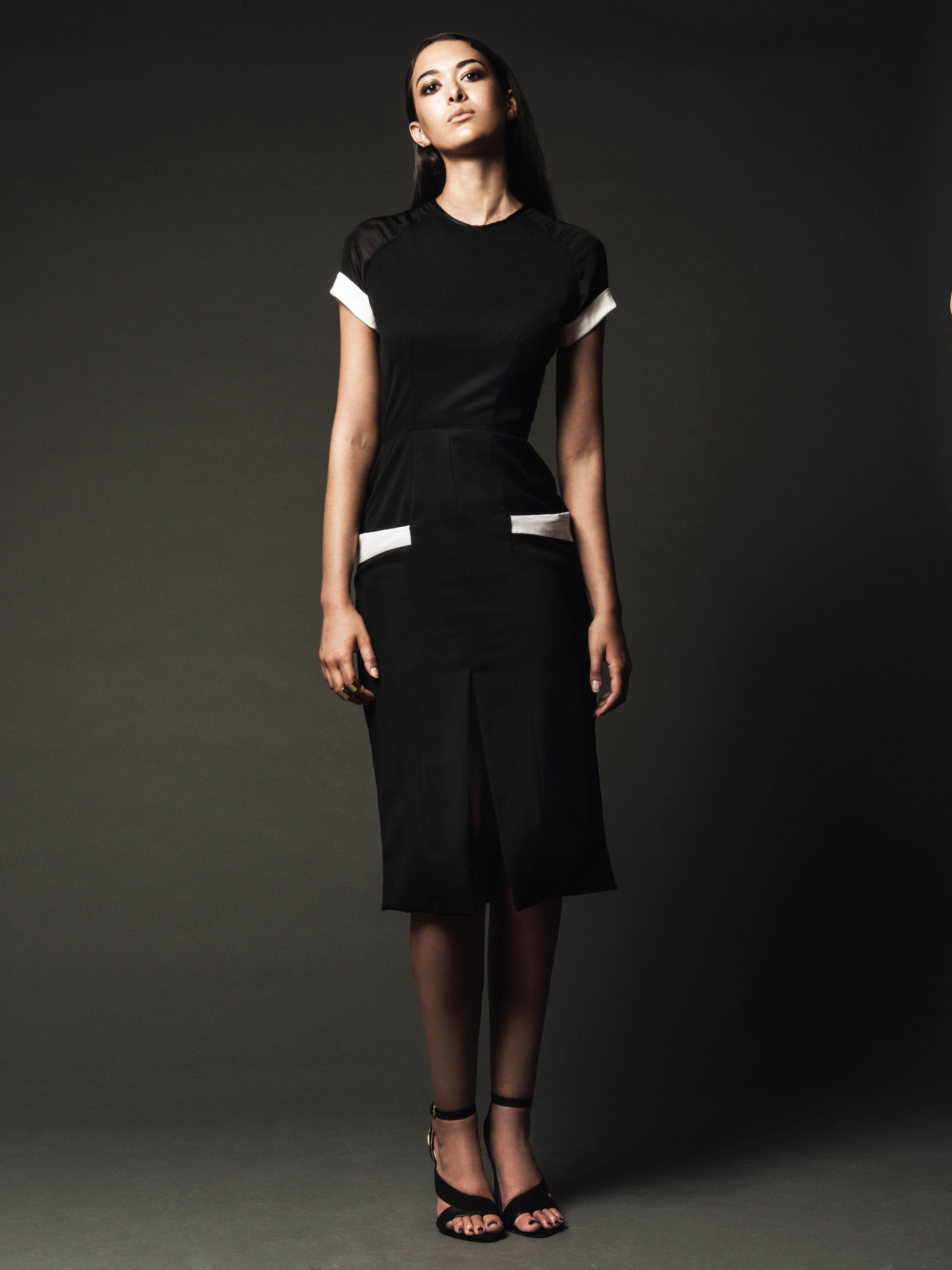 Fong’s “Tilly,” from the Bondette collection

While previous collections—the Spring 2013 “Queen of Hearts” collection, for example—dazzled with lacy Victorian touches and splashes of gold and red, she’s been weaning herself off of color. Last year, she incorporated very subtle, pastel pieces here and there, or maybe a touch of pale, shimmering lamé. Her newest collection, “Bondette,” is almost entirely black with occasional white accents.

Why? “I love the innocence of white and the boldness and sharpness of black,” she says. “I’m also a big believer in less is more!”

Instead of boasting eye-popping colors and patterns, the collection smoothly seduces with provocative angles, slinky silhouettes, sharp lines and structured edges. The unexpected touches—like the thin leather gun-holster-like details on the “Tania” dress—make the clothes pop. They’re not meant for the meek, but they’re not outrageous by any means. They are ready-to-wear with a razor-sharp attitude.

“Being well-dressed means that you took the time to make your look complete from head to toe. Even if you throw on a pair of jeans, but the look is effortless and well-put together. It’s about the person, not the clothes. I love people watching, catching the details in people that make you take a second look, and figuring out why.”

While Fong’s maturing aesthetic is undoubtedly a product of her maturation as a woman, when reminiscing on the evolution of her work, she mentions sales. “I’m still learning as I go, but I’m definitely more aware of the bottom line. I love designing and the creative in me always romances the industry, but in reality, it’s not only about the photo-shoots and fashion shows.” 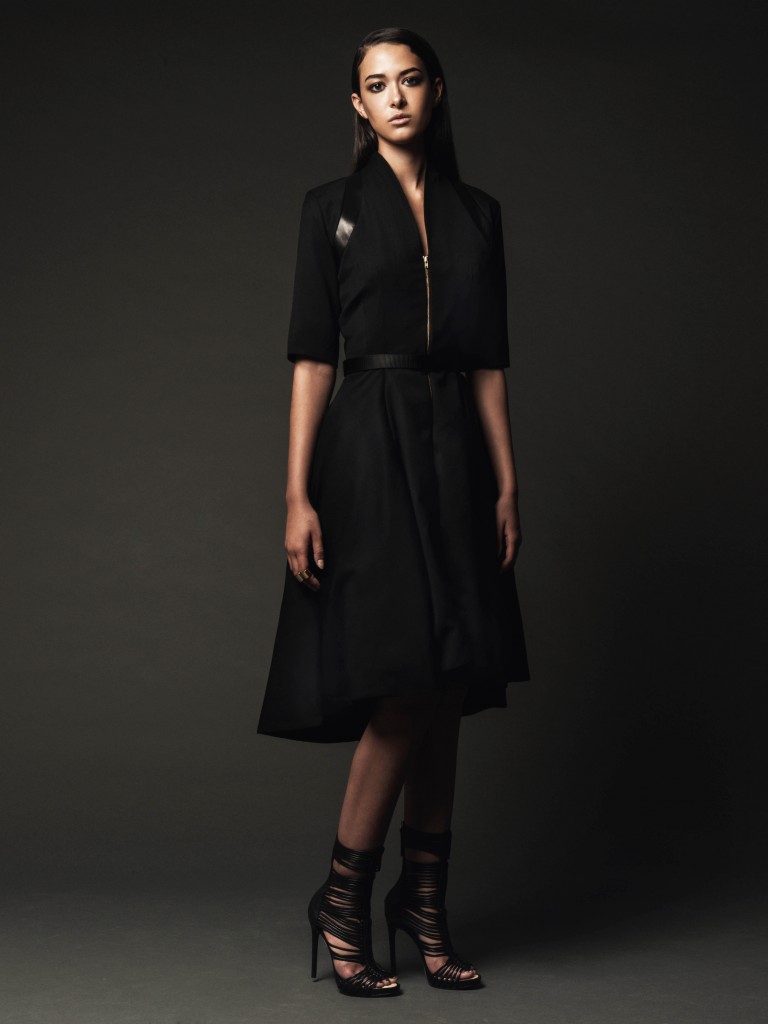 Indeed, it seems that the necessity to make clothes that people will buy has helped her focus. That practical limitation, coupled with her self-imposed restrained palette, has led her to design smart-looking clothing with impeccable details that may take a little longer to notice but resonate with vigor. The pieces look thought-out and doted upon. Important clothes for important people.

“What makes my heart pitter-patter about being a designer,” she muses, “is the amazing opportunity I have to be able to have an image in my head become tangible—the moment I see a woman brighten up, when I see her attitude and confidence change after she slips on one of my pieces.”

And that, after all, is the reason for fashion in the first place.