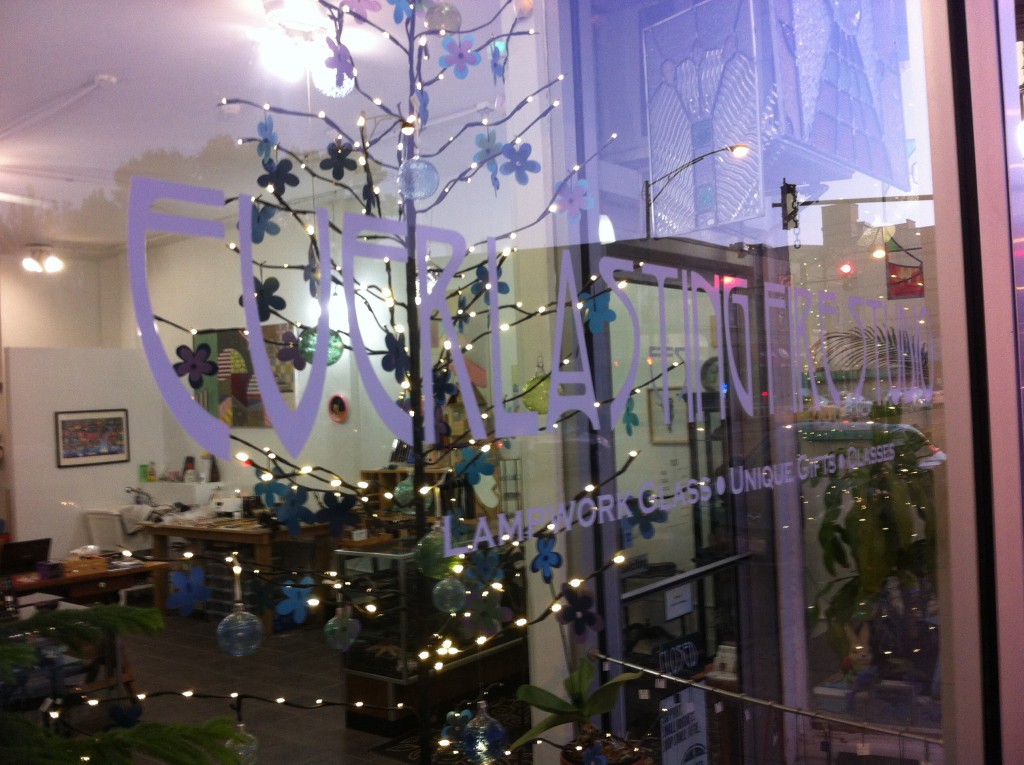 Stroll past the back of the Everlasting Fire Studio on Lincoln Avenue, just south of Foster, on any given early evening and you are likely to encounter two people sitting side-by-side, blue-flame torches flickering, eyes covered with a pair of black-lensed welding goggles. This duo is Elektra Musich and John Landin, the owners and operators of the studio, open for just a little over a year now. After initially meeting while taking classes at the Lill Street art complex, they bonded over a shared love of glass and eventually decided to open their own mom-and-pop shop. Offering a range of classes and facilities for others, the pair make their own glasswork using a technique of torch-based manipulation called “lampworking,” a pre-modern technique that was the dominant mode in the ancient world. Done originally by burning oil, these days the systems use gas or propane to heat and reduce glass rods to a molten state that can then be manipulated and combined with other colored glass to produce paperweights, beads and other types of small objects and sculptures.

Classes range from $60 at the low end for a four-hour introductory class using a mandrel to make “mushroom” glass beads, a decorative object in which colored glass is shaped and embedded in a small teardrop of clear glass. At the higher end of offerings, one can take a $180 four-week instructional class that takes visitors through making small sculptural objects such as fish and other types of organic forms.

Interested in stained glass? They also offer courses in making “suncatcher” window pieces, pendants and stained-glass boxes, walking students through techniques in foiling and soldering. The studio goes beyond glass too, offering other courses such as a $35 origami-folding class, a class using mathematical formulas to create hyperbolic crochet forms, and a course in the introduction of scientific drawing. These range from $40-$70 per course. Recently, the studio added a course in making “faux” enameled and resin jewelries, in a three-hour, $60 class. The owners encourage students to bring along a friend or relative, as the experience is great for working together in teams.

This reporter is admittedly an avid cyclist and supporter of Eugene Debs-style activism. Most recently, this has taken the form of participating in the Uptown neighborhood’s social justice group, Uprising. Uprising is leading an effort against the oppression of homeless who occupy Uptown’s “tent city” (roughly defined as being underneath the Lawrence Avenue and Wilson Avenue viaducts where they meet the lakefront) by law enforcement and the neighborhood’s pro-development alderman, James Cappelman. This latest wave of oppression has materialized in the form of sweeps to ticket the homeless for various offenses, threats of arrest and general harassment directed at moving “unsightly” inhabitants out of place and onto park grounds, further displacing them in the interest of “beautifying” the area for consumers.

It’s sickening. So, finding Bikezilla’s shop on Etsy instantly pulled on my heart strings. Shop owner Tom Schaller, a former United States Air Force member, fell on hard financial times after leaving the military, and had to sell all of his photography equipment to make ends meet, including a prized camera that his grandfather had given him. Over the years, he took photography back up again, and simultaneously found himself getting back into another childhood love: cycling. It was natural that he began making images of the world he encounters on his rides, including portraits of the homeless around the city. It’s important because it breaks the “invisibility barrier” that is an expression of society’s unwillingness to even acknowledge the presence of the homeless, turning that heartless notion on its ear and presenting important documentation of their humanity and struggle for survival in all its sad, exhausting misery.

Many of the images Schaller produces come with notations of the encounter, including where he finds his subjects, such as “westbound Garfield St at the I-94 interchange, across the street from Checkers.” It’s also telling that many of the portraits are taken in cold-weather months in the city, the men and women in his portraits draped in layers of old jackets, eyes sad and frightened. Schaller offers introspective, unsparing portraits giving viewers a glimpse into the brutal world of the city’s less fortunate.