When the Museum of Contemporary Art announced its investment in a new master plan, accompanied by a general rebranding campaign, some observers grumbled that the institution could have done better by investing the money in acquiring and exhibiting more art. The criticism may have had some merit, but despite MCA’s strong and diverse programming over the years, the reality is that many would-be visitors are put off by what they perceive as the institution’s impenetrability—particularly the fortress-like hulk of its home on Mies van der Rohe Way. What’s the point of having great art if you can’t get people in to see it?

It’s a question that organizers of the SOFA Chicago expo (an acronym for Sculpture, Objects and Functional Art and Design) have similarly focused on for its twenty-second edition, which runs November 5-8 at Navy Pier.

While SOFA director Donna Davies reports that sales and attendance have improved at the event since the bleak years following the 2008 recession, the changes at the show don’t respond to any specific complaints. “No one was screaming for a new floor plan,” said Davies. “But we saw that, after twenty-two years, we needed to improve the fair experience.” The new approach would better reflect the fair’s character.

“We wanted to change the way people approached the fair, as an exhibit of three dimensional materials and objects,” Davies explained.

SOFA’s management sent out an RFP last year to various design firms for a revamping of the exhibition’s floor plan, which hadn’t changed at all in its two-plus decades at Navy Pier’s Festival Hall. The proposal they got from local architecture firm, WRAP Architecture, went far beyond a simple reimagining of the floor plan: if all goes according to plan, WRAP’s prescription will offer a new approach to the entire user and exhibitor experience.

WRAP is a mom-and-pop studio whose principals are husband and wife Cheryl Noel and Ravi Ricker; its most prominent job to date is Revolution Brewing on Milwaukee Avenue—a job they secured because Revolution owner Josh Deth was a satisfied residential client impressed with the fact that, like many small design firms, WRAP is adept at doing a lot with a small budget. At Revolution Brewing, Noel noted, the distinctive woven walls came from Goose Island Brewery’s cast-off beer barrels, and the light fixtures are made from reused barrel hoops and beer bottles.

Their main objective with SOFA, says Noel, was improving the experience of galleries and of visitors, beginning with access to the show. “At Navy Pier, people arrive at ground level, purchase their tickets and go up to the show,” Noel said. She suggested moving the ticketing area to the second floor and also relocating the show entrance to a more centralized location that gave more equitable exposure to all the exhibitors. 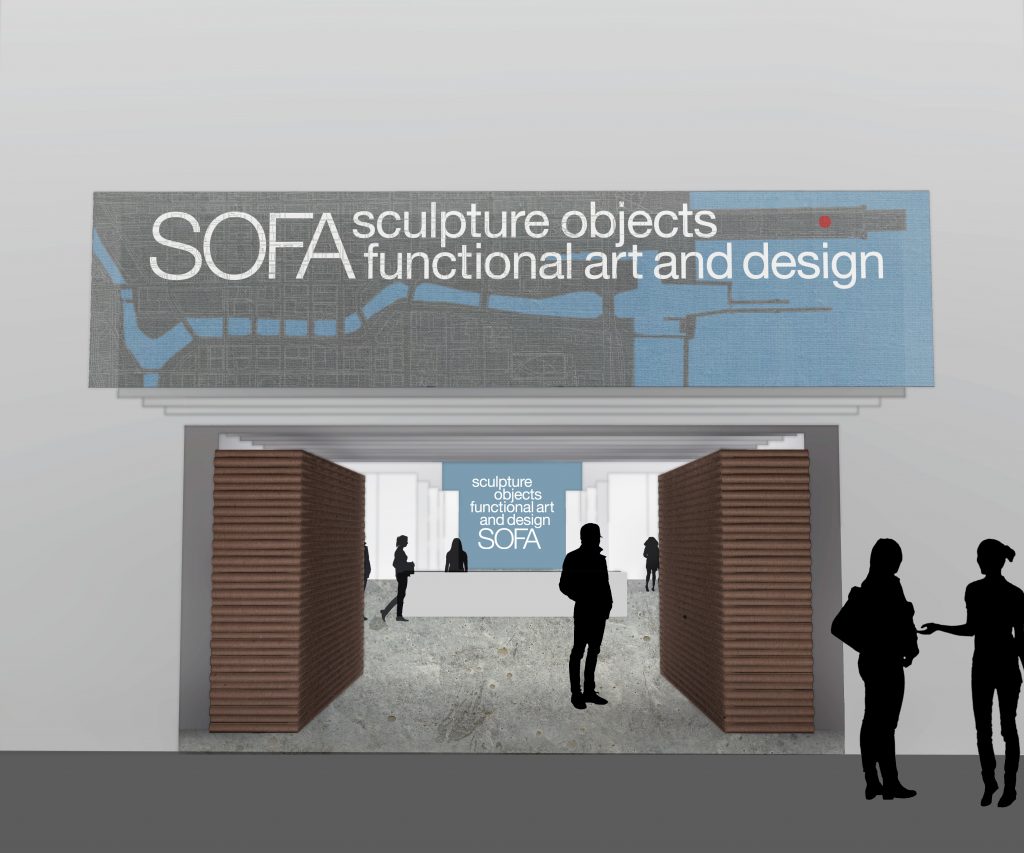 “Once you’re entering the show floor, it’s important for people to have a sense of arrival, so we wanted to create a real entrance—physically building a structure—instead of just using Navy Pier’s giant rollup door,” Noel said.  WRAP devised an archway, of cardboard tubes and mylar, which “gets to our conceptual underpinnings” that emphasize sustainability and, not coincidentally, jibe with themes of the contemporaneous Chicago Architecture Biennial, Noel said. They looked for readily-available material to incorporate, such as the cardboard tubes which ordinarily would be thrown away. “Taking a simple, common waste product and using it in an interesting way really makes a statement about the power of design,” she said.

The primary change in the floor plan involved breaking up the long aisles with breaks so that the exhibitors’ booths are separated and almost every booth seems to be on a corner, rather than the old model that made it feel as if the booths were sandwiched together.

WRAP’s involvement with SOFA this year went beyond just design; the firm was instrumental in bringing one of the more special “special events” to the show: an exhibit of work by Rural Studio, the architecture workshop of Auburn University founded by Samuel “Sambo” Mockbee and famed for  an “ethos of recycling, reusing and remaking,” as well as serving populations that are typically underserved by design.

During the year of the Chicago Architecture Biennial, and its attendant exhibitions and panels on the theoretical side of the architectural practice, SOFA shows off the practical side of a local firm working—and problem-solving—in the city.