Have you been to Union Station lately? For most who go there, it’s in a rush to catch a train to the ‘burbs, while a few will wait in the crowded concourse for an Amtrak train to St. Louis or Milwaukee, or maybe even to New Orleans. But very few spend time in the Great Hall, which is the grand and long-neglected entryway to the old station. 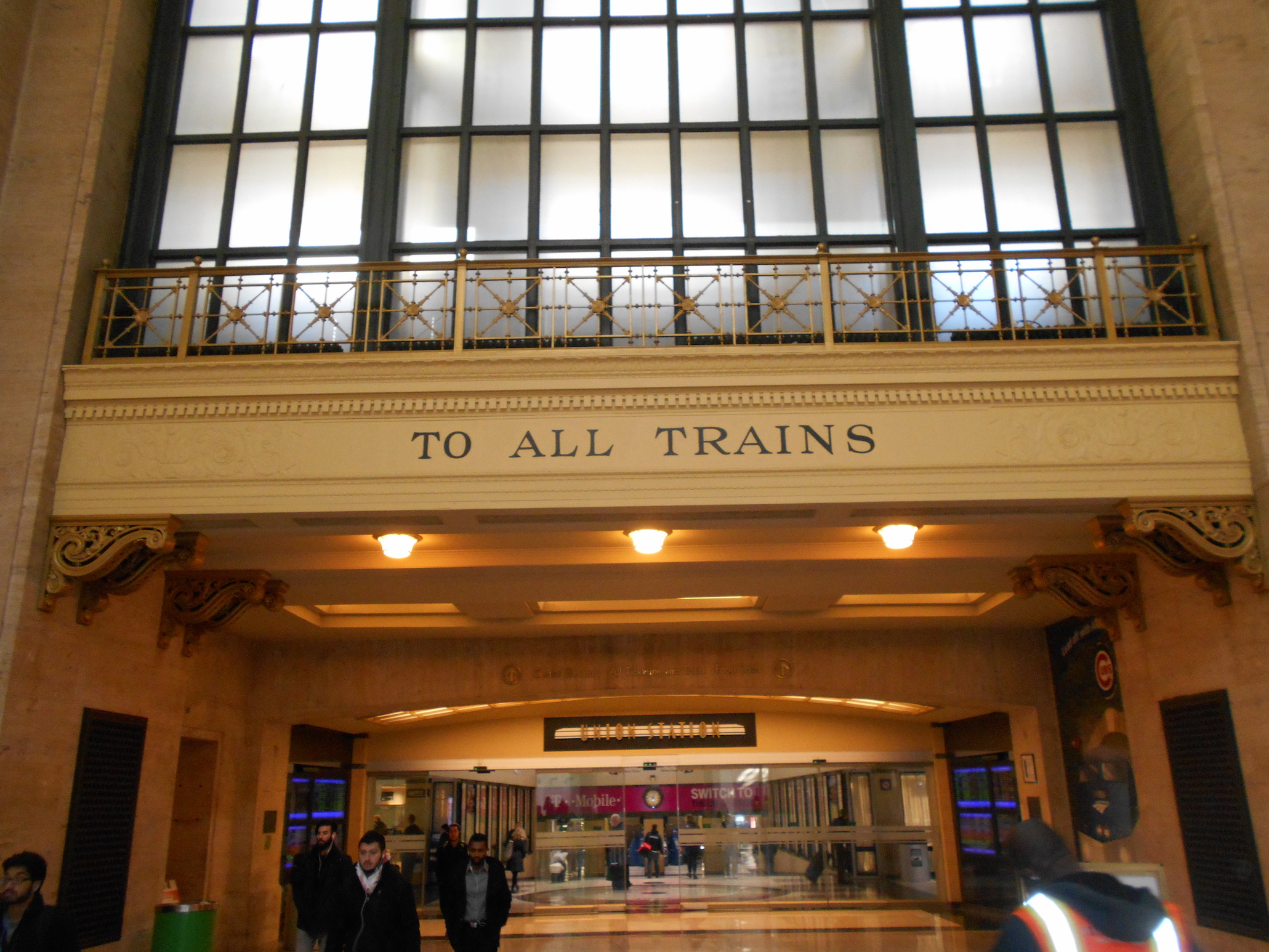 “It’s the most unappreciated great space in this city,” says Rick Harnish, director of the nonprofit Midwest High Speed Rail Association (MWHSR). A rail advocate and train lover extraordinaire, Harnish praises Amtrak’s plans to upgrade the old station, beginning with a revitalization and repurposing of the Great Hall. But he and other rail advocates want to make the station into something much bigger. For them, the key to understanding Union Station is to see it as much more than a train station. Its importance rivals the airports; it’s a critical node linking Chicago—and the whole Midwest—to the world.

Union Station’s owner, Amtrak, has ponied up money to restore the station’s most famous elements:  the great colonnaded entry along Canal Street, the marble staircases leading down to the huge, echo-filled hall, and the magnificent skylight 115 feet above the stone floor. The staircases have been refurbished with marble from the same Italian quarry that gave the original stone for them, when the station was built in the early 1920s. Work will soon begin to refurbish and open up the barrel-vaulted skylight, infusing the marbled space with soft light. And Amtrak will reopen long-shuttered entrances and closed-off and hidden sections of the massive building, making new lounges and waiting areas to welcome passengers into the Great Hall again.

This work is just the beginning. Mayor Emanuel and leaders of the Regional Transportation Authority (RTA), Metra and Amtrak have announced the next phase. Gathered in the Great Hall last month, they spoke seriously about improving the way the whole station works. Their plan encompasses thirteen “medium-term” projects that should greatly improve the passenger experience and access to trains and, perhaps, lay the basis for even grander planning ideas in the future.

Improvements will focus on the real throbbing heart of the complex across Canal Street, in the concourse and platforms where all of the tracks come in—eighteen tracks from the south and thirteen tracks from the north—to this great terminus. Some 300 trains move in and out of the station each day, serving more than 100,000 passengers (eighty-five percent are Metra riders with the rest on Amtrak). It’s the third busiest train station in the country, after Penn Station and Grand Central in New York City. And it’s a crowded, confusing space with limited entrances including a commuter entrance off Adams Street that leads through a frenetic fast food passageway.

To open this up, the plan will push a lot of the ticketing functions and passenger waiting areas back into the Great Hall, where they were originally intended to be. It will push aside the bulky escalators at the Canal Street entrance to the concourse, making a nice mezzanine space there while opening the flow of movement between the concourse and the Great Hall. It will create new entrances along Canal and Jackson streets that lead straight down to the platforms and the trains. All of this should greatly ease access for daily commuters. 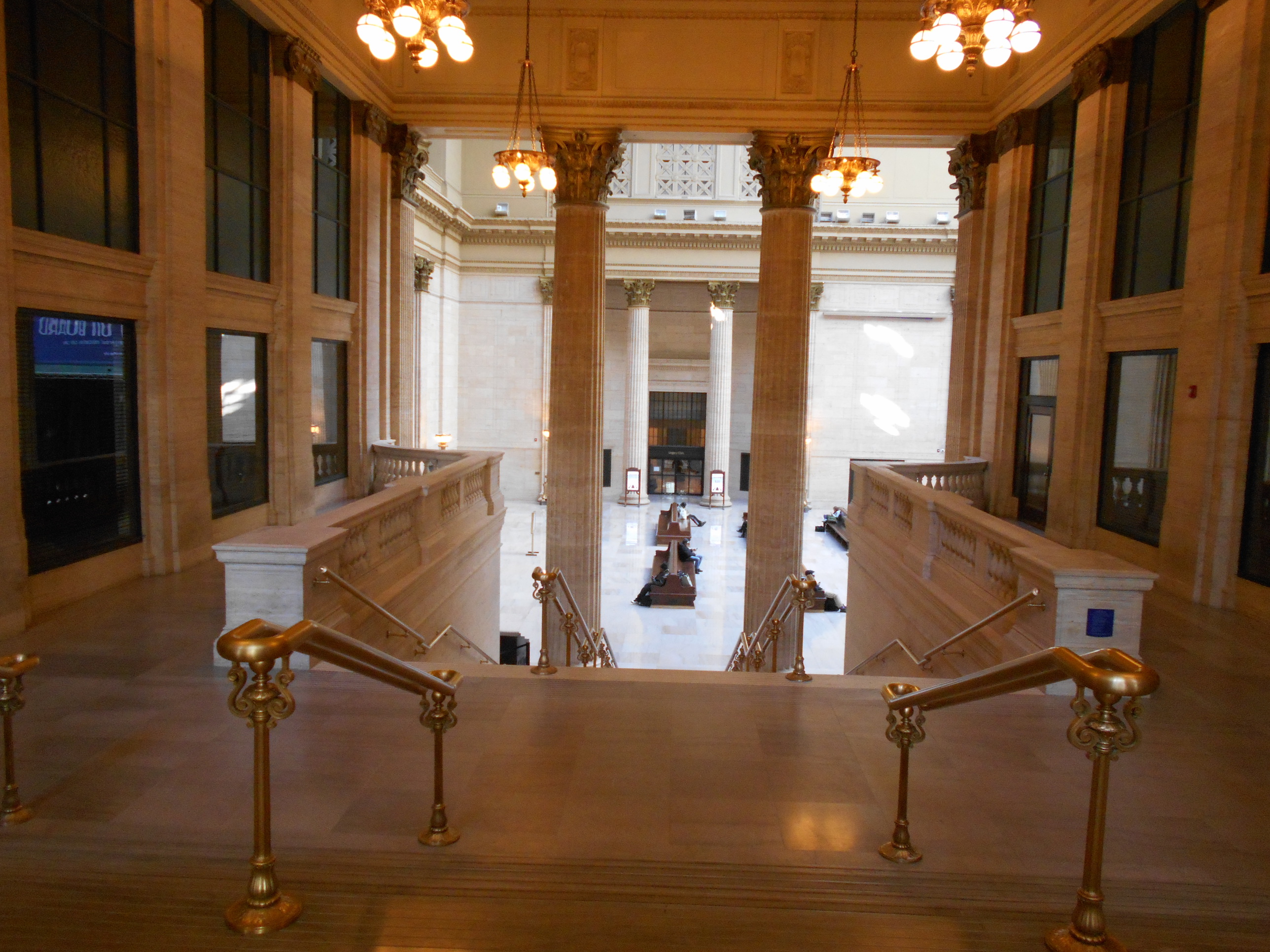 Stairs to the Great Hall. Photo by Alan Mammoser

The plan goes to the guts of the station, to the train tracks themselves. It will take out old luggage platforms between the tracks in order to realign some tracks and make wider, more spacious passenger platforms. And it will convert two old mail platforms no longer used which border the south platforms along the Chicago River. These will become passenger platforms, with a steam tunnel renovated into a passageway leading to them. It’s here, along the river, that some tracks actually cross from the south to the north side of the station, in a little-known pass-through that has inspired rail advocates to come up with creative new schemes for high-speed rail and other services.

Finally, the medium-term plan will at last make a link to the Blue Line, albeit through a long tunnel leading to the Clinton Street station. It’s a long-overdue effort to link the CTA into the regional and national rail system. What few remember, however, is that the old Garfield Park El went right over the south platforms, and this key connection was lost when the line was abandoned in 1958 and replaced with the Blue Line in the Congress (now Eisenhower) Expressway.

When all of this work will actually get underway is anybody’s guess, because the current call for bids includes just initial engineering and design. But Amtrak and its partners are taking the planning a step further, asking developers to submit ideas for redeveloping the whole vicinity around the station. Such proposals would probably include new hotels and commercial activities.  Any schemes put forth will probably include some sort of value-capture scheme that will help to fund the station’s renovations.