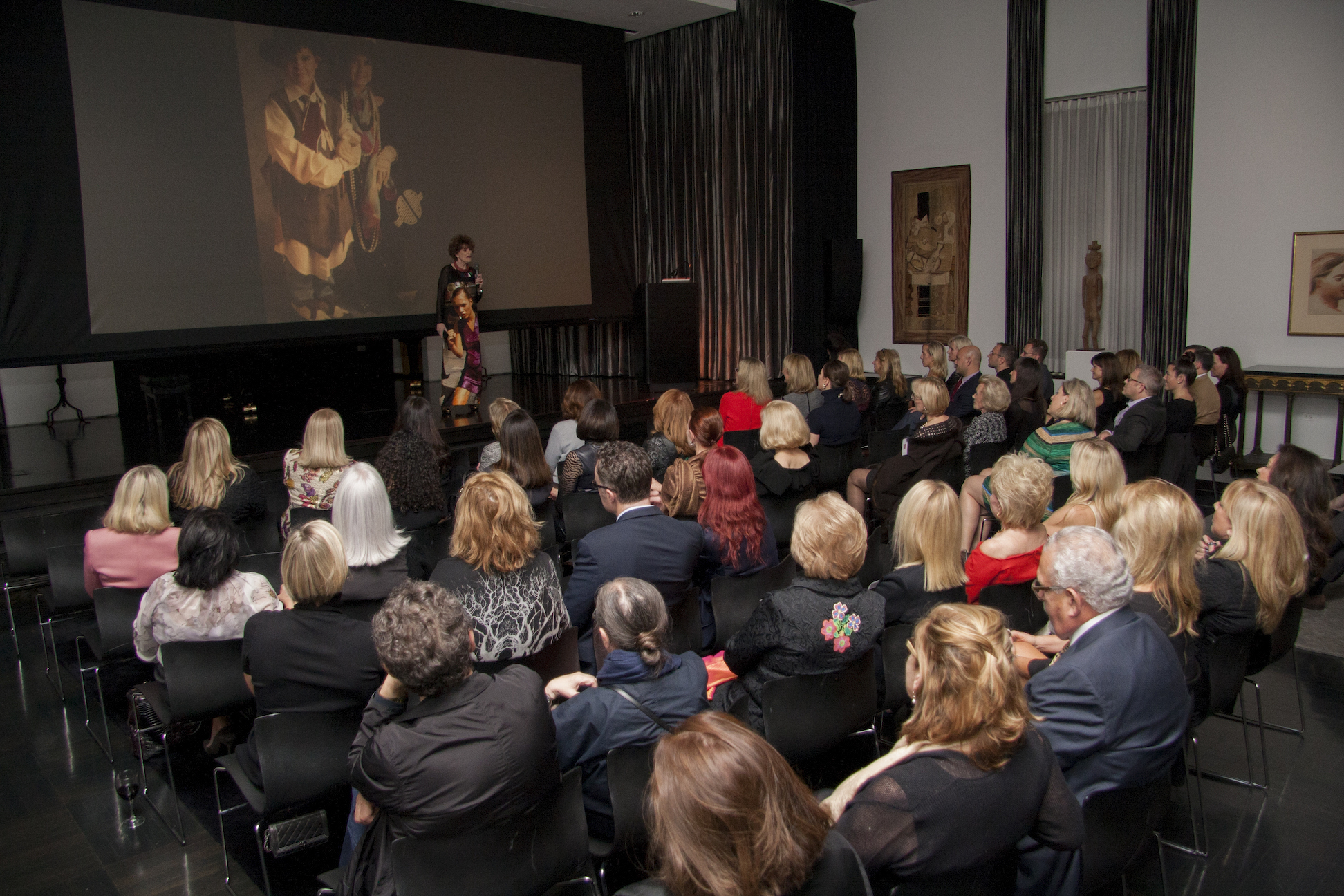 Sandy Schreier at the Arts Club

“I never played dress up the way most young girls do,” declares Sandy Schreier, as her bizarre and fascinating life story starts unfolding at an evening of fashion, champagne and elegance at the Arts Club of Chicago. The extremely well-dressed woman is the world’s largest private collector of couture clothing. The Detroit-born-and-bred legend owns more than 15,000 museum-quality pieces of French couture, American fashion and Hollywood costumes, including some of the most iconic pieces of the twentieth century. She’s also a fashion historian, who has assisted curators of various costume exhibitions at museums worldwide, and the author of three books, “Hollywood Dressed & Undressed: A Century of Cinema Style”; “Hollywood Gets Married”; and her forthcoming autobiography, “Desperately Seeking Fashion.”

“I have Rita Hayworth’s dress from ‘Gilda.’ I have the purple silk pants and blouse that Claudia Cardinale wore in ‘The Pink Panther.’ I have the metal-mesh dress Twiggy wore in the famous Richard Avedon photograph and Zsa Zsa Gabor’s dress from ‘Moulin Rouge,’” says the fashion connoisseur who has designed costumes for the Supremes and accessories for Yves Saint Laurent. To explain how “Little Sandy from Detroit” ended up holding the history of twentieth-century fashion in her hands, Schreier gave the audience a sneak peek into her life—a life full of elegance and extravagance alongside Hollywood celebrities, princesses and soap opera stars.

Reminiscing with a crowd of the city’s fashionistas and culture buffs, Schreier shared lively anecdotes and facts about her early life in Detroit, her philosophy of “collecting fashion as an art form,” and stories about her favorite Hollywood movie stars, their marvelous costumes and the designers behind them. 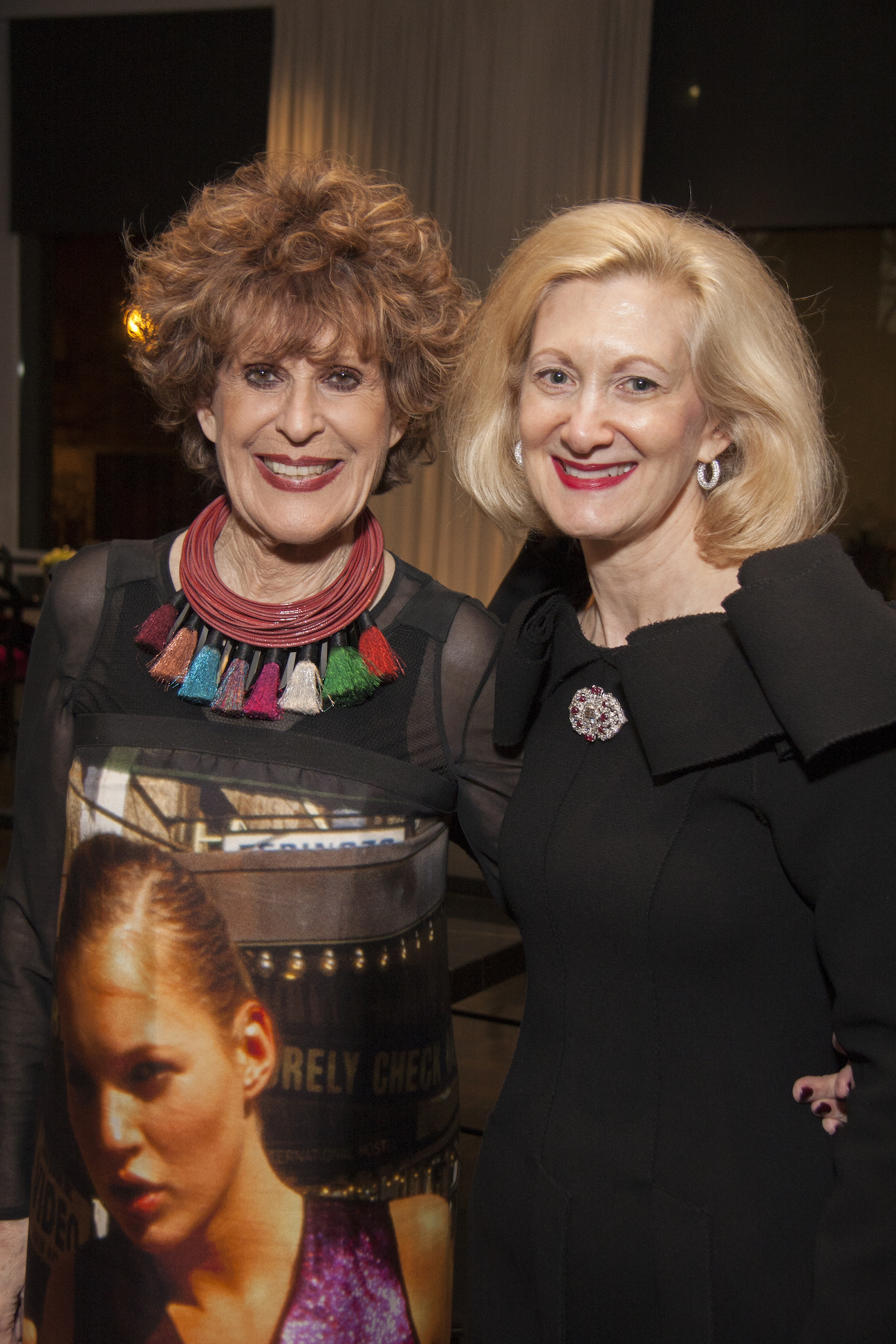 “I’ve always been interested in fashion because of Daddy,” she said. “Daddy” used to work for David Nemerov, photographer Diane Arbus’ father, who owned Russeks, one of the first high-end department stores in downtown Manhattan. Russeks used to dress elegant women from all over the states and specialized in fur coats and designer fashion. In the meantime, by the late 1930s, outside of New York, Detroit was wildly growing into a fashion capital, then a thriving hub of commerce and industry built around the need to keep the automotive industry wives happy. With enormous wardrobes and expensive taste, the Fords, the Chryslers and the Dodges would often travel to Europe for luxury fashion and exclusive designs.

Encouraged by Nemerov to learn the craft of making fur coats, Schreier’s father moved his family to Detroit to head the newly opened fur salon at the Detroit Russeks. Accompanying her father to work on Saturdays, Schreier was exposed to the world of fashion, flamboyant clothing and her future bibles—Vogue and Harper’s Bazaar.

The Detroit fashionistas loved little Sandy and her wild curls that reminded them of Shirley Temple. Soon, they started bringing her their outmoded dresses and accessories—holding on to last season’s fashion was then considered passé. Schreier would carefully store the often-unworn gowns in her closet and since then, has never stopped collecting. “Some people dream of having a big swimming pool. With me, it’s closets,” she says, quoting Audrey Hepburn, but adding—“bigger and bigger closets.”

Her collection has avalanched into more than 15,000 pieces. “Basically, if the designer is important to the history of fashion, I collect him or her,” she explains. Museums around the world have shown interest in her collection. Select pieces of Schreier’s—ranging from the late-nineteenth century to the contemporary—have been exhibited at the Louvre, the Victoria & Albert Museum, the Hermitage, the Metropolitan Museum of Art and the Art Institute of Chicago, among others.

Schreier claims her success to be born out of serendipity—simply being at the right place at the right time. Her humility still shines through; after all, she’s still young Sandy that had Elizabeth Taylor’s dress from “A Place in the Sun” copied for her high school graduation. Schreier’s collection has been the foundation for a fascinating life and a multifaceted career, which takes a lot more than beautiful clothes to build. Schreier’s beauty is in her strength, determination and witty personality. Beyond her nonpareil collection, the things she really leaves us with are her playful Shirley Temple curls, her honest smile and her true love of fashion.