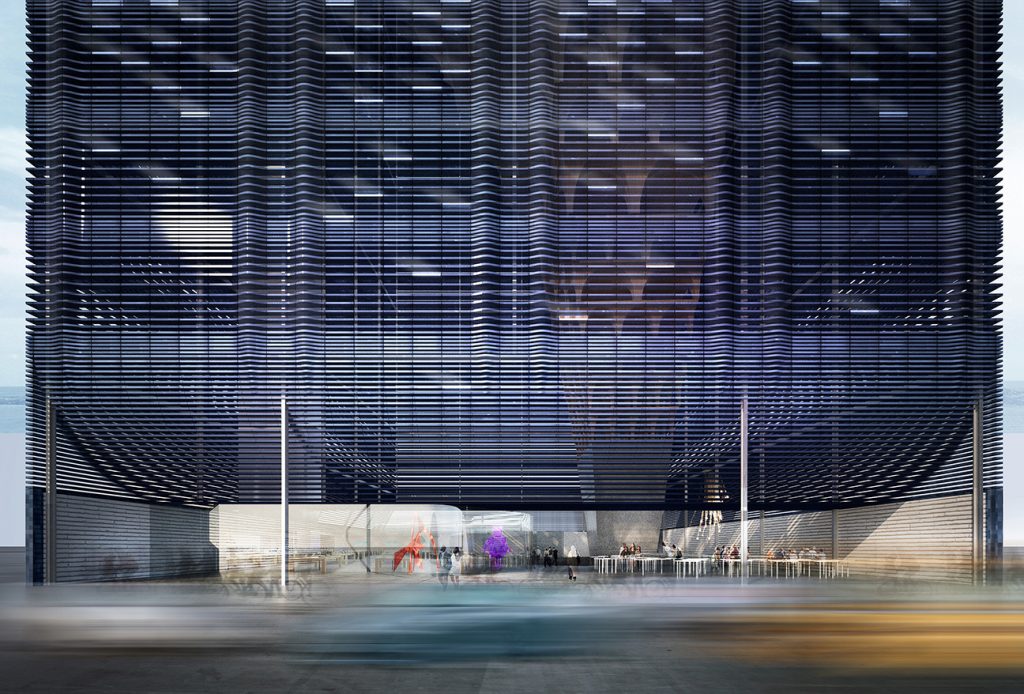 In 1922 Colonel Robert McCormick, who for decades presided over the Chicago Tribune as editor and publisher, launched a worldwide design competition for a new building to headquarter the newspaper. Of more than 260 entries, New York architect John Mead Howells won the $100,000 prize (about $1.5 million today), with Finnish architect Eliel Saarinen’s more forward-thinking design taking second place. McCormick, who had served in WWI, was a steadfast isolationist.

Competitions like this have a history more than 2,500 years old (both the Acropolis and the dome of the Florence Cathedral were the results of design competitions), and the Chicago Architecture Foundation (CAF) recently unveiled the winners of its own such contest, ChiDesign. The foundation’s first-ever open, international competition called for designs for an imagined learning campus, the Center for Architecture, Design and Education (CADE).

The theoretical facility would encompass new headquarters for both CAF, which currently lives at 224 South Michigan Avenue, and the Council on Tall Buildings and Urban Habitat at the Illinois Institute of Technology. The CADE would be a place to prepare the next generation of “stewards for the built environment,” CAF writes, with a design and allied arts high school. The center would also be one of learning for other generations by housing CAF’s visitor center and exhibition spaces and offering programming for students outside of school, all-in-all accommodating 600,000 visitors annually.

Anyone could have submitted a design, with the stipulation that each proposal’s “language and symbols should be simple, direct and free of architectural jargon.” The hundred-plus entries are part of an installation in CAF’s exhibition space through January 3. The competition is a way to up the nonprofit CAF’s public profile during the Chicago Architecture Biennial. But the organization is also driven to “inspire people to discover why design matters,” and collectively these designs seem to point toward changes in the thinking around architecture, including its meaning in a broader cultural context. A $10,000 purse was split equally among all winners.

One of the winners, “Unveiled,” by Michael Ryan Charters ?and Ranjit John Korah, uses its core as its defining design, made up of wooden-arched units that taper at the top and bottom, so that a sort of cone shape extends from one corner on the ground floor to the opposite corner at the top of the building. It’s surrounded by veil-like terracotta latticework that mimics the shape of its neighbors. Particularly when lit externally, the façade looks very much like a traditional glass and steel skyscraper, but at night the façade is nearly transparent, revealing a structure within that is dramatic, yet somehow warm and organic.

The cone shape inside the curtainwall is made up of a series of wooden arches that combine “column and beam, wall and ceiling,” writes the duo, “beginning an important dialogue with the steel-framed glass towers that surround it.” Simply imagining such a building in an area claustrophobic with tall rectangles brings a sense of relief. 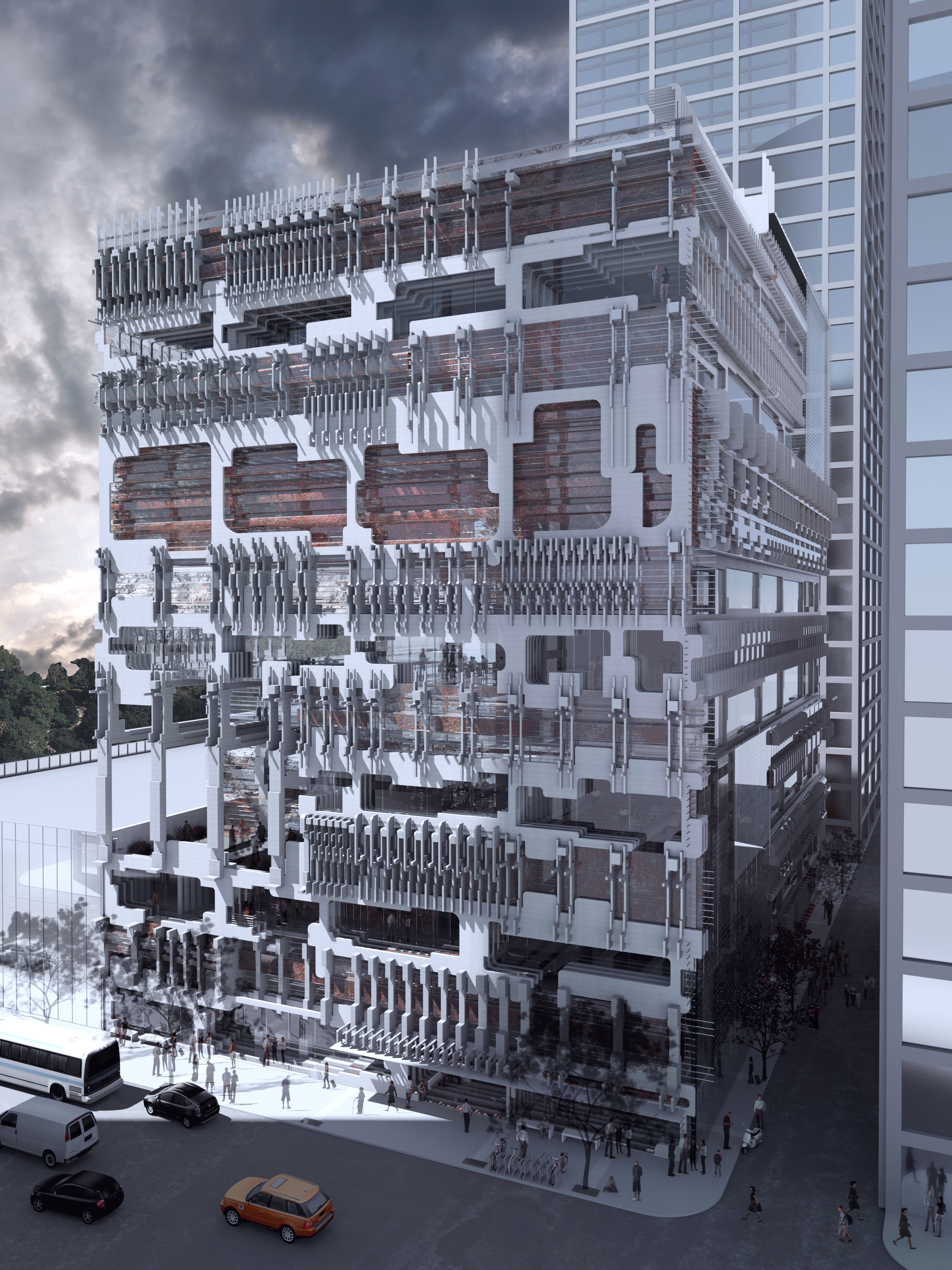 The winning project, “Layered Intelligence,” by mcdowellespinosa, proposes a twelve-level cubic structure with a façade both cacophonous and alluring. The disorderliness of its jagged geometric outcroppings and the variety of sizes in the open parts of its curtainwall reflect how the space within is devoted to four entities: according to what each of them does with information. A few levels are devoted to the spaces for presenting information, a few to producing it, and a few to consuming it. That means parts of each organization are mixed together in each section.

The design also incorporates a material innovation involving human hair encased in a silicone composite. The material “transmits light throughout the building while the hair particles create a visceral screening system,” writes the firm. The hair would come from salons, which in the U.S. discard more than $2.5 million worth of human hair annually, according to the U.N.

Organic thermal insulation or not, visible human hair in the structural elements of the building risks creeping some visitors out. But splitting up the organization of the building into programmatic pieces could bring visitors into contact with some part of each of the four. Good for marketing, maybe difficult for practical use.

“Each learning, working and exhibition environment is calibrated to allow for fluid interaction between the programmed space and the public circulation,” says Seth McDowell of mcdowellespinosa. “This allows for an open, collaborative environment. Privacy and control is achieved by the rhythm and density of the building’s contours.” The interior looks complicated, perhaps needlessly, depending on one’s taste. More than 500 unique profiles are layered upon each other, “each calibrated to specific program requirements and environmental stimuli, allowing for an incremental system of control.” 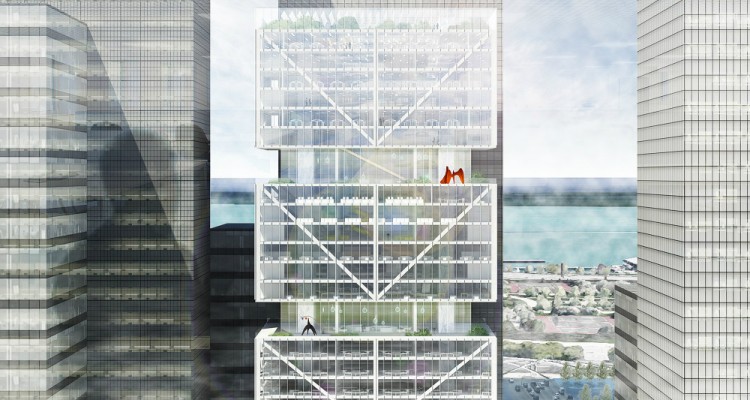 “Soft in the Middle,” by Atelier 2B

Winners Atelier 2B (Nicolas Lee, Yewon Ji, Ryan Otterson) submitted “Soft in the Middle,” probably the most inviting of the winning designs. The very (and admittedly) Mies van der Rohe-inspired skyscraper is to be sure a different take on Mies’ designs, but to be so unabashedly and directly inspired by one of Chicago’s most iconic architects seems, frankly, played out. Not so, apparently. “Soft” proposes a “radical rearrangement,” says Lee, of central elements in Mies’ work.

The building’s core is divided into three separate sections devoted to the different organizations in the CADE. Each consists of half a dozen floors, all open to each other at the core, with sections extending out from the façade. This “Collaborative core” is finally a resolution, the firm writes, of Mies’ “universal space,” something which in his own towers, “was never fully resolved.”

The CADE may never be built, and it might not use the winning design, even if it were to be. But just over one-hundred proposals were entered in ChiDesign, many by young architects, and many of their designs seem, like Saarinen’s Tribune Tower, to be getting at something of architectural import, even at something new.

Correction – 12/9/15: This article initially stated that only the first place winner received the $10,000 prize. All winners were awarded equally.