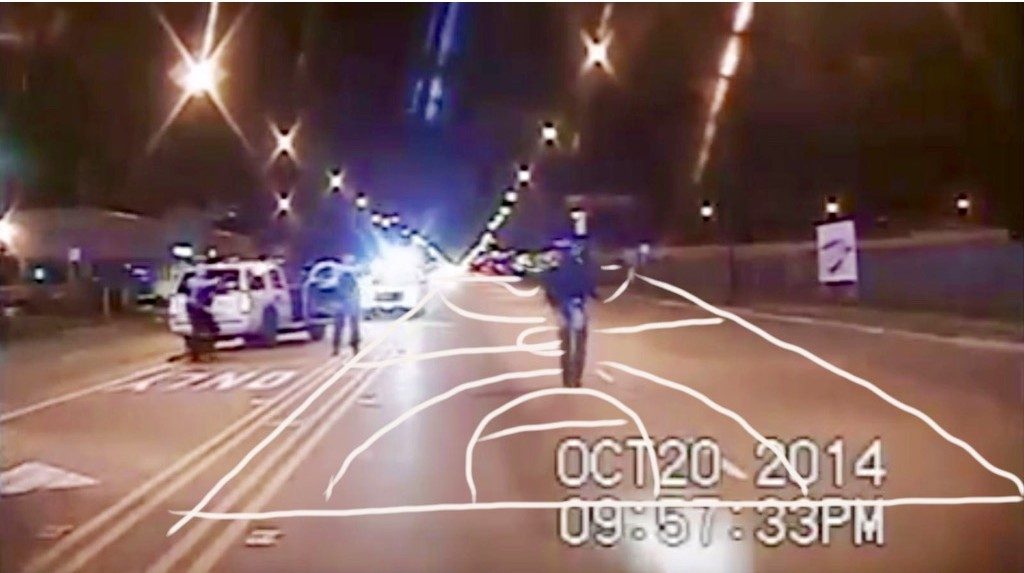 Studio Gang, Jeanne Gang’s architecture firm, believes in basketball. They envision a future where basketball diplomacy unites Chicago’s black communities and the Chicago Police Department (CPD). Should improving “relations” between these groups be the designer’s responsibility, especially after the police murder of Laquan McDonald?

Studio Gang’s Chicago Architecture Biennial installation is used to posit a design to do just that—improve community-police “relations.”  The project, titled “Polis Station,” takes inspiration from recent events in Ferguson and Philadelphia as well as President Obama’s 2015 Presidential Task Force on 21st Century Policing report, a handbook on managing an increasingly diverse and unequal America. In terms of evidence, “Polis Station” relies on analysis of police-station building types, charrettes and interviews with academics.

The “Polis Station” exhibit is displayed in two parts on the sides of a Chicago Cultural Center staircase as part of the biennial. One side is used to present a history of police-station building types. As outlined by Studio Gang, stations have evolved from the 1700s watch box and the 1960s “fortress station” to the 1980s “civic station” and current complexes characterized by Gang as “little more than a jail.”

Research on building types is aligned with a chronological word narrative. Specifically, Studio Gang, in small print, underlines, for example, the link between building type, police function and slave patrols restraining wayward chattel. Tying building type to police function with non-architectural design elements, the exhibit points out the 1958 introduction of side-handle batons, just in time for the civil rights movement.

Technology has come to matter, as with the 1966 rollout of a network connecting police computers nationwide. As noted by Studio Gang, the policed also use technology like the cellphone video capturing the 2009 murder of Oscar Grant by Bay Area transit police. And technology, like dashboard cams demanded by activists, now hold police accountable in new ways as in the recent case of Laquan McDonald.

Within this context, Studio Gang presents its vision for a twenty-first century police station—that isn’t really a police station. On the other side of the staircase, a fully rendered idea of Gang’s “Polis Station” is inserted within the North Lawndale community. “Polis Station” is actually taking shape in North Lawndale with a built basketball court on CPD property. 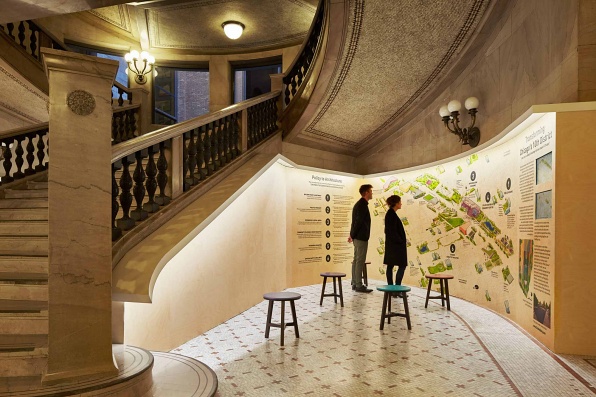 As referenced in the 2015 Presidential Task Force report and echoed in “Polis Station,” neighborhoods across America like North Lawndale need, amongst other things, social housing and services. Studio Gang wants to “turn all police stations into community centers.” Former sites of repression would “be reoriented toward their communities and become sites of social connection.” “Polis Station” would be a place “where officers and neighborhood residents can find many opportunities to interact.”

New police stations as community centers might host computer labs where free Wi-Fi would be available (for improved police surveillance). There would also be “shared athletic facilities for physical fitness and fun” amongst other “amenities.” To extend community beyond the station, centers, in a new police urbanism vein, would be proximate to “restorative gardens and green spaces to foster [the] psychological wellness” of police and those policed.

However, Studio Gang incompletely translates the Greek used to name the project. “Polis” can connote “community” and a community of citizens.  In Athens, as in the North Lawndales that Professor Ice-T might say don’t look like America, not just anybody can be a citizen, much less an equal citizen.

Several generations of social scientists have been wary of “relations” to characterize contact between institutions like the police and communities of color. In “Race Relations: A Critique,” Stephen Steinberg asserts that the term “relations” placed after “race” blunts the historical and structural underpinnings of U. S. racism; “relations” suggests that racism is a resolvable misunderstanding. Recent books on race and policing by Andrea Boyles (on a black community in a mostly white St. Louis suburb) and Ana Muñiz (on a Los Angeles Latinx neighborhood) restate Steinberg’s point, which is a relatively core social science assumption.

Using social dominance theory, Felicia Pratto and James Sidanius would suggest that a “polis station” renders fundamentally unchanged community-police interactions marked by hierarchy and everyday police aggression, such as the event that lead to the murder of Laquan McDonald—not so much by a policeman but by an institution. This is the case even when police and policed share racial affinity.

Complicating “relations,” Dan Kahan and Tracey Meares (a member of the 2015 task force) claim that it’s easy for Hyde Park academics to tell racial minorities how to associate with police. Kahan and Meares contend that poor black communities with persistent security concerns think about policing and rights differently.

Considering the above, is it the designer’s responsibility to improve “relations” between communities of color and the police? Or, as Raphael Sperry problematizes the work of architects designing “supermax” prisons, is it socially irresponsible for designers to “improve” the “criminal justice system” without recognizing and acting upon the historical and structural power differentials shaping this system?

There are three things architects should remember when handed a politically charged brief like that handed to Studio Gang designers.

First, when architects focus upon building type, they must acknowledge the problem of oversimplification when attaching meaning directly to a building type. As postmodernists have repeated, there is more than one way “to read” a building just as “reading” contact with the police is perspectival and dependent upon variables like race, class and their intersections.  This is particularly important for designers and police to grasp by the year 2043—when, according to the U. S. Census Bureau, no group will be able to claim racial majority status in the country.

Finally, it is important for architects interviewing academics who, for example, study police bias to realize some things about academic work.  Academics reflexively ground their work in previous scholarship. Relatedly, they can also reflectively interrogate their methods and the political impact of their work in interdisciplinary ways in books like “Race, Ethnicity, and Policing,” a collection of essays about the “relationships surrounding race, ethnicity, and the police.”