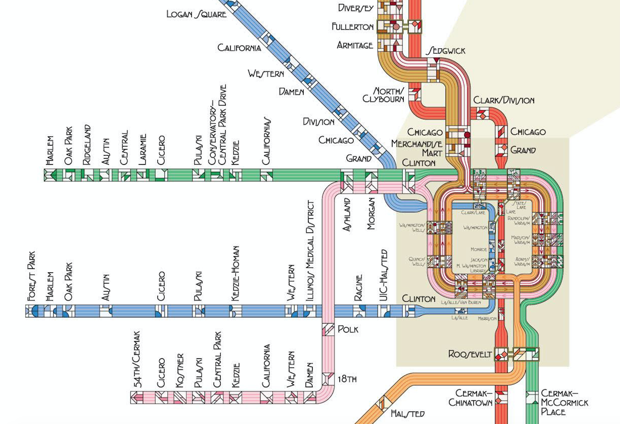 Along the coast of England, just north of London, Dr. Max Roberts lectures in psychology at the University of Essex. His research focuses on “the individual differences in the strategies that people use to solve problems, their causes and their consequences.” His research into cognitive psychology—and the underlying processes of problem solving and reasoning—has led him to the schematics of transportation and the maps which represent these systems.

Roberts takes each system as a challenge and an opportunity for optimization through design. Having mapped systems from Vienna to Tokyo, Chicago caught his eye as an opportunity to pay tribute to the geometric aesthetic of Frank Lloyd Wright. Pale, milky, like sunlit glass, his map of the Chicago El system envisions each line through a stained-glass pattern, with each station as a singular panel.

We recently spoke with Dr. Roberts via email; an edited version of the conversation follows.

To start with, how do you choose the transit systems that you’re working on?
There are all sorts of reasons: It’s a complicated network that presents an interesting challenge (New York, Tokyo). It’s one that I have used, and found the official design difficult to use, urgently needing fixing (Paris, Berlin). It’s my home city (London). It’s an appropriate setting for a decorative map celebrating a famous designer/architect (Glasgow, Chicago).

What is your process of actually creating the maps? What drafting and coloring tools are essential to you as a mapmaker?
It varies. But I get the station names on paper first. I get the basic line trajectories on paper, adjust and simplify until I’m happy. I usually start at difficult parts of a map (multi-line transfers) and work outwards. The best designs simplify reality, turning complex line trajectories into simple straight lines, without excessive geographical distortion. I usually keep a geographical map handy to make sure I am not going too far. Once I am happy with the basic design, I smarten it up and finish it off. 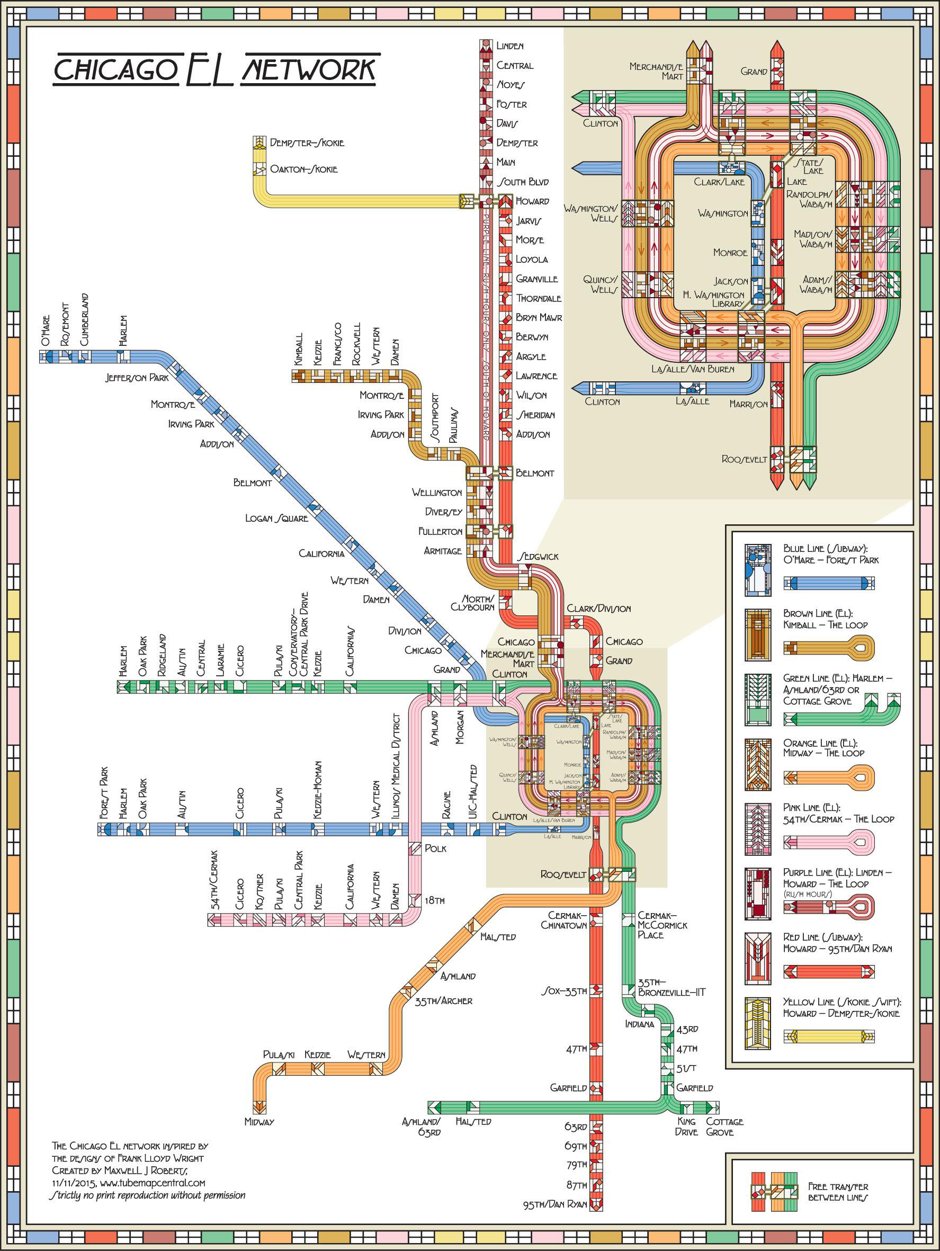 What strikes you as unique or particular to Chicago compared to other transit systems that you’ve worked on? Did it provide any unique challenges to creating the map? How, for instance, does Chicago’s city grid play into the map?
Of all the American cities with large historic networks, Chicago has the most rigorous grid structure. In parts of New York, you get wandering boulevards and avenues that seem more like extra-wide farm tracks than organized streets. What this means is that if you get into a fight with the Chicago grid, you end up losing.

I wanted the Frank Lloyd Wright map to blend in with Chicago seamlessly, and so I let the natural grid organize and structure the design. Chicago natives will see a couple of places where I’ve twisted up a few things, but that’s always with a reason. I take the calculated risk that no one in reality is going to be misled. Take away the decoration, and it does a nice job of showing the basic shape of the city as neatly as possible.

How does a cartographer strike the balance between visual appeal—branding a visual guide for an entire transit system—and usability?
This design is treading a fine line, but the strength of the underlying structure is carrying it, so it can withstand the decorative usability abuse that I have applied. Strip off the decoration, change the font, and you have an excellent map. Normally, I would never recommend a decorative map for everyday use. For pure usability, designers believe that the frivolous ornamentation should be stripped away—the Bauhaus rules on that one.

The apps are moving in, and fewer and fewer people are using traditional paper maps to plan journeys. But then, if a decorative design captures attention, draws people in, offers them something grand and spectacular that a mobile phone app never could… if it makes them more likely to learn the shape of the city and to use the El in the future, then maybe this map is a wake-up call to cartographers.