In a previous article, we looked at how one of Chicago’s great unappreciated places, the Great Hall of Union Station, will be restored to its intended role as an elegant passenger waiting area through a joint plan from the station’s owner, Amtrak, along with the Regional Transportation Authority (RTA), Chicago’s Department of Transportation (CDOT) and Metra.

The improvements, called “medium term” as part of the Union Station Master Plan, will go to the guts of the station, realigning tracks, widening platforms and opening new platforms with a waiting area beneath them. Stairways going directly down to the platforms will open on Jackson and Canal Streets. All this should relieve crowding for a few years and put a new gloss on the old station.

“This plan will just get the station up to a minimum acceptable level, simply a state of good repair,” says Richard Harnish, executive director of the Midwest High Speed Rail Association. “It hardly begins to provide what’s needed for the future.” Problem is, there’s not enough money—even for the medium term fix. So for now, agencies have promised funds only for preliminary engineering and design.

What Harnish and other rail advocates want is a new strategy, one that strives to lift Union Station into the ranks of the world’s great train stations.

“The basic problem of Union Station,” says blogger and transportation gadfly Robert Munson, “is it’s a terminal station, a late nineteenth-century design that can’t meet twenty-first-century needs.” As a great terminus of the golden era of railroading, Union Station is a place where trains come to a stop. Tracks come in from the north, and tracks come in from the south, and the concourse stands between them, strategically placed on the edge of the central district. So passengers either leave the station, or change trains, or go back out on the same train they came in on.

What’s needed is to bridge this gap and link the two sides, which would effectively link the different sides of the city—and the region—together. Doing this will give people an enormous number of potential new connections. But it would be a massive project. How to begin? Harnish sees an opportunity in two little-known tracks on the far east side of the station, on a thin strip of ground running along the Chicago River. These tracks actually pass through from south to north; they once carried train traffic that connected Milwaukee to St. Louis.

These little-known and nearly forgotten tracks are the key to CrossRail Chicago, a major cause of the Midwest High Speed Rail Association to expand the region’s train network. CrossRail would transform Union Station from a terminus into the center of an expanding circle of regional connections, with new access to O’Hare Airport that links the region to the world. With the use of those two tracks, the construction of a few key connections on the Near South Side and a new station at O’Hare, the whole network becomes greatly expanded. South suburbanites and McCormick Place convention goers will quickly reach the airport, while Rockford residents will ride one train all the way to Champaign, making stops at O’Hare, Union Station, University of Chicago and other key points along the way. 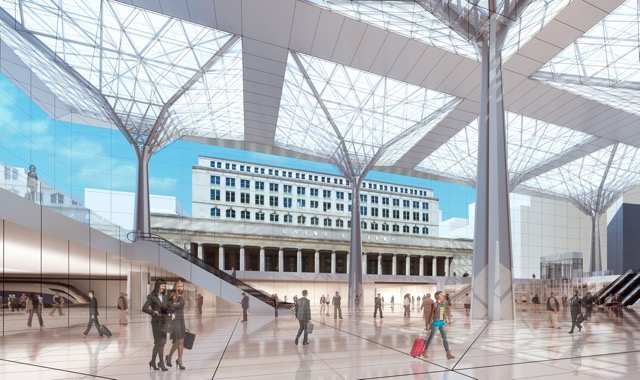 Could this be the “new” Union Station? Rendering via Midwest High Speed Rail Association.

For more than fifty years, European cities and planners have been successfully boring under and joining up their old terminal stations to make far more efficient metropolitan transit networks, in an effort known as “through-routing.” Through-routing can put many more people through a train station while making it much more efficient and easier for them to get where they want to go.

“Basically, you’ve got to bore a tunnel under Union Station,” says Harnish.  This would collect everything together in layers, bringing together the busses on the street, Metra’s regional trains, the CTA subway and, down below all these, Amtrak’s intercity trains. And when European or Japanese-style high speed trains finally come (in our grandchildren’s lifetime, we hope), the whole system will be powered up at this vital point called Union Station.

To integrate it all, Harnish would demolish the office tower that currently holds air rights atop the concourse, replacing that with what he calls a “mixing bowl” concourse. It would be a huge, open and naturally lighted room where people would easily find their connections amongst the multiple gathered transit systems. But Munson frets about money; how to pay for it all? He and other thinkers on the topic of finance have some good ideas. We’ll consider these in our next story.