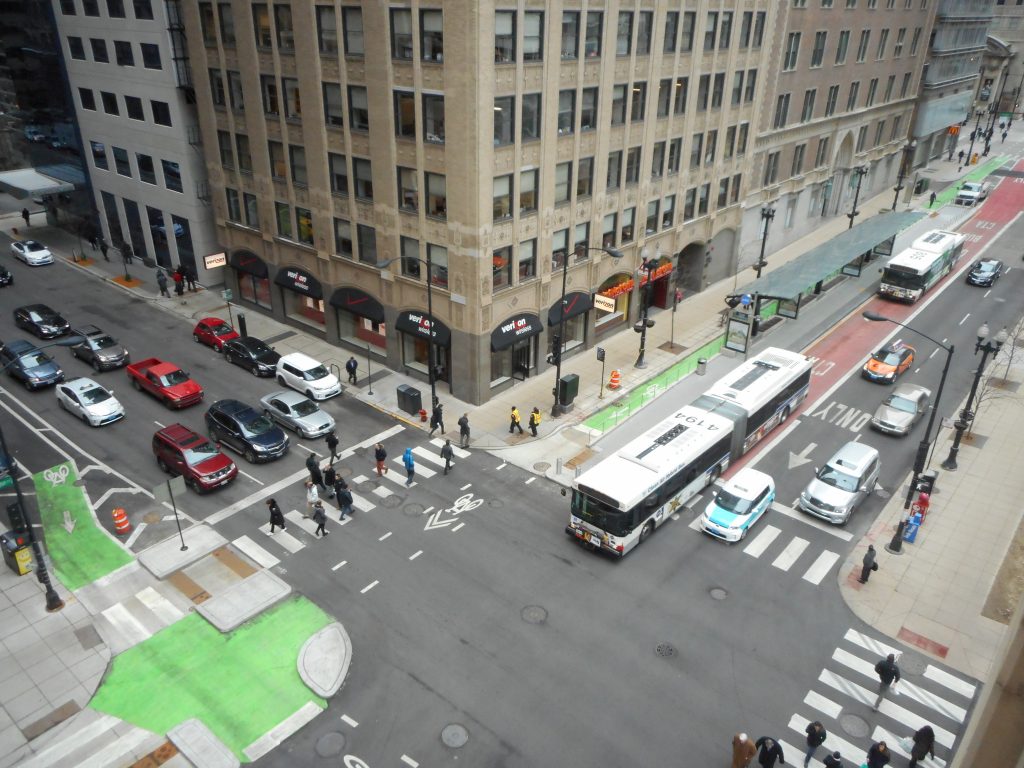 Chicago’s new Loop Link bus rapid transit (BRT) system has brought a focused intensity on design and reinvigorated streets in the Loop. The product of the CTA’s long-term planning strategy (CDOT and the CTA function in parallel on transit infrastructure projects), the stations were designed by architecture and infrastructure powerhouse AECOM, with design directly overseen by Ross Wimer, AECOM’s global president of design. Black steel and glass canopies give the structures a reserved and muscular elegance, an expression incarnate of Chicago’s restrained design language and Midwestern attitude. The painted steel structure references Hancock and Sears Towers and Mies van der Rohe’s legacy of structurally expressive construction—no surprise given Wimer’s nearly twenty years spent at Skidmore Owings and Merrill. Delicate perforations in the steel fins supporting the canopy interpret Chicago’s famous basque bridges while advancing a refined modern aesthetic. The glass canopy creates mediated light with a simple frit pattern that calls to mind the Chicago sky on a thick summer day. These elements all work harmoniously with their immediate and regional context, less a declaration of architectural ostentation than a humble affirmation of good design, careful detailing and an obsessive attention to tectonics. 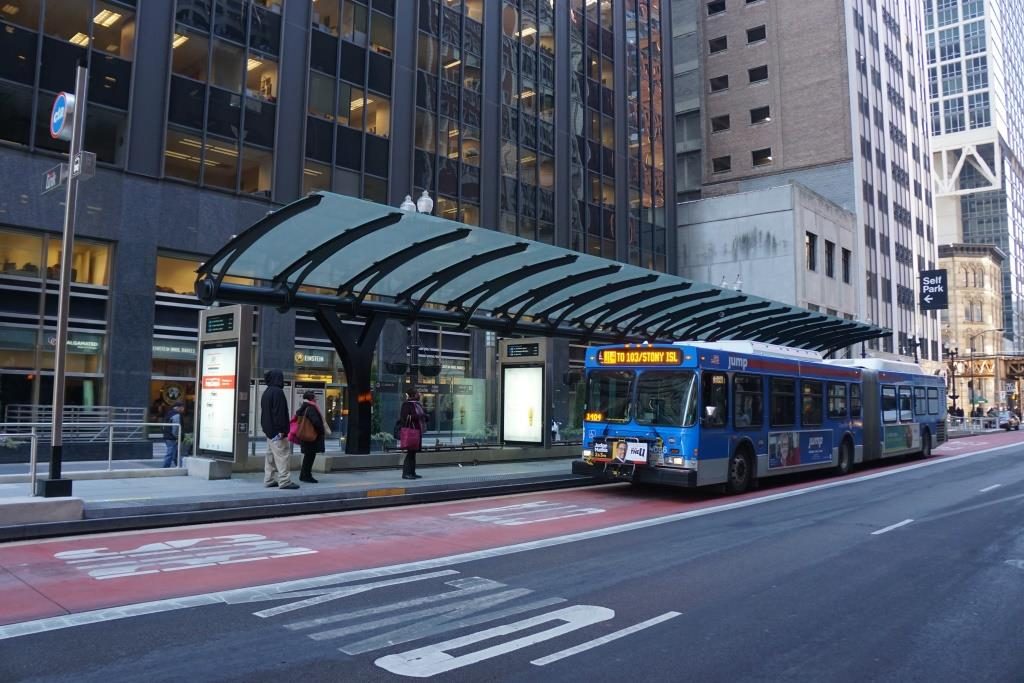 The design and implementation of the actual transit system, though, is less straightforward than the architectural expression of the stations. Although the new stations serve only the central downtown area, they are part of CTA’s longer-term plan to expand BRT around the city in order to connect neighborhoods and better serve the South and West Sides. This will certainly be a valuable stop-gap measure, but it comes about not because the city has demonstrated BRT to be superior to other forms of transit (the buses on the Loop Link line were averaging only three miles-per-hour in the first month of service as Blair Kamin so pointedly critiqued), but because the city lacks the financial and political will to fund service expansions to its once (long-ago) world-class train system.

The CTA, like much of city government, is fighting just to stay alive and effective amid a bleak financial outlook. Add to this the State of Illinois abdicating budgetary responsibilities for services citizens depend on and it is a wonder a project like this was completed at all. Yet this does not excuse the agency, local government, or the citizens of Chicago and Illinois from taking responsibility for the environment we all help to create. The CTA has proposed bringing all Chicago rail stations into compliance with federally mandated Americans With Disabilities Act standards by 2036, forty-six years after the act was first passed. Leadership of CTA has flatly dismissed any rail service expansions due to constrained finances, even while Mayor Emanuel pushes for an enormously expensive high-speed rail link to O’Hare Airport. Station improvements throughout the CTA’s network have been taken on slowly, if not deliberately. Yet the inescapable law of entropy continues to degrade Chicago’s infrastructure faster than it seems we are willing to rebuild it.

Chicago did not become the progenitor of the skyscraper, nor seed the germ of modern architecture and urbanism through piecemeal efforts and limited vision. Chicago (and much of the Midwest) was once known as the center of American productivity and commerce, but that time is long past. While projects like Loop Link are incremental steps toward vitality, it is everyone’s responsibility to decide if little plans are enough to reaffirm the city’s eminence and repair our decaying infrastructure and torn social contract, or if it will take greater vision to stir our collective blood.