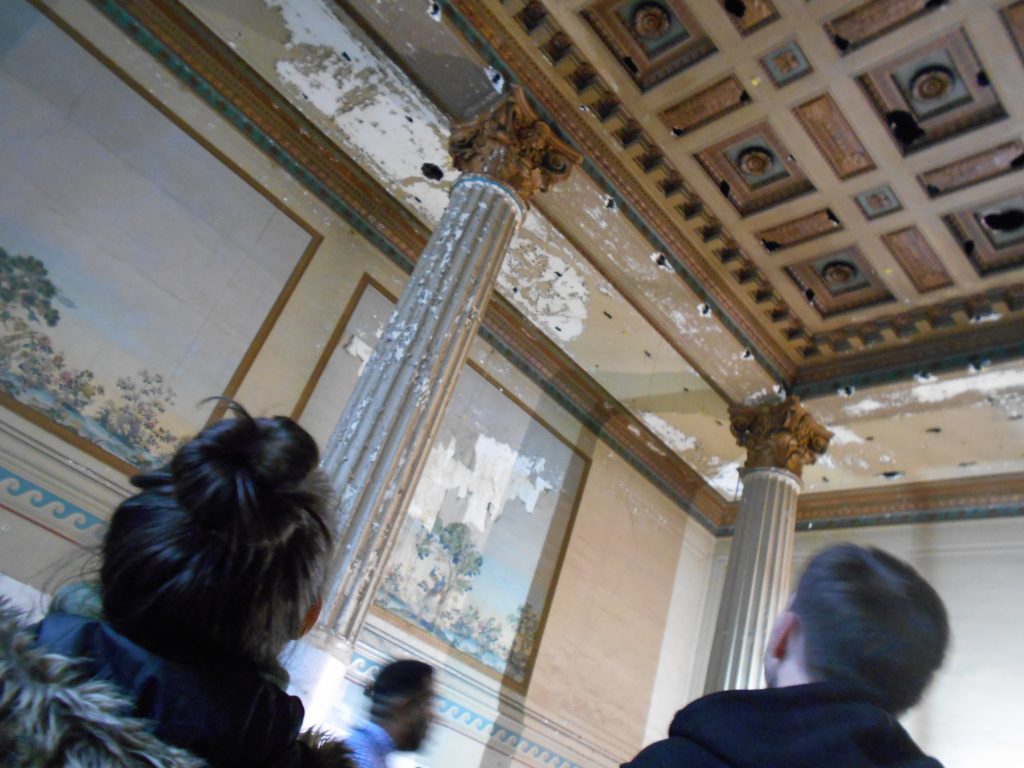 The former Women’s Waiting Room will be restored as a large event space in Union Station.

In two previous articles about Chicago’s Union Station, we looked at plans for the crowded concourse and passenger platforms hidden beneath a high rise along the Chicago River. For the third part of this series, I went across Canal Street to the station’s “headhouse,” the porticoed 1920s building that contains the famous Great Hall. The headhouse is mostly empty now, but it holds a lot of memories hidden away in dark, cavernous spaces behind old walls and doors. Now the owner, Amtrak, wants to bring it back.

My tour group, led by Ray Lang and Paul Sanders of Amtrak, walked through big chilly rooms that fell into disuse decades ago. We saw the huge space of the old Fred Harvey restaurant, which once held white-clothed tables amidst great columns. The thirty-three-foot ceiling hints at its former grandeur. We went into the vast room that was the Women’s Waiting Room, where the crumbling plaster ceiling and peeling wallpaper murals are now under restoration. We walked across the Great Hall to the elegant little barbershop now beautifully restored. Then, from the passage to the concourse, we looked into another big space that was once the station’s ticketing area. Next year it will reopen as the new bi-level Metropolitan Lounge. 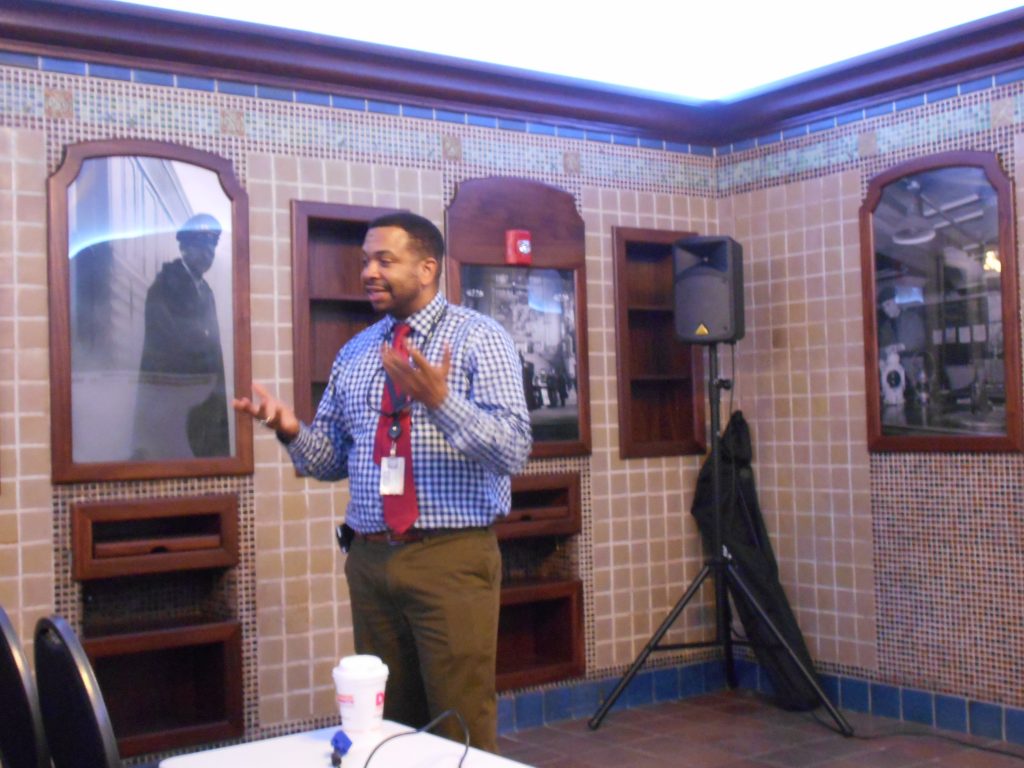 Paul Sanders explains the careful restoration of the barber shop in the former Men’s Lounge area.

The experience was a bit like looking into haunted rooms of a forgotten era. They’re from an era when four major railroads pulled their trains into Union Station, when the Pennsylvania Railroad was the biggest company in the world (the Google of its time), when its trains arrived and departed for New York every day. Union Station was the O’Hare of that era. Then came the airplane and the automobile and the once busy rooms around the Great Hall gradually fell into sad abandonment.

“There’s a huge resurgence of interest in Union Station, and we’ve never been more ready for development,” says Sanders. With new offices and apartments throughout the West Loop, he sees all the stars aligning to make the station a major destination again. But the building is so old, so much of another era, that the effort will be costly and require a careful work of restoration. Sanders emphasizes that the key to success is to bring back the building’s splendor. “This is a challenging building,” he says with a hint of irony, “so we’re just going backward to go forward.”

Amtrak, knowing it has a gem, has already put a good chunk of money down for this. It’s allocated more than $25 million of its own working capital and some Stimulus Act funds. To begin, it had to put chillers on the roof and get the Great Hall air-conditioned. Fire sprinklers were installed and asbestos abatement was undertaken. With these basics in place, new tenants could be attracted and beautification could begin. The marble stairs—seen most famously in the 1980’s film “The Untouchables”—have been restored with new marble from the same Italian quarry that gave the stone for the first stairs. Soon, the long skylight high above the marble floor will undergo restoration. 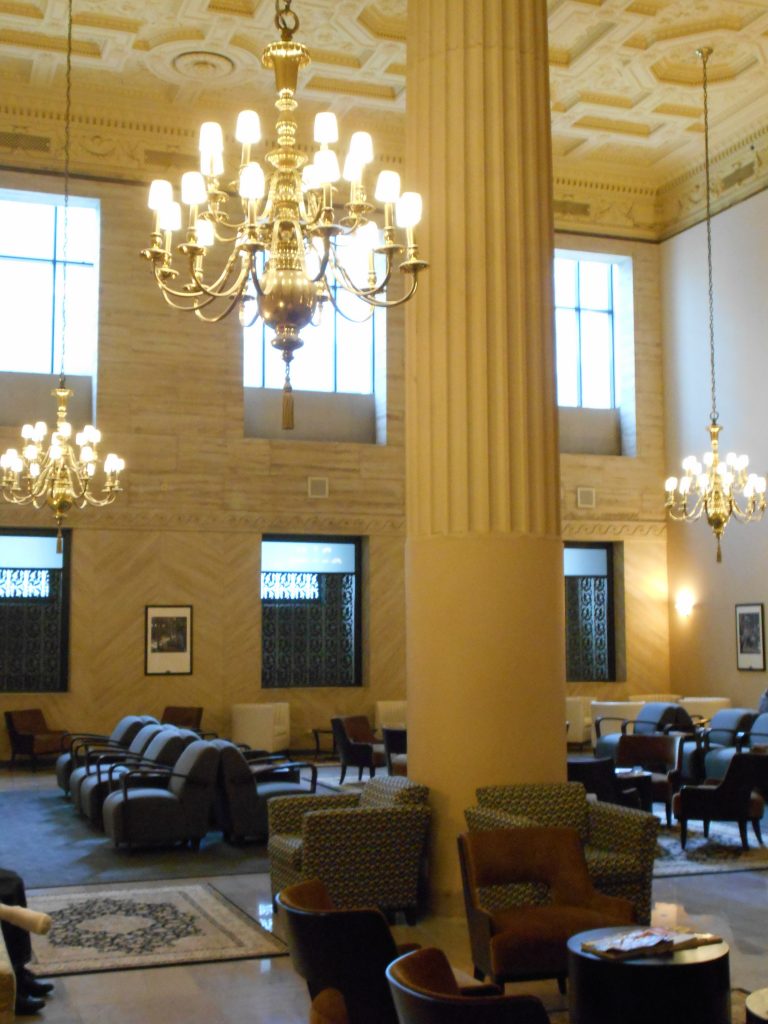 Restored elegance: the new Legacy Club for train passengers in one corner of the Great Hall.

To finance the continuing renovation, Amtrak will rely on the building’s continuing allure to attract tenants. The company will seek rents from a restored Women’s Waiting Room, which, Sanders says, will become the largest non-hotel meeting room in the city. The barbershop, with beautiful brass lamps, wood paneling and restored tile (all barber chairs and sinks removed), will serve as a more intimate meeting room for rent. And in the new Metropolitan Lounge, Amtrak will roll out the red carpet for train passengers, with two levels of rest and relaxation areas outfitted with the latest communications conveniences. A hallway will lead from there directly to the concourse.

Another big part of it is restaurants. At a recent discussion hosted by the Metropolitan Planning Council, developer Jeffrey Shapack and restaurateur Chris Bisaillon spoke excitedly about the possibilities of the station’s grand spaces. Bisaillon, whose Bottleneck Management opened Howells & Hood in the ground floor of the Tribune Tower three years ago, knows something about the challenges of putting vibrant new restaurants into old buildings. Shapack, currently investing in Chicago’s Fulton Market District, said that a big need is to open an entrance to the headhouse on Clinton Street. A new entrance there would break through the cavernous space of the old Fred Harvey restaurant, opening rich opportunities for creative restaurant design. It would also open a clear line of movement to begin drawing people through the Great Hall, as they went from Clinton Street to the concourse and back.

Finally, Union Station can go higher. The headhouse, as designed by D.H. Burnham & Company, was built to accommodate the construction of another twelve floors above it. It seems like the perfect spot for the city’s next fancy theme hotel. Put a casino in the old Post Office nearby, and you’ve got a destination in the burgeoning West Loop.

Such is the thinking on how to make an old train station flourish again. And given time it may well work. But restaurants and hotels will fall far short of providing the financing needed to make Union Station a critical node in an expanded regional transit system that serves Chicago in the twenty-first century. That’s a question of planning on a much larger scale, which we’ll take up in the next article.