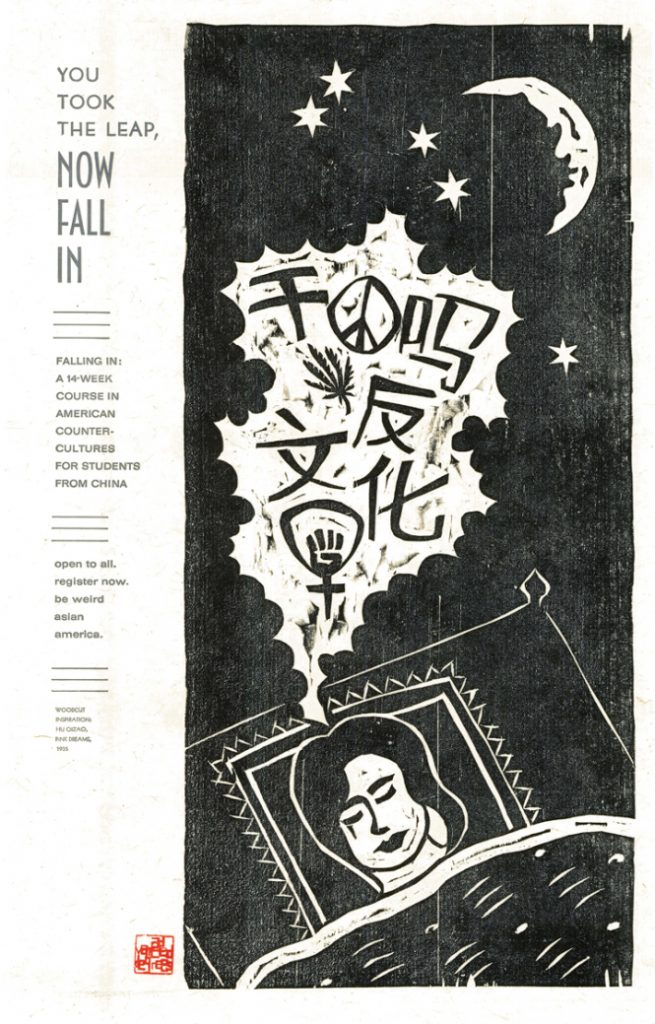 It’s no small task to ask those who style themselves activists and social-change agents to engage intersectionally, not to mention integrate that degree of social consciousness into a design ethic.

Consider the challenge: communicating intersectionality—the study of overlapping factors in the codification, for instance, of social and biological factors, as relates to gender or race or class—requires an uncommon degree of emotional and intellectual rigor no matter the medium.

This, to some degree, is the implicit meaning behind the new exhibit, “Organize Your Own,” curated by Daniel Tucker, graduate program director of Moore College of Art and Design’s program in community art practice. We are asked: what happens when whites organize for civil rights on behalf of black people? How do we find a foothold in our own communities, and in ourselves, to support the rights of those different from ourselves?

The exhibit attempts to answer this question in numerous ways. For instance, local artist and longtime social activist Dan S. Wang’s woodcut and letterpress on Japanese paper titled, “Falling In: American Counterculture for Chinese Nationals,” compresses a fictional class syllabus (complete with attendant reading list) into one finished work. On the model here of participatory art—or what used to go under the name of “relational aesthetics”—is an engagement with the interactions suggested by the work, i.e. a degree of “activation” of the poster’s intended use, along with its constituent, attendant elements.

Wang’s poster, as do many of the works in this exhibit, elegantly demonstrates how that engagement is required before the shift can take place from imagination to reality. That’s where the “your own” of the title expands the question of for whom the activity anchored in the design benefits, since it pertains, ostensibly, to anyone. It’s a clearly intended ambiguity, meant as a prompt to self-reflection, and arguably to the necessity of active, intersectional reflection. Inevitably, countenancing this sort of self-awareness can sometimes be a messy business. Anecdotally, for instance, I once ran afoul of Chicago DIY venue The Dollhouse’s “feminist safe space rules”—really just because the group of friends who run the place felt like it. No matter how much I cried ageism, or bigotry, or sought to argue that equality ought to mean the Golden Rule, the fact was that smashing the patriarchy comes at a price to our already integrally compromised notions of universality. As one of the founders of the space succinctly put it, “I don’t care about men’s feelings.”

And so it goes in the realms of single-issue radical social readjustment activism. What then, to make of the engagement itself, as exemplified in pencil, watercolor and gouache on paper, a workday artist Robby Herbst depicting a t-shirt emblazoned with the text “I Used To Be A White American But I Gave It Up In the Interest of Humanity”? As artist Chloë Bass mused about the work at the exhibit’s Philadelphia opening, the “belief that we can shed privilege simply by choice [or even by choice and action] is naive and potentially harmful. But then again, what if it could be done? How would that relinquishing of privilege—and privilege based on phenotype—work?”

Whether or not that’s answerable, Bass suggests that maybe the mental game itself of guessing and trying to imagine it happening presents a useful exercise. Politics, all too often, can fail to conflate such abstract poetics, associations, compulsions, whether it’s a question of gender or, more relevant to this exhibit, the politics of race inequalities. What remains unavoidable for self-determination, and the movements formulated around them, is that we take stock of the selves we wish to determine.

Perhaps, in considering the necessity of thought-transformation in the effort to resolve the aporias of any claims to that sense of liberation, it might be useful to consider the solutions of solidarity. One of my all-time favorite quotes is from the great activist Eugene Victor Debs, a founding member of the Industrial Workers of the World, who was labeled a traitor for his conscientious objections to WWI conscription. “As long as there is a lower class, I am in it,” Debs said. “As long as there is a criminal element, I am of it. As long as there is a soul in prison, I am not free.” It’s a quote as relevant today as it was when he was locked up in the Atlanta Federal Penitentiary for dissent nearly 100 years ago, in 1918.

Organize Your Own: The Politics and Poetics of Self-Determination Movements at the Averill and Bernard Leviton Gallery, 619 South Wabash, (312)369-8687. Through April 9, Tuesday-Saturday, noon-5pm; Thursday, noon-7pm. colum.edu/adgallery/.