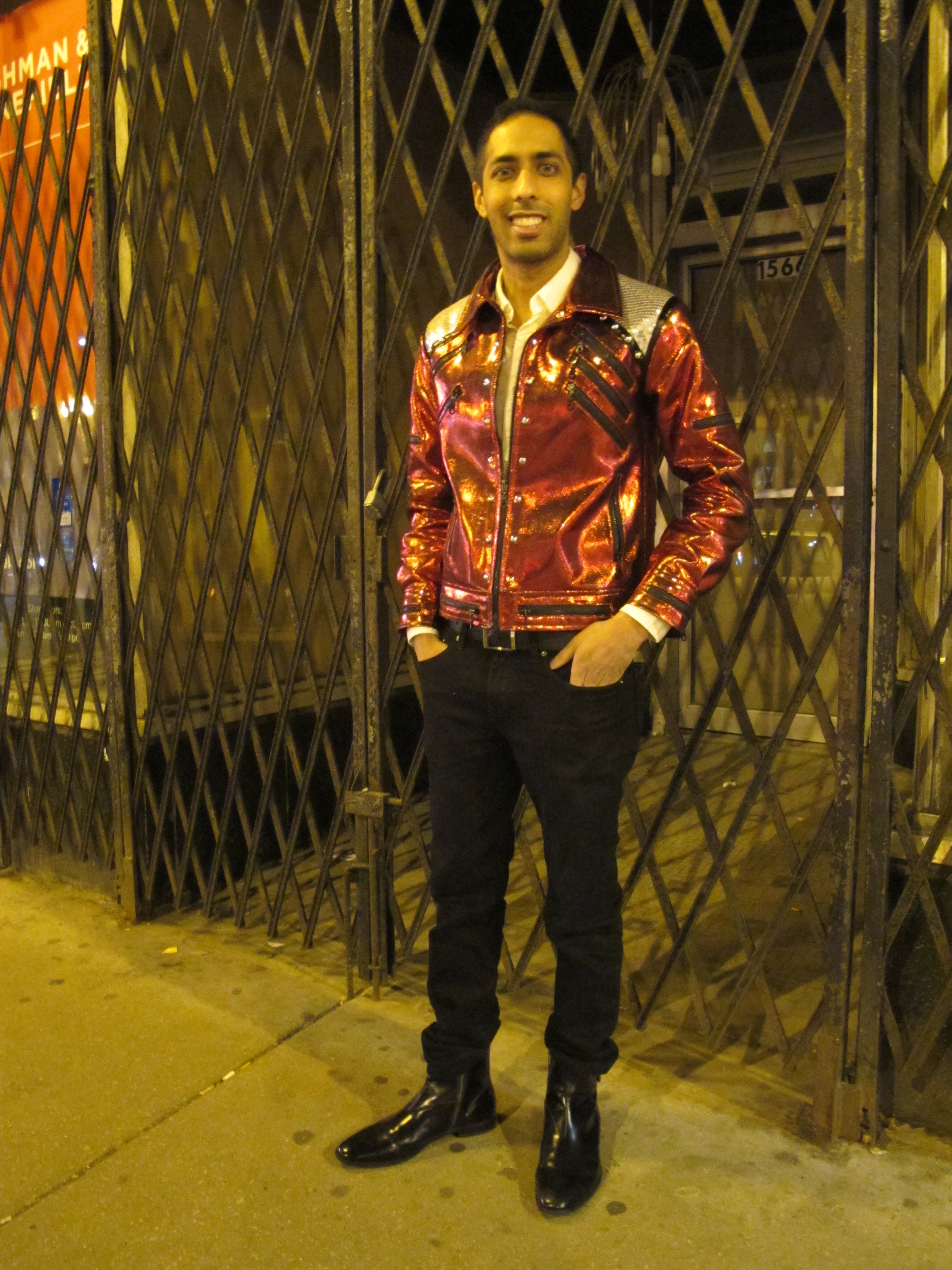 Attorney-at-law Jay Kumar (jaykumarlaw.com) was barhopping with some friends in Wicker Park. He is semi-famous around town for his outfits.

Could you tell me a bit more about your jacket? How often do you wear it? Where did you get it? How does it make you feel?
The jacket is a replica Michael Jackson “Beat It” jacket I got made for me online. I collect Michael Jackson jackets as well as other forms of eccentric fashion—from sparkly blue motorcycle jackets to shiny silver blazers and white tuxedos with studded ties. I almost always wear something interesting when I go out, and often during the day, though less flamboyant. This jacket is my favorite so I wear it the most—at least several times a month. I never feel like I’m a guy wearing a costume, I just wear things I’m attracted to that I think complement my personality and make me feel like myself. I get tons of people talking to me at bars and clubs so it’s a great conversation starter.

If you could wear anything to practice law, how would you style yourself?
For the most part, I do wear what I’d like to wear to practice law. I’m a fan of very slim fit, dark or grey three-piece suits with bright, solid or regimented pattern ties. I love to accessorize with tie-bars, pocket squares and watches. Most lawyers in state court don’t dress that well, so I like to look really sleek and put-together, especially to build credibility as a young lawyer whose opposing counsel are older. Men’s formal fashion is more or less a pretty dull affair without much variation so we tend to innovate in the small harder-to-notice details like the aforementioned tie-color/pocket-square combos.

Who inspires your work wardrobe? How about your party wardrobe?
I don’t think anyone in particular inspires my work wardrobe. It’s more or less a formalized version of my normal outfits. I dress with about as much edge as I can get away with in court. My “going out” wardrobe has an eclectic set of influences ranging from Michael Jackson, Johnny Depp, to hip-hop and goth and metal sub-cultures.

What’s your fashion philosophy?
I think fashion is one way for people to express themselves. You broadcast information about yourself whether you’re conscious of what you wear or not. I’m very confident, extroverted, bold and a huge risk taker, so I tend to be attracted to clothes that reflect that, although my overall look seems to elude categorization into any specific subculture and usually transcends class or race boundaries. I also have a performer personality—I’m a mentalist (a mind-reading magician who performs on stage) which fits a trial lawyer well. I love to talk to, persuade and entertain large groups of people. I’m an advocate of throwing aside conventional, arbitrary fashion norms, which serve to repress individuality. I think it’s important to be bold and craft one’s own identity.

—Interview and photograph by Isa Giallorenzo.