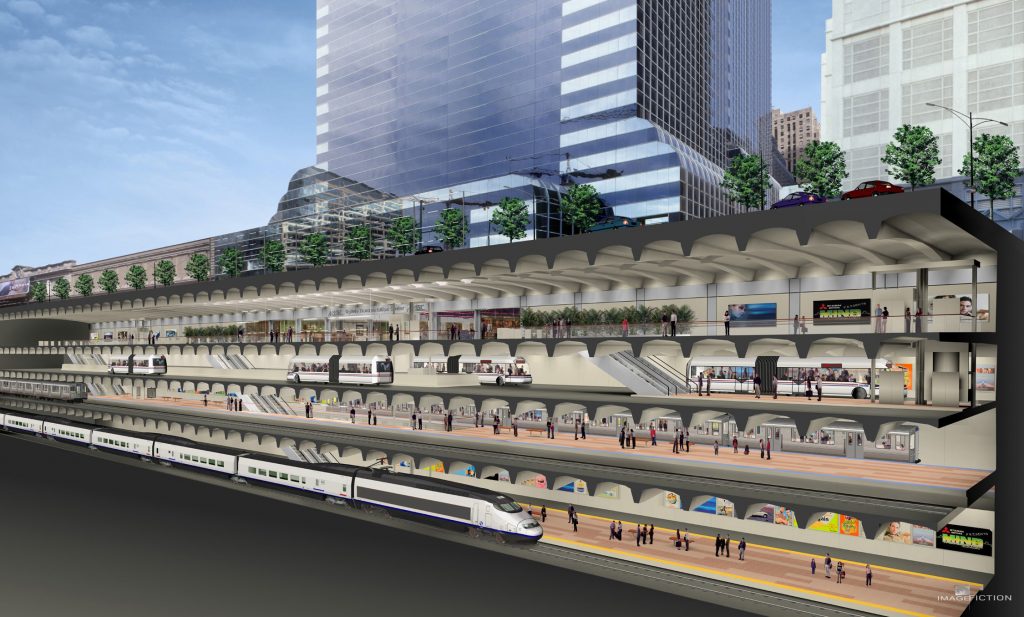 In three previous articles in these pages, we looked at planning for Union Station and its possible transformation. The City of Chicago, Amtrak and Metra are beginning upgrades to handle more passengers for the next five-to-ten years. To help pay for it, they’re remaking the old station into a new “destination” in the thriving West Loop. They want to see new restaurants and meeting rooms in its empty spaces, and a new hotel on top of it. But for a few train lovers and regional planners, these steps are hardly enough, and much more must be done for Union Station to serve Chicago in the twenty-first century.

“I applaud the mayor’s plan to transform that transit hellhole into a destination,” says civic gadfly and blogger Bob Munson, in his usual colorful phrasing, “but what he really needs is a strategy to fix the whole system.”

“Union Station should be one of the top infrastructure priorities of this city,” says Jon DeVries, director of the Marshall Bennett Institute of Real Estate at Roosevelt University and coauthor of the book “Planning Chicago.” To this he adds two more critical pieces: the need for a new branch of the Red Line to come under the West Loop, and for a “circulator” trolley or special bus service to link Union and Ogilvie stations to the rest of downtown.

DeVries has been watching, and sometimes participating, in the planning for the station’s redevelopment for twenty years. He’s seen several attempts to put all the transportation pieces together at Union Station. The circulator proposal began as an extensive street trolley network, became an underground bus network, and was finally diminished to a “Loop Link” of dedicated bus lanes on a pair of downtown streets. The Loop Link was finally finished this winter. Meanwhile, the Red Line proposal has languished. These initiatives faded as the city’s capacity for bold planning waned while its debt problems grew.

Munson suggests some basic steps toward a revitalized regional system centered on Union Station. First, open tracks through the station, to get trains from the South Side through Union Station with express service to O’Hare. This combines work on Union Station with an O’Hare express in a way that serves more of the city and region than would the city’s proposed Blue Line express to the airport. Then, link Union and Ogilvie stations, whose tracks come so close together yet remain separated. Finally, someday, build a third station by McCormick Place or over the rail yards south of Roosevelt Road.

Much of this is contained in the CrossRail proposal of the Midwest High Speed Rail Association. It’s also in the long-stalled plan for a West Loop Transportation Center (WLTC), which was proposed in the city’s Central Area Plan of 2003, and still remains in the regional list of approved major capital projects. The WLTC is a plan for a long tunnel under Clinton Street, running parallel to the two train stations and four levels deep.

A nice illustration of the WLTC appears in the city’s Central Area Plan. The first level is a concourse connecting the two train stations. Below this a “bus transitway” would connect to dedicated lanes going east to Michigan Avenue in a tunnel under Monroe Street, and north along little Carroll Street below the Merchandise Mart and out to Navy Pier. Below this is the CTA, either a short extension of the Blue Line under Clinton Street, or a more ambitious proposal for a new branch of the Red Line. Finally, deep down, is a tunnel to accommodate Metra trains and even high-speed Amtrak trains.

The bottom level would finally realize rail advocates’ dream of through-routing trains from south to north, bringing the whole region, indeed the whole Midwest, together in the West Loop with an express connection to O’Hare. It’s a big project that would transform regional transportation. The total cost would be $12 billion or more. Is it too big for Chicago now?

DeVries says that a blending of funds, combined with compelling planning and strong political support, could do it. It includes some “value capture” from rising property values around the train stations, special fees such as toll lanes, a regional funding mechanism and some new taxes. All this would be needed to make up for dwindling federal support.

“The public is willing to support this, but not if all they see is one project at a time,” he says, bemoaning the piecemeal way that projects are planned nowadays and the lack of an overall vision. “At one time, Chicago was doing the best planning in the nation. We’ve got to get the people of Chicago excited for a new plan to invest in ourselves.”

Munson thinks there needs to be a change in regional governance. There is an advisory body called the Chicago Metropolitan Agency for Planning (CMAP). He would supplement CMAP with something he calls TRIB–Taxpayers Regional Investment Board—an elected board with a mandate to spend new tax dollars for infrastructure according to clear plans.

Currently, no high-level discussion is happening about how to fund what this city and region need for the new century. And with the state and city preoccupied with current financial woes, the outlook is not good.

DeVries maintains an optimistic outlook. “A lot of planning is doing things now, so that other things can be done later,” he says. For now, it seems, planning is all we can do.