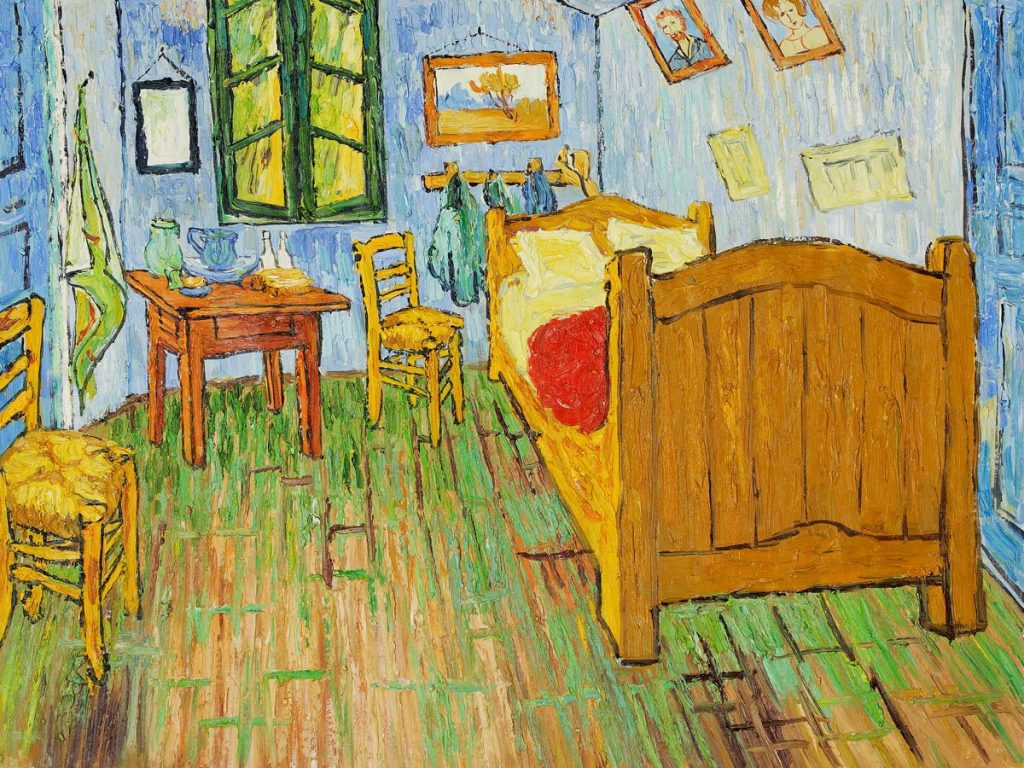 “Van Gogh’s Bedrooms,” running through May 10 at the Art Institute, explores the concept of home as refuge, sanctum, haven, via the brush of post-impressionist painter Vincent Van Gogh. Within this structure—the exhibition—are clues to understanding the architectural paintings of the artist so well-known for his natural landscapes. “Architectural” expresses not only its relation to the physical structures within these paintings, but the idea of something that has a unified overall design, form or structure. In practical architecture, every piece of a building is part and anchor of another, a chain of calculations composing a durable system. A painting, though, can disagree, conflicting in its different elements or realities and most of all explore ideas as a poet does: through representation rather than construction.

Within Van Gogh’s paintings of buildings and cities, the designed space seems to flow into, interact and form a part of the natural landscape. His perception of the materials with which vernacular structures were built is also found within his paintings of natural scenery. To Van Gogh’s eye, these spaces commingled, and the same brush strokes, materials and hues captured the essence of both.

Van Gogh was an itinerant traveler, flitting from city to city and often his first response to a new habitation was to find a vantage from his window and work out the landscape in painting. It was a way for Van Gogh to orient himself, to become closer to the environment by exploring the lines and shapes of his current location. The traces of the artist touch many places, having lived in thirty-seven residences across twenty-four cities through his lifetime. Yet “The Yellow House” (as Van Gogh referred to it) became the most iconic of his homes because of its impact on his psyche. It is the structure in which his famous bedroom was located, as well as his artistic headquarters—what he referred to as the “Studio of the South” after leaving Paris for Arles, France.

Van Gogh rented several rooms in the building, which shared many aspects of the Provençal-style farmhouse known as a mas. It was constructed of local stone, with a kitchen and atelier for his work on the ground floor, and rooms for lodging and storage on the level above. Van Gogh’s own bedroom feels sparse, even soberly meager. The window shutters pull inwards, as if asking to be opened to the outside world, but are closed. The exhibition recreates this space and I am struck by how small it feels in person, while the painting draws the viewer in and seems to expand by virtue of its perspective.

Van Gogh’s fascination with varying homes is rooted perhaps in his love of the idiosyncratic and complex craftsmanship of abandoned birds’ nests. Van Gogh collected them throughout his life, perched them within his studio and was even known to pay local children to hunt for them. His passion was also directed into his extensive collection of Japanese prints. The rigid, vanishing perspectives and geometric rooms and scenes created an idealized, even mythic space for Van Gogh. His concept of space was shaped by his use of a perspective frame, a literal framework of wood used to compare proportions of objects and distances to create an illusion of three-dimensionality.

In a letter to his brother Theo from August of 1882, Van Gogh praises the frame’s ability to break down a field of vision, that its view is “as through a window,” only one that defines the composition and proportion of its elements. While Van Gogh thoroughly practiced this drafting feature through many sketches, “The Yellow House,” and the “Bedroom in Arles,” captured what his eye and hand could not within the field of vision.

The effort put into making Van Gogh’s “Bedroom in Arles” come to life is reflective of a desire by museum audiences to have a closer, more poignant experience with art. The museum curates the space of the painting, adding dimensions to Van Gogh’s painted surface to offer a new kind of engagement in the recreated bedroom, both within the exhibition gallery and in a synonymous recreation as a publicly rentable Airbnb room. Similar efforts to make the museum experience more immersive are reflected in the museum use of Verus Art’s proprietary 3D scanning and printing technology which allows visitors to touch recreated paintings. The first of these was Van Gogh’s “Iris” in the National Gallery of Canada. Here, design offers the solution to limited engagement, even creating possibility for the visually impaired. These interventions question the true home of an artwork and even the space in which it is thought to be contained.

This exhibition uncovers a complex range of meanings for home and offers a personal experience of architecture previously represented only through painted likeness. For one so haunted by crises and mental illness, “Bedroom in Arles” becomes a representation of some of the best years of Van Gogh’s life. In his desire to depict sanctuary, he symbolizes both the carefully woven haven of bird’s nests and the mythic pastorales of his Japanese prints. The exploration of home triggers self-reflection, with questions of legacy and belonging. The Yellow House is now gone, damaged by bombing in WWII and later demolished. The legacy of the artist’s suite of Bedroom paintings, though, is something of the feeling and emotional space, of home marked by the colors and tempo of “utter repose” Van Gogh described in another letter to Theo from 1888. This calm, domestic space is how he wanted to appear to the outside world.

“Van Gogh’s Bedrooms” runs through May 10 at the Art Institute of Chicago.