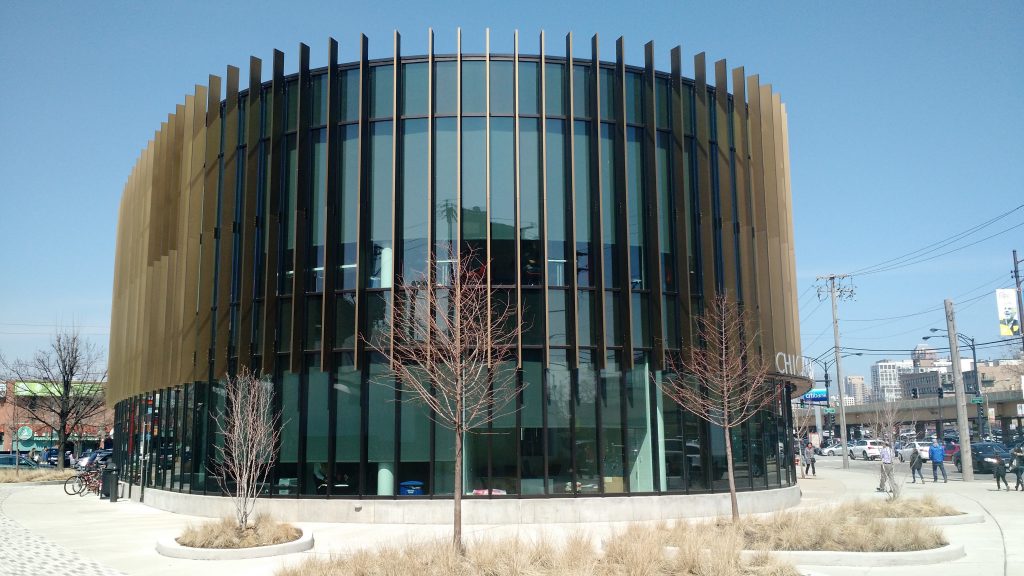 The new Chinatown Branch Library, a 16,000-square-foot building at the intersection of Archer and Wentworth, is the latest addition to the Chicago Public Library system. Designed in the Chicago office of Skidmore, Owings and Merrill (SOM), the building brings a softness to the muscular and performative design this historic Chicago firm is known for. Although SOM originated in Chicago and built much of the skyline, it has, in the last two decades, turned its attention to exporting design to Asia and the Middle East. This building is one of a new crop of projects that sees the firm redirect some of its considerable design talents to local projects.

The library’s plan reflects its triangular site with radiused corners giving it a smooth and pebble-like shape. Site Design Group worked on the landscape, echoing the building’s form and curvature in the plaza and plantings surrounding it to create a variety of eminently usable and welcoming exterior spaces. A glass facade set in black mullions wraps the entirety of the two-story volume with vertical louvers added in order to shade the upper portions of the facade from direct sunlight. Inside, the softened triangular plan is echoed in the building’s atrium which links the two levels of space, and around which the program unfurls in an expertly executed procession. An oculus at the top of the atrium ensures that this central space, and the community interaction and connection it engenders, remains the focus of the building. 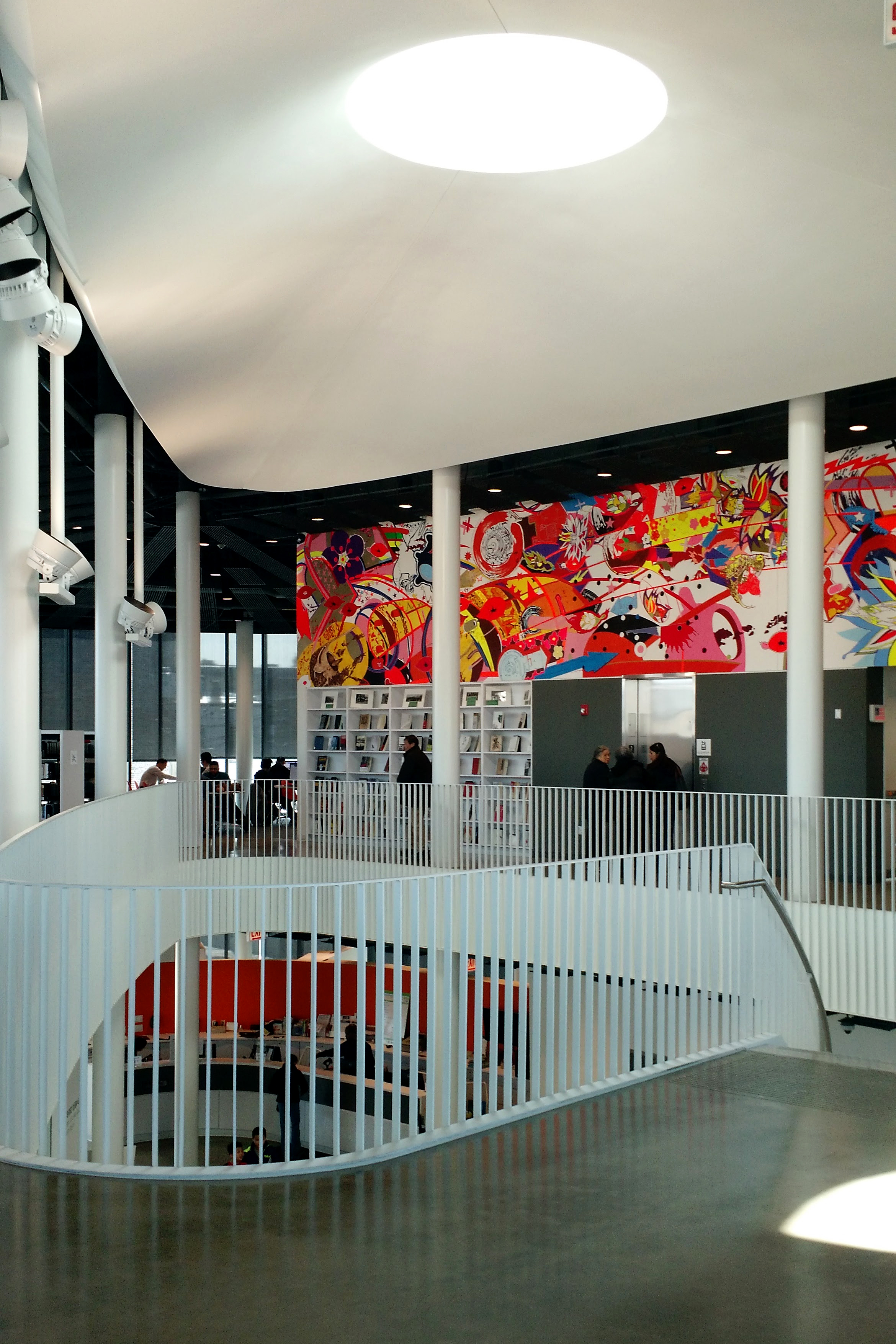 The oculus in the new Chinatown Branch Library

Unfortunately, the detailing and execution of this central element of the project is not deserving of the masterful design that generated it. With a construction budget of sixteen million dollars,* the project claims to have been only five percent more expensive than if it had followed the Chicago Public Building Commission’s Library Prototype—brick walls, rectangular volumes and utterly uninspiring spaces throughout. In either case—the prototype model or this bespoke design—that puts the cost of a new library project at over $1,000 per square foot, a king’s ransom to pay for poorly executed construction.

For comparison, the recently completed World Trade Center in New York, also by SOM, was $1,150 per square foot. It beggars belief that a project as complicated and conspicuous as the World Trade Center would be only marginally more expensive (per square foot) than a community library in Chicago. Civic buildings in nearly every major city in the United States invariably come in under this square-foot price, sometimes significantly, all while featuring a quality of craftsmanship and execution that sets celebrated pieces of architecture apart from lesser projects. From wavy steel balustrades to misaligned joints in the concrete and terrazzo floor, the library suffers from the same ambiguous yet utterly demoralizing entropy that has plagued the very being of Chicago. While these details may not be immediately apparent, they nonetheless filter into the subconscious experience of the spaces, undermining the otherwise successful experiential and visceral aspects of the building.

The project is doubly disappointing due to the city’s decision to use SOM in conjunction with an Architect of Record (Wight and Company) due to SOM’s lack of recent experience building in Chicago and at the relatively small scale of this project. This poorly considered decision (in comparison to using another local firm with equally solid design and delivery chops) adds another layer of disconnect between the design of this building and its execution in a construction industry and public project procurement program which already struggles with these issues. In every new public project, the city has an opportunity and a responsibility to incentivize innovative and effective project procurement strategies. Previous attempts to reign in construction cost, waste and corruption in public projects have added impenetrable layers of bureaucracy and red tape while increasing the overall cost of project delivery.

Instead, the city should embrace Integrated Project Delivery, true design-build models, pre-fabrication and implement new contracts and incentives that better serve the aims of public projects and civic spaces. In a stagnated and over-constrained construction industry, the city has considerable power in how projects are designed and built. Leveraging this position would not only improve public projects, but could serve as a model for how to improve quality and decrease cost throughout the construction industry, including private projects.

To improve the built environment, the city should pursue these innovative means and methods (by now widely proven in more forward-thinking municipalities) and encourage—or require—architects, engineers and the unions that control building trades in Chicago to come to the table. The process of changing government policy is long, messy and fraught (as proven by the city’s failed attempt to normalize the Chicago Building Code with international standards), but these hidden constraints and forces shape the built environment in deep and permanent ways. The aesthetic and functional quality of the buildings in Chicago and spatial and urban inequality in marginalized neighborhoods are not random occurrences, but stem from real and verifiable policies. If not properly addressed, this creeping senescence will undermine the city’s finances, culture and vitality, and the very foundation of its society—the buildings and environments we all inhabit.

*The cost of the library has been reported as both $19.1 million (by Chicago Public Library’s official press release) and $16 million (by the City of Chicago website). The project was financed with a $15.6 million TIF. Publicly-available contract and payment documents from The Chicago Public Building Commission are incomplete as of this writing.