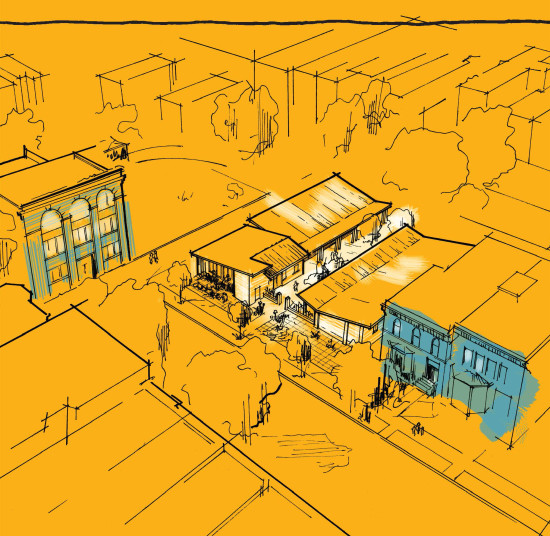 The winning tiny house design from Terry Howell and Lon Stousland of Antunovich Associates and Marty Sandberg of Via Chicago Architects.

In an age when even an adjunct professor could make less than an employee at McDonald’s, and in a culture where eviction is systemically profit-driven, new forms of economical living appear more attractive and necessary all the time. As such, tiny house projects have been springing up around the country with obvious appeal.

Designed as rudimentary shelters, often at costs ranging from a few thousand to a few tens of thousands, they have been touted as a viable solution to ending the problem of homelessness. Of course, some pushback has occurred, like the unconscionable eviction of those living in immiseration from their tiny houses and back onto the streets of Los Angeles by Mayor Eric Garcetti. Similar efforts to displace the less fortunate in Chicago are taking place at the “Tent City” viaduct at Wilson Avenue under the instruction of pro-development Alderman James Cappleman, as diligently reported by social-service organization Uptown Uprising. Their pressure, and that of others, seems to have garnered results: in recent months, Mayor Emanuel has appointed a task force and Cappleman has announced plans to relocate the tent citizens into housing (though as yet with few specifics).

The recent shift to a housing-first model is an important and laudable one. Both would do well to have a close look into how the specific problem of youth homelessness has been addressed in a “tiny houses” design competition, organized by a consortium comprised of AIA Chicago, AIA Chicago Foundation, Landon Bone Baker Architects, Windy City Times, Pride Action Tank and the Alphawood Foundation. With more than 200 design submissions from architects around the nation and beyond, the winning group was the trio of Terry Howell and Lon Stousland of Antunovich Associates and Marty Sandberg, of Via Chicago Architects. Their design won them a five-thousand dollar award and the chance to build a prototype of their tiny house, which consortium plans suggest will be placed in Bronzeville under the operation of Pride Action Tank. The winning design was showcased at the Pride Action Tank Tiny Homes Summit recently at the University of Illinois at Chicago (UIC).

While perhaps a workable stopgap solution, tiny houses may not provide the necessary long-term housing needs sought by those informed advocates in the community. “I think the city should allocate land for citizen-supplied tiny houses and then the city should do everything they can to replace the tiny houses with standard housing,” says Yehuda Rothschild of Uptown Uprising, a staunch advocate and frontline fighter in the pushback against the persecution of Tent City residents. “Tents are not humane in this climate, though clearly an improvement over nothing. Tiny houses should be the low bar an advanced society provides, in my opinion.” (Michael Workman)