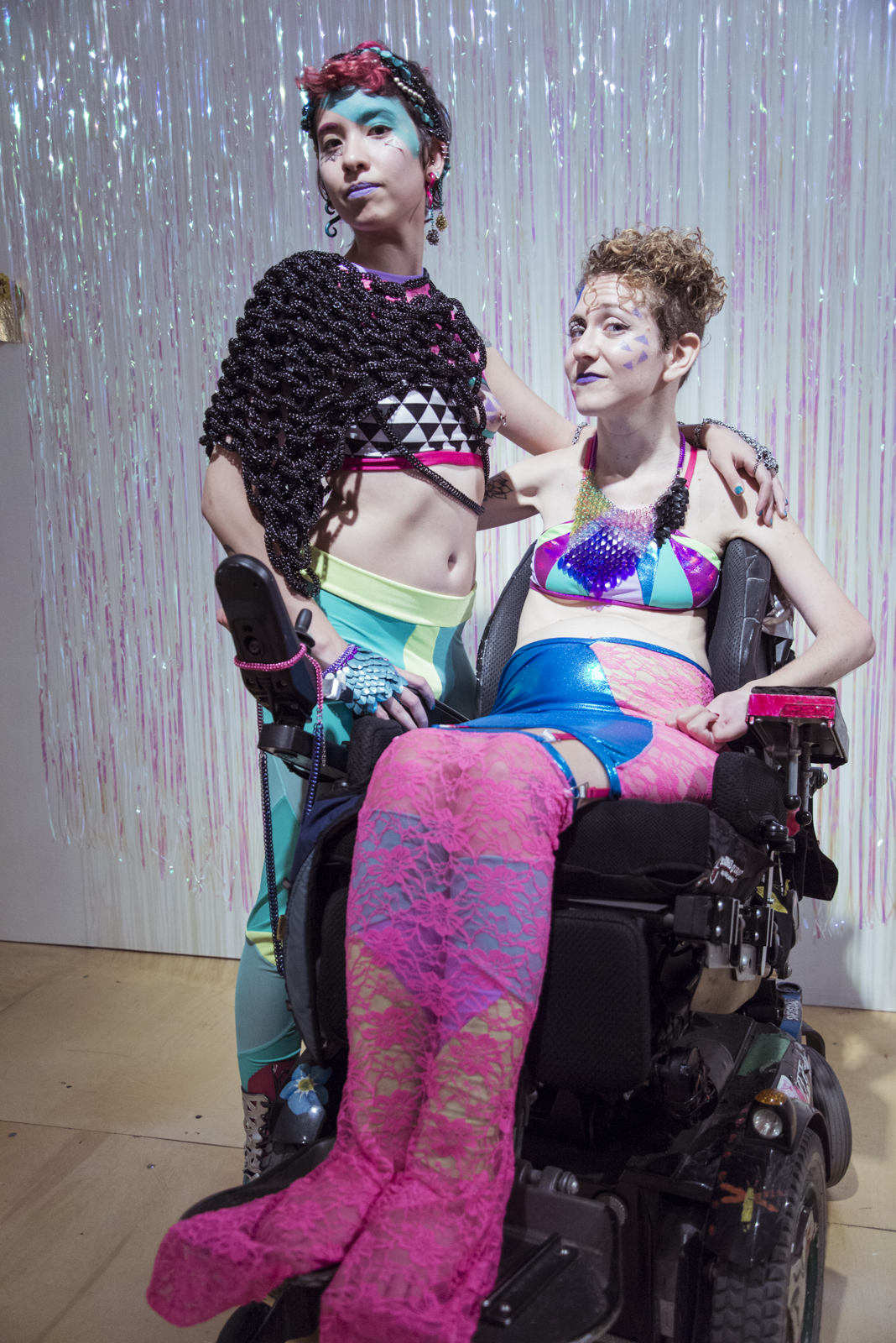 Rebirth Garments is a fashion line dedicated to creating “wearables and accessories for people on the full spectrum of gender, size and ability.” Recently, Maker Beat sat down with garment maker Sky Cubacub for a chat.

How did you originally start making garments?
I’ve been making garments from early in high school and making chainmaille since I was thirteen. My recent work started out with the chainmaille after I started making sculptural garments that were built for myself. I made about one garment per semester in high school. Then, I had a senior practice where I made a collection of it, but also of found objects, embroidered and hand cut paper.

How did design school react to your machinations?
I got a full ride through that [high school] collection to the [School of the] Art Institute, and I had originally intended on going for fashion but they weren’t really interested in challenging the fashion industry at all and were more so into assimilating and staying with how it is. I got critiqued a lot for making things for people who were “too fat,” even though a size four was too fat for them.

So this statement approach, it was always an artistic, design-oriented approach? And could you discuss the materials and your use of patterns?
Yes. I consider myself an artist and a garment maker. I don’t really talk about myself as a fashion designer, since the fashion industry does have all these connotations that I don’t really want to align myself with. I started out my garment line researching materials that would be good in making undergarments for transgender folks. I discovered this material Powernet that’s good for compression but it’s also meshy, so it’s breathable. I had been making Spandex unitards since I was in high school because my teachers told me I had to have something under my chainmaille garments since they were too “naked.” At first I used leotards, but they only come in black, white and a nude color, like a beige, so that made me upset and I got into making unitards out of Spandex because I hate sewing woven fabrics, they’re so much less forgiving. Spandex can suit a lot more body types and I like using it for folks with disabilities too, who might not have as much range of motion so it can really, really stretch over them. It’s also easy to clean—cold water wash—it doesn’t stain as easily, things like that.

What drew you to making garments for transgender and differently abled people?
Right, well, I’m genderqueer, and I’m a person who has panic attacks. I have a panic disorder and anxiety and things like that and I’d originally thought I was going to do two separate lines: one as undergarments for trans folks and then another as clothing for people with disabilities, but the more I was working on my designs it just made sense to me that they’d go together. Then I got really interested in disability studies literature—Rosemary Garland Thomson is one of my favorites; she wrote a book called “Staring: How We Look”—and I decided to write a manifesto that is on my website. I also read “Feminist, Queer, Crip”—so yeah, there’s a lot of overlap between disability studies and queer studies and I just liked the idea of everybody usually marginalized coming together and having a radical sensibility in order to lift us all up. People have asked me why I would put trans people in the same space with people with disabilities since trans folks have fought so hard not to get put in the DSM as a disability but I argue that I want everyone to come together to fight oppression rather than trying to separate ourselves.

Fight the systemic bigotry of it, of the body and the shaming endemic to it.
Yes. So, I also focus on people of color and fat folks, plus-size folks, just everyone that the fashion industry shuns is also what society shuns. Fashion is very tied into how people are treated and the fact that there’s hardly anything for these folks, it’s ridiculous and shows what our society values. So my manifesto talks about why I use holographic and clear fabrics, because it’s trying to create this radical sensibility; most of the things for people with disabilities look like they’re hospital scrubs or just bags you put over yourselves. They’re so unflattering and people can wear that, it’s fine. My line isn’t about, “you have to wear this.” It’s about having the choice to wear something that’s cute and form-fitting as opposed to only being able to wear bags. So I talk about pattern and “dazzle camouflage.” It’s so dazzling that you have to look at it, but it hurts your eyes at the same time. That’s why I use bright colors and I talk about why I use “queer fabrics” as a kind of goofy pataphysical saying, “we’re queer and confident and we don’t have to hide.”