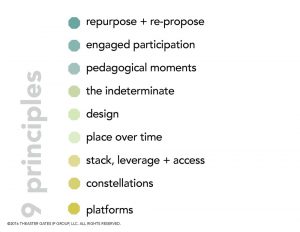 “A city is not as we perceive it to be by vision alone, but by insight, memory, movement, emotion and language. A city is also what we call it and becomes as we describe it.” —Grady Clay, “Close-Up: How to Read the American City”

The act of city-making is about upending ingrained perceptions of place. Although city-dwellers create and maintain steadfast associations about neighborhoods and places, the fact is is that cities are never complete, neighborhoods never fixed in stone. Codified ideas and perceptions are often, simply, in need of a little re-contextualizing.

Chicago’s Theaster Gates has created a cottage industry out of such, taking discarded assets of the South Side and giving them new meaning. He’s done this not by invigorating his projects with new material life (although new material life is certainly given) but by bringing to the fore the inherent value of specific sites that have lost their perceived wealth.

To a real estate developer solely focused on the bottom line, it’s an inside-out way of thinking. To a developer thinking about the long term viability of a place in the city, it’s a paradigm. What’s needed to merge the two is a common language to, as Clay would say, “read the city.”

It’s in that spirit that Gates’ Place Lab,  a partnership between the University of Chicago’s Arts + Public Life  and the Harris School of Public Policy, will convene its Ethical Redevelopment series, a year-long forum of salons that will feature “urban practitioners who believe in spatial equity for cities” from around the country to “make the case for mindful city-building.” The salons will work across a set of nine principles for ethical redevelopment. Bookending the salons will be public events that invite the broader populace in to engage with, and add to, the larger conversation.

Something in the urban fabric gets lost in translation as time slips by. The Ethical Redevelopment salons seem intent on rediscovering the shared language of value that undergirds all urban places.

The Ethical Redevelopment series kicks off with a “Public Convening” on June 22, 2pm, at the University of Chicago Logan Center for the Arts.