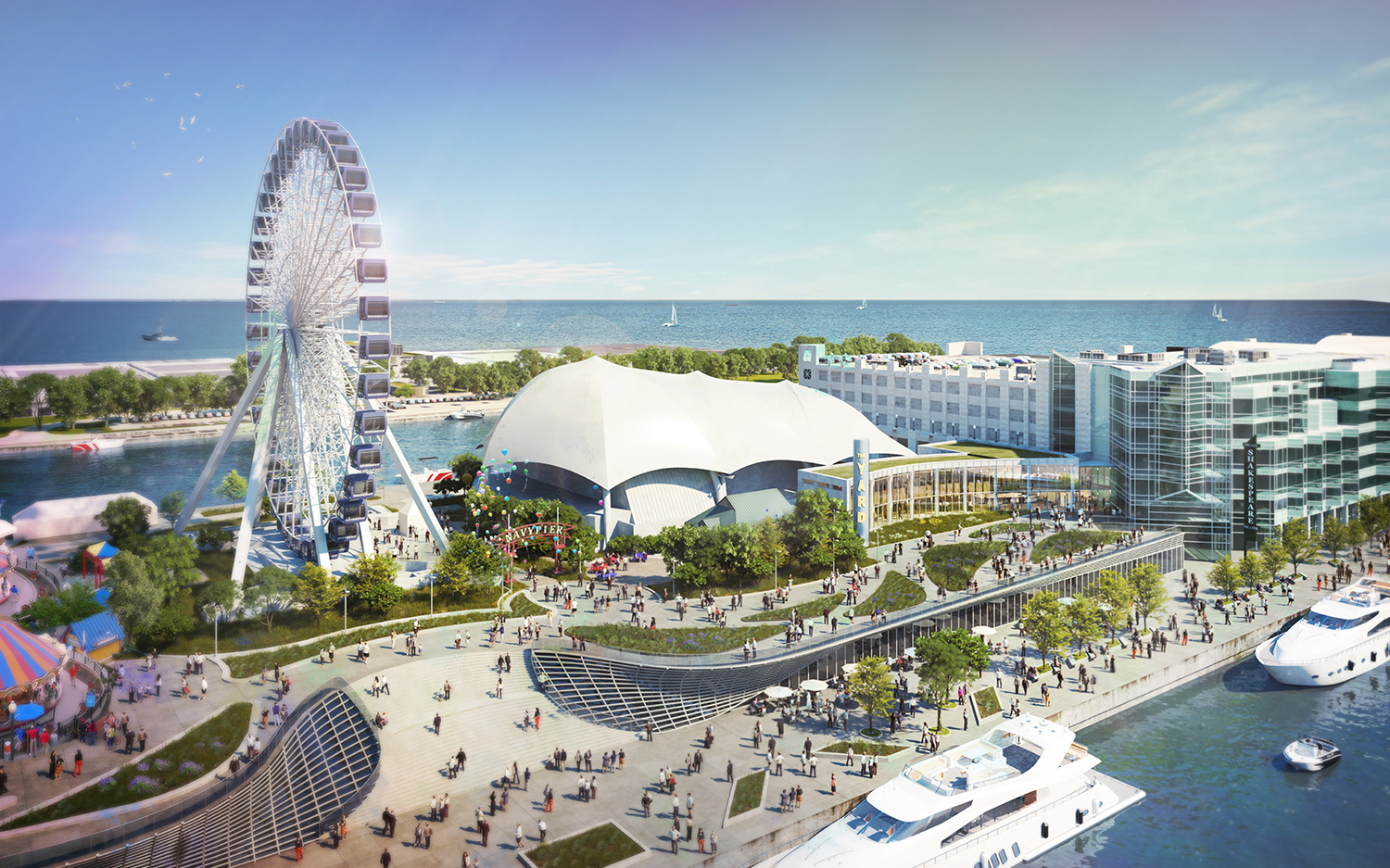 Chicago Shakespeare Theater (CST) is expanding on Navy Pier, with a new facility that promises to be a major addition to the city’s cultural landscape. A little paradoxically, it will have little to no impact on the actual skyline or streetscape, because its most important elements will be contained within a largely existing envelope.

The Yard, named after the portion of the original Globe Theatre in London where the Groundlings would stand to watch performances, will be located under the familiar tent-like canopy that has covered the outdoor venue known as Skyline Stage, within a permanent, enclosed structure. The space will be connected to the existing theater by a two story glass lobby running parallel to the Pier and will house a third performance space for the company.

What users will find inside its all-but-invisible concrete shell represents impressive innovations, both in the arena of building technology and design and also in the sphere of cultural land use.

CST’s executive director Criss Henderson says that The Yard has been in the development stages for at least a decade, as the theater explored expansion opportunities, both on and away from the pier, to accommodate its programming, which long ago diversified well beyond its core offerings of works by the Bard. It wasn’t until 2013 though, when the principals of charcoalblue, a UK-based theater and acoustics consultancy, convinced CST to stop thinking in terms of large-scale fixed venues and look instead at European theater companies who were investigating more flexible, cost-conscious ways to expand.

The team from charcoalblue devised a solution that called for a structure adjacent to the existing theater that would contain modular towers with multiple levels of seating that could be arranged to create dozens of possible stage and audience configurations. The facility would incorporate the existing “backstage” elements of Skyline Stage.

To execute its idea in real terms, the firm brought in Chicago architects Adrian Smith + Gordon Gill, a firm mostly known for its work designing super-tall towers in Asia and the Middle East. Here, lead designer Gordon Gill says the project was almost the inversion of super-tall—“like building a ship in a bottle,” he offers. The decision to retain the tent structure as a kind of familiar branding element at the Pier requires all of the elements for the shell and the towers to be fabricated elsewhere and assembled on the site. Gill says you won’t see a single construction crane in the process.

The project takes a very novel approach to theatrical real estate, reflecting a shift away from fixed-seating venues to more flexible, multi-use spaces. “The Skyline Stage was the most underused part of the pier in recent years,” says Henderson. “What could we do to reimagine the tent and the space beneath it?”

This solution, he says, “is an artistic platform that lets us be super-responsive to artists and excite audiences.” It also greatly enhances the ways the company can use the space, offering a venue for anywhere from 150 to 850 seats, and greatly increases the theater’s financial efficacy. (Of the project’s thirty-five-million-dollar cost, the Pier authority is supplying fifteen million, and CST is raising the rest.)

The project is similarly innovative technically. It’s an extremely complicated project, even by the standards of densely electrified and power-sourced performance venues. Each of the moveable towers has its own mechanical systems and they in turn have to link with bridges that connect to the adjacent lobby space.“Threading it all together makes it into a very surgical project,” says Gill, who analogizes the process to creating a series of docking stations.

Gill acknowledges that most of the users will be oblivious to all of the design dynamics, and will only be conscious of the theatrical experiences they’ll enjoy, which is fine with him. The project after all is not about the systems that drive the performance space, but about the theater experience itself. “The biggest challenge is making the design invisible,” Gill says.

There’s a temptation to call this facility “state of the art” but Henderson suggests instead that it’s more “state of the imagination.” Says Henderson, “You can have a ‘state of the art’ theater, but it often comes at huge cost and doesn’t in the end serve the artists or the audience.”