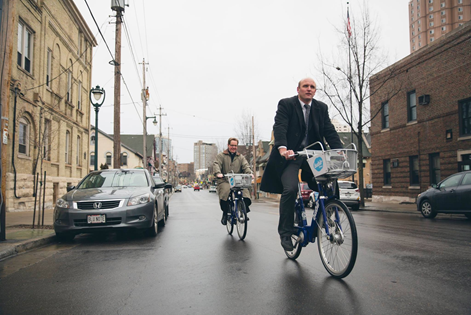 When it comes to neighborhood design, it is hard to deny the power of the alderman. In both Chicago and Milwaukee, these local elected officials have a lot of influence over what gets built and how. To put it kindly, principles of good urban design aren’t always their top priority.

Milwaukee alderman Nik Kovac believes that, when it comes to neighborhood development, “design really matters.” He grew up on Milwaukee’s East Side, studied mathematics at Harvard and spent his early and mid­-twenties in New York City as a community journalist. He represents the area of Milwaukee that has the highest average per unit assessment and highest educational attainment in the city. He told me that Mayor Tom Barrett likes to joke that he didn’t know that everyone who lives in Kovac’s district is an architect until he visited. The School of Architecture and Urban Planning at the University of Wisconsin ­ Milwaukee is also in his ward.

You could say he’s learned a lot by listening to his constituents. I wanted Kovac’s opinions on how Chicagoans could best experience Milwaukee’s built environment.

On what makes Milwaukee unique
I think what most people from other cities will notice about Milwaukee, no matter where they’re from, is the relatively little damage we’ve done to our historic architecture. When they tour the lakefront, the East Side or the North Point neighborhood, there is an amazing collection of late-nineteenth-and-early-twentieth-century craftsmanship and architect-designed buildings. All of these magnificent buildings are next to the most scenic bluff in the world. We were lucky to be not as economically successful during the really bad periods of urban renewal like the late sixties, seventies and eighties when other cities were just demoing everything. We did our share of it but we did less than other cities.

On Milwaukee’s waterfront access
Another huge asset we have in Milwaukee is that you have three different ways to get downtown from the water. We’ve got three rivers that meet:­ the Kinnickinnic, the Menomonee and the Milwaukee. Pittsburgh claims to have three rivers because they can’t count. They’ve only got two and a garden variety confluence. They don’t understand that the Allegheny is really just the upper Ohio. Chicago has only got the one but it flows the wrong way so Pittsburgh is less backwards than Chicago when it comes to their rivers.

The Milwaukee River is amazing! I don’t think there is another major American city that has a river wilderness in the middle of the city that you can feel like you can get lost in. I think people from Chicago will be stunned when they see that.

On parks and public spaces
Lake Park, designed by Frederick Law Olmsted, is the best park in the world. Olmsted made some mistakes in Central Park and fixed about half of them in Prospect Park in Brooklyn. By the time Olmsted and his kids really knew what they were doing, they built Lake Park. So it is a park without mistakes, unlike most of the parks in Chicago and New York.

I think we’ve protected our lakefront better than Chicago has. I mean, yours is okay but the road that runs along it is really too wide so you’ve ruined the connection. We do have a road but it is only two lanes in each direction rather than four. We’ve got better bridges and pedestrian connections to our city and our lakefront, both downtown and north of downtown.

On exploring the East Village… of Milwaukee!
Spend some time in the East Village (Lower East Side) and on Brady Street. Our most famous bar is Wolski’s and it is good but there are several other good bars even on that block. Wolski’s is on a street called Pulaski Street which is a break from the street grid. It follows the path of an old creek that the Polish immigrants put their houses on and filled in before the city could stop them. The city was busy trying to extend its grid to the north and the immigrants beat us to it. It is easy to get lost around there and it is very confusing but, in many ways, it is the most charming part of Milwaukee. It is like Bleecker Street in New York’s West Village.

On Chambers Street you’ve got a coffee shop, a hardware store, a bar, a restaurant and an art gallery all within three blocks. Dino’s is an Italian restaurant that has been there for two generations. You also have Scardina Specialities, an Italian butcher shop and deli where you can buy fresh sausage and they hand-fill the cannolis as you order them. Next to Scardina was a massage school that is about to become an art gallery. So on one neighborhood side street you’ve got a great third-generation Italian restaurant, an Italian butcher shop, an art gallery and Circle-A, the Anarchist bar. Interestingly, the Anarchist bar does have all their licensing in order. It is against their principles, but they’ve done it. At the end of the block, there is a Colectivo Coffee and you’ve got a lumber yard. It harkens back to the old days of Milwaukee.
Alderman Kovac’s pride in his hometown is evident but he has some love for Chicago, too. “Overall, I am happy Chicago is there. I mean, the Packers need someone to beat,” he says.

I lived in Milwaukee for about a month many years ago. Unfortunately not long enough to really get a good sense of the city. I pretty much just went back and forth from somewhere on the western side to the port to unload boats. So thanks for the travelogue.

I agree about LSD ruining the lake front parks. I am also excited to hear about your plans for a BRT connection out west.

I-794 and Lincoln Dr don’t count as separating people from the Lakefront but LSD does?