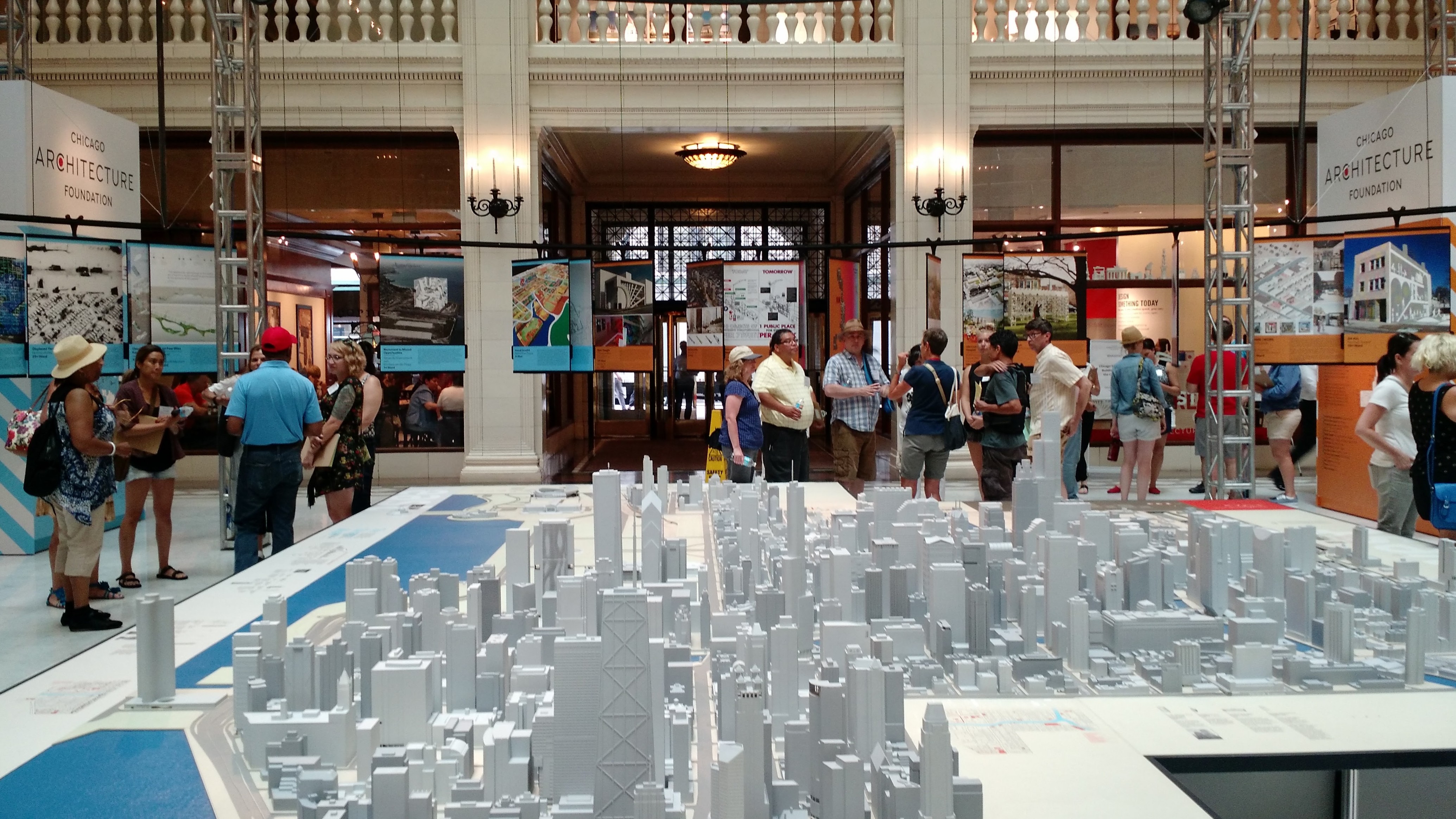 “50 Designers, 50 Ideas, 50 Wards” is the Chicago Architecture Foundation’s ambitious exhibition organized to mark its fiftieth anniversary. Martin Felsen and Sarah Dunn of UrbanLab curated the effort with Chicago Architecture Foundation’s Lynn Osmond, Michael Wood and Jennifer Masengarb, and foundation advisor Reed Kroloff. The theme of the exhibition asks fifty designers to, “create[s] transformative proposals aimed at improving the quality of life for residents in each of Chicago’s fifty wards.”

The exhibition at the CAF is an array of fifty two-sided presentation boards on a circular sliding track beneath the center of the Railway Exchange Building’s always-delightful atrium. Four walls of additional exhibition materials provide some categorization for the diverse proposals. The show is visually arresting with rigorously applied graphics and a cohesive theme that make for an engaging experience, although the limited exhibition space for each project (as is necessary for such a wide-ranging public exhibition) belies the complex nature of many of the proposals while concealing a lack of depth in others. CAF has also made the exhibition available in a digital-format accessible via the CAF website, extending the audience for these proposals, many of which deal in issues applicable to a wide range of cities across the globe.

A stated inspiration for the exhibition, the Burnham Plan, was unique in that it was a political plan as much as a spatial plan—politics as territory. There is certainly compelling work here that engages with policy in a meaningful and beneficial way. A common shortfall in the unbuilt architectural (as opposed to urban) scale proposals is the lack of a client for the project. Whereas the generally excellent urban proposals dealing in policy, data, housing and infrastructure can easily assume the client to be the City of Chicago, a government agency, nonprofit or an end-user, the architectural proposals generally lack such grounding. This leads to a menagerie of aesthetic and formal expression cloaked in social rhetoric while eschewing the messy process of engaging experts, politicians, bureaucrats and the community. Here, transformed, is the traditional social strain of modernism updated with alluring graphics, new context and physically smaller projects, yet still hawking the same ideas of social change through singular architectural vision that gave us “solutions” like Cabrini-Green and Pruitt-Igoe. This is, of course, reductive. The complexities of contemporary architectural practice, current norms in the academy, and a host of other factors contribute to this condition. And yet, the criticism stands.

The proposed solutions are intended to improve the lives of citizens through design, yet many of the projects fail to ask those same citizens what they want or need, and if they will help in turn. This failure to engage also leaves the public without motivation to enfranchise themselves in the political process to achieve such ends while obfuscating the current difficulty of implementing transformative design. These depths are hinted at in the outrageously gerrymandered ward boundaries that reveal themselves in each project’s graphic map of Chicago wards. The proposals included that do manage to ask, “What if?” with sincerity assume some transgressions of current building and zoning codes or massive (necessary) infrastructural improvements, no doubt at great expense. At the very least, these projects propose efficiencies and aesthetics that run counter to the institutional momentum within the city’s many departments, a daunting prospect in itself. None of this is necessarily inappropriate for such an exhibition, but it does ignore the question of where much of the aesthetic and spatial expression in our built environment comes from, and how we might change it.

One only need look to the recent dust-up between the Chicago Architecture Biennial and Fifth Ward Alderman Leslie Hairston on the topic of the lakefront kiosk, “Summer Vault,” to understand the difficulty in advancing these seemingly seditious acts of spatial infiltration in Chicago without the support of the community and the politicians who run local government. With the upcoming 2017 Chicago Architecture Biennial rumored to be focused on Chicago-area architects and buildings, I can’t help but wonder whether it will be another update of heroic paper architecture or a meaningful investigation into the collaborative and fraught practice of architecture and planning in a mature and globalized metropolis. As “50/50/50” demonstrates, Chicago’s practitioners cover the spectrum. While both camps are necessary for a healthy and diverse architectural community, focusing too heavily on speculative proposals can distort the reality of architectural practice in a way that overlooks the subtleties of realized projects. The most inspiring aspect of Burnham’s visionary plan is that it was, and continues to be, implemented at all. Perhaps it is time those within the design profession give as much consideration to impact as intention, as the rest of the public is wont to do.