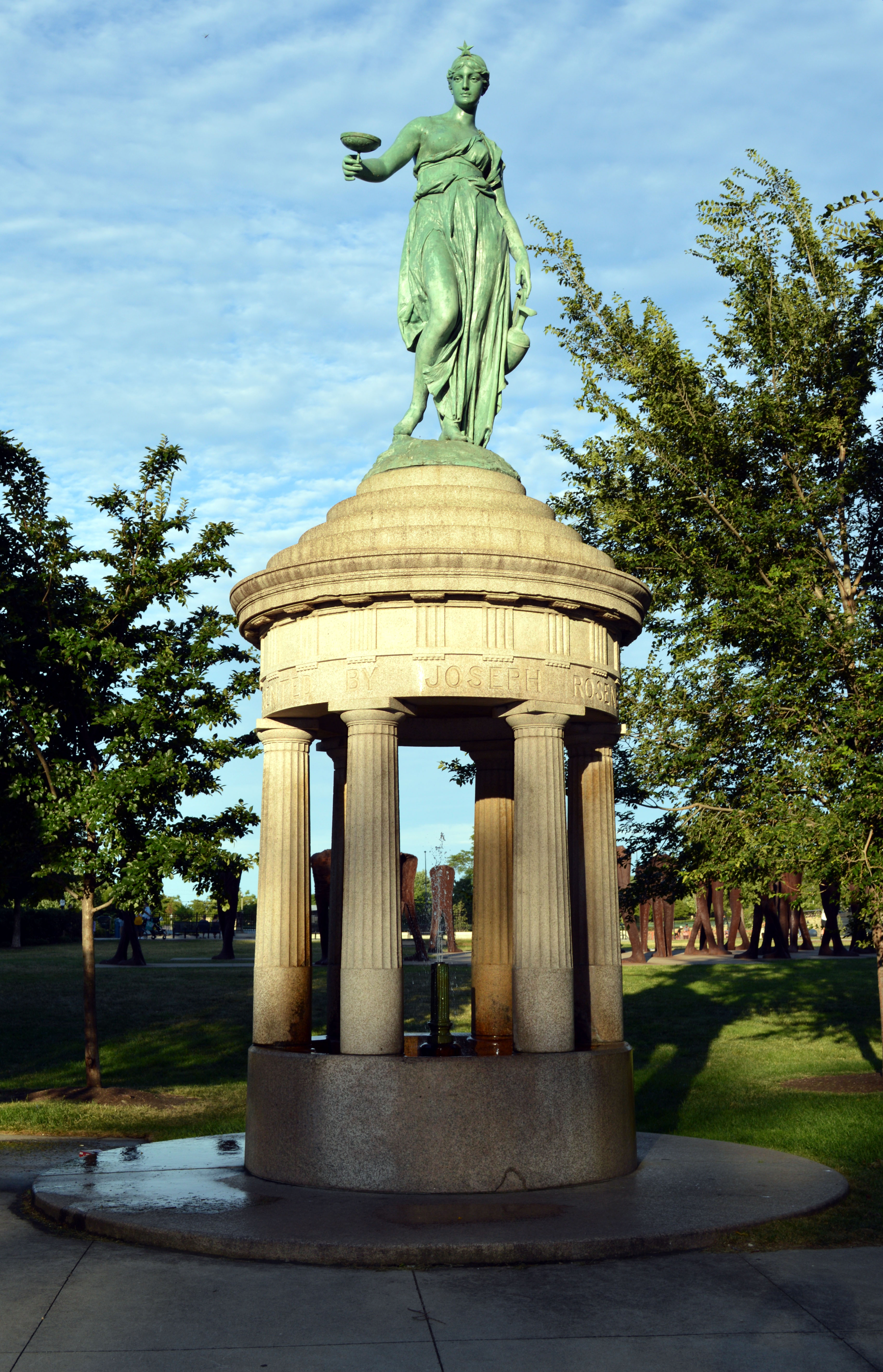 You are walking through the park on a warm day when you hear the soothing trickle of water and feel a cool mist in the air. Then you look up and see a statue and realize that this bronze fountain is also an inspiring work of art which beautifies our open spaces. But what you may not know is that a portion of Chicago’s fountains are survivors from an era in the late nineteenth century when there were no refrigerated beverages, and much of the tap water contained diseases like cholera. The safest things to drink were beer, wine, whiskey and other fermented concoctions, and many of Chicago’s men spent much of their working day “buzzed.” Productivity was lowered. Saloons were full. Even horses and dogs could not get water. The answer: keep them sober by building public water fountains on Chicago’s streets.

Three of these fountains still exist. The best known may be the “Fountain Girl.” Located in Lincoln Park near North Avenue and Lake Shore Drive, the statue bears a striking resemblance to Savannah, Georgia’s “Bird Girl,” the Sylvia Shaw Judson sculpture made famous by “Midnight in the Garden of Good and Evil.” The statue was erected by the Woman’s Christian Temperance Union (WCTU). Originally called “The Little Cold Water Girl,” it was placed at the 1893 World’s Fair primarily to dissuade men from propagating the numerous beer tents that mushroomed along the Midway.

Although the World’s Fair was a marvel of technology and culture, the city around it was teeming with corruption and alcoholism. Groups like the Anti-Saloon League, The Independent Order of Rechabites, and the Sons of Temperance were formed, and the WCTU made their national headquarters at LaSalle and Monroe Streets. Members of the group traveled throughout the city “converting” drunks, and a major portion of the $3,000 for the statue’s funding came from abstinence pledges.

When the fair shut down, the fountain was transferred to the WCTU headquarters downtown before being moved to Lincoln Park in 1921. After being moved east of the LaSalle Street underpass near North Avenue in 1940, the statue was stolen in 1958. The four-and-a-half foot figure was recast, and rededicated just east of the Chicago History Museum in 2013.

Another surviving fountain is the Drake Fountain. Commissioned by famous hotelier John Drake, it was also inspired by the 1893 World’s Fair. Unlike the “Fountain Girl,” the Drake Fountain was built in the Gothic Revival style. It is comprised of a nine foot statue which stands in front of a massive, quatrefoil base, from which spring four flying buttresses. The top of the statue looks like a Gothic church, with four smaller niches topped by a single pinnacle. At its dedication, it had four separate fountains, the lower ones for horses and dogs, which were cooled by as much as two tons of ice. It was placed on West Washington Street, between the County Building and City Hall. Although it was built in part to dissuade alcohol consumption, in true Chicago tradition, the fountain area became a den of squalor. Perhaps using the cold water to quench their thirst following earlier periods of alcohol use, the Chicago Tribune reported that the area was filled with men lounging amongst piles of old newspapers, rags and manure. The fountain was transferred to LaSalle Street in 1906. In 1909, it was moved to the far Southeast Side, at 92nd, Commercial and Exchange Streets. Today, it serves as a dry plaza, tucked away in a seldom traveled part of the city.

The final surviving public fountain from this era is the Rosenberg Fountain. As described by writer Leslie Coburn in Chicago History magazine, it was also built and erected around the time of the Columbian Exposition. The fountain was financed by Joseph Rosenberg, a former newspaper delivery person who became rich but remembered his thirsty childhood. Located in Grant Park near his former home at Michigan and 11th Street, the original statue was a nude depiction of Hebe, the voluptuous goddess of youth and cup bearer to the gods. Although this fountain was not built to combat alcoholism per se, temperance and religious groups protested the original design on moral grounds. An eleven foot high figure which still depicts one exposed breast and nipple was created by German artist Franz Machtl. The statue sits atop a base of four Romanesque pillars and a dome designed by Chicago architects Bauer and Hill. The fountain is no longer used for drinking, but still sends a stream of water skyward, where its beads rest in the air and fall into a granite basin below, relaxing and cooling passersby more than a century after its dedication.