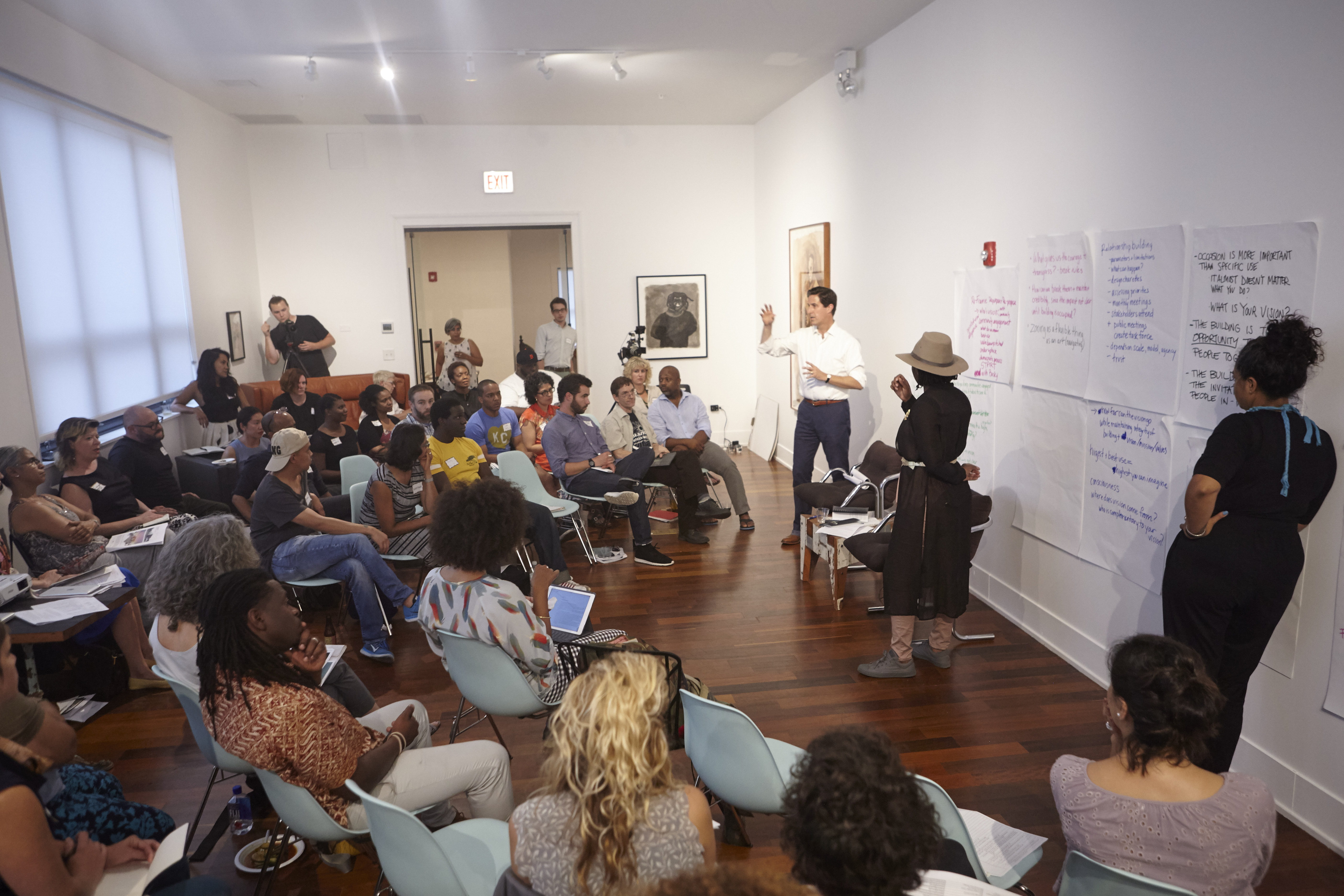 On July 28, Place Lab, an urban planning and arts-based revitalization enterprise formed through a partnership between the University of Chicago’s Arts + Public Life and Harris School of Public Policy, invited provocateurs of city shaping and civic-minded intervention from across the nation to exchange and deliberate “the process and values of mindful city building.”

The discussion was the first of nine planned “salon sessions” tackling “Principles of Ethical Redevelopment.” The salons will unfold over the next year at the Stony Island Arts Bank in the Greater Grand Crossing neighborhood.

The topic of this first salon was “Repurpose and Re-propose.” Thirty-seven practitioners came together to rank the nine principles of ethical redevelopment that they most ardently wanted to participate in discussions about. According to Ronia Holmes, assistant director of communications at Arts + Public Life, the Place Lab team was both surprised and enthused by the feedback collected. Salon members opted to participate in discussions focused on principles that they most needed to refine for the sake of enhancing their work—not topics that Place Lab already considered the participants to be well versed in.

Like every good host has been taught, Place Lab gave a tour of their “home” to the salon members and made sure to feed them a home-cooked meal. The salon began with informal introductions in Garfield Park at Inspiration Kitchens and was followed by a tour of select Rebuild Foundation projects. Among those was Rebuild’s latest acquisition, the St. Laurence elementary school building located on the corner of 72nd Street and Dorchester Avenue. The four story brick building, slated to become home to The Art School, a place to “encourage new pathways in the areas of art, architecture, design, fashion and fabrication,” is twice the size of the Arts Bank in terms of square footage. 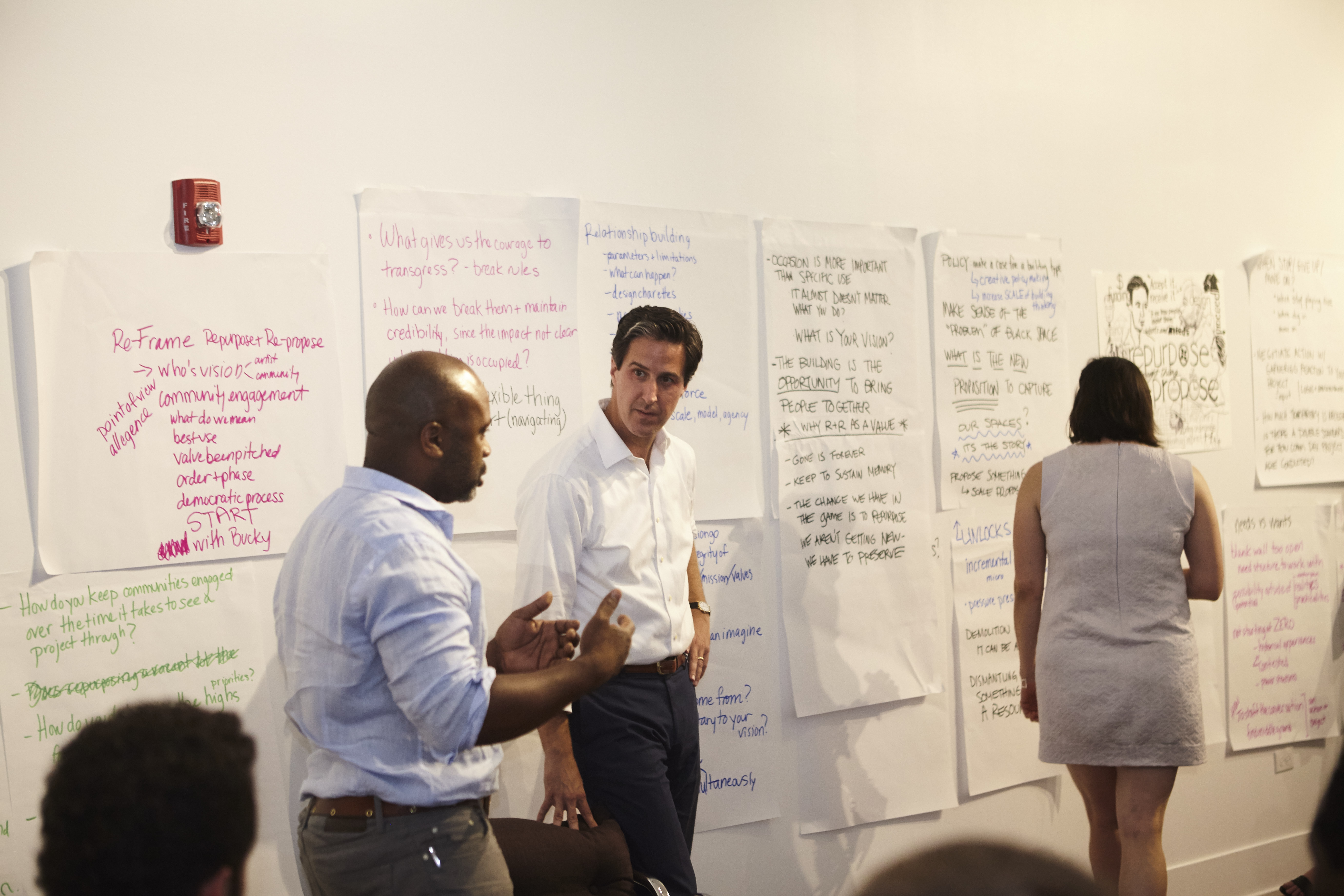 The salon members carpooled to the Stony Island Arts Bank to begin the formal discussions. It turned out to be a perfect introduction to the Arts Bank. As salon members were introduced to “Ever Young,” an exhibition of work by Ghanaian photographer James Barnor, neighbors trickled in to catch a set from musician-in-residence Mikel Patrick Avery. Upstairs, Place Lab’s Mejay Gula addressed context in the form of a slide presentation of Lee Bey’s photographs of Dorchester Avenue. This was followed by presentations from people of all backgrounds, pedagogical and otherwise: Rebecca ‘Bucky’ Willis of Detroit-based Bleeding Heart Design, UIC’s Dan Peterman and Place Lab’s own Nootan Bharani. Artist in-residence Arthur Wright sketched the salon faces and themes while Steve Edwards, executive director of the University of Chicago’s Institute of Politics, graciously guided the salon conversation into the evening. Like a town hall meeting where everyone in the community knows each other’s family history and shares the same desires for their town, the salon conversation was open, good-humored, and intentional.

For the salon members to achieve this sort of authentic communication, despite being from different states, having disparate projects and independent goals, they had to share something unseen. They had to speak the same language, and it was clear at this first salon that they did. Members discussed the efficacy of their efforts in their own hometowns, navigating legal and governmental structures, ways to pointedly engage communities, and pondered the possibility of scaling their visions beyond anything previously imagined. Questions asked of each other were offered up like confessions. In lieu of Hail Marys, these questions were met with mutual understanding, additional degrees of analysis and provocation for how they could all return to their cities and do their work better. 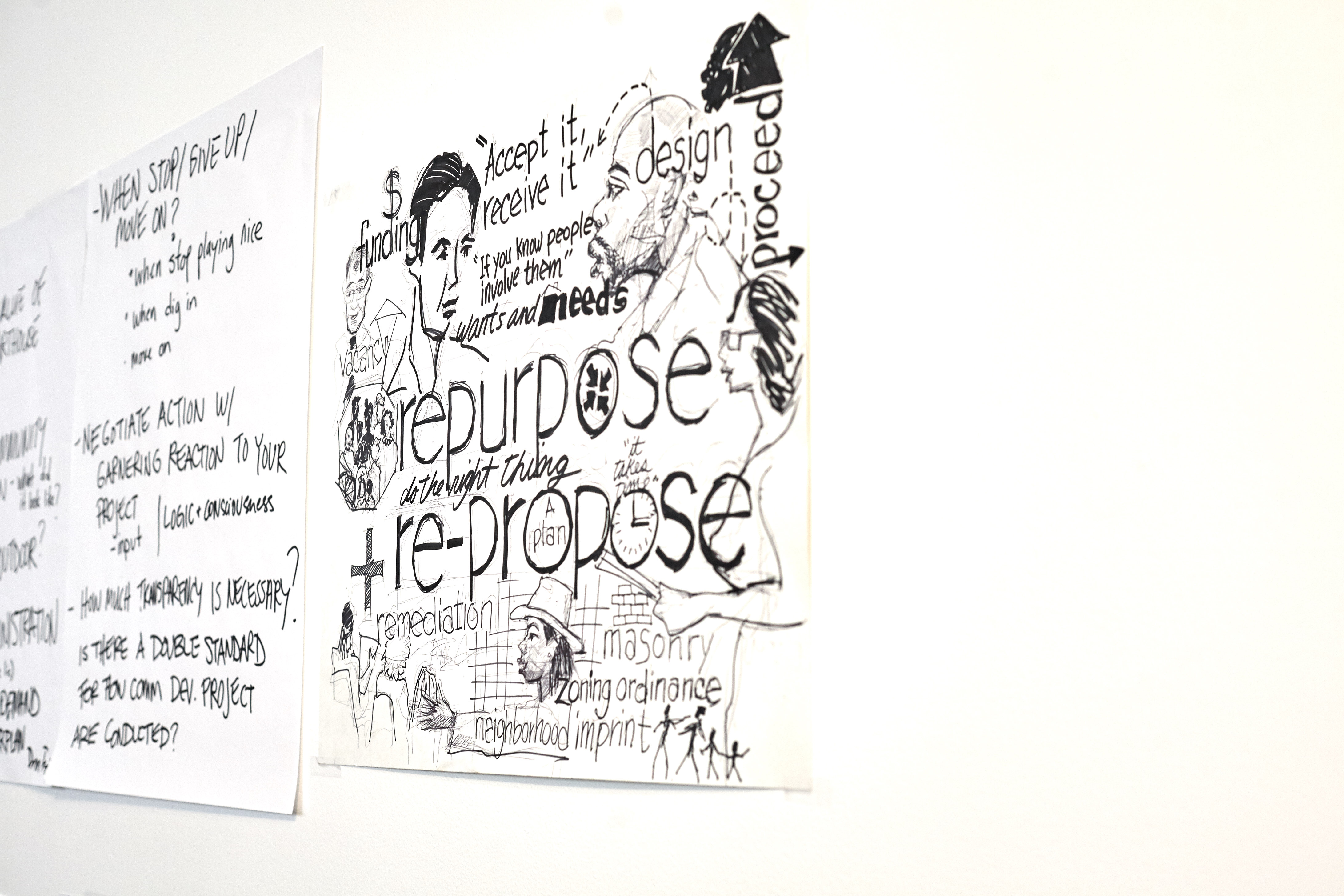 Though the salon was focused on the topic of “Repurposing and Re-proposing,” the members discussed much more than adaptive reuse and placemaking. The conversation seemed to dance around the notion of vision, even without saying it directly.  To the salon members, vision sometimes is the only tangible tool they possess. But when coupled with the declaration that if you love your city, you are obligated to shape it—vision becomes action. The evolution from intention to action is, in fact, what makes ethical redevelopment possible.

The salon revealed, and then all members spoke, in a shared language—one of capacity and conviction. These were individuals that looked at assets rather than needs. These were individuals who know that real challenge begins when you look at what is in front of you and ask what else it could be. “Something has to be birthed,” said Theaster Gates.

In true Place Lab spirit, a rooftop concert closed the salon as members made final connections and finished conversations that had really just begun. Given more time, salon members could have further unpacked any of the topics they touched on: tactics of neighborhood restoration, spatial prejudice, building cultural archives, or even the poetics of creating a new currency based in human capital rather than dollars. Fortunately for the salon members and the great city hosting them, there are eight more salons—or rather, eight more opportunities—for those members to get to work.