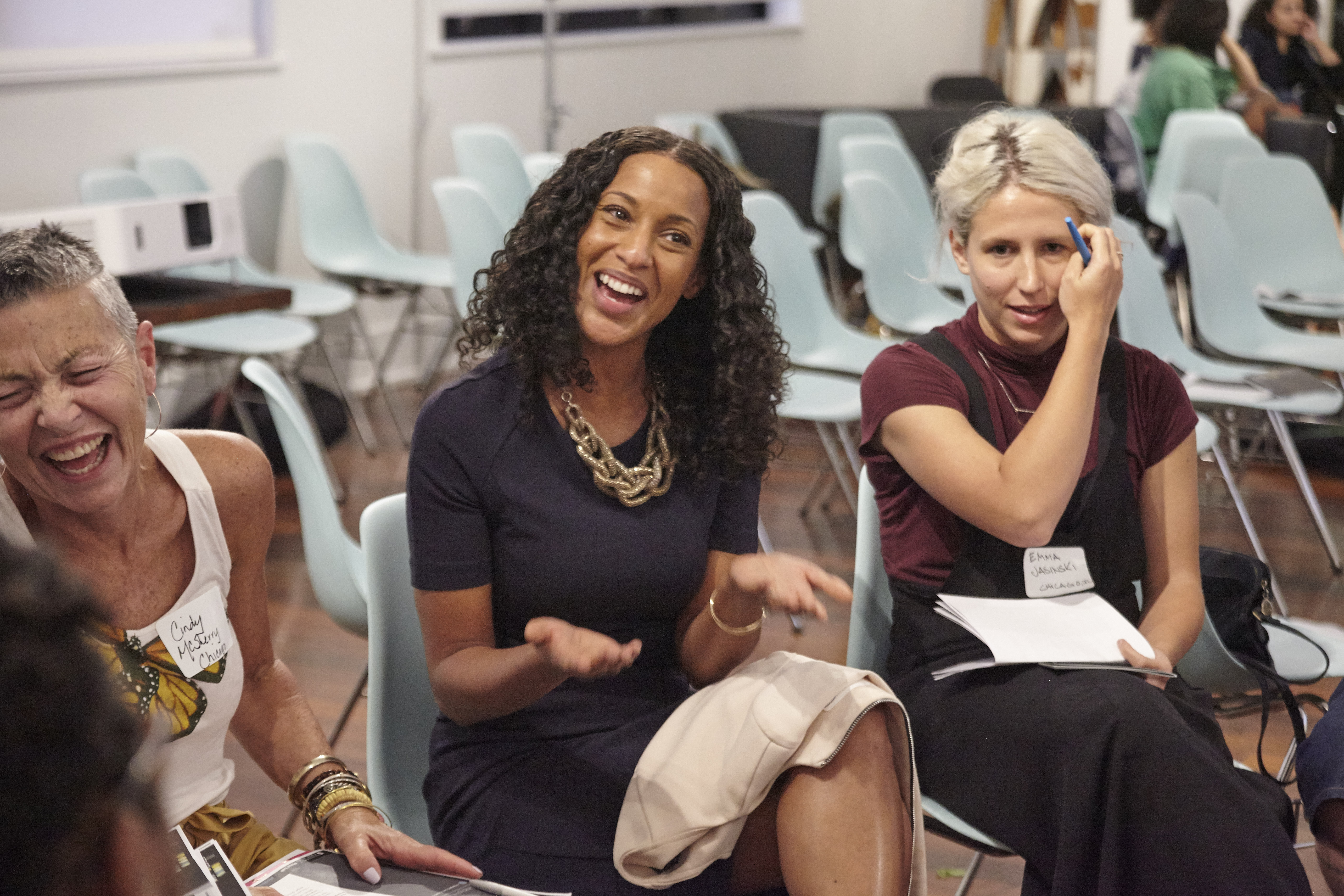 Over the past year, the University of Chicago’s Place Lab started a nine-part salon series that brings together practitioners, neighbors and urban devotees to create an action plan for ethical redevelopment or, what Place Lab describes as the “process and values of mindful city building.” The first salon of the series, “Repurpose and Re-propose” took place in July. A second meeting, held in early September, centered around the topic of “Engaged Participation.”

Ethical redevelopment calls for engaged participation that cultivates and builds upon neighborliness, or, as some say, it is “a cultural practice of reciprocity and interdependence.” Befittingly, salon members began their second convening at the Jane Addams Hull-House at 800 South Halsted. Social settlements of the nineteenth century, like the Hull-House, were created in response to, for lack of a better term, the “ills of urbanization” and the adverse effects of industrialization on a city’s most susceptible populations.

The history lesson there was that the settlements were founded and staffed by passionate individuals that brought kindergarten, employment services, art, healthcare, English language and citizenship classes to some of the most densely populated and immigrant-rich communities within urban areas. The breadth of crafted, and at times coincidental, programming and interactions designed by Rebuild Foundation, Place Lab and neighbors of Grand Crossing is not a far cry from the activities and resources Jane Addams brought, alongside mothers, union workers and residents, to Chicago a century ago.

Following the Hull-House, salon members visited The Dorchester Art and Housing Collaborative, a thirty-two-unit mixed-income rental community in Grand Crossing that features a stunning, naturally lit arts and convening space. The Dorchester hosts artists-in-residence, engenders the close watch of attendant grandmas, and welcomes the frequent creative musings of students from the South Shore Fine Arts Academy. The arts center is available for use by residents, artists and neighbors, some of whom needed a practice location for their newly formed dance troupe, “Ladies with Class.”

Led by Rebuild Foundation along with Landon Bone Baker Architects, the Chicago Housing Authority and Brinshore Development, the Dorchester is the result of the complete rehab of the former Dante Harper housing project. Together this team began the transformation of the property from an eyesore into a neighborhood stronghold.

The possibility of transformation in lieu of demolition began this multifaceted effort. The project showcases the possibilities of offsetting Chicago’s affordable-housing deficit through disparate sources brought together: the community’s social capital, the economic benefits of preservation and the capability of land banks. The Dorchester Art and Housing Collaborative shows us that attentive human input and legitimate transparency are imperative when we set out to strengthen our neighborhoods and propose worthier futures. A building is only a building when it lacks people to give it purpose.

Listening to Jon Veal, communications and outreach assistant at Rebuild Foundation, speak to the salon members in the Dorchester garden that day, I began to form my understanding of what engaging youth from this neighborhood, and from other parts of the city, looks like. Almost every time I go to the Stony Island Arts Bank, the Currency Exchange Cafe, or a Place Lab event, I am met and mesmerized by the engagement and buy-in of young adults who enthusiastically tell me about programming, operations and events. They ask me if I have any questions, if I’d like to sign up for a membership, and they explain the themes of the work of a currently exhibited artist. It’s absolutely delightful. 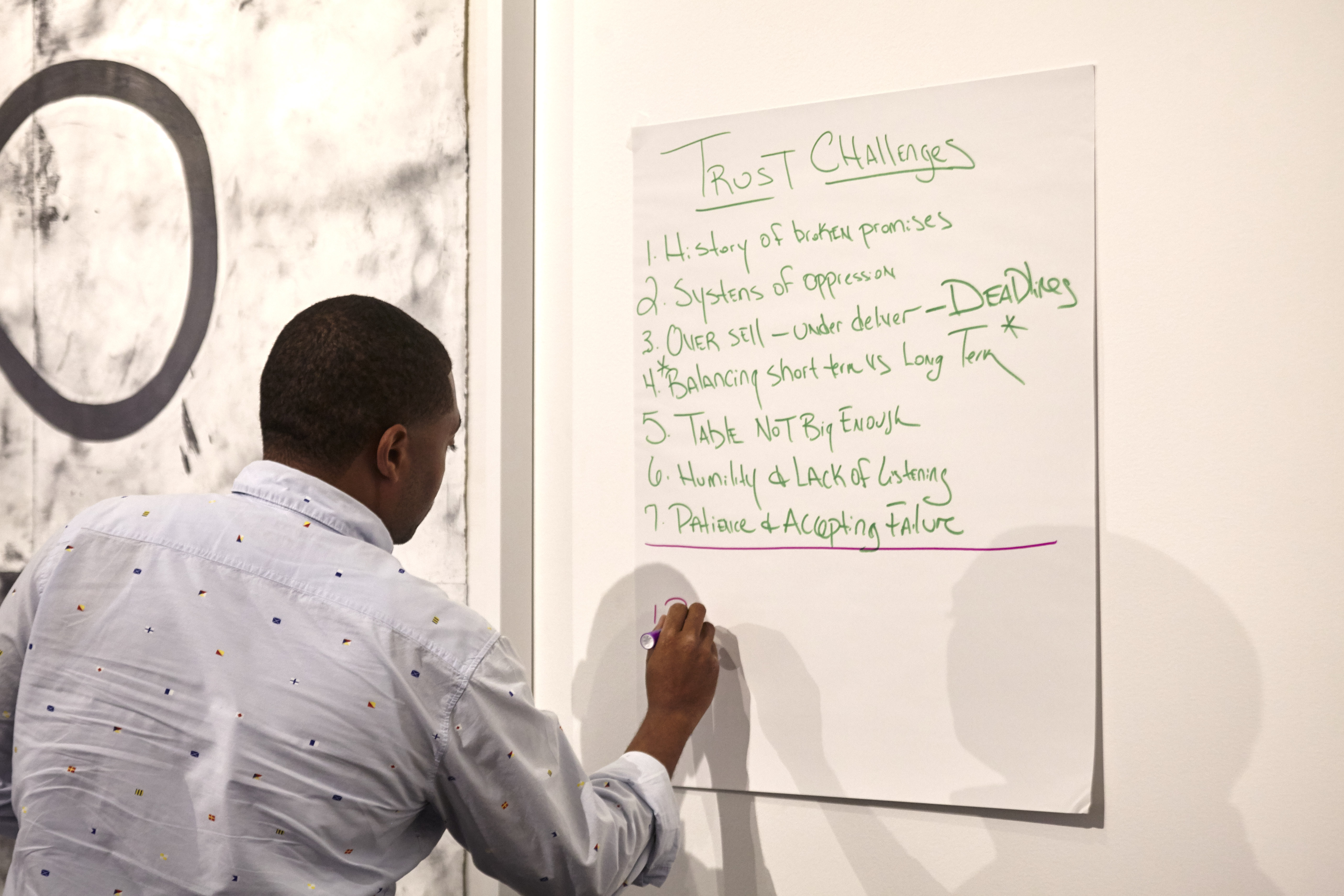 Whether these young adults applied for a job through an online listing or happened to meet Theaster Gates (who created the Rebuild Foundation) at a lecture is irrelevant. What is important is their sheer attraction to the work and their salient maturity. They have become part of a neighborhood revitalization-by-way-of-the-arts movement. Their biographies don’t need to be outlined in any event program or brief for them to put in the work. They are ready to share the same arena as their older colleagues and do it with seemingly twice as much ease. That afternoon in the Dorchester’s sun-filled garden, I realized that Veal and his counterparts are part of the solution in ensuring that the community’s much-expressed desire—to be a part of their own development—is respected and maintained.

During the workshopping component of the salon, we discussed the need for, and how to generate, legitimately engaged participation. The answer? Absolute trust. Earlier this year, the Dorchester received the AIA/HUD Secretary’s Award for Creating Community Connection, a considerable honor, that recognizes the uncommon process of ensuring a promising future by way of human-centered urban development. In search of a way to describe how this process is experienced in Greater Grand Crossing and Washington Park, I returned to the words of Stacy Patrice, who leads complimentary yoga and meditation at the Dorchester twice a week. “All you have to do is come and be healed.”