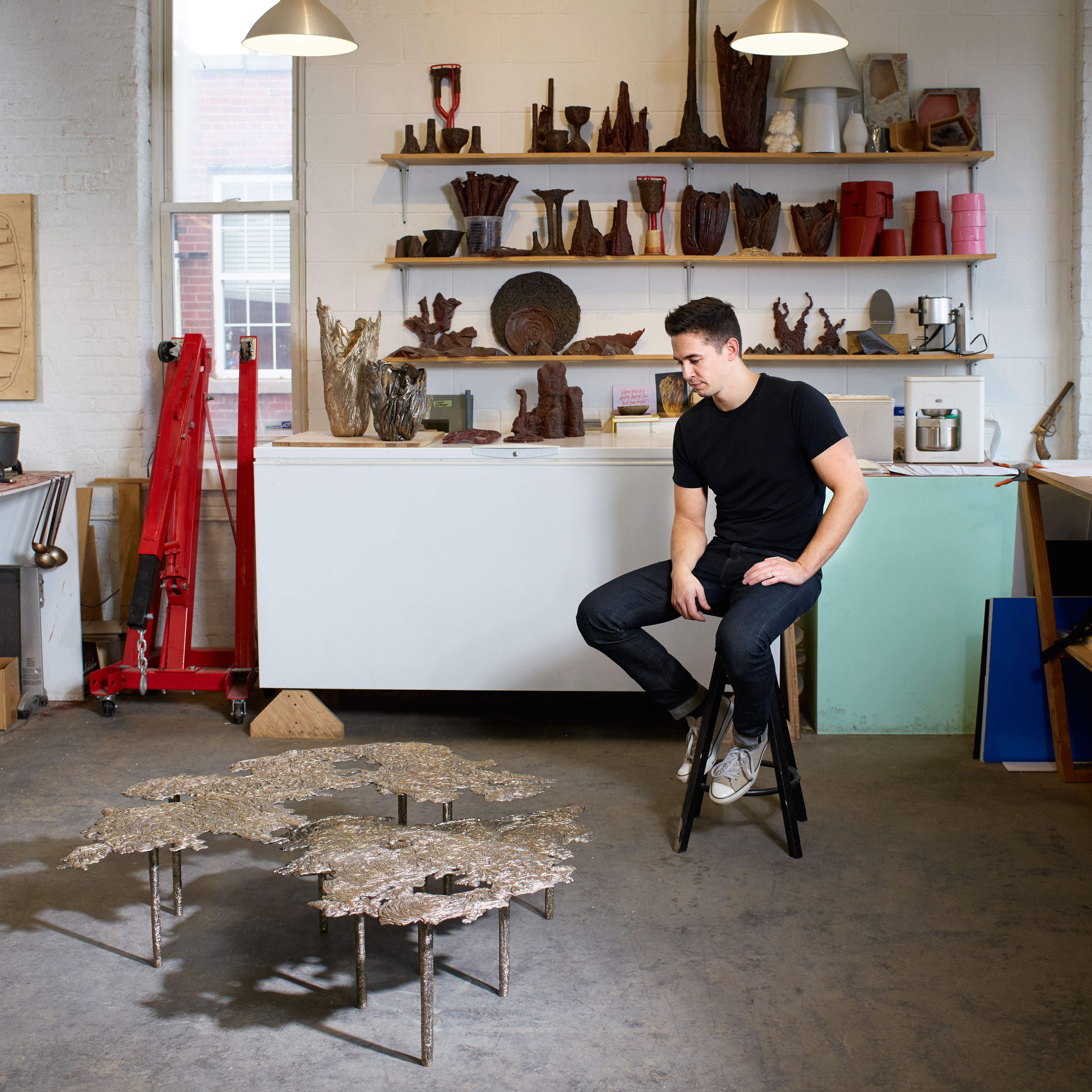 What does this object say about your practice?
The Ice-Cast Bronze Cocktail Table is the largest and most recent piece in the Ice-Cast Bronze collection. The free-form nature of this piece is a good example of the experimental, process-based work that I am interested in. Producing one-of-a-kind objects allows me to work within the umbrella of my unique production method but affords me the opportunity to continue to experiment and push the work further. As a result, my practice is ever-changing and in a constant state of self discovery.

Lead us through your process.
“Ice-casting” is a method that I discovered after attempting to pour casting wax into a frozen puddle in the sidewalk one winter night several years ago. I discovered that the temperature shock of the hot casting wax against the cold ice produced a chaotic, natural texture in the wax. I knew that anything I could produce in wax could be translated into bronze via the lost wax process.

Do you start with trying to answer a specific problem or simply work off of a creative impulse?
I have been thinking about ways to add new or different variables to the process to achieve different results. I started to discover that the most interesting details in my castings were those that I could never have designed or planned but were created by the process itself. I am interested in the idea of creating a loose framework by which the pieces are realized rather than trying to control something that doesn’t want to be controlled. I know that if I am able to create a unique system, the resulting object will be equally compelling.

How much iteration precedes the final result?
Most of the time when creating a new piece, whether it is in bronze or sand or anything else, I begin with hands-on type of research. My process is very impulsive and relies heavily on tinkering and trial and error. I often begin building, carving, combining materials without a clear intention of an end goal. The object begins to reveal itself closer to the middle of the process. Sometimes the original intention is abandoned after making a new discovery along the way and often the piece changes several times along the way before settling on a final form.

How do you gauge the success of a project?
My favorite part about this method is that the results are always a surprise and the possibility for variation is endless. I am always excited by the outcome and if the work continues to push the limits of the material, to me the pieces will be successful.

Steven Haulenbeek is the principal of his eponymous firm, specializing in furniture, lighting and experimental objects. stevenhaulenbeek.com