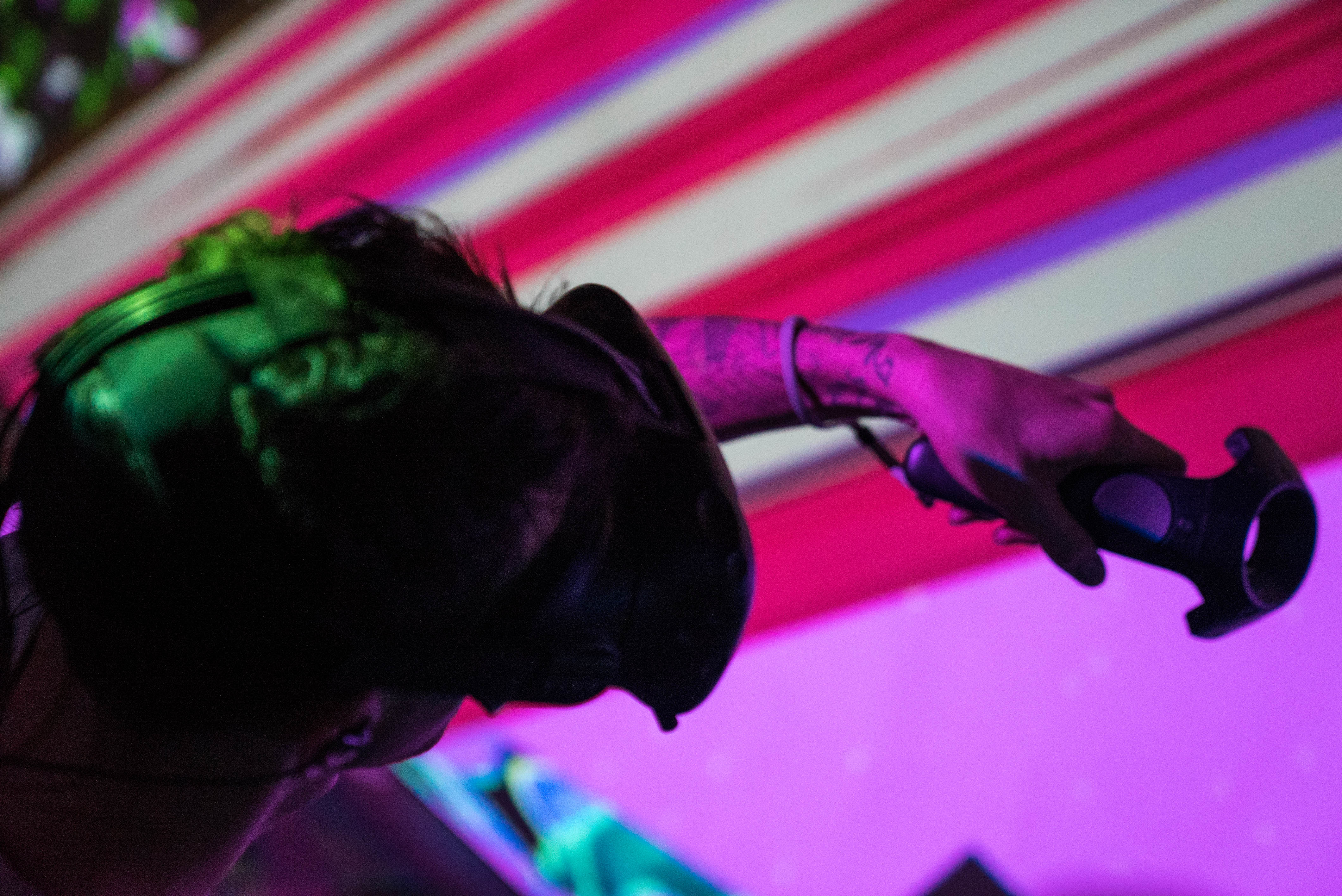 Sub Chroma, a happening that took over a West Loop space this past November, is a wildly colorful mosaic of the city’s diverse creative scene, all meeting at the intersection of art and technology. Drawing virtual- and augmented-reality technologies away from their “signature” industries of tech and gaming, and straight into Chicago’s art world, the annual event exists in the blurred lines between analog, digital and virtual worlds. Sub Chroma is an exploration of extra dimensions, optical illusions, light projected onto static objects, turning them into interactive displays. The space turns into an otherworldly mashup of pinks, purples and blues, where nothing is off limits—not even the guests, who are encouraged to wear all white so they can also be used as canvases to project onto as they move through the space.

Held in a 12,000-square-foot-industrial warehouse in Chicago’s West Loop, Sub Chroma, now three years old, moves the art experience outside the traditional gallery setting. Guests interact with art through virtual-reality headsets and experience alternate realities, while projection-mapping applications and live digital-painting performances triggered by audio create individualized audio-visual narratives that reinvent creative expression and perception. Behind the scenes of  the immersive art party is Canvas, a collective of artists, designers, producers, technicians, entrepreneurs and innovators that connects the city’s creative community by pushing its cultural and artistic boundaries and hosting one-of-a-kind events. “Our intention is to create powerful and effective experiences,” says Preston Jones, co-founder and director of Canvas.

Sub Chroma this year was divided in three galleries. The Analog gallery featured paintings and sculptures by visual artist Lefty Out There—think free-flowing lines creating elaborate patterns. In the Digital gallery, visitors experienced the artwork, imaginative worlds and a fake-pregnancy through virtual reality headsets (see “Preterna,” a piece by Toronto-based artist couple Jeremy Bailey and Kristen D. Schaffer realistically simulating a pregnant body). In the next room visitors had the opportunity to wander around virtual spaces and make some art of their own by strapping on virtual reality headsets.

In a collaborative effort between DJ/producer Derrick Carter, projection-mapping artist Drmbt (and Canvas co-founder, Vincent Naples), and street artist Lefty Out There, the main event space was transformed into a 360-degree canvas. The music beat in tune with the projections, while Lefty’s work, created within a VR headset with the help of Google’s Tilt Brush, enveloped the room in real time. Guests dressed in white and models styled in shimmering wigs and glowing makeup lit beautifully under the video projections that turned the space into a luminescent fairyland.

“The words multimedia, interactive and immersive get thrown around a lot,” says Naples, “but with Sub Chroma we try to explore what it really means to collaborate across mediums. With elements of music, virtual and mixed reality, dance, fashion, painting and installation art, we hope that we can create a truly immersive environment that celebrates this intersection of art and culture.”

Part dance party, part gallery and part high-tech extravaganza, Sub Chroma, offers more than a good time—it brings about in-depth conversations on art and technology, sparks new ideas for collaborations and provides new ground for creativity. “It’s all about giving artists the autonomy to create a space that is an extension of their practice,” adds Naples, “a surreal DIY space that exists beyond the opening as something that can be continuously developed, adapted and iterated upon.”

Sub Chroma describes itself as “an experience of human expression at the convergence of analog, digital, virtual and sonic artwork.” True to their nature and staying as deep into alternate realities as possible, Canvas’ recent New Year’s party, “Voyager,” brought outer space into the mix with speculations on alien civilizations and stories involving the Voyager spacecraft. In the complicated times we live in, maybe it’s alternate realities like the ones offered by Canvas that will save us—even for just one night.