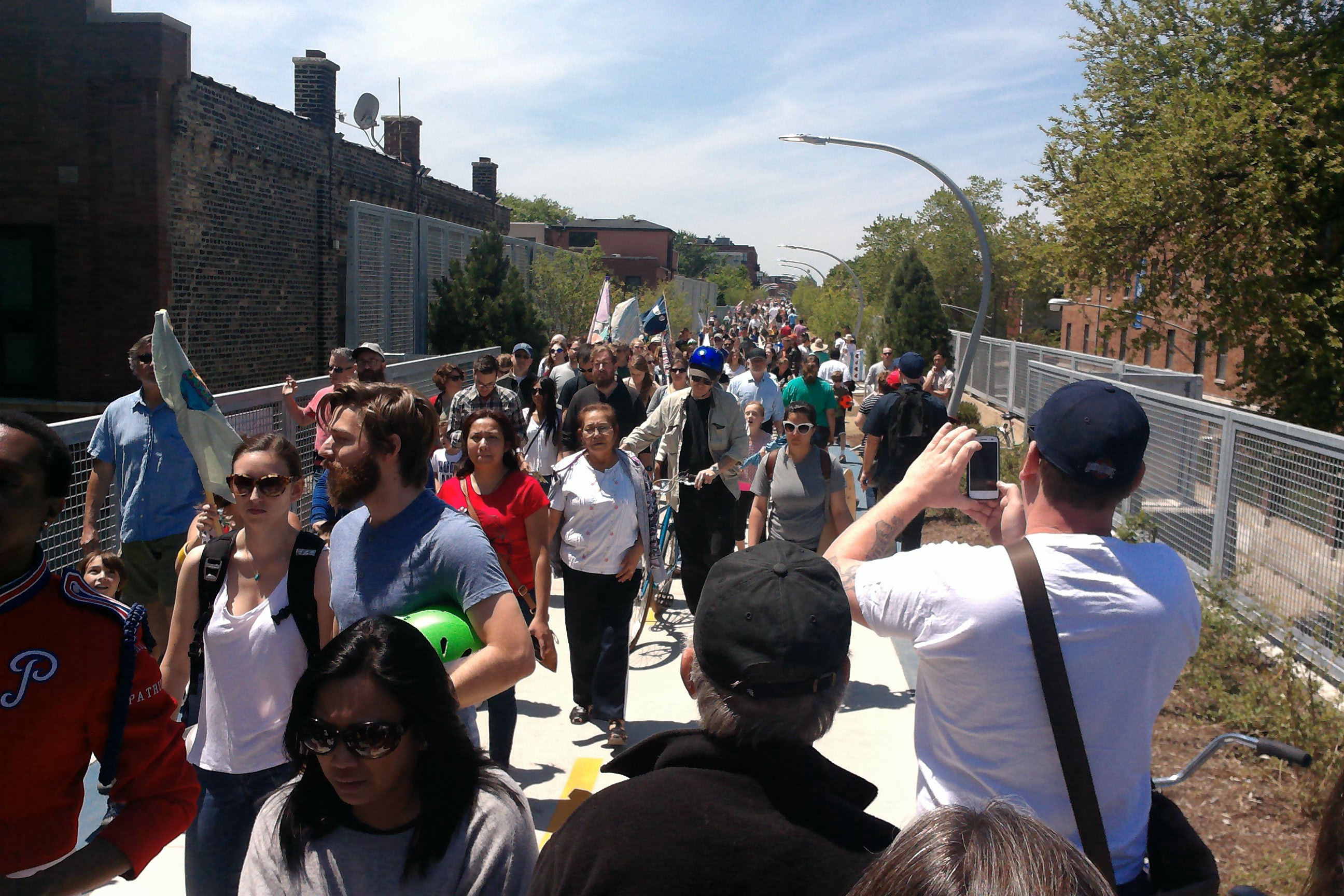 The opening weekend of The 606, in 2015/Photo: Andrew Vesselinovitch

I will assume, without scientific proof, that it is vital for a democratic society, one in which different voices can be heard, to have urban spaces in which people with varying beliefs and backgrounds mix casually. In most of human experience, such spaces have existed. Though social spaces themselves do not necessarily ensure a democratic society, to have one all but requires them.

This need is heightened by contemporary issues that heighten our separation through technology. Anywhere in the world touched by industry and electricity, people have physically separated themselves from others. The automobile, telephone and, now, high-capacity personal computing devices, have allowed us to segregate into groups with which we identify—racially, economically or politically. The downside of this “personalization” is clear—a lack of knowledge of the “other” and, at its worst, its demonization. Life is nuanced, not black and white, and the physical world and face-to-face meeting can remind us of the reality of contradiction and gradation.

In Chicago, we have examples of public spaces that work well. Some of these spaces are well known to Chicagoans, while others are best known within their neighborhood. We have Millennium Park, Daley Plaza and the Chicago Riverwalk. In design, they are very different—a multi-acre park, a paved public square and a linear park. They are all active and have their attractions. We also have places like Mariano Park on the Near North Side and The 606 on the near Northwest Side.

All of these spaces are successful, by which I mean that a broad range of people use them and that they are visited repeatedly. They are places of integration, where one can start a conversation with people who may not share your Facebook “likes” or flow through the filters that we use to align ourselves with the likeminded in the digital world. These places and others provide Chicagoans with the opportunity for this kind of enriching “reality check.”

Various people over the years have written about what makes these types of places work, most notably William H. Whyte and Jane Jacobs, two thoughtful and observant students of the urban environment. Others have implemented policies that enrich their city’s public spheres, such as Enrique Peñalosa, former mayor of Bogotá, Colombia.

For an urban public space to be successful, it must feel welcoming to a broad range of people and be interesting enough for repeat visits. Admission to the space must be free and there should be places to sit and things to see and do. As William Whyte said, a huge draw for people is the ability to watch others. He also defined the concept of “triangulation.” This could be anything that gives strangers an excuse to speak to each other, such as performers.

Daley Plaza is not a lovely place, but it is a lively one. With the exceptions of the fountain and trees in its southwest corner, there is little comfort offered in its design. Early in its life, Picasso’s sculpture was a spectacle and served Whyte’s triangulation role. The sculpture has since receded into the landscape and sometimes functions as a grand slide. 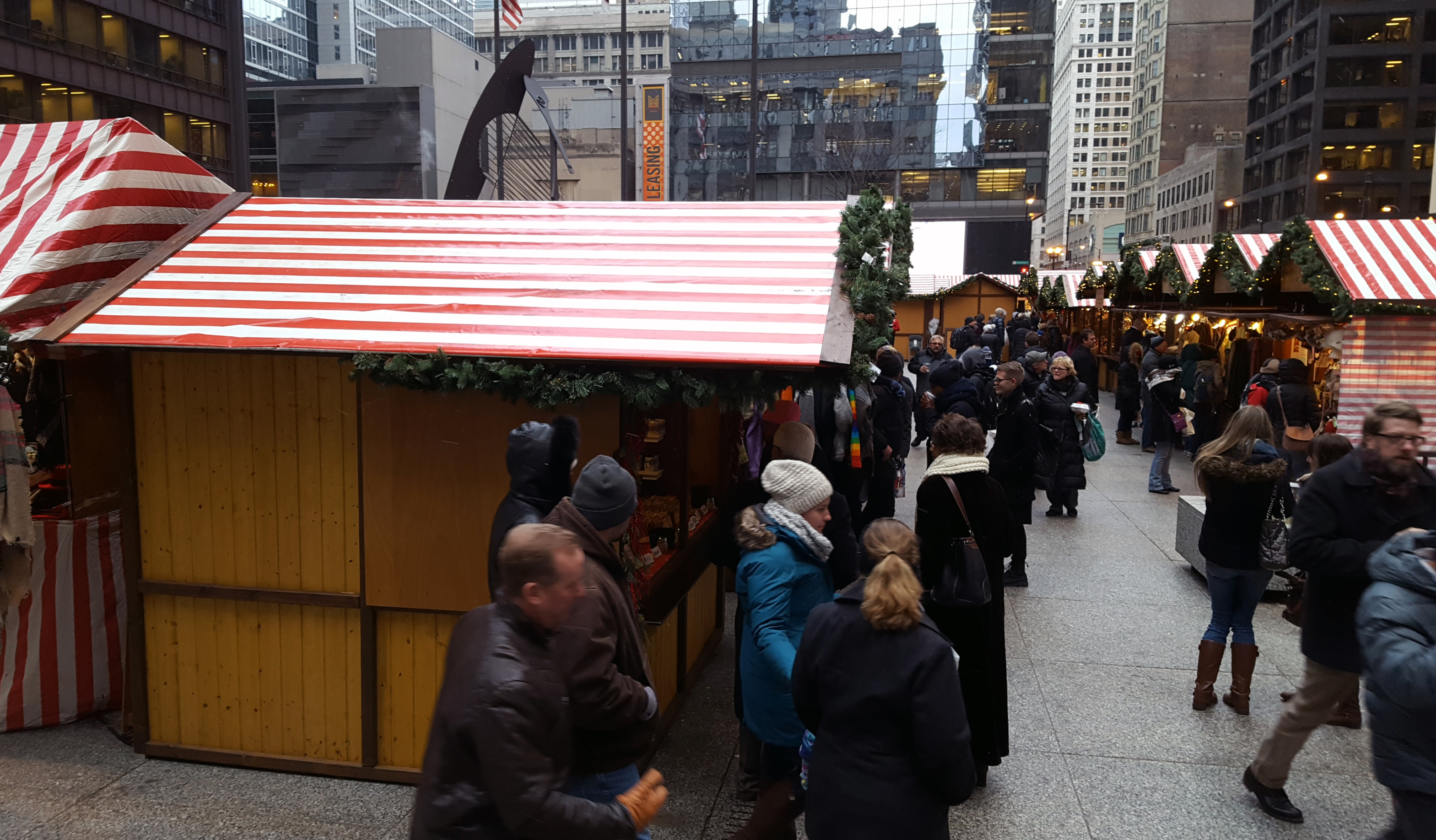 Smartly, the city of Chicago has overcome the Plaza’s design limitations by implementing a busy program. When I checked a few years ago, there were 200 events scheduled annually. I believe that all of the events are free to attend, even the ones that are commercial in nature, such as the farmers market. Indeed, shopping is a successful way to animate a place. Consider the difference between Daley Plaza and the Federal Center Plaza, a few blocks to the south on Dearborn Street. Similar architecturally, both with grand sculptures by top artists, only the former is alive with activity.

Heavy programming is not needed to make a successful space though. The 606 opened in 2015, a 2.7-mile-long trail and park that runs on top of a century-old railroad viaduct. It threads through and between Bucktown, Wicker Park, Logan Square and Humboldt Park. Here, triangulation is achieved through its very nature. The narrow path forces all people to be in close proximity to each other, while its position above the street reveals a succession of views into the neighborhood and the distance, as well as people’s homes. While it draws visitors from far away, its primary benefit is to the neighbors who use it repeatedly. In the warm months, it becomes a “passeggiata,” the wonderful Italian tradition of taking a walk just to see and be seen.

Many of the most lively spaces are in Chicago’s greater central business district. This makes sense—this is where the greatest concentrations of people can be found. However, as The 606 shows, the opportunity is there to create successful public spaces in the neighborhoods.

Opportunities to create lively spaces in neighborhoods are places where people already congregate, such as transit stops, commercial districts and schools. Elevated line stations located within the urban fabric are prime candidates for these kinds of improvements. Indeed, this is the condition with the Argyle Street rebuilding in Uptown. There, the street has been rebuilt to minimize the distinction between the roadway and sidewalk, making it easier for pedestrian activity to expand into the former. Until streets are rebuilt, Chicago could tap into its tradition of street fairs and farmers markets, for example closing streets at train stations on designated days.

High-quality public spaces can be expensive to build. Millennium Park cost approximately $500 million, the Chicago Riverwalk west of Michigan Avenue, $100 million, and The 606, a little less than $100 million. However, we should take advantage of the billions of dollars that are spent on related construction for streets, highways and public transit. As sewers are replaced, streets could be rebuilt to encourage social interaction.

Of course, to have successful public spaces in Chicago presupposes a dense enough population to guarantee that people may show up. Policies to discourage driving and encourage walking, bicycling and the use of public transit help. A communal choice to put away the phone is also essential.