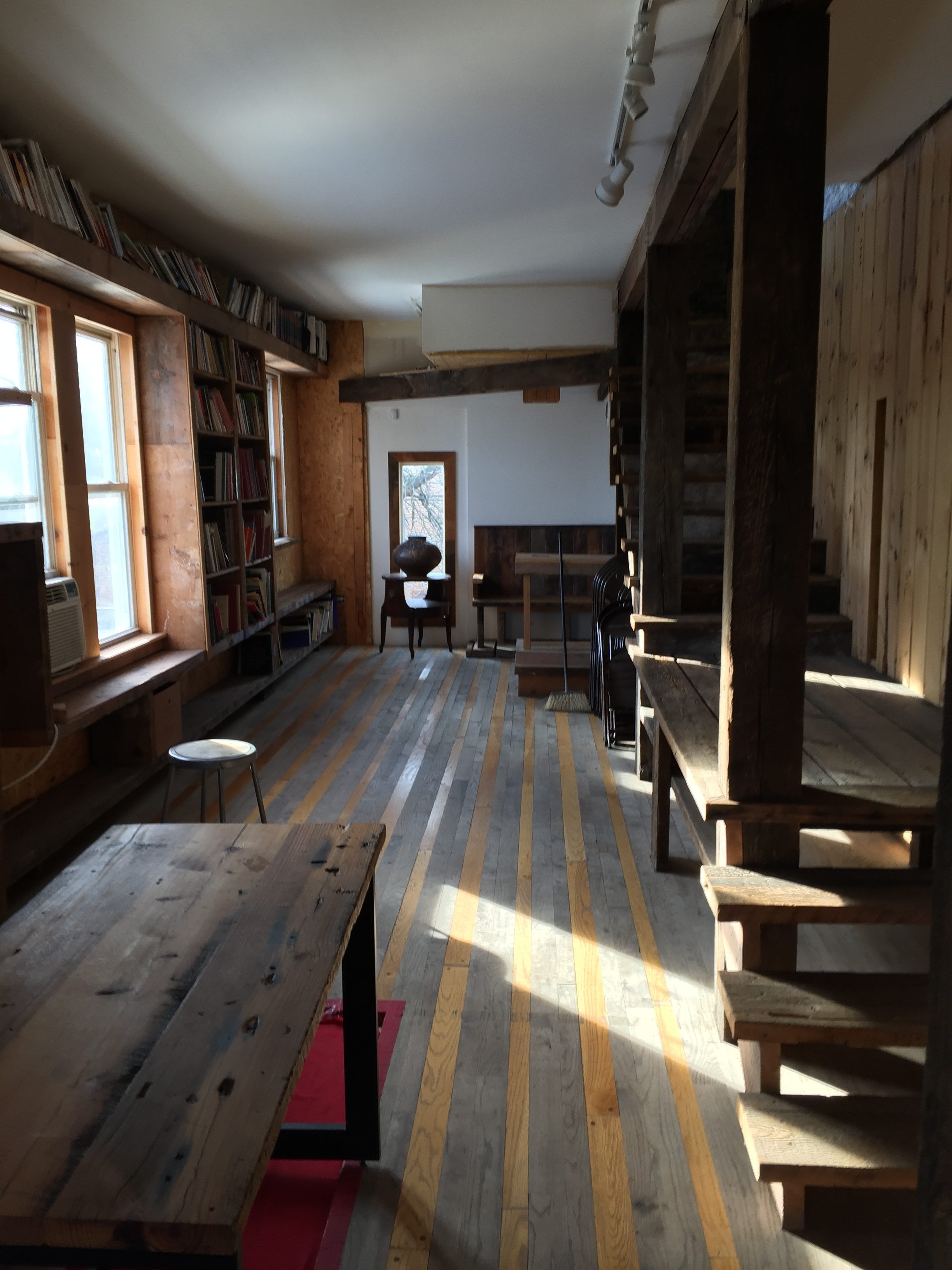 Place Lab’s fourth Ethical Redevelopment Salon, with the theme The Indeterminate, provided an opportunity to explore the interstitial spaces where cultural alchemy and the metaphysical aspects of redevelopment take root.

On an afternoon in mid-November, a small group from the Salon series cohort made our way through the Archive House and adjacent Listening House, Theaster Gates’ early creative settlements in the Greater Grand Crossing neighborhood. Place Lab’s building strategist and construction manager, Mejay Gula, Gates’ longtime collaborator, led the tour of buildings that once served as ground zero for Gates’ radical work to transform community redevelopment ideas and practices.

The sunny day, unseasonably warm and mild, seemed unaffected by the previous week’s shocking election. So, too, we sat, smiling bravely and chatting cheerfully, in a jagged semi-circle in the Listening House when Leslie Koch arrived. The up-until-recently President of the Trust for Governors Island, Koch came to discuss her ten years directing the development of New York City’s new public park.

Governors Island is a 172-acre former military installation, part natural land, part landfill, just south of Manhattan, with a panoramic view of the Statue of Liberty and New York Harbor. Koch was brought on in 2006 and asked to create a vision for the island, which she promptly refused to do. Instead, Koch approached her assignment with the understanding that vibrant cities and public places are messy: they develop as people use and create them. She asked not “what will Governors Island be?” but “what questions do we ask?” and guided her team to use intuition and experimentation in creating an entirely new public place to reflect, nurture and be “deeply welcoming” to New York City’s diverse cultures and communities.

The result is a spectacular park designed for cycling; for climbing and sliding on the recently opened Hills; for recreating with hammocks, mini golf, baseball and badminton; for art exhibitions, punk band and classical music concerts, food festivals and flash mobs. The unique and risky beauty of the process is that Governors Island does not fund, select or curate events and projects hosted there—all programming applications are submitted online and considered first-come, first-served. As Koch noted, some of the art displayed can be quite bad. But in relinquishing ideals of artistic quality and perfection, Governors Island achieves the democratic ideal of equity in ownership, reflecting a core commitment to addressing issues and questions that have become especially important post-11/9: Why do cities and public space matter? How do you create more opportunities for people to be in physical space with other people who don’t look like them?

The conversation spilled into earnest, searching dialogue about how we foster inclusive communities, not just in the nation’s first city of commerce and culture, but in rust-belt cities, rural communities and suburban enclaves across a divided nation.

In his own post-11/9, “more sober” introduction to the evening session at Stony Island Arts Bank, Theaster Gates reflected that he had justified the Ethical Redevelopment series to funders, knowing something would come of this structure-making exercise. Now, Gates issued a blunt call to action, saying the enterprise can do something much bigger than the grant requirement, something interesting in cities across the country—so let’s “be the fuck about it!”

Brent Wesley, founder of Akron Honey Company, started off a panel discussion with four salon members. He described the purely intuitive process, motivated by desire to “build better people, build better places,” which led him to buy the vacant lot around the corner from where he lives in West Akron, before he knew how he would use it. Inspired by a love of honey, and a childhood family trip into Amish country where he tasted raw honey for the first time, Wesley loaded a couple of apiaries, roaring with the sound of bees (“don’t try it”), into his trunk. In less than three years, Wesley’s experiment became Akron Honey Company, with second and third locations in East Akron, a site for summer market days featuring local vendors, and a fledgling line of skin care products with the goal of offering customized products and experiences similar to a microbrewery.

As the Great River Passage Fellow for the City of Saint Paul, Angela Tillges, formerly with the Chicago Park District and Redmoon Theater, is charged with developing programming based on a master plan for the seventeen-mile stretch of the Mississippi River that flows through twenty-six miles of riverfront and 3,500 acres of parks, public space, natural areas, wetlands and lakes in Saint Paul. Tillges, a Saint Paul native, acknowledged that implementing all 321 projects outlined in the master plan is not a realistic or even desirable goal, and, instead likened her process to planting seeds, then weeding or watering what comes up. Tillges recognizes that she’s walking a fine line managing aspects of the indeterminate that may appear indecisive, uncommitted or unresponsive.

Ernel Martinez and Keir Johnston, members of the Philadelphia-based Amber Art collective, are working with the Fairmount Park Conservancy to bridge a cultural divide between the African-American community of North Philadelphia and the historic Strawberry Mansion district, situated within the city’s largest park. Historically, residents have felt unwelcome in Strawberry Mansion, and have not benefitted from Fairmount Park’s cultural and recreational amenities. The team will collaborate with area residents to create a community museum in one of the district’s vacant houses, collecting and curating artifacts and personal histories that reflect the rich cultural history of a community along the Lancaster Avenue corridor, home to jazz greats like John Coltrane.

When moderator Steve Edwards asked about curiosity as an indeterminate, Martinez noted his curiosity about personal histories—the histories of a community, family, house or block—and the importance of asking questions to elicit those histories. “If you talk to and teach people, that’s how you facilitate dialogue. That’s how you learn.”

So what questions do we ask, as we anticipate our collective work in that deep, thick fog of the indeterminate through which we peer at the next four years?