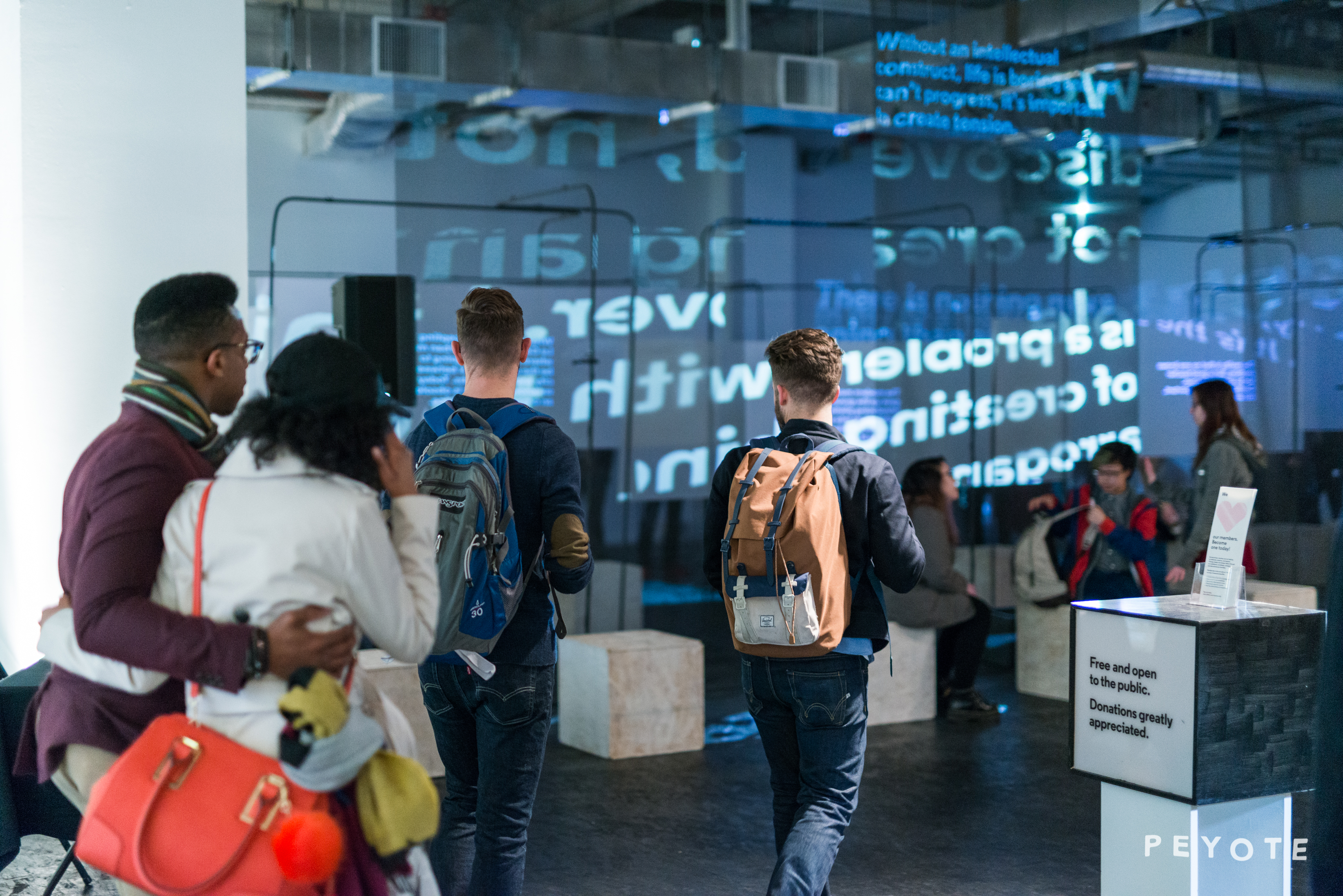 Chicago is the second stop on what is planned to be an endless world tour for one-time architect Vladimir Belogolovsky’s ever-growing collection of recorded interviews with architects. The exhibition, “City of Ideas: Architects’ Voices and Visions,” on display now at the Chicago Design Museum (ChiDM), is meant to travel the globe indefinitely, with a continually growing store of interviews, to be reinterpreted each time by its hosts.

As a curator and writer and former architect, Belogolovsky travels often, reaching out to architects of record wherever he can find them. “City of Ideas” is a low-light and dramatic immersion of ten architects, including Kengo Kuma, Zvi Hecker, Thom Mayne, Will Alsop and Chicago’s Jeanne Gang, among others. Quotes are projected on surfaces around the exhibition space, with drawings and transcriptions that can be heard or read.

The museum has only a very small number of paid staff members. Its foundation is in its many volunteers’ visions and labor. The museum doesn’t have docents. Instead each exhibition is conceived of, designed and constructed by local volunteer designers.

“The shows really come to life when we decide on a direction and experiment with materials, figure out how the content works, and see how things change, while still staying true to the original vision as much as possible,” says Michelle Kliman, design lead on the exhibit. The custom, on-site build was done with little intervention from Belogolovsky.

In its first iteration in Sydney, the exhibition “presented the voices of architects to inspire anyone who would come into that space to be in the middle of that stream of ideas,” Belogolovsky says. “We’ve never had such an incredibly rich landscape, with so many ideas and so many voices, and I think it would be good for people in general to know this.” That vision persists in the exhibition at the Chicago Design Museum.

“We haven’t done anything like this with projecting type. It’s an opportunity to push us design-wise to come up with something that’s not preconceived,” says Marcin Szef, the exhibition’s design director.

In presenting the great array of architectural manifestations, the exhibition (or maybe better, Belogolovsky’s project) is a success. But its message remains neither clear nor certain.

“Interviewing is the most direct way to understand where ideas come from. Architects themselves should be the most important source for this information,” Belogolovsky says. “In in-person interviews, people respond without knowing exactly what they’re going to say, so you can see what they really think, at least at that moment.” These are not only the most honest answers; they’re the most contemporary.

“I want to take architects’ ideas out of context and merge them and provoke visitors to form new ideas and generate their own questions and new ideas on what architecture could be,” Belogolovsky says. “What I’m doing is showing all of this diversity, celebrating what is no longer being celebrated. That doesn’t mean it’s the truth, but I’m interested in how architects want to present themselves. Architecture being about itself is an incredibly powerful idea.” (Troy Pieper)