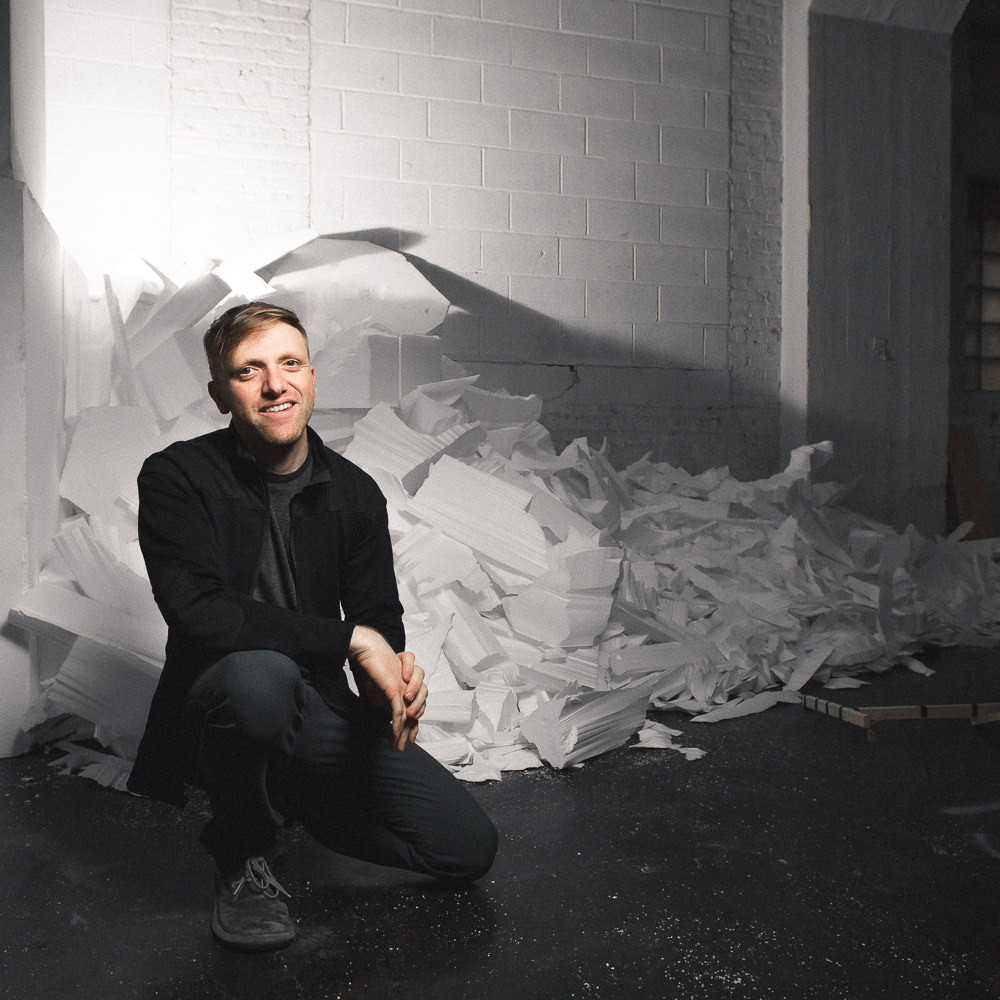 We’re sitting toward the back of the “design zone” at Lost Arts, the incubator-laboratory-coworking-creative-space that Adler runs. Lost Arts has transformed 15,000 square feet on the first floor of Goose Island’s iconic Pickens Kane warehouse, an immense structure that seems to carry the entirety of the area’s historic industrial weight in its heavy brick walls. Around us, a class of visiting students settles in to listen to a presentation, 3D printers hum softly, a staffer runs over to tell Adler about a stubborn garage door that won’t open, all sorts of workstations, spread across the design, prototype and workshop zones, sit in anticipation, already infused with ideas. 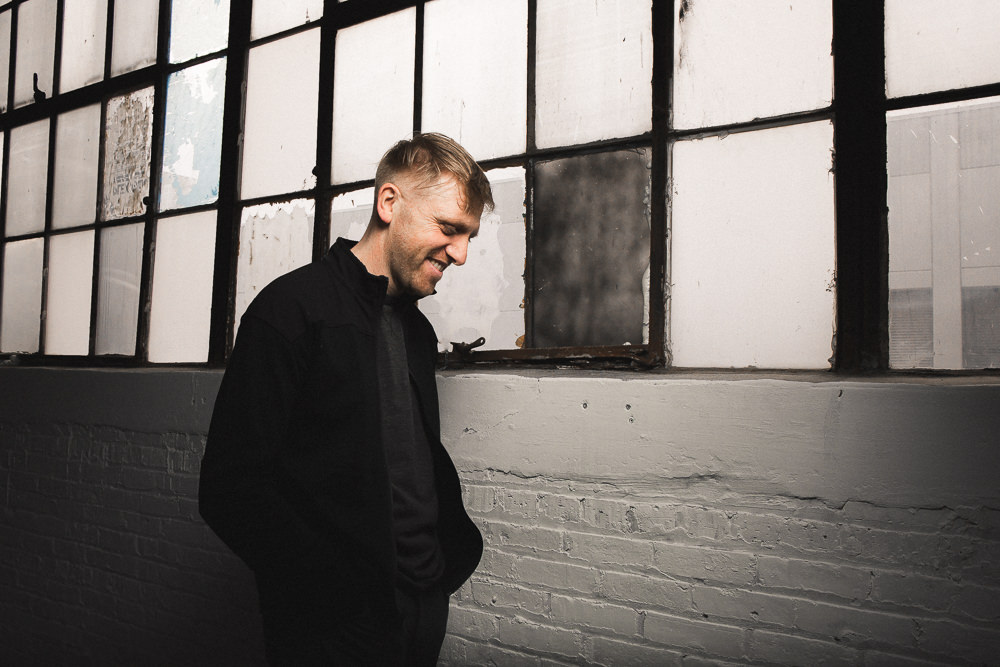 Adler was born in London and grew up in Westport, Connecticut. He went to college at Purdue University where he studied mechanical engineering, though he wanted to be an architect, noting his youthful obsessions with architects and designers like Saarinen, Eames and the Bauhaus. While at Purdue, “living on rice and soy sauce so I could come up to Chicago to buy records at Gramaphone,” Adler started flexing his musical and design muscles. He became a DJ, started designing flyers for shows and taught himself how to build websites on a DIY-HTML site called barebones.html.com.

He dropped out of school, moved to Chicago and started the process of making his “hobby become a profession.” Becoming immersed in Chicago’s DJ culture, and becoming more fluent in building websites in the early days of streaming media, Adler launched Subsystence, a forum for DJs to set up shop in his Roscoe Village apartment and broadcast their sets over the web. “The idea was to give friends of mine another venue,” he says. In essence, it was an attempt to build a network of mutual supporters while building a reciprocal relationship between consumer (in this case, the listener) and producer (the DJ).

Years later, having bounced around all over the world and settling in New York for day-job commitments, and having sunset the original Subsystence site and relaunched it as a highly designed, tightly-curated online arts magazine, Adler would refine his original idea—to bring creative people together in direct connection with others—with friends Perry Chen and Yancey Strickler to launch Kickstarter in 2009.

By the time Kickstarter had launched, Adler was actually back living in Chicago with his wife and their young daughter. The success of Kickstarter pushed him to New York in 2010, where he remained until 2013, when he left the company. He returned to Chicago to be close to his family and to figure out what came next. “It was analogous to the time I left school,” he says. “Something about Chicago and the Midwest keeps pulling me back. A bit of that romance is built on the network I had built.”

Lost Arts is the culmination of Adler’s romantic ideal of cultivating networks with providing a space for creative work across many disciplines. It’s the embodiment of “making the invisible creative [process] more visible,” he says. Practically, Adler offers that Lost Arts is a “space to ‘build space.’” It goes beyond the now-nearly ubiquitous idea of co-working or maker spaces by offering itself first and foremost as a place of access: for tools, for practice and for mentorship.

Roman Titus is a Lost Arts member. A photographer by trade, he left his graphic design and branding studio, and after watching a TED talk about “how mushrooms could save the world,” decided to try growing mushrooms on his own. After successful grows, the mushrooms overtook his apartment.

His firm Sojourn Fare aims to “make farming accessible to people.” He wants to “make the small farmer into a medium farmer” and use mushrooms as a conduit to change the delivery—and perception—of how food systems work. His setup at Lost Arts is like a mad scientist’s mycological dream come true: clear boxes of enormous fungi are hooked up to computerized sensors, not-so-little brains getting stronger, smarter and bigger in climate-controlled coolers. “Lost Arts offered the multiple pieces of manufacturing process, enabled by 3D printing, right there,” Titus says.

But his circuitous route to becoming a mycologist—a designer leaving an established operation to envision a new way to improve an existing system—mirrors Adler’s own path toward creative endeavors. Adler’s understanding of the “VC/financial world and how to connect the dots,” is invaluable, Titus says, as he looks to scale his growth to a commercial level. “There are blurry lines between what’s an artistic venue and an entrepreneurial venue,” Adler says, articulating a philosophy echoed by academics like Richard Florida about harnessing—and appreciating—the economic value of creativity.

A number of Lost Arts members seem to follow this unorthodox bridge over disparate disciplines and backgrounds. There’s the accountant focused on woodworking. A healthcare industry worker designing and prototyping a new ergonomic shoe for working women. The artist building large-scale tigers and octopi.

Jessica Gorse is a student in the School of the Art Institute’s Designed Objects program. The thirty-one-year-old designer went back to school with a focus on “synthesizing the creative and analytical mind.” Working with two partners (Soniya Khasgiwale and Erin Delaney), Gorse has conceived Fertile Design, an effort to create a way to turn runoff waste from breweries into biodegradable plates “embedded with the seeds of plants native to the Illinois prairie.” Basically, it’s a disposable plate made of discarded material that you throw into the ground that breeds flowers.

Gorse and company came to Lost Arts “needing a huge wall to do mind-mapping,” she says. “Charles was flexible to [allow us] to use the space as we needed it,” she adds. The connection between Gorse and Lost Arts was made through SAIC professor Douglas Pancoast. SAIC, among other institutions, is increasingly using Lost Arts as a learning environment outside the classroom, whether for standalone events or as a conduit to enhance the collisions between designers. “A big aspect for me,” Gorse says, “is to be surrounded by designers. It’s nice to go to Lost Arts and have a community, to be surrounded by peers or those more advanced.”

The spillover effect from interaction is intentional. As Adler says, “Lost Arts is not meant to be a linear-minded space. It’s a Montessori school for creatives.”

Adler himself is understated about his cultural reach. Yet beyond his work at Lost Arts, serving on the board of the Active Transportation Alliance, Chicago Design Museum and the Wabash Lights, as well as supporting numerous other ventures, it’s impossible not to feel his presence across multiple facets of Chicago’s design world.

“Charles is an important presence in Chicago,” architect and MAS Context publisher Iker Gil says. “If with Kickstarter he created a new way of supporting independent artists anywhere, Lost Arts provides a local physical environment to bring together creatives from diverse disciplines in one space. When many organizations have a narrow mission and audience, it is important that others like Charles are creating places to break those boundaries, bringing people together to support each other’s work, be aware of others in the city, collaborate, learn, share, celebrate and be challenged.”