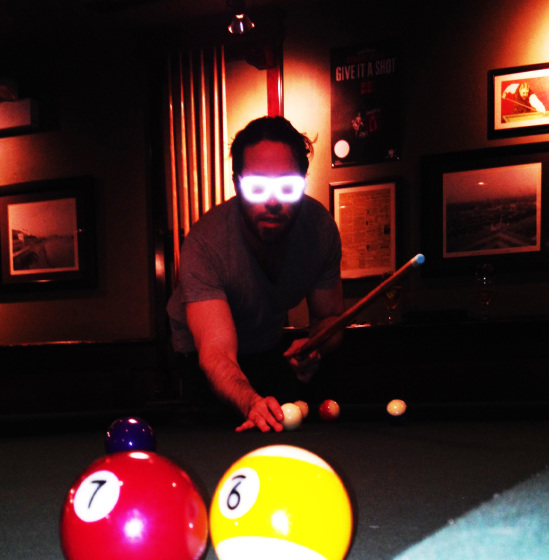 Scott Urban became an object designer when he accidentally broke a pair of his father’s glasses frames. “It all started by necessity,” he says. “Instead of buying new frames, I decided to make a new pair myself.” He’s now been creating, inventing and designing custom eyewear for more than ten years.

What motivates Urban is avoiding the consumerist tendency to shop for new items every time something breaks. It’s deeply engrained in his work ethic, lifestyle and identity. “My mom set that example for us by sewing our clothes and making things herself,” he says. “That taught me that when you want something, you can learn how to make it yourself. If my mom wanted a bench, I would work with wood and learn how to make one for her. It is more fun that way, because I’d rather spend time learning how to make something as I always learn new things throughout the process.”

Early in his career, working with wood became Urban’s material of choice, and he created a set of unique wooden eyewear models. “As I continued to develop my wooden eyewear designs, I started to receive positive feedback from my community and the message of my work spread by word of mouth.” Engaging with his clients one-on-one is an important component in the process of creating each model, Urban says. This ensures that the frame design remains true to the needs and style of each client. “Each pair of frames is designed for a specific person, each client brings part of their personality and style,” he says. However, as the years passed by Urban noticed that nearly every eyewear shop began promoting some sort of wooden frame design. Working with wood to create frames felt creatively outdated. It became clear that it was time to go into uncharted territory.

Enter “Reflectacles.” The vibrant colors of the line (silver, gold, blue, green, orange and red) and versatile design make it a design that works well for every gender and style. And the reflective quality of each pair promotes safety for night joggers and cyclists, as the frames enhance visibility at night by reflecting light back to the direction it came from. The effect is similar to that of an intense glow, a flash of colorful neon light. After experimenting with the first generation of reflective eyewear, Urban introduced an updated version of the Reflectacles line dubbed Reflectacles Ghost. The Ghost model also reflects visible light, but with an added characteristic that may appeal to privacy-minded individuals. Each pair of Reflectacles Ghost reflects infrared light, creating a barrier against surveillance cameras that use infrared technology. The Ghost model creates a blinding silver glare that prevents any facial features of the person wearing the frames to be captured by surveillance cameras.

The theme of privacy against surveillance is something Urban cares about deeply. “Chicago is the most surveilled city in our country,” he says, “and nobody seems to perceive this as a serious matter. When I talk to people about cameras available to other organizations, nobody seems to know or care, for them it is not a big enough of a conversation. I am not approaching the surveillance theme in a political context since I am not an activist, but a creator of objects, but I do believe that personal privacy is important.” The Reflectacles Ghost line is Urban’s designed response to the surveillance problem.

The frames are made out of blocks of cellulose acetate, a type of bio-plastic that is used to create the design. After the manufacturer has produced the frames, Urban applies the silver-colored reflective material for each pair of Reflectacles Ghost. Each pair of Reflectacles is priced at $95 and the Ghost version is running for $125. The importance of quality is imperative for each: “I make sure everything is of the highest quality it can be,” he says. “I am not going to put my name on something I don’t believe in. I like to create things that add value to people and I want those who wear each pair of Reflectacles to love them, and to get a sense that I care about making each pair something special. From hand-signing and screen printing designs on every package, I want the love for what I do to shine through.”