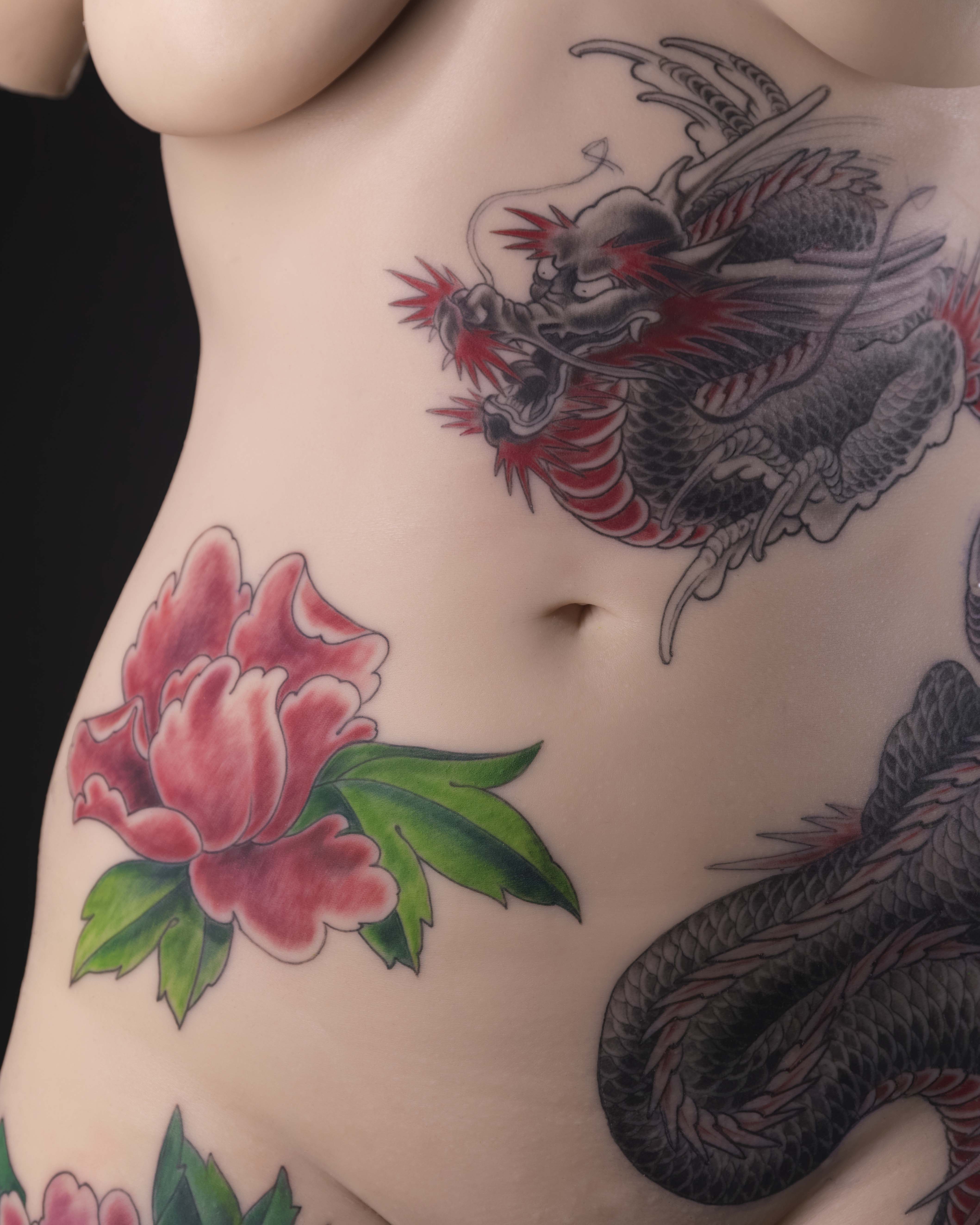 Whang-od Oggay was tattooed when she was a teenager. Each of her arms took one full day to finish and her family paid bundles of rice for it. When her tattoo was completed her father killed a pig to celebrate it. Considered the last mambabatok (traditional Kalinga tattooist from the Butbut tribe) and the oldest tattoo artist in the Philippines, Oggay, born in 1917, is one-hundred years old. People still travel around the world to have her poke their skin. She carves traditional designs inspired by nature and basic geometric shapes with ink composed of a mixture of charcoal and water. The ink is tapped into the skin through a pomelo thorn attached to a bamboo stick. This ancient technique of tattooing is called batok and dates back thousands of years. Traveling deep into the mountains of central Luzon, the largest and most populous island in the Philippines, Oggay’s story is told through a documentary that’s part of the Field Museum’s Tattoo exhibit.

Exploring more than 5,000 years of tattooing tradition and spanning from ancient Egypt to Japan to New Zealand to contemporary L.A., the exhibit showcases a visual history of body art and design practices, ancient tools and objects, and silicone body reproductions inked by some of the most respected artists in the contemporary world. The thousand-year-old timeline is not limited to art and design but also illustrates the cultural and anthropological importance of tattoos.

In ancient times, they were a privilege of headhunters and warriors who protected their villages from the enemy. They have been used to express beliefs, symbolize courage and protection against danger, signify strength, and identify prisoners, sailors and street gang members. They’ve marked humiliation or punishment for women forced into prostitution, tattooed as a sign of servitude. Nazi prisoners were forced to carry serial numbers as a signifier of their loss of identity. Today, tattoo artists work with clients who are far more subdued. As the practice continues to evolve across cultures and time, the designs convey different meanings and ideas that, whether simple or elaborate, are always authentic to the person who wears them.

Scar tattoos were practiced by the Makonde people of Tanzania using a small knife, as black pigment would be applied to the cut. When it healed, a dark scar would appear in its place. Native American Mojave elder women would traditionally tattoo girls when they entered puberty with stripes across their chin—a tradition that led to a good afterlife. In Russian prisons, a tattoo would communicate an inmate’s crime: A skull and crossbones was for murder, a cat for a thief, stars indicated the years spent in prison and the guards would be represented by pigs and wolves. Prostitutes would get a tattoo of a penis. If  a prisoner had a tattoo he didn’t deserve, the others would take it upon themselves to remove it by force.
Knives and needles made out of shark teeth, bones, cactus spines or metal, led to ingenious devices made from assembled materials in prison. Due to the lack of proper equipment and sterile environments, tattooing carried serious health risks. Thomas Edison’s electric stencil pen (1877)  inspired the first electric tattoo machine in 1891. Until then, tattooing made its way in the West on the skin of sailors and explorers. By the end of the nineteenth century, artists across the world were able to exchange ideas, techniques and inspiration.

Leo Zulueta, is known as the “father of modern tribal tattooing.” His style is described as “contemporary tribal” and has heavy Polynesian influences. He studied alongside Don Ed Hardy, a Southern California legend in the tattoo world, who incorporates Japanese tattoo aesthetics and techniques into his work. Zulueta was an apprentice of “Sailor Jerry.” Long before he enlisted in the Navy, Norman “Sailor Jerry” Collins would hand-poke designs as a teenager. It was his adventures across the country and the open seas that shaped him as an artist. Combining his fascination of Eastern aesthetics with folk art and culture, he arrived in Honolulu, Hawaii, the place he decided to call home, opened up his shop and redefined tattooing forever. He would dream of hula girls, snakes, skulls and flowers alongside sinking pirate ships with banners wrapped around their sails—witty slogans and sharp symbolism—and the world would write him letters—colorful life stories that would match the bright colors and pin-up style of his Hawaiian-inspired designs. 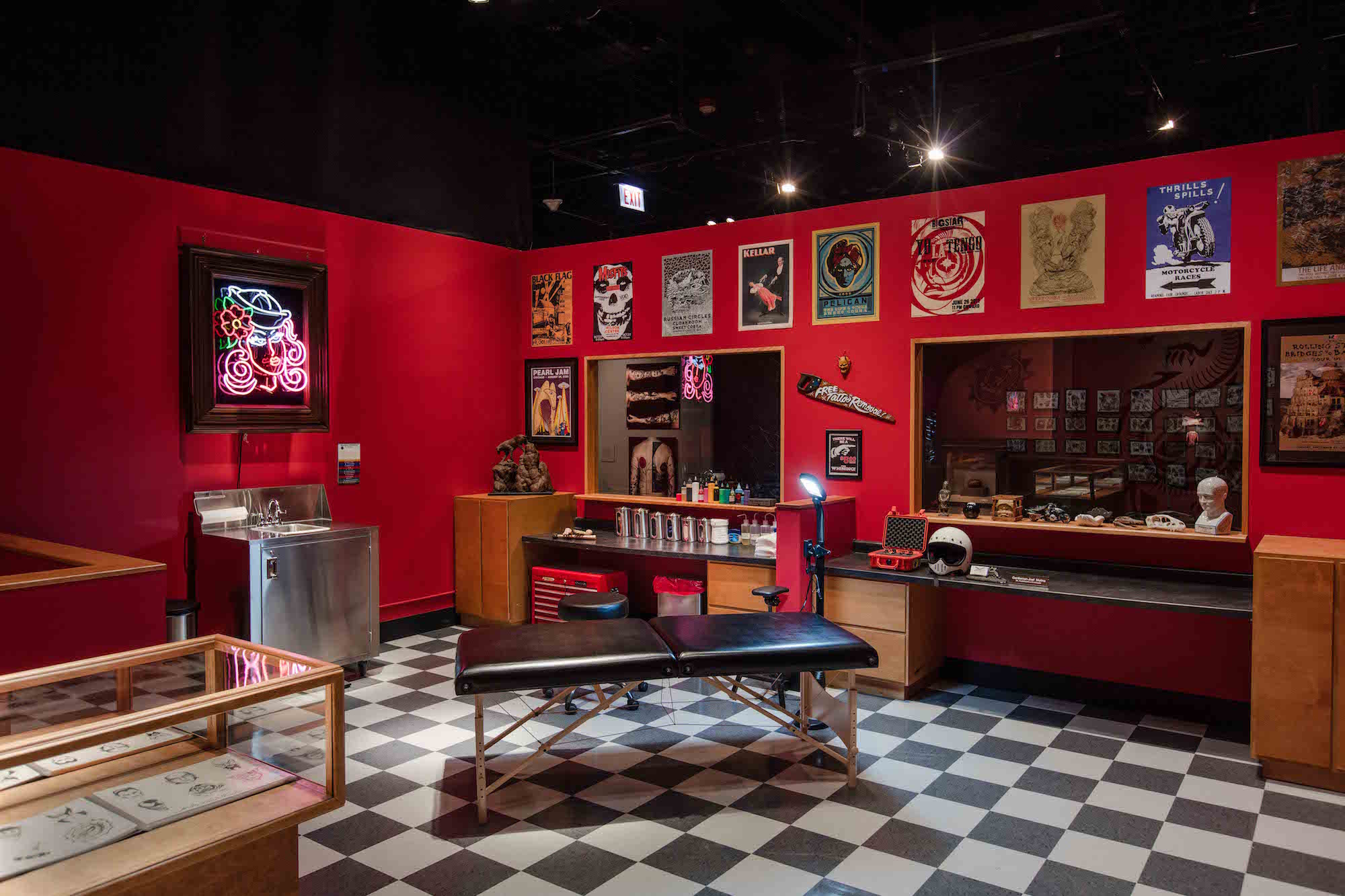 The Field’s comprehensive exhibition wraps up in an immersive environment: a working tattoo shop featuring some of the most sought-after local artists. Tattooing is no longer quite the symbol of rebellion and subculture it once was, but as the exhibit shows, the ritual has always been an undeniable part of self-expression coming to life on human skin.

Through April 30 at the Field Museum, 1400 South Lake Shore Drive