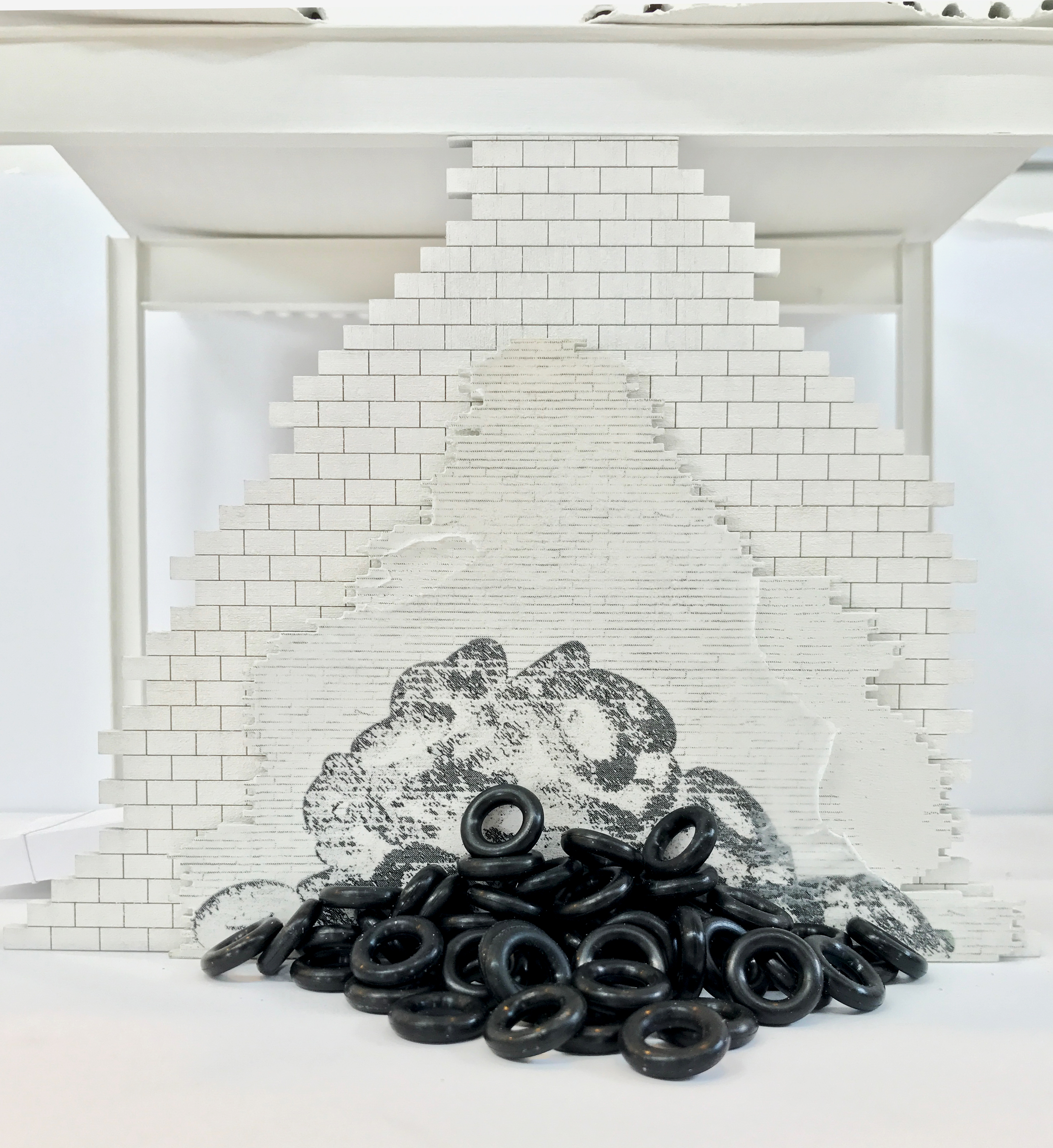 A collaborative comprised of architects Thom Moran, Ellie Abrons, Adam Fure and Meredith Miller, the Ann-Arbor based group  T+E+A+M will present “Ghostbox” for the Biennial, constructing a “domestic scene” in an (as of this writing) undisclosed abandoned “big-box” location. As with much of their past work, this reduction of architectural elements to their base unitary value reflects a stripping back and repurposing recurrent throughout much of the group’s work, often related to states of media. Taking on this fundamental unit of traditional built environments, the box or block, they simultaneously evoke the bits required to build electronic images and present a through line as to the teleological desire of the object in its purest, most perfected revitalized form.

It’s “part of an ongoing effort to rethink building construction through the unexpected reuse of disused materials and structures,” says Fure. “T+E+A+M has coined the term ‘reassembly’ to describe an approach to building distinct from other forms of architectural recovery such as renovation, adaptive reuse, preservation or restoration. In reassembly, building components are taken apart, moved around, piled up and mixed with new construction to create alternative uses. This approach views a building’s materiality as a matter-of-fact, while stripping away the assumptions commonly associated with disused properties.”

As a concept, reassembly has its roots in the rise of the technological era. Prior to the arrival of personal computers, of course, plug-and-play consoles used basic image blocks to create entire worlds, as does Swedish-based company Mojang today, whose Minecraft has swept up an entire generation in a virtuality fully customizable by its users, brick by brick. It also recalls, as noted in a recent New York Times article on the history of block “construction-play,” that Danish landscape architect Carl Theodor Sorenson suggested it when he “urged that areas in cities ruined by World War II be turned into ‘junk playgrounds,’ where children would be given pickaxes, hammers and saws and allowed to shape the detritus into a new civilization, at child scale.”

Bottling this sense of play amplified to the domain of creative reuse, “Ghostbox” reflects the obsession with the base integer of T+E+A+M’s recent projects, including their proposal to rebuild Detroit’s Packard Plant, singled out as an icon of Detroit’s blight. Resulting in an at-times surreal, nearly alien landscape of pulverized rock, brick and other construction materials, the reinvented structures take the Modernist ideals of Mies to a previously unrealized extreme of not only baring the structure previously hidden behind the concrete and sculpted facades of previous eras, but here also gutting those selfsame interiors when they have fallen to ruin and repurposing that ruin in a Postmodernist revitalization. It’s an approach they think syncs well with the art-directorial vision for this year’s Biennial. “The overall Biennial theme of ‘Make New History’ has been broken down into sub-themes and T+E+A+M has been asked to reflect upon ‘Material History’ in relation to our work,” explains Fure. “Materials, both as physical artifacts and a form visual currency, embody cultural narratives that become fixed over time. To that end, we work on both materials and their images, in order to change these narratives and align materiality with new histories and cultures.”

“To present this idea in the rich historical context of Chicago is an honor and a privilege,” Fure says. (Michael Workman)