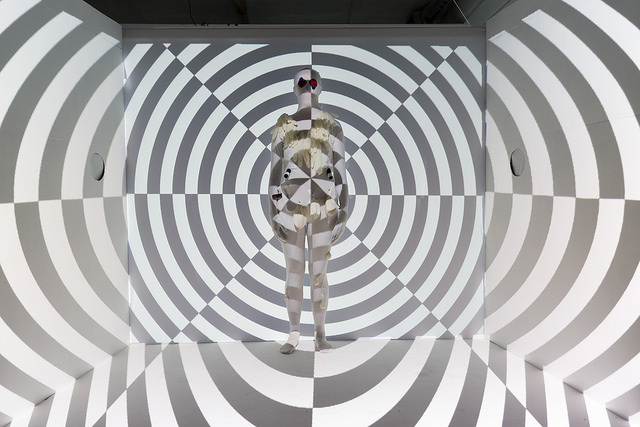 Headed up by founder and executive director Mark Allen, the Los Angeles-based Machine Project is a little different from the majority of architecture firms and artists presenting at this year’s Biennial. Centrally manifested as a dynamic Echo Park neighborhood storefront-gallery space, Allen and company organize events, performances and exhibitions, a practice that should transfer well to the performances they’ve organized to take place at the Chicago Cultural Center. “Collaborating with artists to produce new work that responds to the physical and psychic nature of a space, and considers historical and cultural frameworks, has always been central to our mission at Machine Project,” explains Allen. “We feel our contribution adds elements related to the generating of ideas and conceptual forms that may or may not lead to architectural production, but certainly exist as thought modalities in the artistic and creative process that might contribute to that outcome.”

First among them is Mary Fagot, who will revise her 2017 performance, which premiered as a part of the gallery’s “Panopticonathon Streetview.” In a video of one iteration of the performance, a metallic curtain is raised to reveal Fagot, outfitted head to toe in white stretch fabric with red teardrop-shaped eyes and a necklace of white surgical gloves. She stands at the center of a black-and-white-checkered video projection over herself, her backdrop and surrounding walls, the whole space awhirl as the kaleidoscopic inner and outer wheels of the projection graphics turn in contrapuntal directions. Music plays. A hole opens in the wall through which a gloved hand proffers a hose; attaching it to a line in her stretch-fabric suit, air pumped through the tube inflates a number of the surgical gloves strung around her neck. Hands pop in and out of the holes, inflating more gloves, grasping after open air as Fagot lowers a white papier-mâché  ball over her head, and dances freely. Crowds gather. Motorcycles pass along the sidewalk in front of the storefront, lights flashing. White balls are dropped into the space from above; the metallic curtain is once again lowered.

Arcades Project Blimps and The Material-Cycle-Gift project are collaborative in their approach to investigating space and materials. A series of small white-skinned blimps will be launched that patrol around the space, broadcasting reading of sections from Walter Benjamin’s Arcades Project, with texts chosen “by the Johnston Marklee team and collected from the artists and architects participating in the Biennial.” For the latter, explains Allen, “using the lake at Garfield Park as a final presentation location, we will work with the Biennial team and the artists through the run of the show to identify materials and pieces that might be appropriate to recycle into a final piece. This final piece will be developed in partnership with local artists, perhaps school or community groups and will ultimately be presented on the lake, perhaps on a raft, and documented as a final material piece from the show.” Plans will be on display as the work transitions over time until, eventually, when presented in its final form, the project’s completion will be marked with a performance by experimental vocalist Carmina Escobar.

Machine Project’s two final performances are almost entirely about sound: Kamau Patton, teaching a class at SAIC this year on experimental spatial acoustics, will work with his students and the gallery to present a project on the space of the school. And finally, Sara Roberts will present Readers Chorus, a series of experiments in the use of “timbral combinations, rhythms and the spatialization of voices” in Preston Bradley Hall that visitors will be led through by tour guides.

All of these projects, according to Allen, point up and respond to growing trends in theory that he and his team believe are necessarily rooted in such psychological approaches to architectural design principles. “We see a much stronger focus on engagement and public use. Considering design and architecture from a much more authentic user perspective. Our work at Machine Project is firmly rooted in this dialogue and has always considered proposing new, alternative and experimental ways of presenting to and engaging with art audiences.” (Michael Workman)

Stay inside with Newcity – you can subscribe for monthly deliveryhere.
+