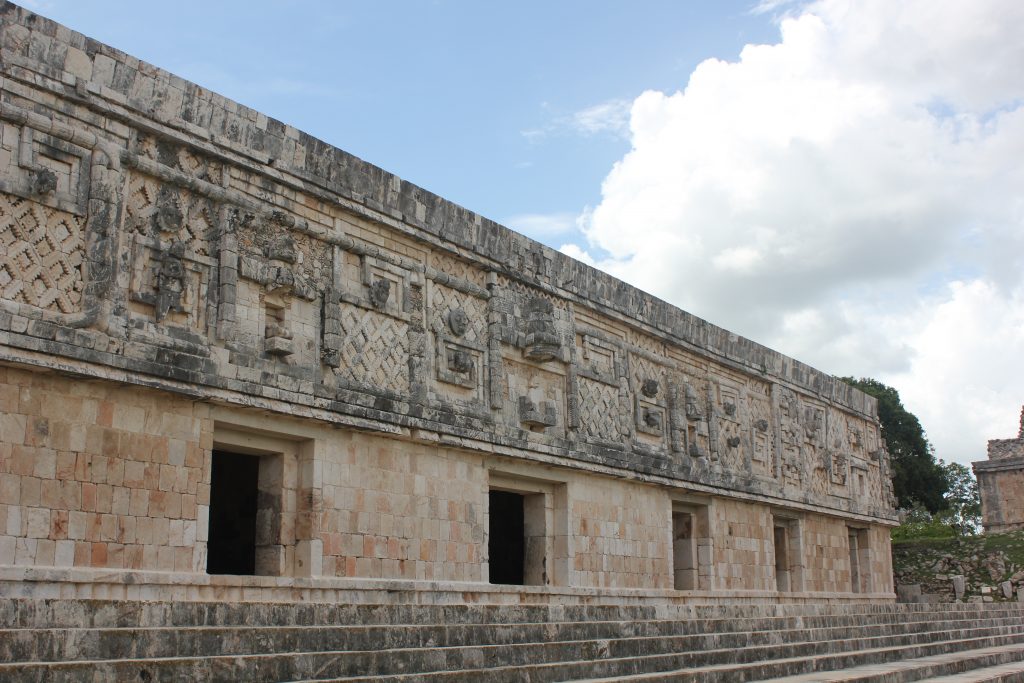 Frank Lloyd Wright’s Prairie School of architecture has roots in buildings constructed centuries ago by the ancient Maya in what are now the countries of Mexico, Guatemala, Belize and Honduras.

Here’s how that happened.

In the Village of Oak Park, right outside Chicago, Wright designed his home and studio, as well as over two dozen other structures. Wright’s influence is undeniable, and you can see the signifiers of his style all over the village. Walking along Pleasant Street in Oak Park, near the corner of Forest Avenue, you’ll pass a somewhat anonymous mid-century yellow and brown brick apartment complex, relatively small (maybe a dozen units) and looking a lot like buildings you find all over the western suburbs. Like many of those humble brick apartment buildings, there’s a decorative panel of cast concrete mounted on a street-facing wall. What makes this panel different is that the imagery is distinctly Mayan, consisting of small square lozenges, called “textile blocks,” containing Mayan-looking glyphs, much like the square inserts that line exterior walls of Mayan buildings built before 1,000 CE. 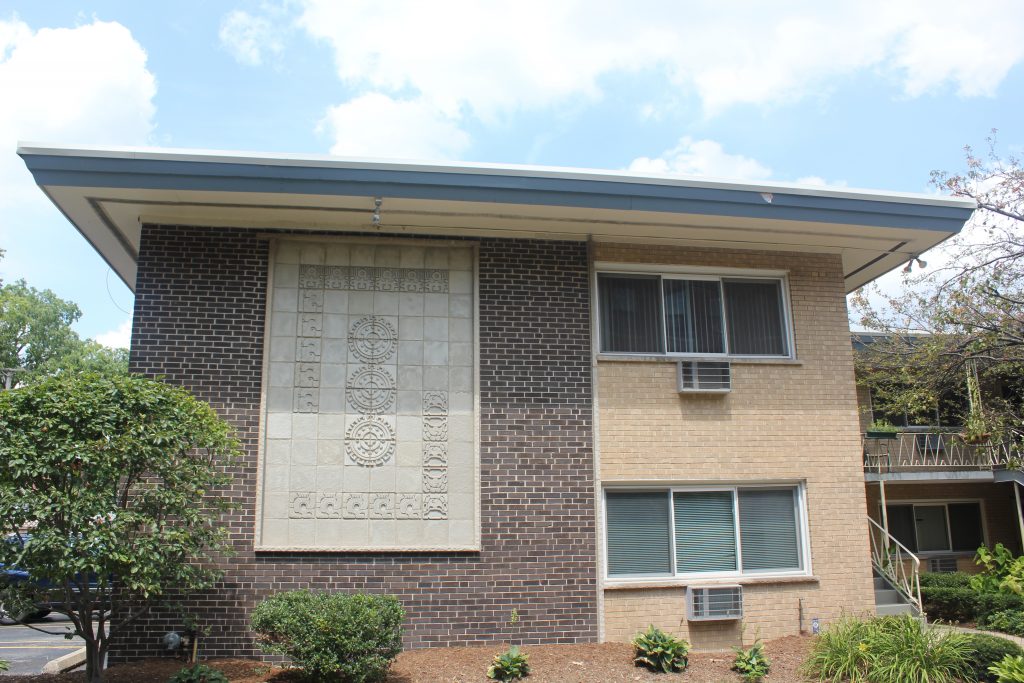 Though Wright is indelibly identified with the Prairie School of architecture, he also briefly designed in Mayan Revival style. This little apartment complex in Oak Park reflects elements of that style without being a full-fledged example of that movement.

Pre-Columbian Architecture Comes to Chicago
Mayan civilization flourished in Mexico for millennia before Columbus arrived. By the time the Europe invasion kicked off big time, most major Mayan cities were abandoned and largely forgotten. Forgotten, that is, until 1843, when John Lloyd Stephens visited Yucatan (now the middle state on the Mexican peninsula of the same name, flanked by the states of Campeche and Quintana Roo). Based on several visits to the peninsula, Stephens wrote his landmark book, “Incidents of Travel in Yucatan,” illustrated with Frederick Catherwood’s meticulous drawings of the Mayan ruins. Stephens and Catherwood sparked the imagination of the world, bringing international attention to the remains of a brilliant, long-gone civilization, built by some of the earliest known people in the Americas. These people had been previously assumed—by “scholars”—to be incapable of creating such magnificence. Similarly, it wasn’t until the 1960s that Mayan hieroglyphics were understood as more than just random hieroglyphics, but rather a language, with a lexicon, syntax and grammar—exactly what you’d expect from an advanced civilization.

For over thirty years, Stephens worked in conjunction with the Field Museum of Chicago to uncover and document the architectural treasures left behind by the Maya and dating back to around 2000 BC. Some of these ancient ruins, including the so-called Nunnery at Uxmal, a major archaeological zone in Yucatan, were cast in plaster by Stephens and presented at 1893’s World’s Columbian Exposition. The Nunnery’s plaster cast was located at 65th and Lake Michigan, at the highest point in the fairgrounds, making it visible to most who visited the Exposition.

Frank Lloyd Wright arrived in Chicago shortly before the exposition, to which he and his employer, architect Louis Sullivan, contributed a monumental “golden doorway” for the Transportation Building. During his many visits to the fair, Wright would have seen Stephens’ casts and photographs of Mayan buildings, which would have appealed to him much more poignantly than the European Neoclassical style that dominated other buildings at the exposition, and which he and Sullivan heartily disdained.

Mayan Revival
The Mayan Revival, an architectural movement in which Wright and other architects of his time played key roles, is still on display at landmark residences like the Hollyhock House in Los Angeles, which borrows directly from the ruins at Uxmal, and the nearby and equally spectacular Ennis House. Imposingly dramatic, and used as a setting in “Blade Runner” as well as “House on Haunted Hill,” the huge Ennis House is covered with textile blocks, much like those on that small apartment building in Oak Park, a signature of the Mayan Revival style.

The Mayan Revival, most popular during the 1920s and 1930s, intersected with the Art Deco movement. There are several buildings, like the Mayan Theater in Denver and the Fisher Building in Detroit, that reflect both the iconography and ornamentation of ancient Mayan buildings and the modernist sleek, aerodynamic lines of Art Deco.

Wright was looking to develop a truly American architecture, in contrast to the then-popular Eurocentric Neoclassical style. He seemed to find inspiration at the Columbian Exposition.

Later, in “The Future of Architecture,” Wright wrote that in Mayan architecture, “we see a grand simplicity and concept of form. Probably it is greater elemental architecture than anything remaining on record.”

The Mayan Revival style wavers between elemental grandeur and a certain kitschy charm. What’s most intriguing, however, is how an indigenous Mesoamerican civilization created an architectural style that influenced what we now understand to be the Midwestern-born Prairie School style of architecture. This style of architecture was shaped by Wright’s exposure, at theColumbian Exposition, to the fundamental principles of this ancient and indigenous architecture. 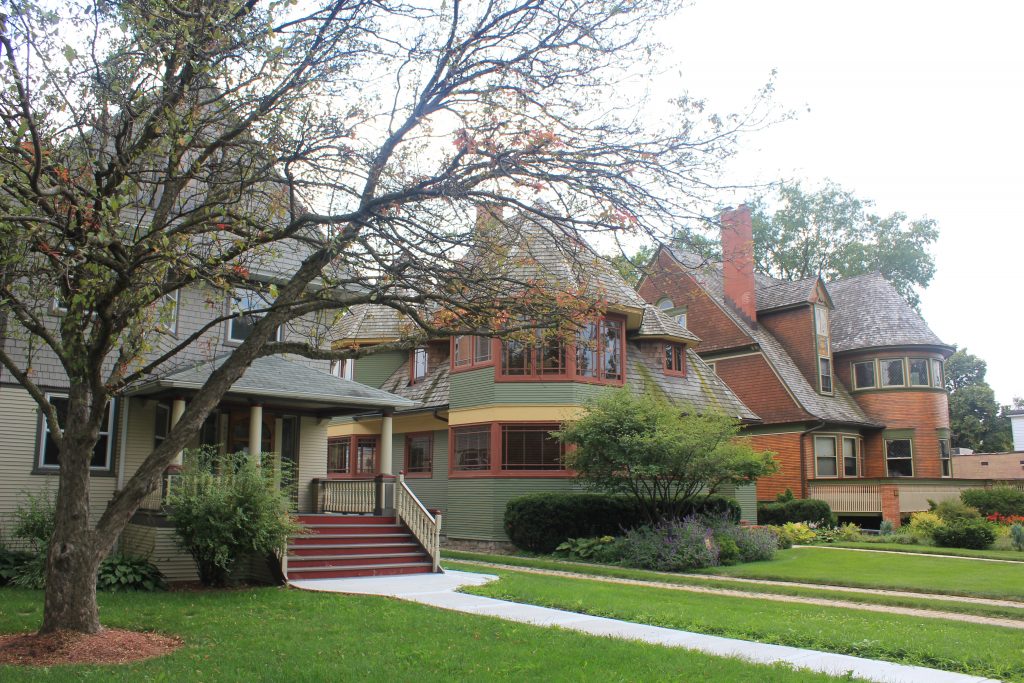 Mayan Influences on Wright’s Oak Park Buildings
The key elements of some of Wright’s best-known buildings, the architectural features he used consistently throughout his career, had their genesis in Mayan architecture. These elements include:

Not all of Wright buildings reflect these features, but taken collectively, these seem the most commonly used Mayan-like elements in Wright’s Prairie School style of architecture.

Horizontal lines
Wright was looking for a style of his own, an American style. It seems that after seeing the Uxmal exhibit at the Columbian Exposition, Wright was influenced to go more horizontal. Horizontality was characteristic of Uxmal structures, such as the Nunnery and the House of the Governor (plaster casts and photographs of the structures were on display at the Exposition). Both these Mayan masterpieces are stretched out, single-story buildings, unlike the more vertically oriented “bootleg” buildings. The horizontality of both Mayan and Wrightean structures is reinforced with banding, which stops the eye from moving upward and persuades it to trace along the length of the building, parallel to the earth.

Starting in 1892, before the opening of the Columbian Exposition, Wright designed three “bootleg” homes on Chicago Avenue in Oak Park. They’re called “bootleg” because Wright was forbidden by contract to take on such assignments while employed at Adler & Sullivan (he was eventually fired for this transgression). These “bootleg” structures are generally in the Queen Anne style. Wright was notoriously unhappy with such work, writing in his autobiography, “What was the matter with this typical American house? Well, just for an honest beginning, it lied about everything. It had no sense of unity at all nor any such sense of space.”

Wright’s work after the Columbian Exposition is marked by a strict horizontality; you see this aggressively longitudinal orientation of Oak Park residences like the Laura Gale House, which has massive cantilevered porches that create parallel bands on the first and second floors. This residence was a direct precursor of Fallingwater in Pennsylvania, one of Wright’s most recognizable works. Strong horizontals are also found in many other Oak Park structures, including the Frank Wright Thomas House, which reinforces the horizontal with a row of banded windows. 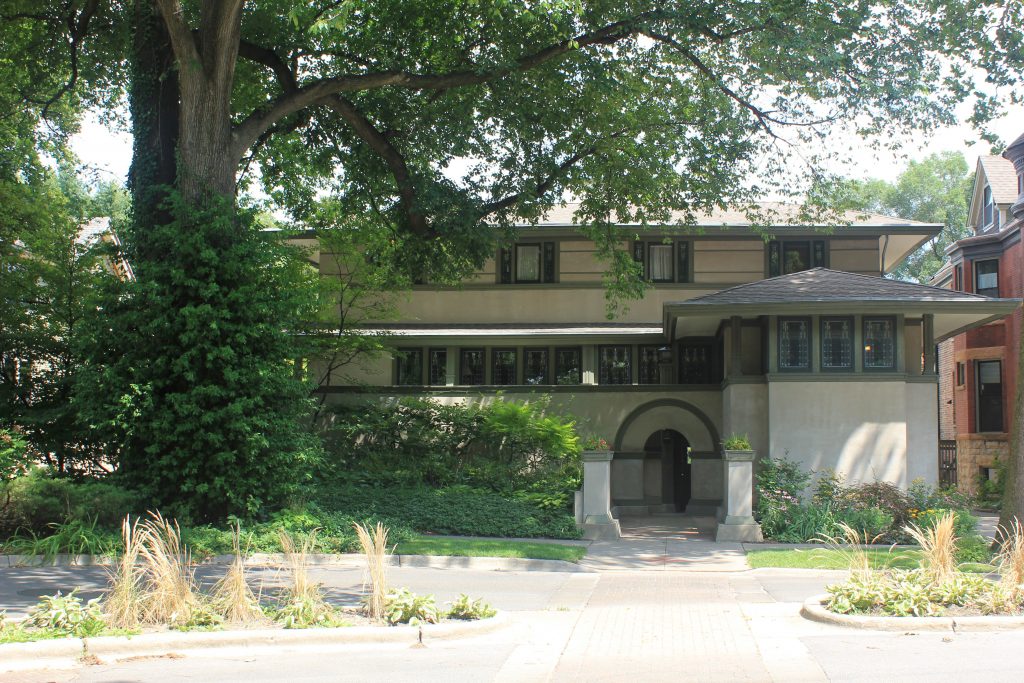 Flat roofs
The Yucatan region of Mexico is perhaps most known for its pyramid structures, and the major archeological zones such as Uxmal and Chichen Itza all have stunning pyramids. Most Mayan structures are not pyramidal but rather rectangular, and most of the roofs on these structures are flat. Uxmal’s Nunnery is a long, level building, as is the House of the Governor. Yucatan receives inconsistent and sparse precipitation, so a level roof is no problem: there’s such limited rainfall that water will rarely pool upon the roof. Moreover, compared to a steeped roof, a flat roof, supported by beams laid wall-to-wall, is easier to support and requires less wood (an increasingly rare commodity in the later Mayan world).

The Queen Anne and other Victorian styles, which Wright practiced early in his career, favor steeped roofs. Later works like the Laura Gale House have flat roofs, and in the not infrequently moist Midwest, leaky roofs are a common problem in Wright’s buildings. Still, the flat roofs push back against the vertical tendencies of any above-ground building, and the horizontal energy is reinforced by Wright’s use of banding, cantilevered roofs and other visual cues. 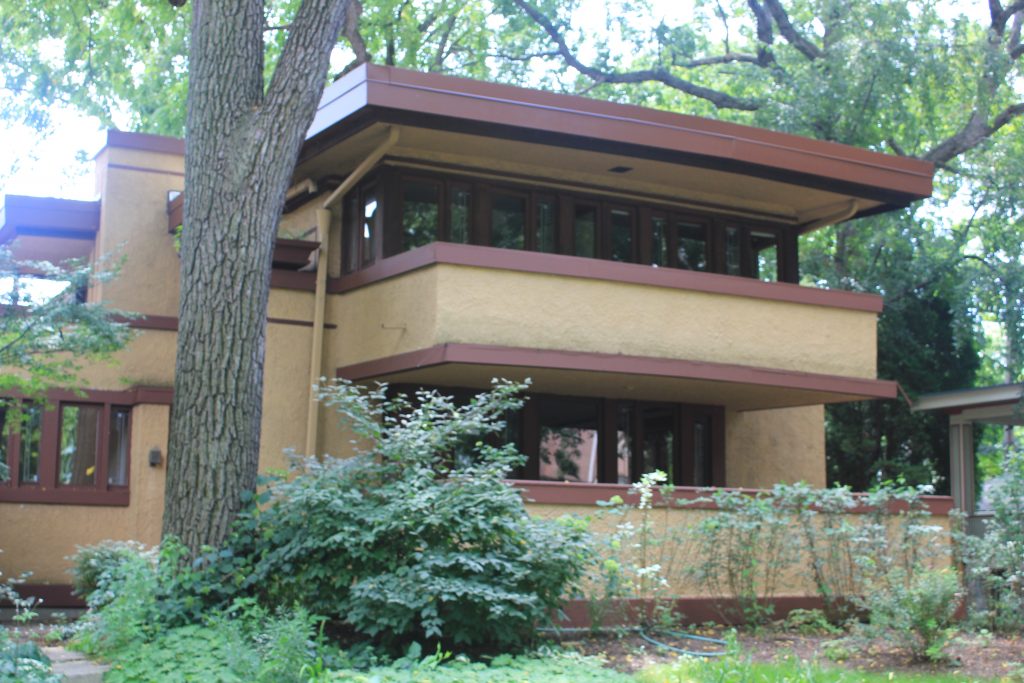 Stucco
All that remains at Yucatan’s former Mayan cities are barren stone structures, stripped of the brilliantly colorful stucco exteriors they would have had during the Maya’s cultural moment. Stucco does not do well in humid environments, and in the Yucatecan jungles, the stuff just washed away.

Stucco is similarly not an ideal building material for the Midwest; it’s more suited to the drier Southwest. Still, after the Columbian Exposition, Wright moved away from the wooden panels of the “bootleg” houses and started using stucco on many of his buildings in Oak Park and elsewhere.

A close, organic connection to the land
The Nunnery reconstruction at the Columbian Exposition is a good example of how Mayan architecture was designed to hug the earth. The Maya built their cities to last; the pyramid is a very stable structure, and a low building is equally solid, immovable, less likely to crumble into the dust of time (that’s why so many Yucatecan buildings, despite the ever-encroaching jungle, have been able to endure for centuries).

The earthbound aspect of Wright’s architecture is reinforced by flat roofs and horizontal lines, and the organic connection to the land is probably most obvious in his works that are set in a more “natural” environment, such as Fallingwater. The flat feel of his Prairie School buildings mirror the flat lands of the Midwest, and it reflects a connectedness to the land that was not present in most of the other architecture at the Columbian Exposition. The earthbound aspect of Mayan architecture, much of which was built on lands as flat as any in the Midwest, clearly struck a chord in Wright. 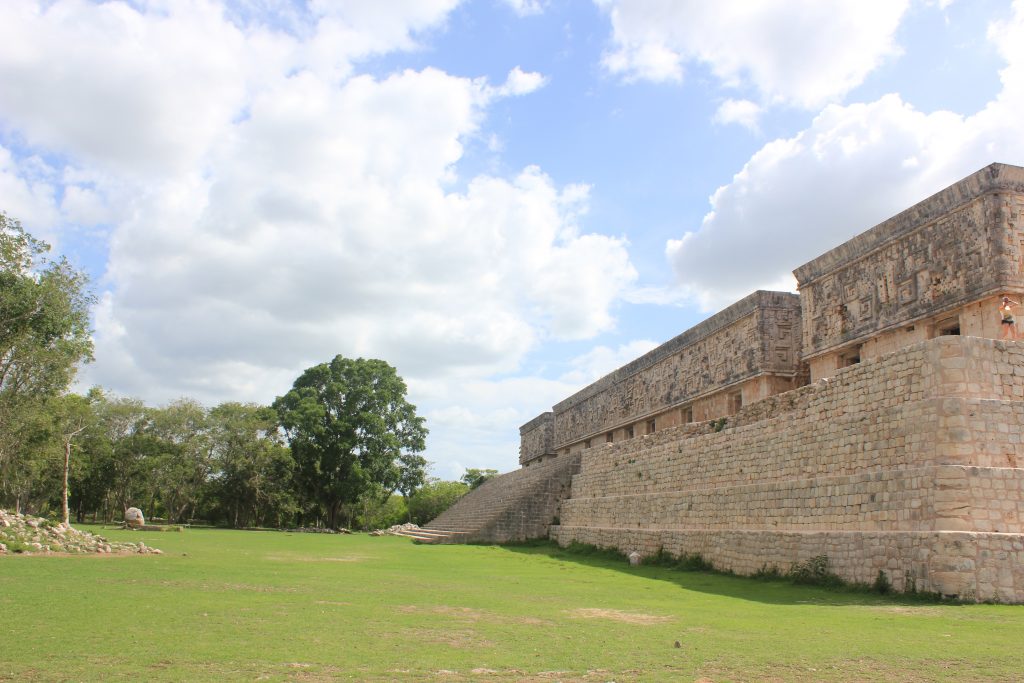 Rectangular massing
Much Mayan architecture is based on the rectangle. There are, of course, the famous pyramids and some circular structures (like the observatories at Chichen Itza and Mayapan), but most of Mayan civic and religious buildings are rectangular as are many of Frank Lloyd Wright’s buildings in the early twentieth century.

The Arthur B. Heurtley House in Oak Park reflects the solid spaces and rectangular massing of the Nunnery and House of the Governor at Uxmal, and the horizontal bands in the solid stone walls reinforce the longitudinal aspect of the building. 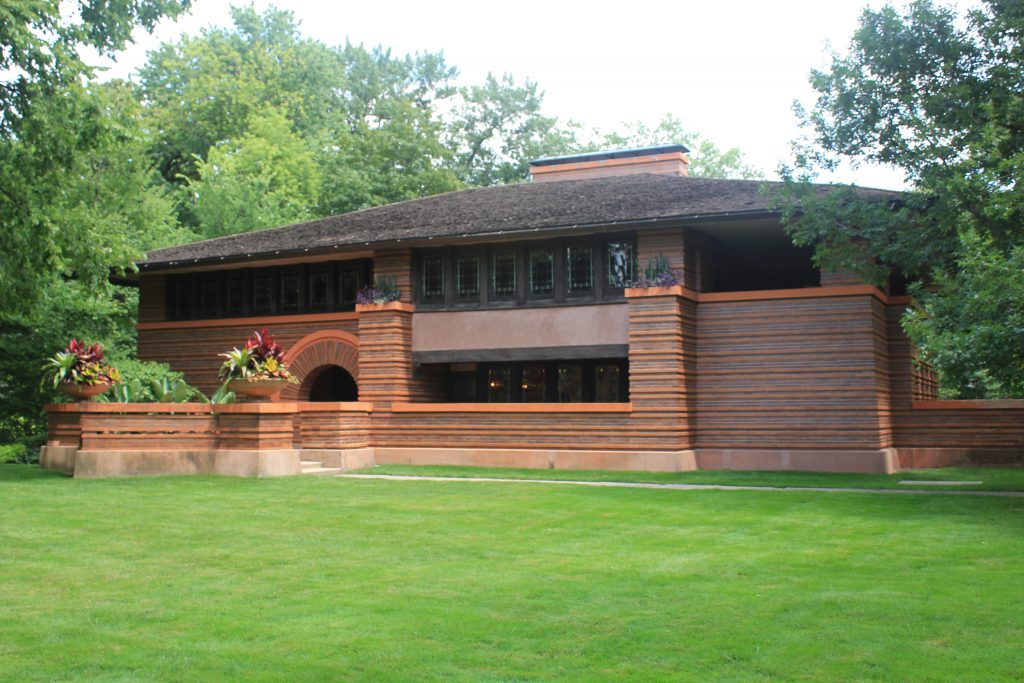 There is, however, perhaps no existing Wright-designed Oak Park building that’s better known than the massive, and recently restored, Unity Temple, a series of big rectangles upon big rectangles, with many horizontal lines and flat roofs. This rectangular massing gives so many Mayan and Wright structures their undeniable monumentality and distinct sense of space. For those elements in Wright’s work, we can thank the ancient Maya, whose achievements, ironically, were brought to Wright’s attention at an exposition that celebrated the anniversary of the 1492 invasion. 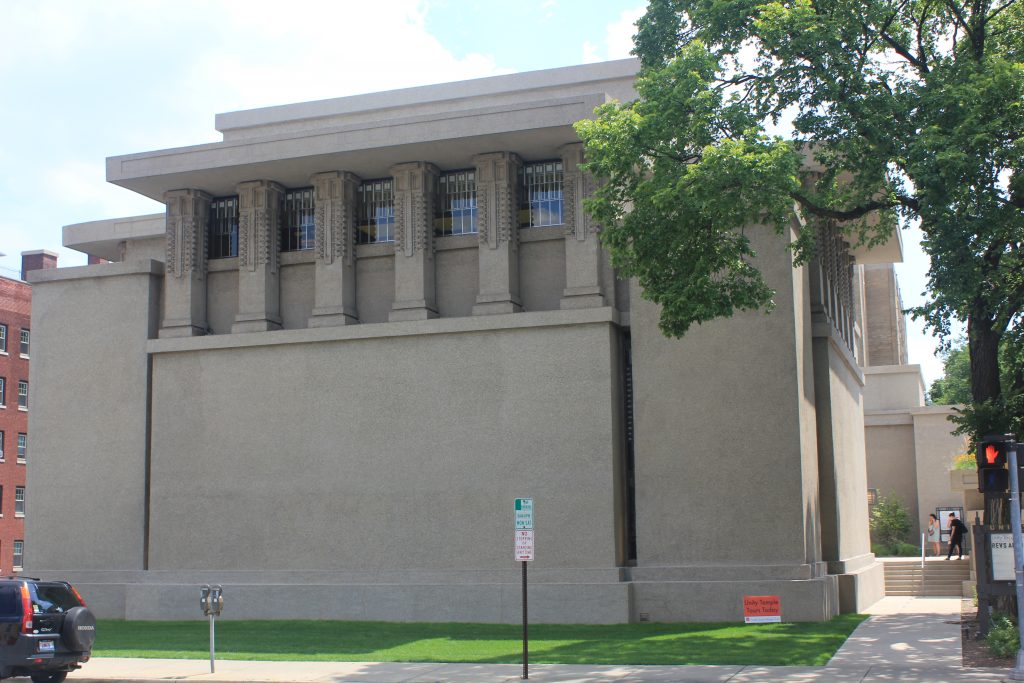