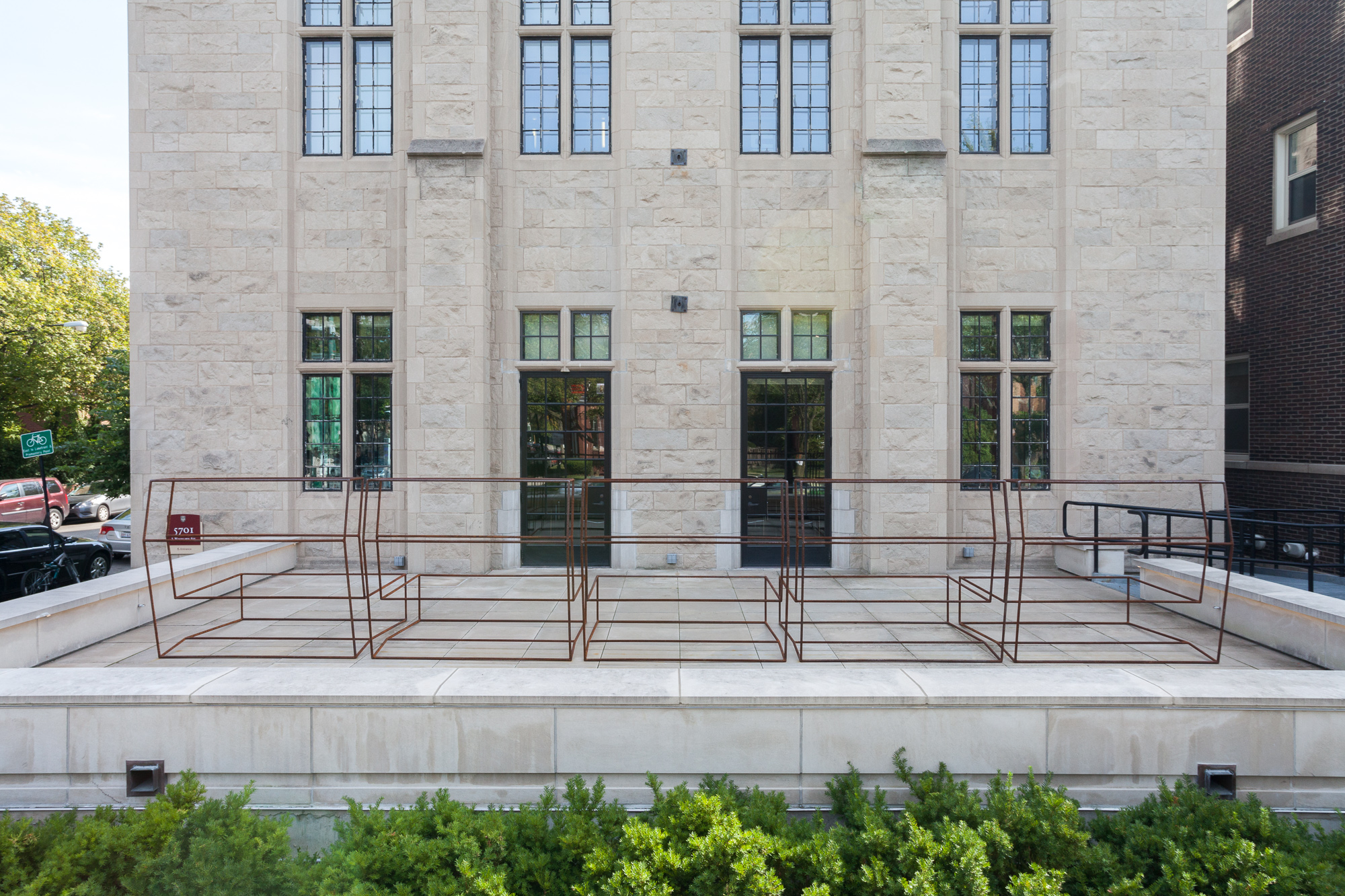 Cuba, March 1953. The new Havana embassy—a much-anticipated building meant to portray the United States as “an open, dynamic and cooperative modern country”—opens its doors. Overlooking the Gulf of Mexico on the Malecón through its reflective glass façade, the Modernist-Brutalist-style building, designed by New York firm Harrison & Abramovitz, seemed to have it all: Italian-imported travertine, French furnishings, Belgian steel and British office partitions. Not only would the new building change the Cuban capital’s skyline forever, but it would also showcase the United States as a dynamic, prosperous, progressive, post-World War II superpower. High praise in the architectural press followed. In fact, the building was so well-received that the Museum of Modern Art included it in an exhibition of new U.S. diplomatic architecture later that year. But it wouldn’t last long.

The building’s climate-control issues—a ventilation system unable to tame the tropical sun and aluminum windows susceptible to the country’s frequent heavy downpours—were the least of the embassy’s problems. Within eight years, in January 1961, President Eisenhower broke off relations with the government of Fidel Castro over Cuban accusations that the embassy was a U.S. espionage base. Its doors closed. Sixteen years of political turmoil and lengthy negotiations later, the building would become home to the newly launched U.S. Interests Section (USINT) under the formal protection of Switzerland, as part of President Carter’s efforts to improve ties with Cuba—a mission finally accomplished in July 2015 under President Obama. The U.S. flag was raised again and, regaining embassy status, the aging architectural landmark came back to life. 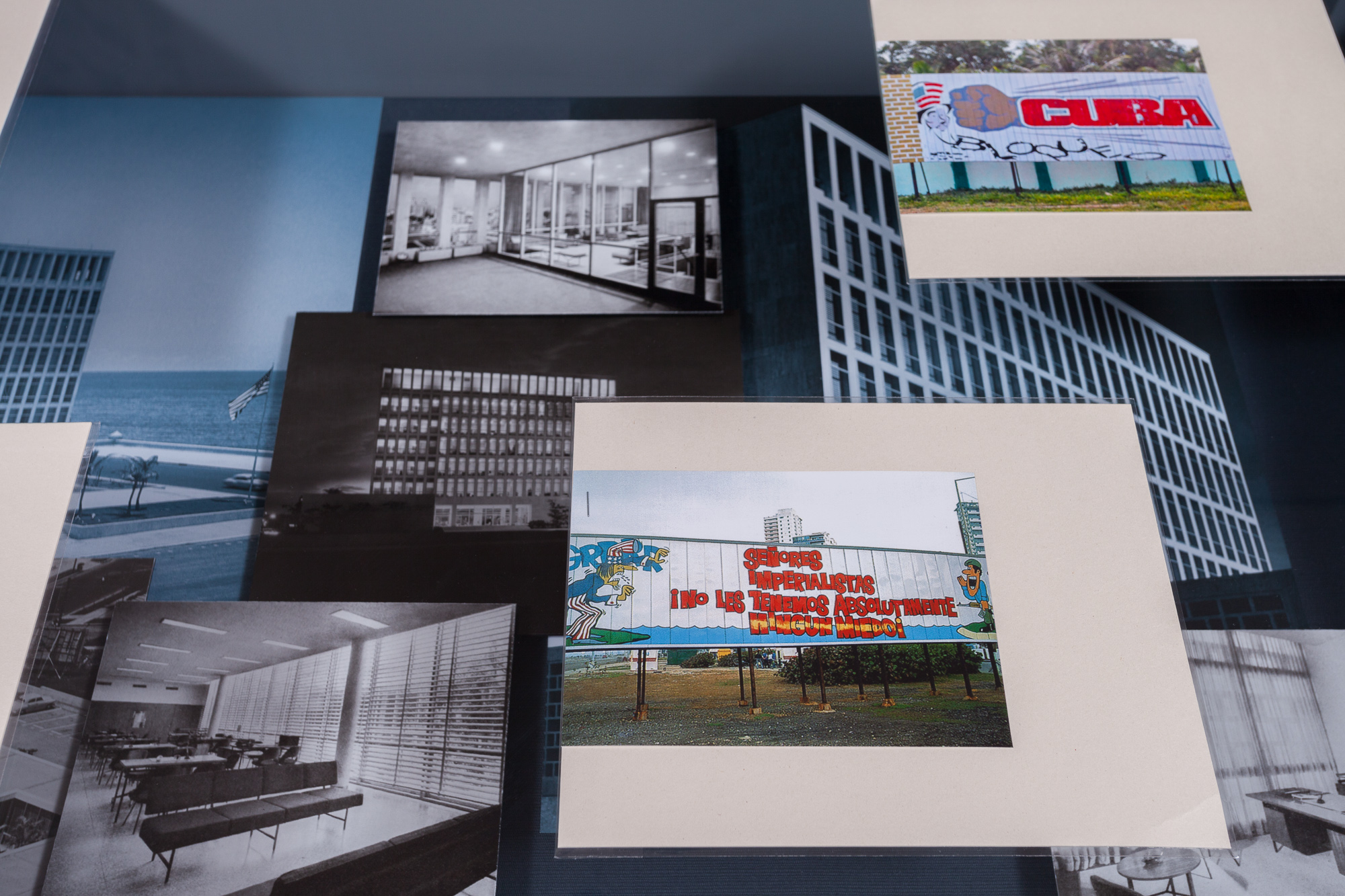 But it wasn’t all smooth sailing: In 2006, under President Bush, the State Department installed a scrolling billboard to broadcast human rights messaging that included quotes by Martin Luther King, Jr. and Abraham Lincoln and others. In response, Cuba renamed the area in front of the building Anti-Imperialist Plaza, creating a “battlefield” of political posters, and over a hundred black flags raised high enough to block the view of the electronic sign. The building once again became the symbol of an era.

Taking into consideration the U.S.-Cuba diplomatic relations—past, present and future, as with the election of President Trump, they’re uncertain once more—what the building itself was initially built to represent, and how this has changed over the years, makes one wonder: How can a structure politically and aesthetically represent the times in which it is built, but at the same time remain relevant across time, political parties and regimes? What architecture best represents a country? And is architecture, after all, destined to create structures that are meant to take on lives of their own?

All those questions are to be explored in Terence Gower’s latest project, “Havana Case Study,” on view at the Neubauer Collegium in the light of the second Chicago Architecture Biennial. Following “Baghdad Case Study,” the exhibition is the second in an ongoing series of installations by the artist to use diplomatic architecture—and more specifically U.S. embassy buildings—as case studies to examine U.S. international relations. The New York-based Canadian artist is no stranger to buildings with complicated diplomatic histories. “I’ve been interested in U.S. public architecture for a long time, especially large postwar government-funded projects, educational and cultural institutions,” he says. “I’ll usually start the research without a clear idea what the artwork will be, or if there will even be an artwork at the end—the U.S. embassy research was one such project with no definite endpoint. I first visited Havana in 2003 [to participate in the Biennial] then went back for several months in 2014,” he adds, “so the theme of the modern embassy as a site for diplomatic drama developed by itself and is now living its own life.” 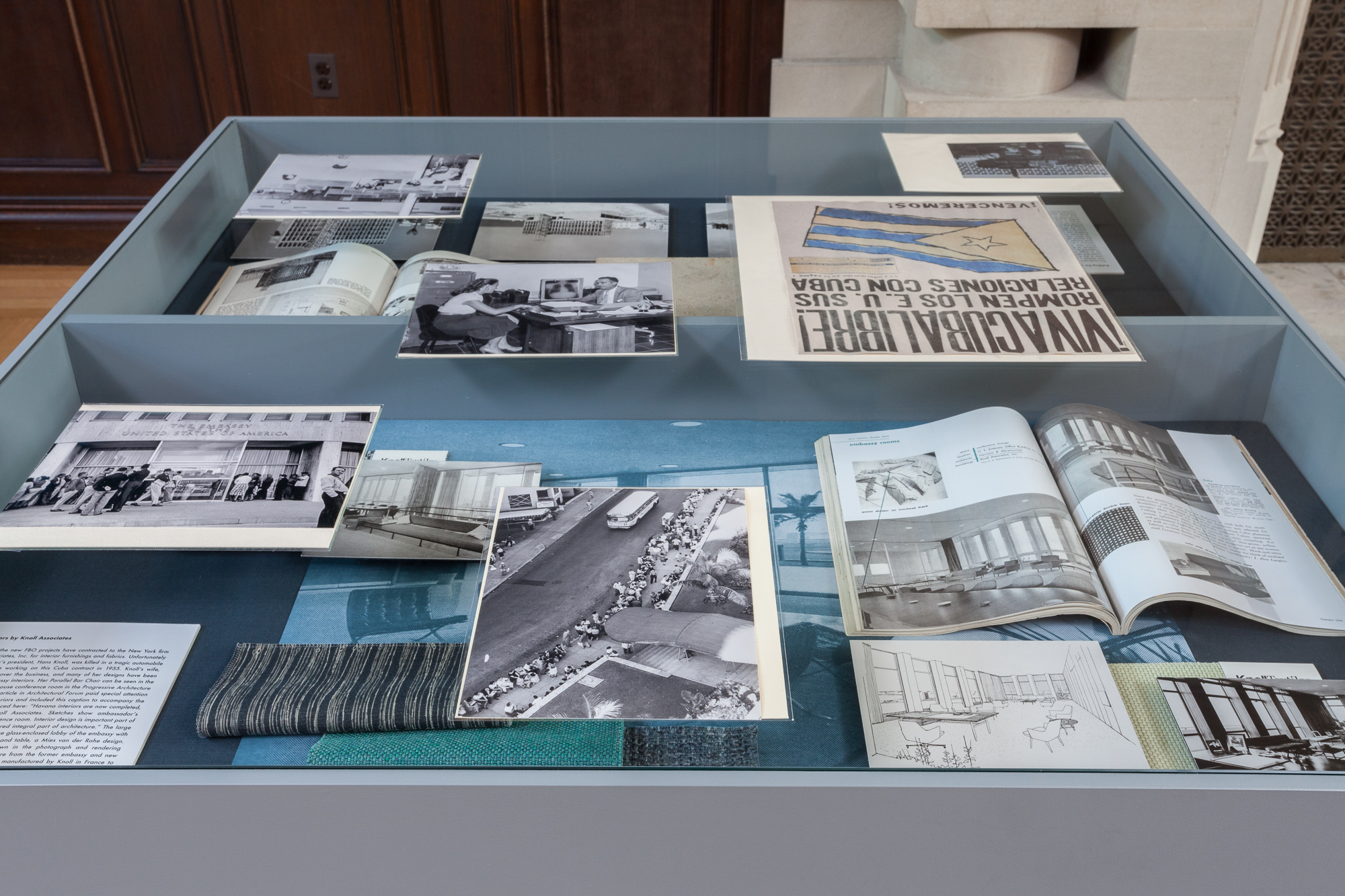 Based on extensive research in both Havana and U.S. archives, Gower brings together a mixed-media installation inside and outside the gallery space. Glass, brass, cardboard, Mylar, photographs and digital prints, all come together—pieces to a puzzle that spans decades of architecture, urban design and foreign-policy history—in a comprehensive exhibition about America’s southern neighbors and the relations between two countries. 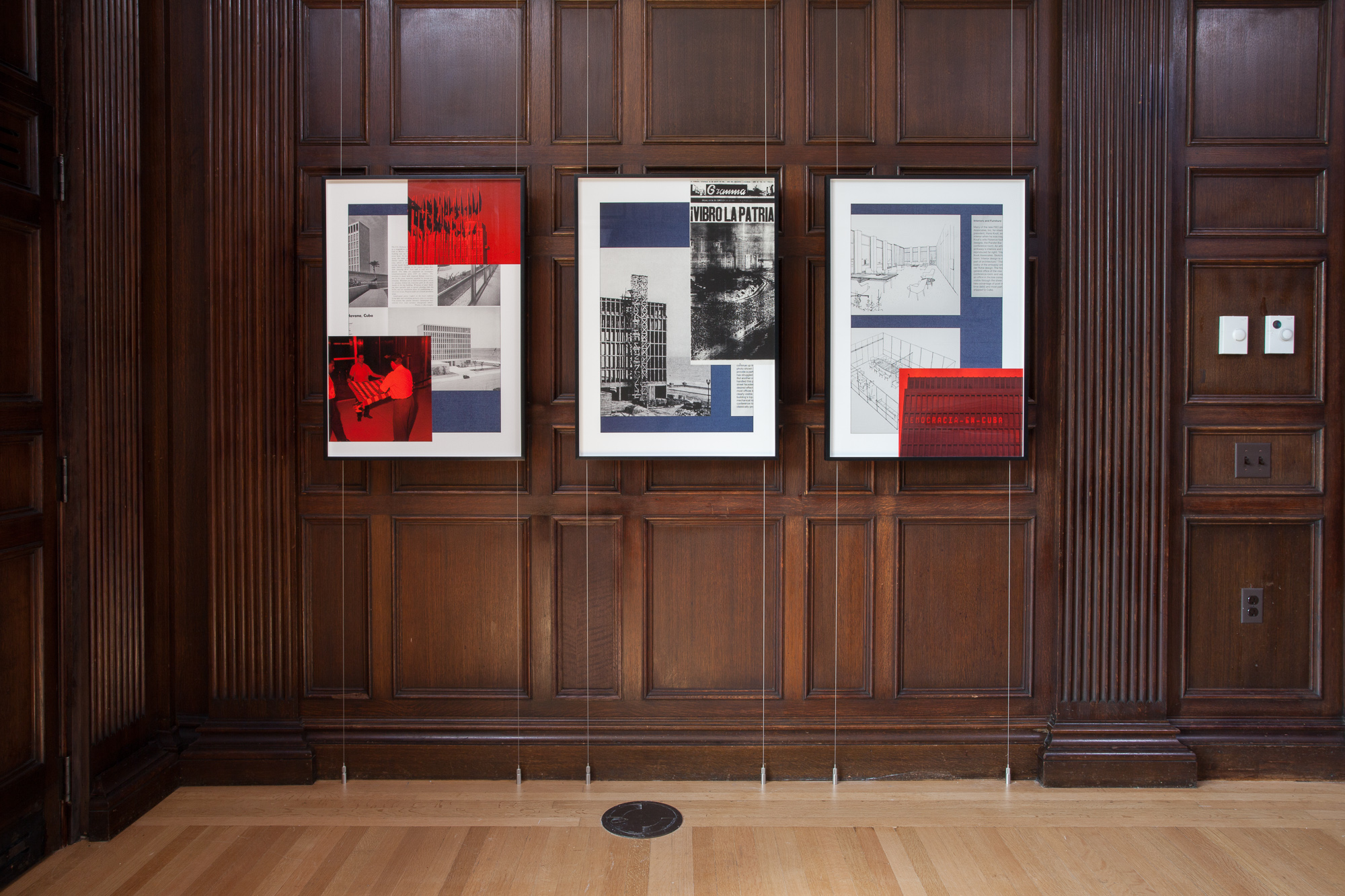 Inside, four tabletop vitrines dominate the space. A closer look reveals two layers of artifacts, each showcasing two different eras. Under the glass lays pre-1961 archival documents, period photographs and architectural models. On top, post-1961 newspaper clippings, billboard printouts and postcards used by both governments mostly for propaganda purposes are free for the viewer to peruse—Gower’s effort to lure them into a deeper engagement with the project. Eventually, material from both eras literally comes together in “Political Services,” collages that provide a behind-the-scenes look to both the artist’s research and the countries’ history. 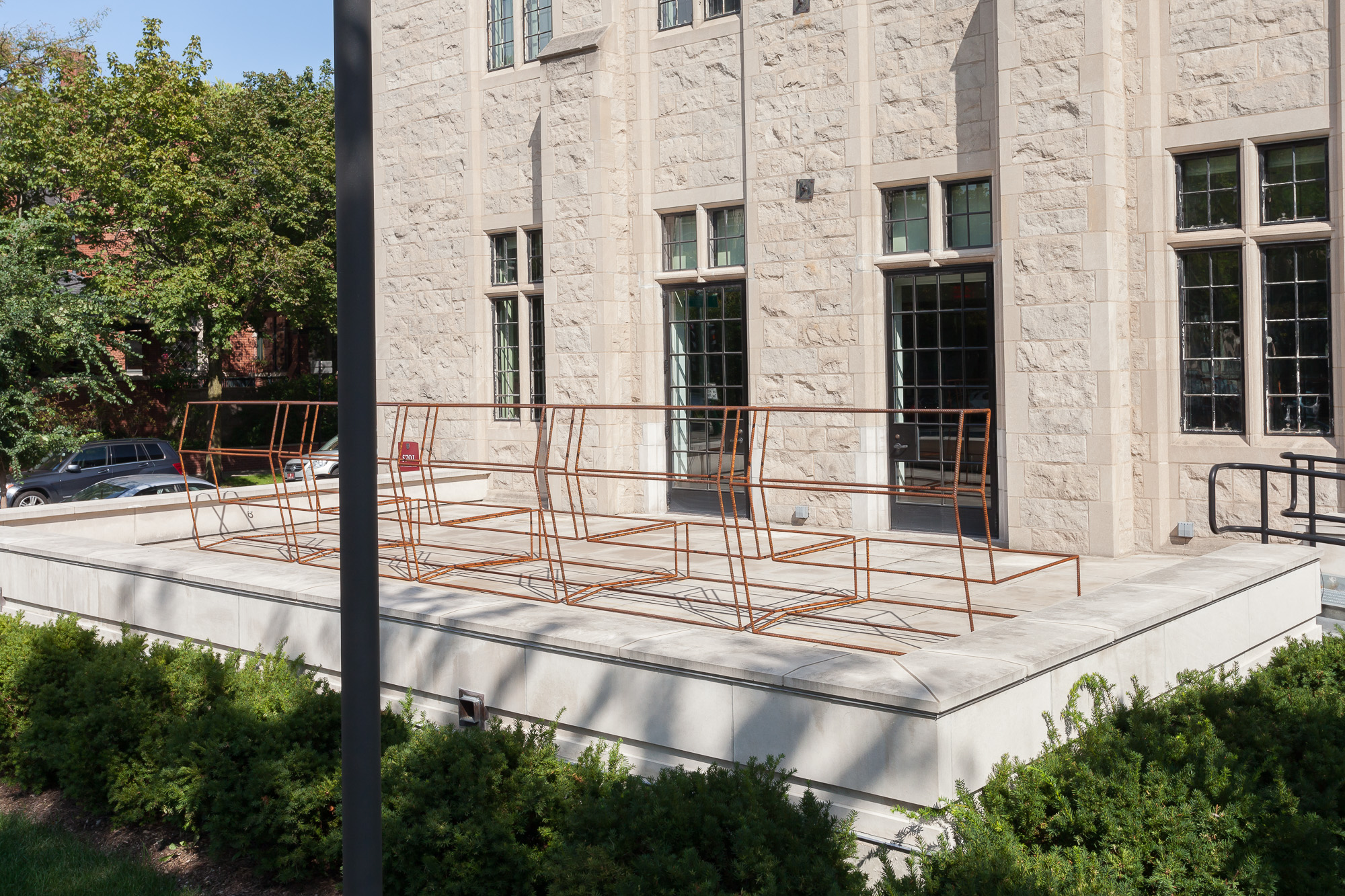 Installed outdoors, on the gallery’s terrace, sits Balcony, a full-scale sculpture of the most heavily criticized part of the U.S. embassy building in Havana: the ambassador’s balcony. The State Department described it as a “Mussolini-style” symbol of American imperialism—a tribune, from which the U.S. government representative could address the Cuban masses, but for Gower it is the most elegant, sculptural form of the building—an intuitive, angled, Breuer-like addition to a quite sober, rectilinear composition. “It naturally translates well into a sculpture,” he says. Yet one cannot help but notice the replica’s ambiguous nature: is it an element under construction—the cherry on top an architectural cake soon to be unveiled—or just a rotting reminder of a glorious past?

Insightful and meticulously researched, the exhibition moves beyond the history of America’s embassy-building program, and into diplomatic architecture at-large—a discipline whose purpose quite simply, is to house, facilitate and represent the mission and interests of the United States within another country, as James Timberlake, founding principal of Kieran Timberlake, who will discuss designing for diplomacy at the Chicago Architecture Foundation later this month, describes it. But that’s just the beginning. “Buildings are living entities. The political, economic, social and foreign relations circumstances are dynamic as well,” he adds. “Prior to World War I, missions were usually housed in previously built, significantly located properties near the country’s seat of government, often in urban areas. The vast expansion of U.S. interests abroad after World War II led to a significant building campaign of new chanceries and embassies and property acquisition as projections of friendship, influence and power,” he says. “The single most difficult aspect of diplomatic architecture, post-9/11, is balancing the security and safety of the diplomatic corps and staff with the representation of the U.S. interests abroad. Questions abound: Does the United States want to project a fortress-like appearance and intent that is recessive and inward looking? Or does the United States express itself with elements of openness, and transparency? The answers to these questions wax and wane and change from one administration to the next, particularly in these volatile, highly polarized, politicized times.” 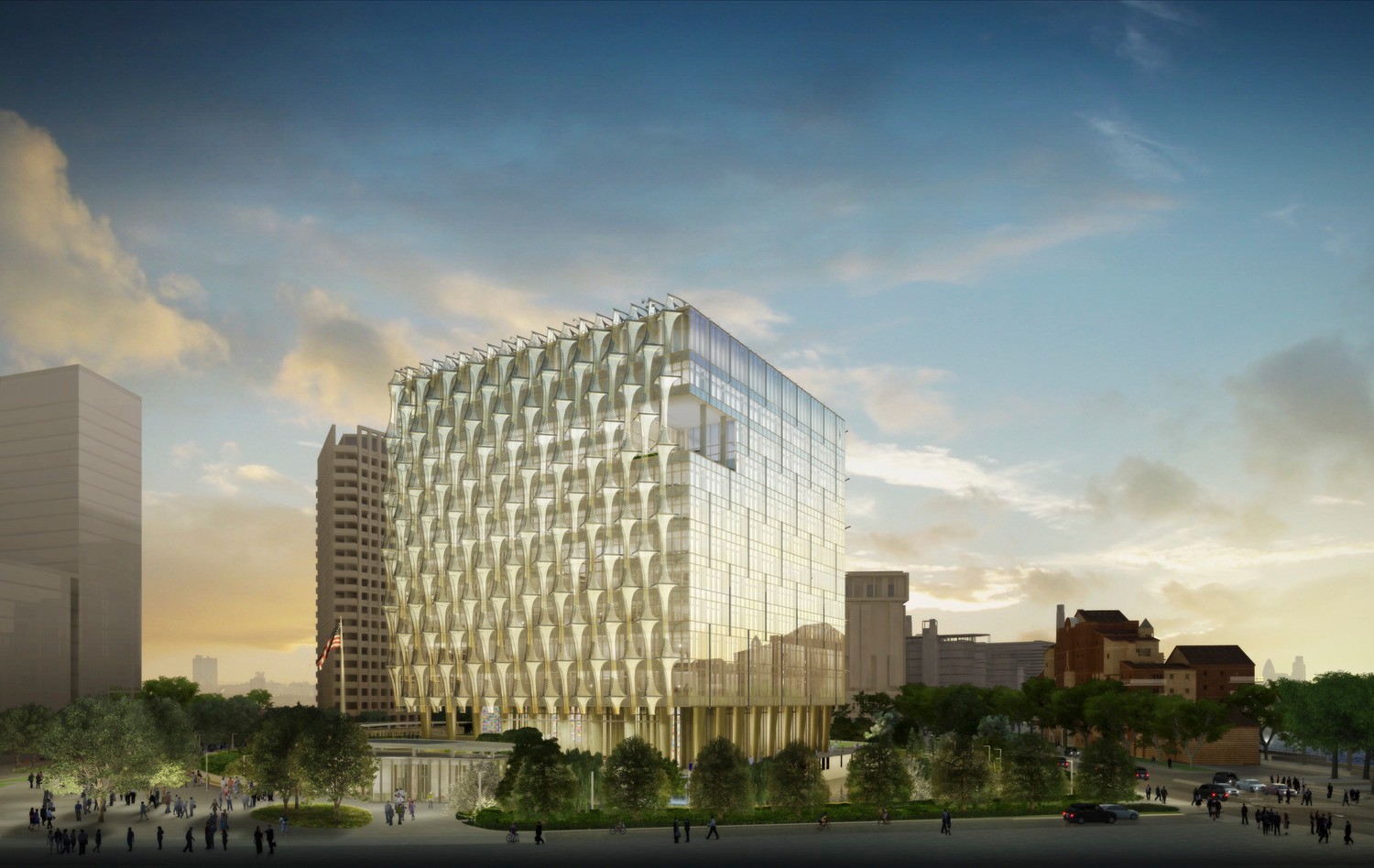 Things become extra-complicated when it comes to a diplomatic building specifically designed to showcase the core values of democracy—transparency, openness, and equality. “By no means are they mere words, or empty slogans,” says Timberlake when asked about the firm’s latest project, the U.S. Embassy in London—a crystalline cube on the bank of River Thames scheduled to open later this year. “Transparency, openness, and equality were essential goals—touchstones that became a way of evaluating elements of the design, and measuring their outcomes.” 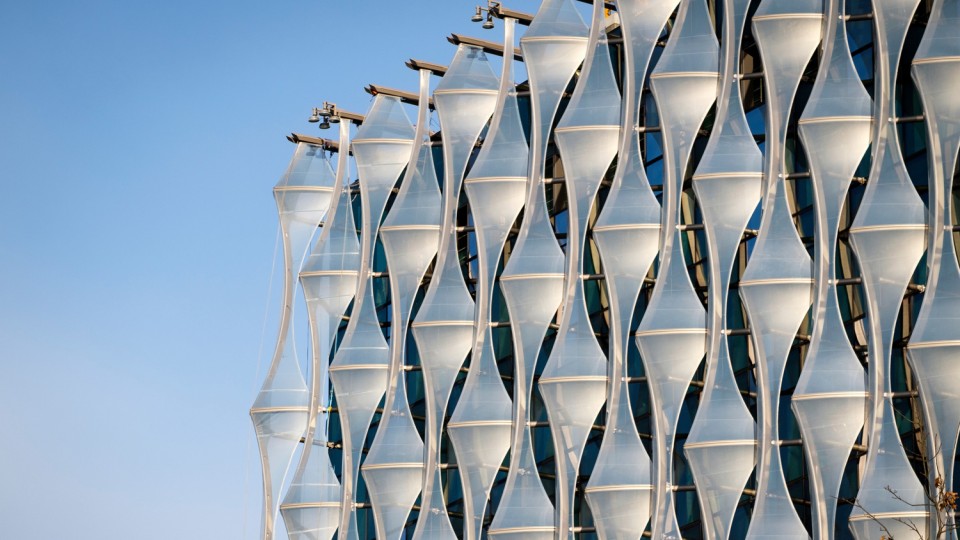 From 1950s Havana to 2017 London, diplomatic buildings have a lot in common, but at the same time are distinctively unique. “Take the microcosm of embassies and chanceries representing other nations in Washington, D.C., as an example,” says Timberlake. “Some blend into the urban fabric, some are strong architectural statements, and yet others serve as links between two nations. Many of the choices made in terms of political interests, expression of wealth, power or influence, or other sorts of statements—such as modernism, sustainability and environment. The same applies in the case of the United States projecting itself abroad.”

By nature, diplomatic architecture is more than sleek, high-security, energy-efficient, buildings. It’s meant to represent nations, their people and values. But moving beyond politics and the aesthetics of politics, architecture is nothing if not destined to create structures that are meant to take on lives of their own.